The Fujifilm X-Pro3 Is a Love Letter to Street Photography

Quite often in today’s world, we’re so focused on editing, sharing, and posting our photos, we often forget to enjoy the simple things like just grabbing a camera, hitting the streets, and seeing what you run into. But with the new X-Pro3, Fujifilm is looking to blend the best things about old-school rangefinders with the convenience of modern mirrorless cams.

As its name suggests, the X-Pro3 is Fujifilm’s third take on a modern rangefinder, following the 16-MP X-Pro1 from 2012 and the 24-MP X-Pro2 from 2016. This time, Fujifilm is streamlining the X-Pro line by ditching the dual magnification viewfinder used on the X-Pro2 for a single, fixed magnification viewfinder, while also beefing up its durability with a new titanium body. Both of these changes should add to the X-Pro3's longevity, which is important, because Fujifilm doesn’t refresh the X-Pro line as aggressively as some of its siblings, typically waiting three to four years between new models.

For the £1,700 X-Pro3, everything starts with its hybrid viewfinder, which combines a traditional optical viewfinder with a 0.52 magnification like you’d get on a traditional rangefinder camera with a 3.69 million OLED electronic viewfinder.

This gives you the freedom to see the world through the camera while still keeping your eyes on the action, and then, just by flicking the lever on the front of the camera, you can switch over to the EVF to see your photo’s exposure and composition in real time. There’s even a third mode that puts a tiny electronic window in the corner of the optical viewfinder so you can see both views at once. 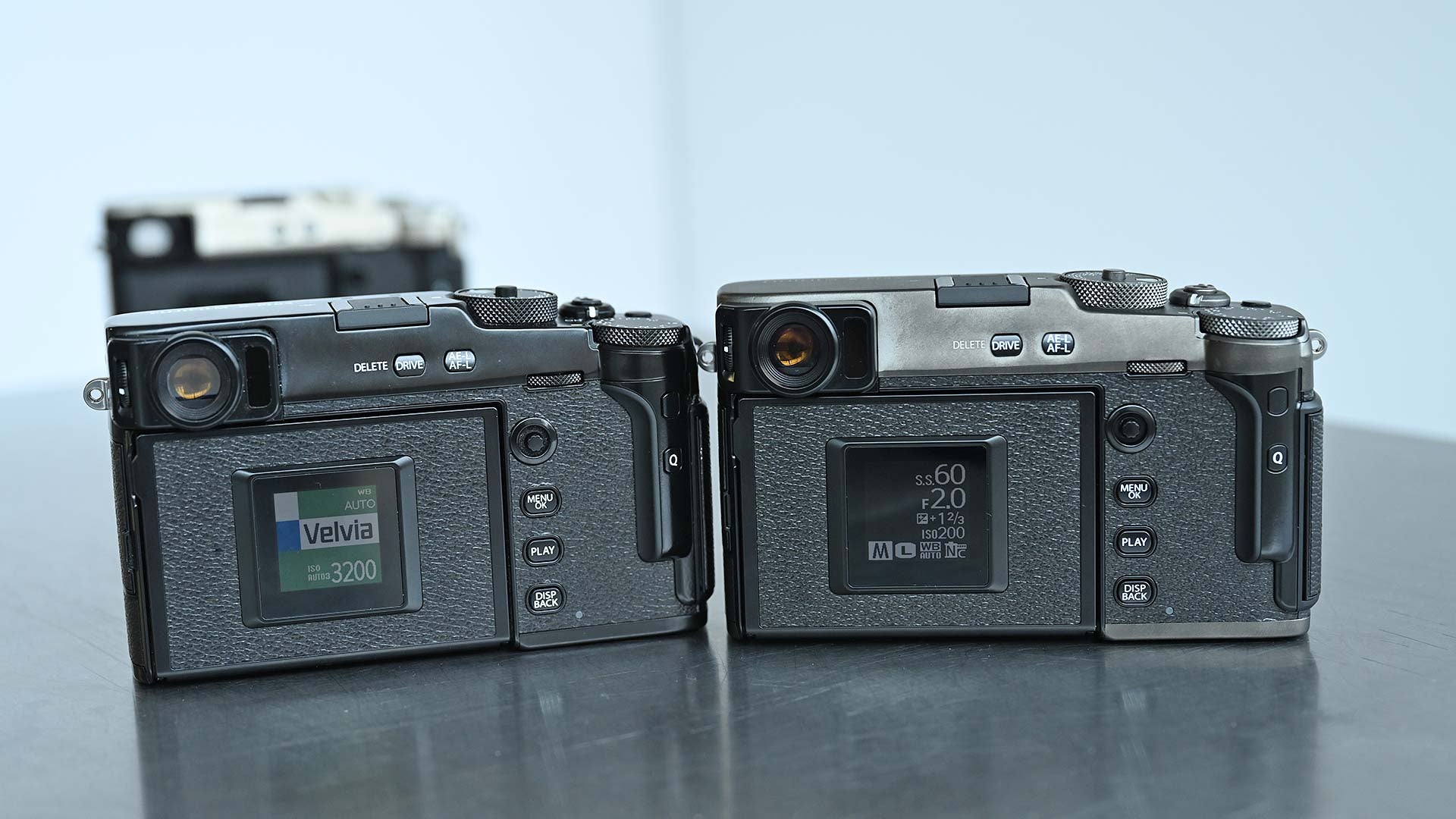 For people used to smartphones and mirrorless cameras that take a WYSIWYG (what you see is what you get) approach to photography, the X-Pro3's viewfinder can take a little getting used to. But when it comes to being able to document your surroundings without completely losing awareness of where you are, Fujifilm’s hybrid viewfinder is a great mix of new and old.

Then on the back, things get a bit stranger thanks to a new e-ink screen located where a camera’s rear display usually goes. This is yet another nod to the analogue film days, as Fujifilm uses it to display which Film Simulation mode the camera is currently in with a vintage look that recreates old-time camera film boxes.

But that’s not all, because you can also flip the e-ink screen downwards to uncover a “hidden” 3-inch LCD touchscreen that you can use to frame low-angle shots, access the camera’s settings, or review previous pics. At this point, some folks might be exclaiming that having to flip the hidden screen downwards just to look at sounds awkward as hell. And it is if you’re trying to use the X-Pro3 like a normal mirrorless camera.

The standard titanium black X-Pro3 is in front, while the two Duratect finishes are in the rear.

But once again, if you’re trying to use the X-Pro3 as if it was something like a Sony A7 III, you’re kind of missing the point. Fujifilm’s goal with the X-Pro3 is to rekindle the joy of taking photos, instead of worrying about which shots came out right and trying to chimp pics in the field. You keep your mind on the action and then review your photos when you get home.

Additionally, while the X-Pro3 can record 4K videos at up to 30 fps because you don’t have a good way of monitoring what you’re shooting, it means the X-Pro3 is almost strictly a stills camera. The X-Pro doesn’t even come with a mic in or headphone out jack, so despite the X-Pro having the same 26.1-MP X-TRANS 4 CMOS sensor and X-Processor 4 engine as its sibling – the X-T3 – if you’re buying this camera to record videos, you’re doing it wrong.

However, the X-Pro does include one upgrade compared to the X-T3 thanks to a phase-detect autofocus system that works down to -6 EV (which is almost pure darkness), which should be quite valuable for anyone hoping to take street photos at night.

Here’s a gallery of sample photos from the X-Pro. All pictures were taken with a 23mm prime lens and Fujifilm’s Classic Neg. film simulation unless otherwise noted.

Here’s a shot taken with Fujifilm’s new Monochromatic Colour filter, with this particular filter having a slight green tint.

Here’s another shot taken with the Monochromatic Colour filter, this time using the reddish tint option.

For the X-Pro3, Fujifilm is also adding two new Film Simulation filters with its Classic Neg. option, and a new Monochromatic Colour filter that can add warm or cool tones to standard black-and-white photos. Additionally, the X-Pro3 now also supports white balance adjustments in 10 Kelvin increments, a new clarity control option, in-camera HDR processing, and an auto-focus range limiter that lets you pre-define a specific distance you want the camera to keep in focus.

Finally, to support the rough and tumble nature of a modern rangefinder camera, Fujifilm gave the X-Pro titanium top and base plates for increased ruggedness, with an optional Duratec coating that Fujifilm claims increases the camera’s durability by ten times compared to standard titanium.

While I only had just under an hour to test the X-Pro3 out during a photo walk in the city, even in that short time, I still got the sense that the X-Pro3 was a camera looking for an adventure. Thanks to its nifty hybrid viewfinder, the X-Pro3 encourages you to walk and shoot, instead of stopping every few feet to compose a pic. Sure, you might miss a shot here or there, but you just keep going, looking for something new to see. 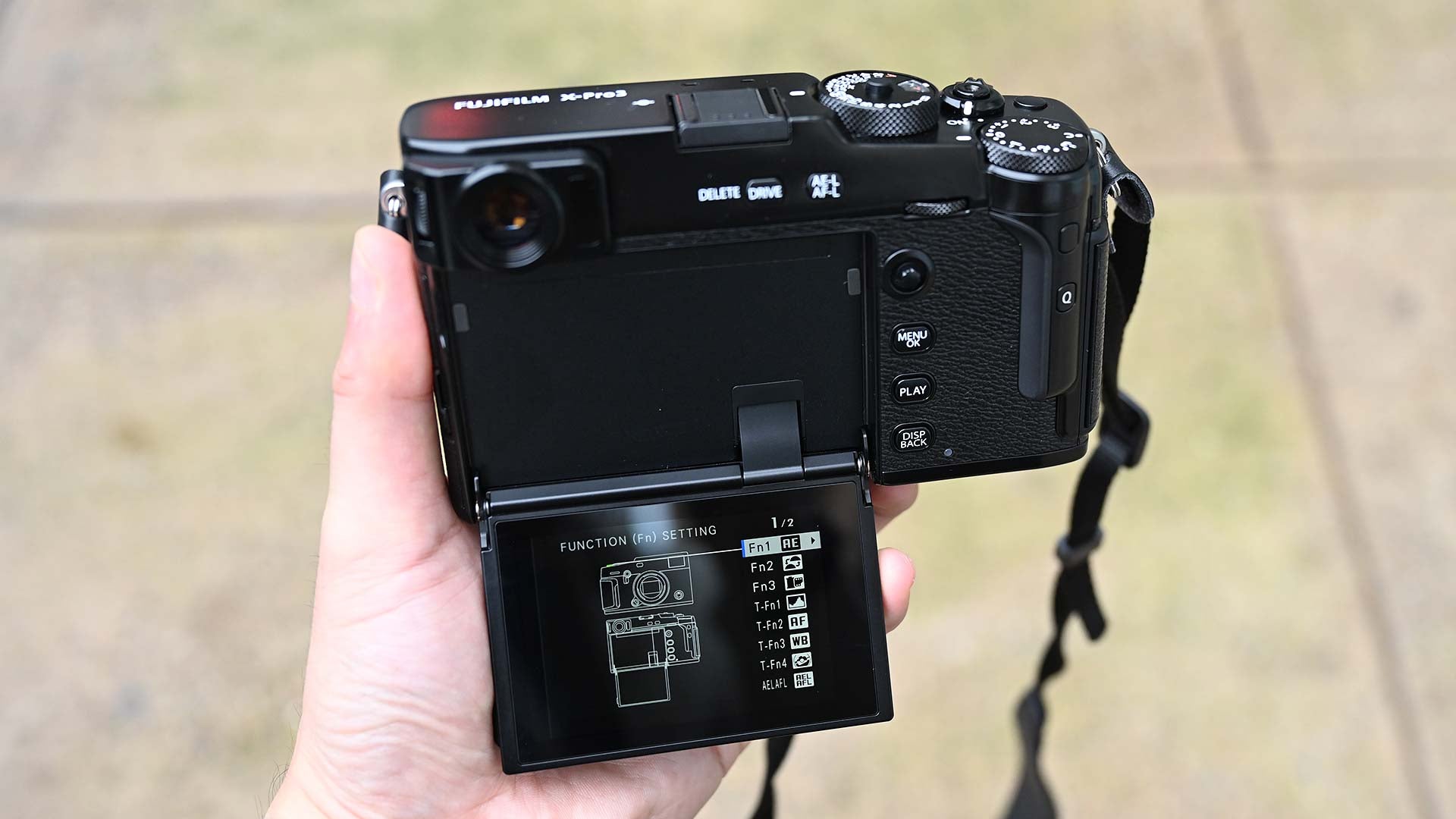 The “hidden” display can be flipped down 180 degrees. And if you need a refresher on the camera’s controls or want to customise a button or dial, you can simply hold the DISP BACK button down for a few seconds. (Photo: Sam Rutherford/Gizmodo)

I also found that if you’re going for a more vintage look, the e-ink screen is super useful for flipping between various filters, with the Q button giving you easy access to pretty much every setting you could need. That said, sometimes, I felt like I wished the X-Pro3 had a slightly more pronounced grip, though with a weight of just 17.5 ounces (with a battery and SD card), the X-Pro3 never really becomes a serious burden.

And while the X-Pro3 doesn’t come with in-body image stabilisation (which Fujifilm claims would have added at least 3 to 4mm to the camera’s height and increased its price), I never really felt like the lack of IBIS was hurting the experience. Also, while £1,700 is a lot for a somewhat single-purpose camera, the X-Pro 3 is still a much more affordable alternative to other rangefinder cameras like the £6,000 Leica M10.

The X-Pro3 isn’t meant to be the techiest or most sophisticated camera on the market, but it is a whole lot of fun.

The Fujifilm X-Pro3 will be available in black titanium for £1,700 (body only) starting in late November or with Fujifilm’s special Duratect coating (in black or silver) for £1,880 starting in mid-December.