Scientists have anticipated the arrival of an object from outside our solar system for decades, but the first documented one, 1I/‘Oumuamua, went against all expectations: It was an asteroid rather than a comet. The second, named 2I/Borisov and spotted this August, seems much more in line with our expectations.

“‘Oumuamua looked like an asteroid, but Borisov is a comet – it has a long, defined tail and a coma around the middle,” study author Michał Drahus, astronomer at Jagiellonian University in Poland, told Gizmodo. “This is important, because many have speculated that interstellar space should be occupied mostly by comets.”

Generally, asteroids are rocky objects that form closer to their parent star. Comets, instead, are icy objects that form farther from their star. The two differ in elemental composition, as well as in how they appear when seen from Earth; when a comet gets close to an energy source like the Sun, it heats up, and the ice turns into gas and dust, turning into an atmosphere-like coma and a fuzzy tail. Astronomers have assumed that interstellar objects would be more like comets, since, logically, a solar system would be more likely to lose its outermost objects to space.

But when the first interstellar object, ‘Oumuamua, arrived in 2017, it totally surprised scientists. It seemed to lack a coma or a tail (though debate continued for awhile as to whether it was really a comet or an asteroid). 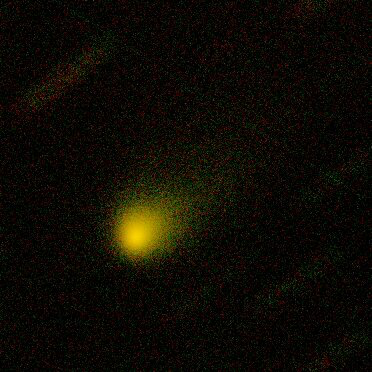 When amateur astronomer Gennady Borisov spotted the new object on August 30, other astronomers around the world eagerly followed up to see whether the second interstellar object would hold more surprises or whether it would prove ‘Oumuamua to be an outlier. One team of scientists from Poland and the Netherlands observed the object with the William Herschel Telescope on the Canary Islands and the Gemini North Telescope in Hawaii. And aside from its orbit demonstrating that it originated from outside the solar system, comet 2I/Borisov was otherwise “unremarkable,” according to the new results published in Nature Astronomy.

“Borisov is an object that looks surprisingly familiar,” Drahus told Gizmodo. Besides its unusual trajectory through space, the object is otherwise indistinguishable from typical solar system comets – which makes ‘Oumuamua even more interesting, since it was distinctly unfamiliar.

But these are only initial estimates. There are plenty of other measurements scientists hope to take. Spectroscopy, or the wavelengths of light the object emits, as well as observing how its brightness changes over time could clue them into the kinds of material in the comet. Thankfully, the comet was caught on its inbound approach, which will give scientists more time to study it before it leaves the solar system.

Comet 2I/Borisov certainly won’t be the last interstellar object we see. Scientists estimate that human technology is capable of spotting one interstellar object per year, according to the new paper. Hopefully we’ll learn a lot more about these strange objects soon.