The Pixel 4 Is Redefining the 'Smart' in Smartphone

After three generations of Pixel phones, Google wants the Pixel 4 to be the start of a new era.

You can see this throughout the phone thanks to a design that’s ditched the two-toned colour scheme of previous Pixels for something that bucks current trends of sleek metal and glass. Instead of colour-matching the Pixel 4's metal frame with the phone’s glass back (on the white and orange models), Google kept the same matte black band for all three colour options.

Then Google put a big square camera module in the top left corner to highlight one of the Pixel line’s most important and defining characteristics while retaining the brightly coloured power button from previous handsets. When combined, it almost makes the Pixel 4 look like it jumped out from the pages of a comic book, with a bold outline separating the phone from the rest of the world. 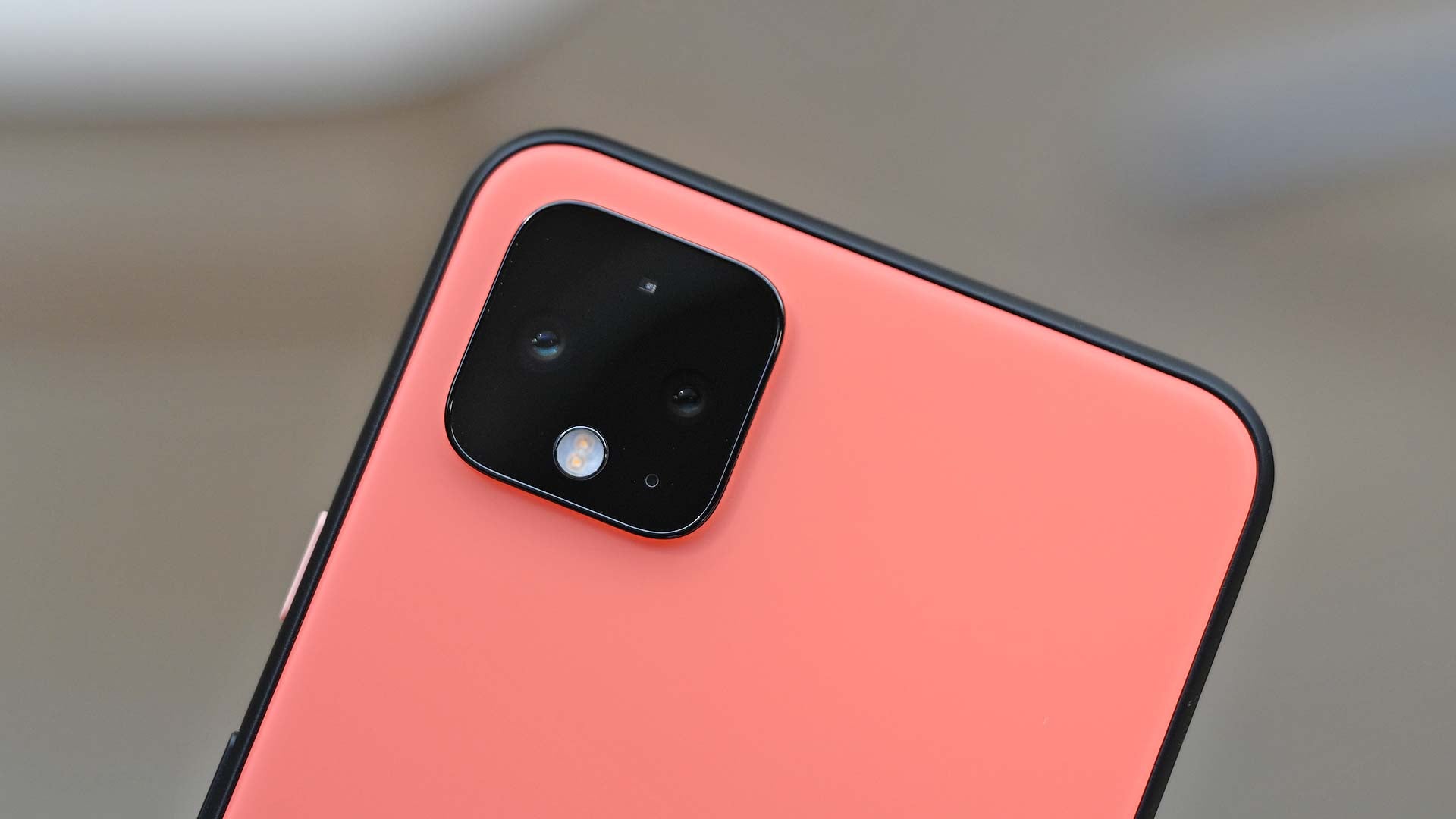 And yet on the inside, it feels like Google is eschewing the traditional definition of a smartphone by making something that’s as concerned with being thoughtful as smart.

The biggest example of this is Google’s new Motion Sense gesture recognition, which uses tiny radar chips (called Soli) embedded in the top of phone to track nearby objects like your hands or detect if anyone is nearby.

With a simple swipe, you can tell the phone to skip to the next song in your playlist. But even more impressive is how the phone uses this object recognition in more nuanced situations. If you leave the Pixel 4 on a table and walk away more than 0.6 metres (which is the max range of Google’s Soli radars), the phone will disable its always-on display to save battery life. After all, if no one is around, why waste power showing info no one can see? 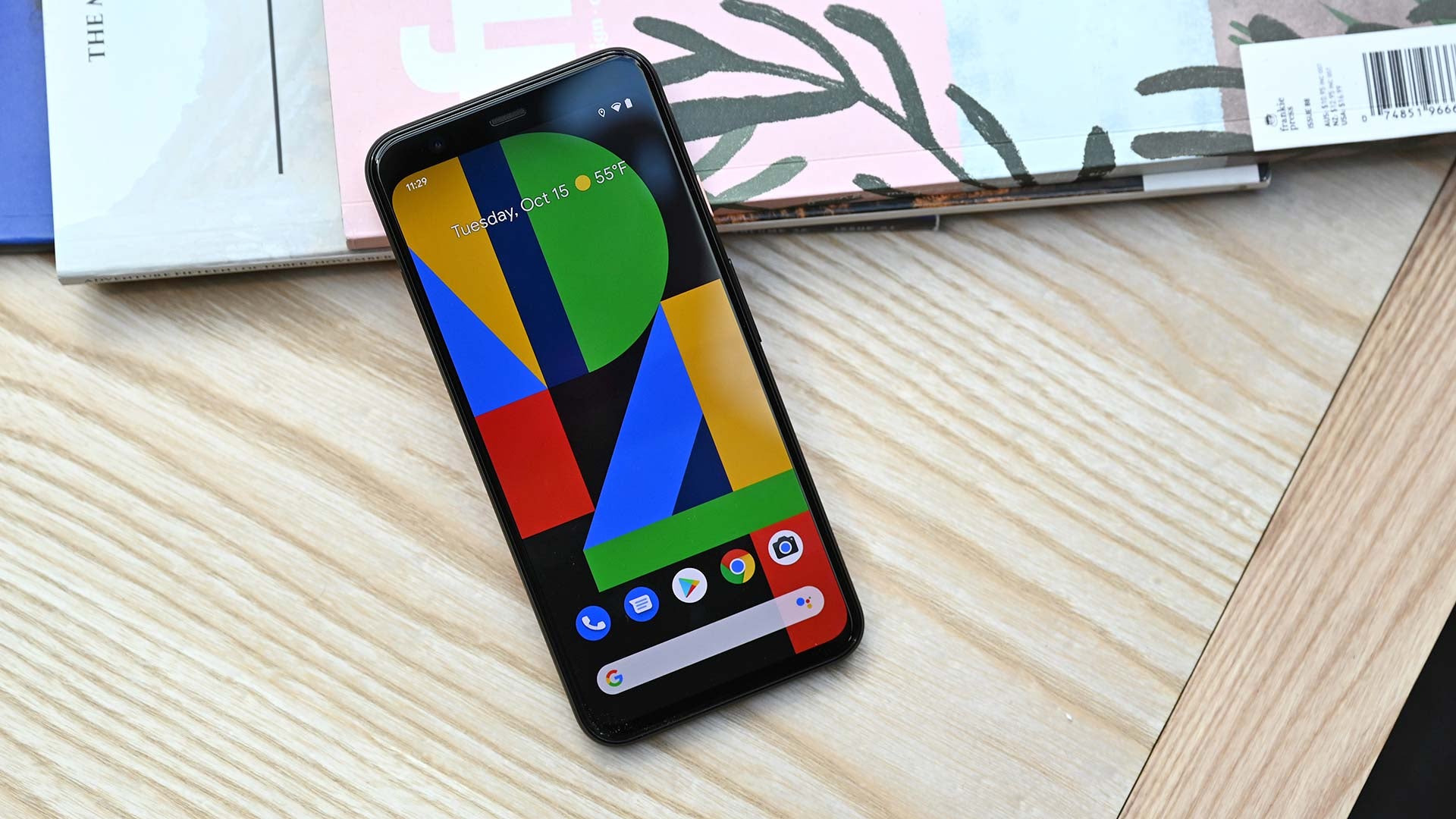 It’s a similar situation when it comes to using hand motions to silence an alarm or phone call. You can wave to dismiss it, but even if you simply reach for the phone, the Pixel 4 will sense your hand and lower the phone’s volume. The point of the alarm is to get your attention, not annoy you and everyone else around you, so once the phone has accomplished its task, the noises get turned down.

Google even uses Soli to make the Pixel 4's improved facial recognition blistering fast, by using motion to wake up the phone’s 3D dot projector, so that even before you’ve fully raised your arm, the phone is probably already unlocked. 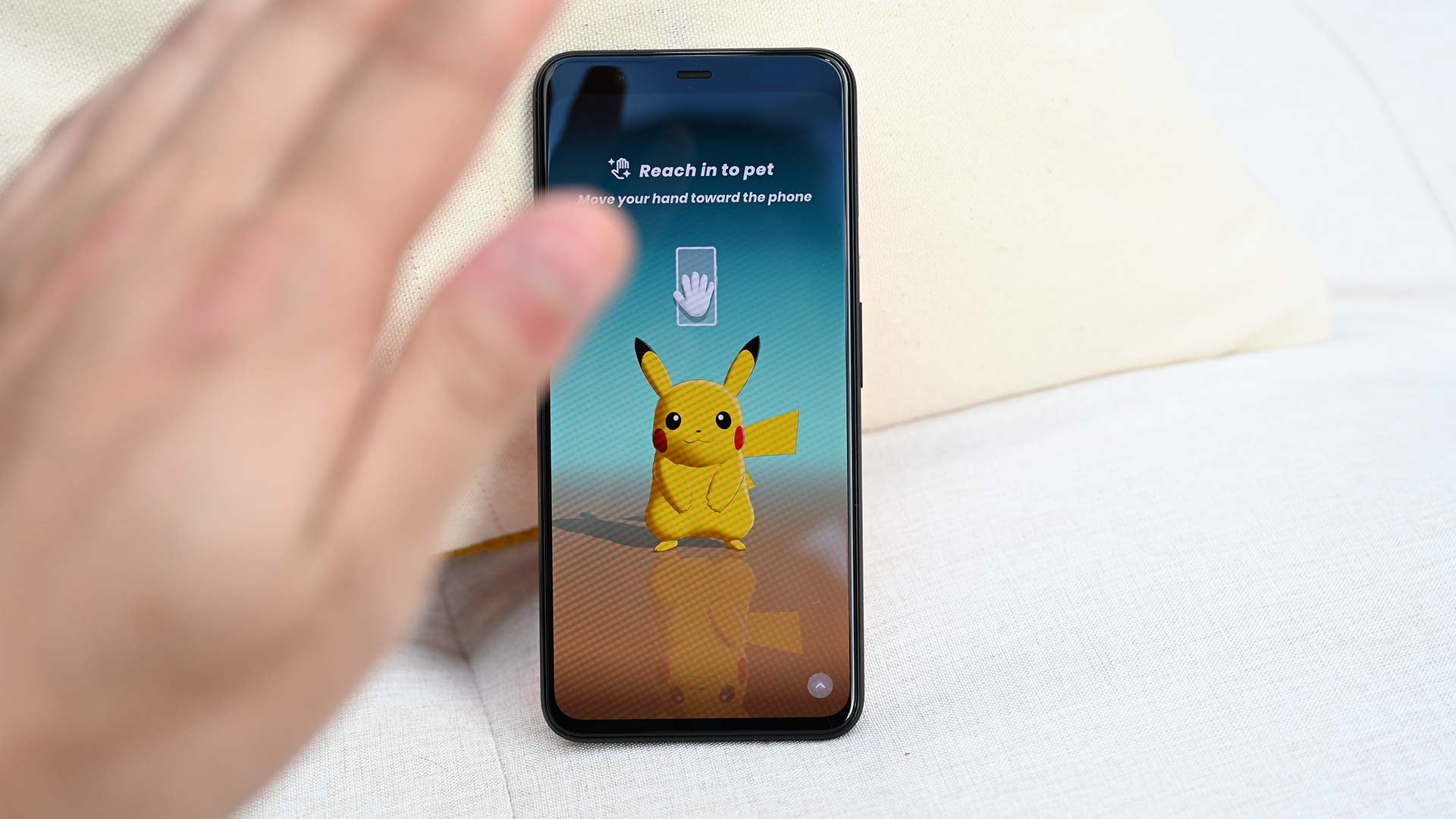 Thanks to Soli, now you can pet the damn Pikachu. (Photo: Sam Rutherford/Gizmodo)

This use of gesture recognition is entirely different from the clunky Air Motion feature on the LG G8, to the point where it could even redeem people who may have felt burned by LG’s attempt at making gesture recognition a thing earlier this spring.

As for the Pixel’s camera, adding support for astrophotography in Night Sight, Live HDR+ video recording, and better details for portrait mode are nice, but these things require more in-depth testing to really evaluate. That means for now, the most exciting new camera feature is Google’s dual exposure controls, which after years of Pixels not having manual camera settings, finally give users a way to adjust their photos without opening a separate app. 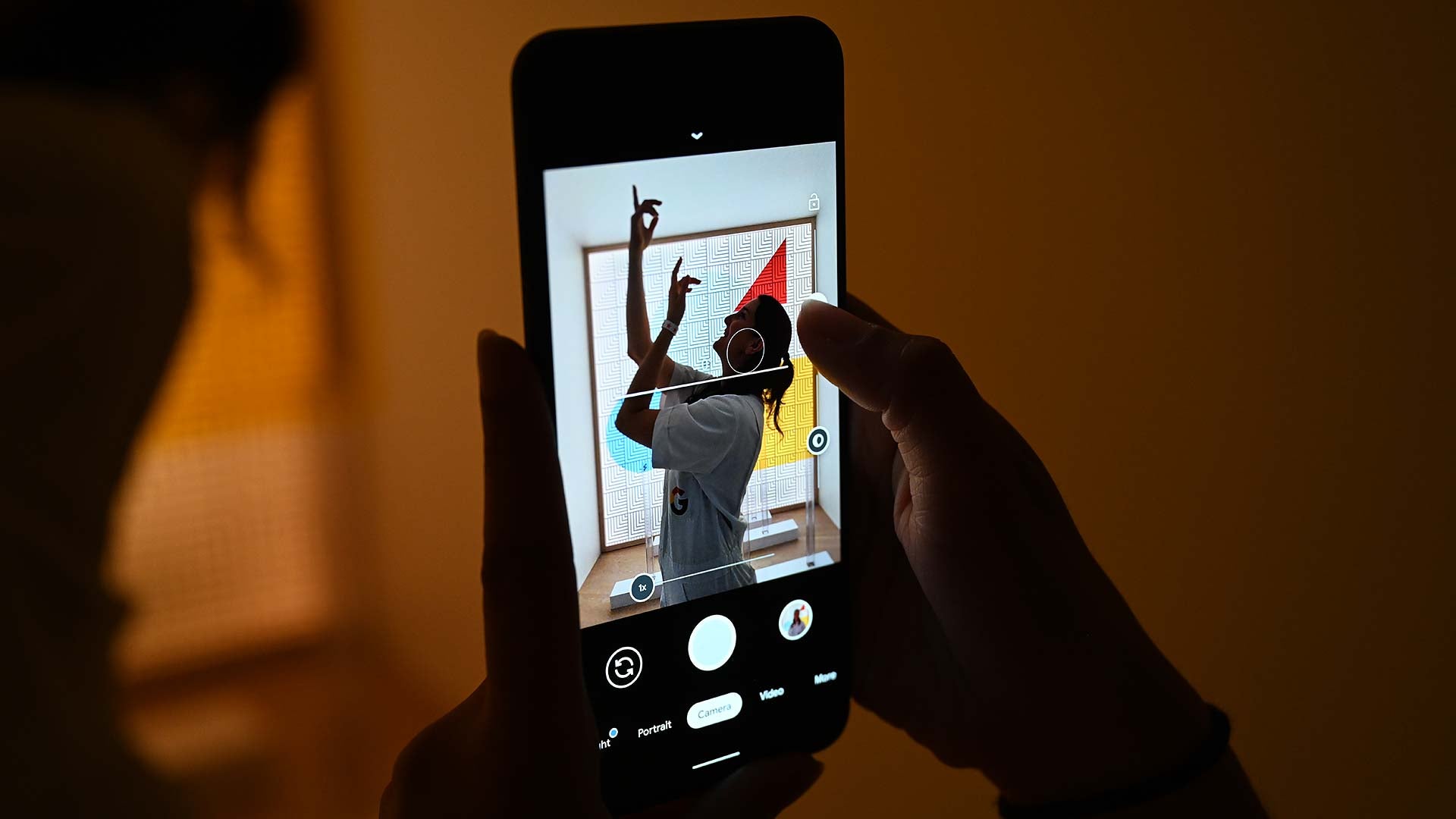 Look how dark it was in the demo room compared to what you see in the Pixel 4's camera app. (Photo: Sam Rutherford/Gizmodo)

The thoughtful thing about the Pixel 4's dual exposure controls, is that instead of giving you something nerdy like a histogram, all you get are two little sliders that are surprisingly powerful. Even without knowing what the sliders control, you can avoid blowing out backgrounds or underexposing a subject with just a couple of quick taps. There’s no photo training required (though a little know-how always helps).

Despite the lack of quality time with it, I still found the Pixel 4's new astrophotography mode very easy to use. As long as its dark enough and the camera is still, turning on Night Sight will automatically enable the astrophotography setting. Once you press the shutter, you get a simple countdown (up to 4 minutes and 30 seconds), while little pop-up notifications give you info about what the phone is doing. You can stop capturing the shot anytime you want – in case you need to adjust your composition or you think the image is good enough as is. You’ll know because the phone generates the image in real-time. 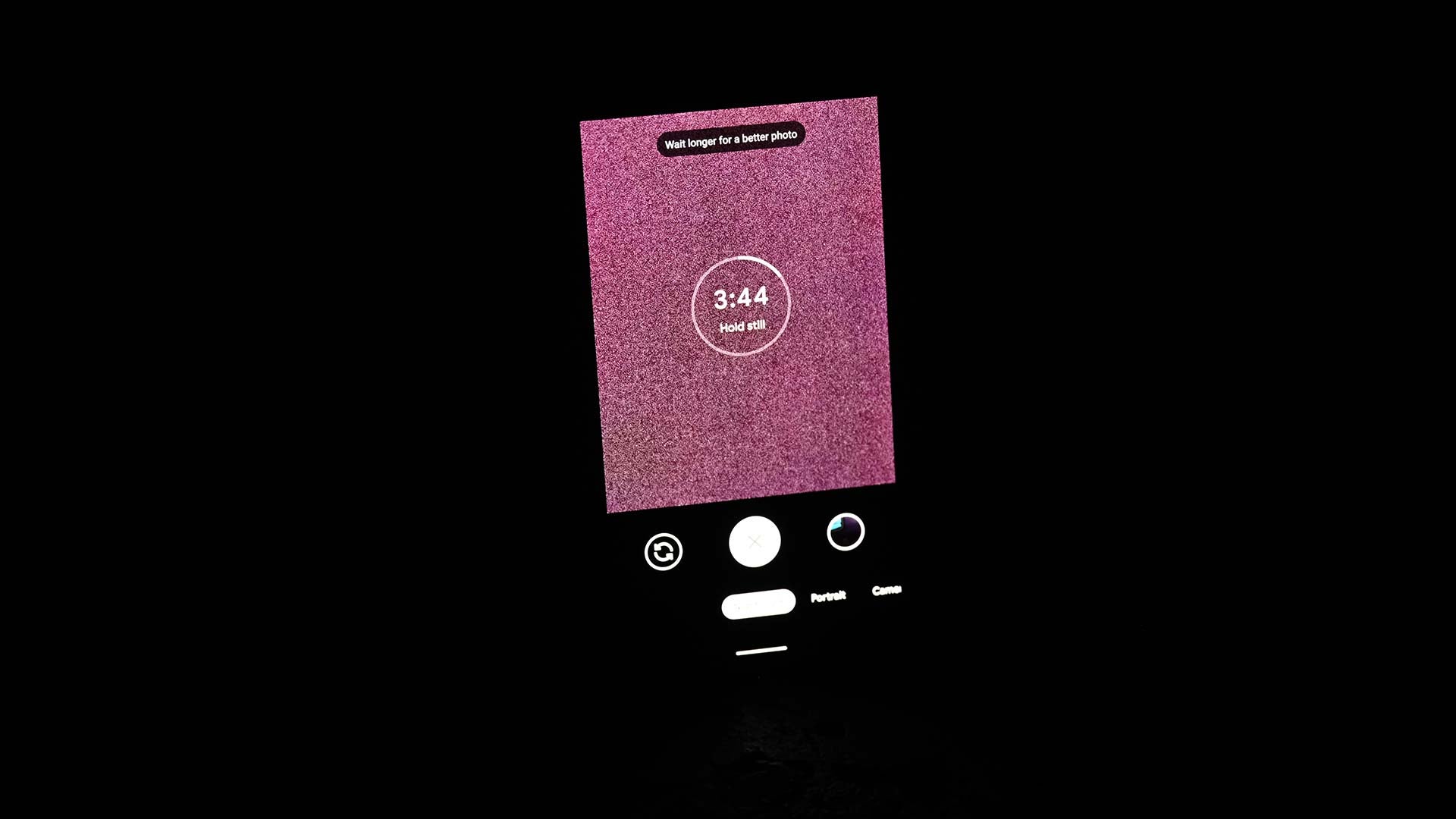 Unfortunately, there wasn’t much to capture as the only place dark enough to use the Pixel’s 4 astrophotography mode was in a tiny windowless room. (Photo: Sam Rutherford/Gizmodo)

Night Sight’s astrophotography mode isn’t the only Pixel 4 feature doing number crunching in real-time. Thanks to the new Live Transcribe feature built into the Pixel 4's Recorder app, parsing conversations for little nuggets of info might have just gotten a whole lot easier. Even when I tried out this feature in Google’s noisy demo room, the Pixel 4 practically nailed it, even correctly capitalising Gizmodo in the text. The phone’s only mistake was writing “transcribed” instead of “transcribe,” which for me is pretty forgivable.

That said, I do have two misgivings about the Pixel 4. This year, both Samsung and Apple added triple cameras to the Galaxy S10/Note 10 and iPhone 11. And yet, the Pixel 4 still has to make do with a primary and 2x telephoto camera, but no ultra-wide angle cam. Actually, it’s even worse than that, because in 2019, almost every major phone maker including LG, OnePlus, Huawei, Motorola and more released phones featuring a wide angle camera. And with Google’s use of a wide-angle selfie cam on last year’s Pixel 3, Google clearly knows how to use them and what the benefits would be.

This makes not including an ultra-wide angle lens on the Pixel 4 feel like a poor decision, because despite the Pixel 4's awesome image quality, it’s still one camera short of truly matching the capabilities of its biggest competitors. (I must add, from my short time using the phone so far, pics taken with new 2x telephoto camera combined with Super Rez Zoom look amazing.) 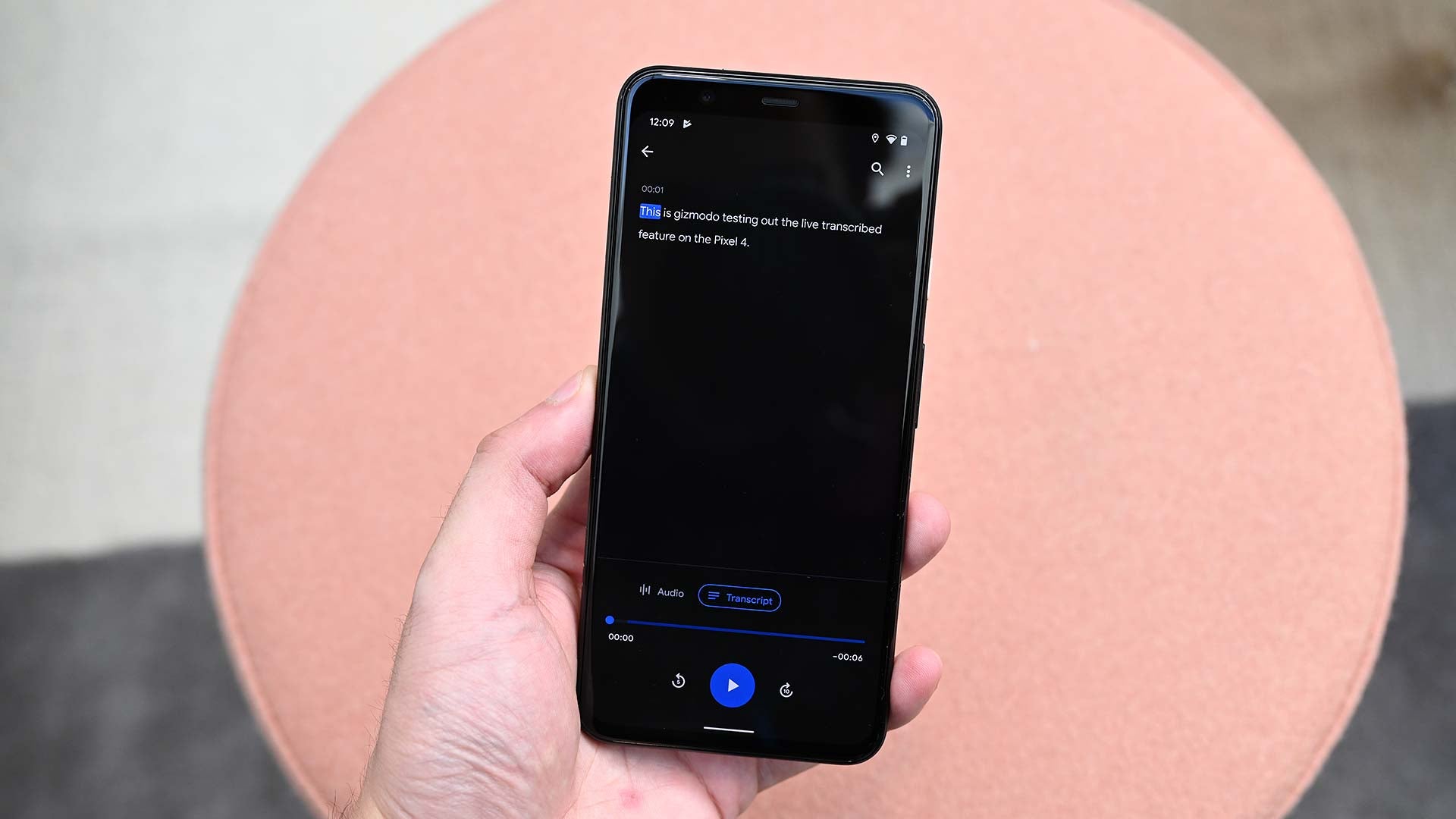 The other concern is the standard Pixel 4's 2,800 mAh battery. It is smaller than the 2,915 mAh battery on the Pixel 3, which lasted 10 hours and 50 minutes in our battery test last year. When I asked Google’s VP of Product Management Brian Rakowski about the Pixel 4’s smaller battery, he assured me that Google is confident in the smaller phone’s ability to last a whole day, though he also recommends that power users would probably want to opt for the Pixel 4 XL.

This makes sense as heavy phone users tend to gravitate towards larger devices, but for people who want a small, powerful, and long-lasting handset, I sort of wish you weren’t forced to make that choice.

Still, even with these two quibbles, the Pixel 4 is shaping up to be not just the smartest, but also the most thoughtful phone on the market. But I won’t know for sure until without spending some more time using them, so stay tuned for a full review coming soon.