The Walking Dead Reveals the Strange Origin of the Whisperers

It’s the question that philosophers in the zombie apocalypse have asked for ages: What makes a person cut off the face of a corpse and wear it as a mask in order to hang out with dozens, if not hundreds, of the dead? We have our answer, and it’s very, very Walking Dead.

Much as in the second episode of the second half of season nine, “We Are the End of the World” wants to give more background to the zany new threat faced by the colonies in the present. But while “Omega” examined the moment that Alpha went from being part of civilisation to abandoning it, this episode focuses on the first meeting between Alpha and the very tall, gravelly-voiced man who would become Beta, which is effectively the origin of the Whisperers, too.

The flashbacks are set seven years ago (which should mean three years or so after the events of “Omega,” based on the 9+ years total that have passed since the zombie apocalypse began). The woman who would become Alpha (Samantha Morton) has learned the trick of walking among the dead, which is shambling while growling and wearing a dark hoodie. Young Lydia is shambling too, but she’s looking pretty much straight down while wearing over-the-ear earphones to keep her from constantly hearing the growls of the undead. It’s pretty damn smart, and only stops working when a zombie bumps into her and knocks them down, right as a nearby woman is getting eaten alive and screaming. The terrified Lydia screams, forcing Alpha to drag her into a nearby sanitarium.

Inside they find, uh, Jason Vorhees – well, a reasonable facsimile. It’s a very tall man wearing a ski mask and wielding a giant machete, which is a lovely TWD-style twist. But the man hesitates to kill her and her daughter, even allowing them to stay the night, and Alpha knows she can dominate him. She even rifles through his food supplies, humming a song even when he orders her to stop. It turns out the two of them have a lot in common, which is to say they’re both bonkers. “The dead are free,” pre-Alpha tells him reverently. “I like the song of the dead,” pre-Beta says. “It’s the only song I never want to end.” When the two go on a small zombie murder spree later, she dubs him B – not a name, since the dead don’t have names, but a letter – and herself A. Then she explains her post-apocalyptic philosophy, as she cuts out the zombies’ guts to save for later (to cover herself with to safely walk among the dead). “There’s only two kinds of people left in this world: Ones brave enough to walk with the dead, and everybody else.”

Meanwhile, A also “comforts” Lydia, telling her if she doesn’t get brave she’ll be abandoned, and then demanding her kid stop referring to her as “Mama.” The very young Lydia does her best, first refusing to sleep with her bunny doll and then coating herself with the zombie guts her mother had collected to try to hang out with some zombies all by herself. A worried A tries to find her – clearly full of more maternal feelings than she’s letting on – and finds B’s room, where the walls are covered with photos he’s scratched the faces off of, as well as walls covered in graffiti of various sanity levels. B arrives just in time to see A kill a zombie that shambles into the room, and screams, “No!” 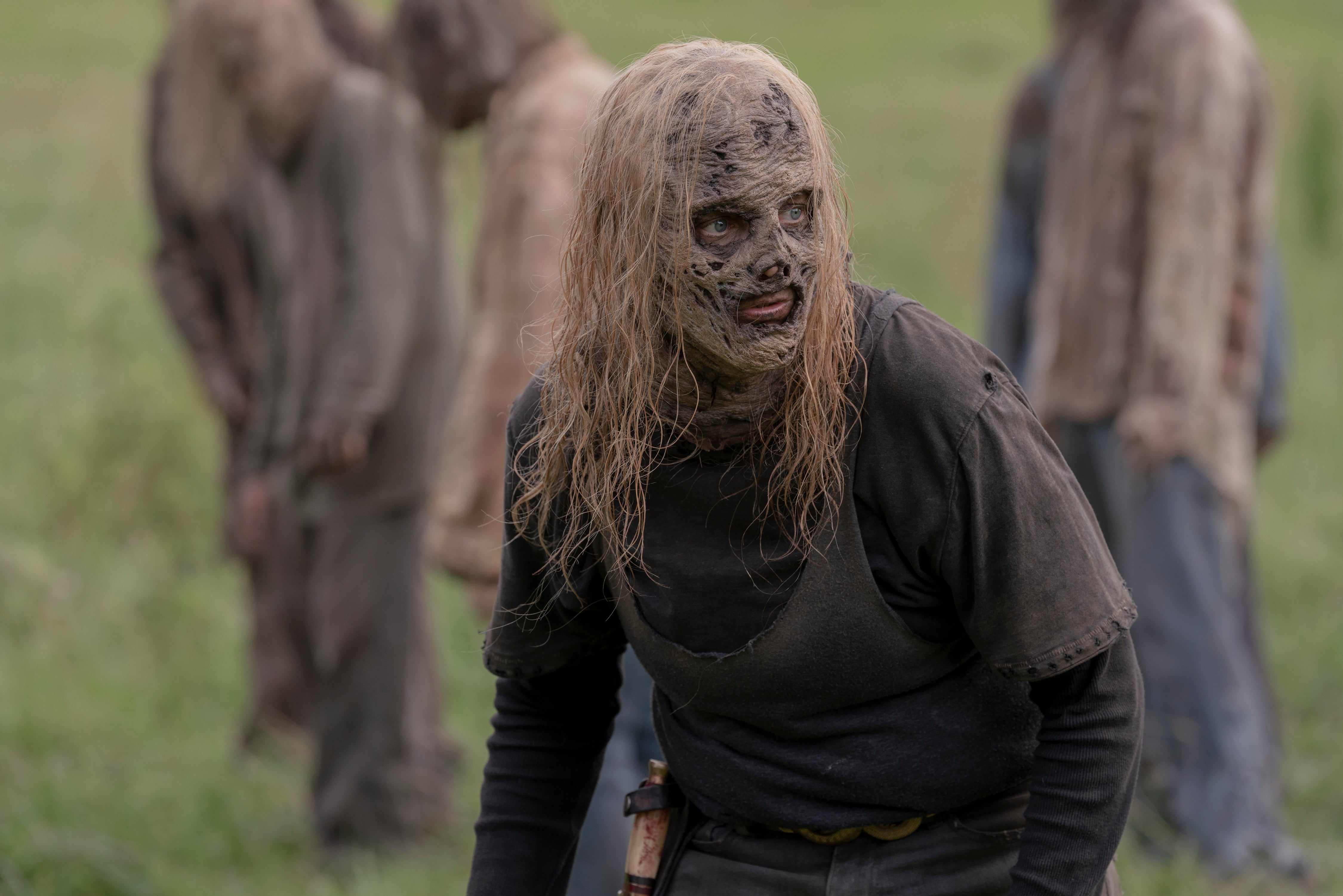 All this is of course intercut with the very recent past (more or less concurrent with the first episode of the season), where Alpha also ends up wrestling with her maternal instincts. It begins when she tells Beta to gather more zombies for their mega-herd and to bring the sisters with him. One is named Frances (well, someone who was called Frances before she abandoned her name to join the Whisperers) and the other is unnamed, so I’ll just call her Sister for the moment.

While wandering among the zombies they’ve collected, Frances starts hearing an imaginary baby cry because it turns out she’s the one who was forced to abandon her own baby last season during the Whisperers’ confrontation with Hilltop. She’s still traumatised by her loss and has a small breakdown. The sobbing attracts the attention of the zombies, forcing Beta and the sister to escape and leave the herd they collected behind.

Back the Whisperer camp, Beta is very much about to murder Frances when Alpha stops him and grabs the girl for a tête-à-tête. The terror of what Alpha is going to do to her snaps Frances out of her funk, and she screams, but all Alpha ends up doing in holding her as she cries and repents. Later, when Beta realises she let Frances live despite her weakness, he confronts Alpha, demanding to know why the girl wasn’t punished, why haven’t they destroyed Alexandria and the other colonies yet, and why Alpha keeps leaving the camp at night. He gets no real answers.

The next day, the Whisperers are on the move when they see the burning satellite streak through the air, agitating the zombies something fierce. This problem is compounded when Frances, despite last night’s claim she’s fine and super-glad she abandoned her baby to die, sees a zombie wearing an empty baby carrier – a pretty chilling sight – and freaks out. Screaming, she leaps onto the zombie’s back for some unfathomable purpose, and the zombies realise there’s food hiding among them. A few Whisperers get eaten, and Alpha is grabbed by zombies trying to get to the wailing Frances until Sister runs into the crowd, throws Frances to the ground to be killed/silenced/eaten, and pulls Alpha out of danger. 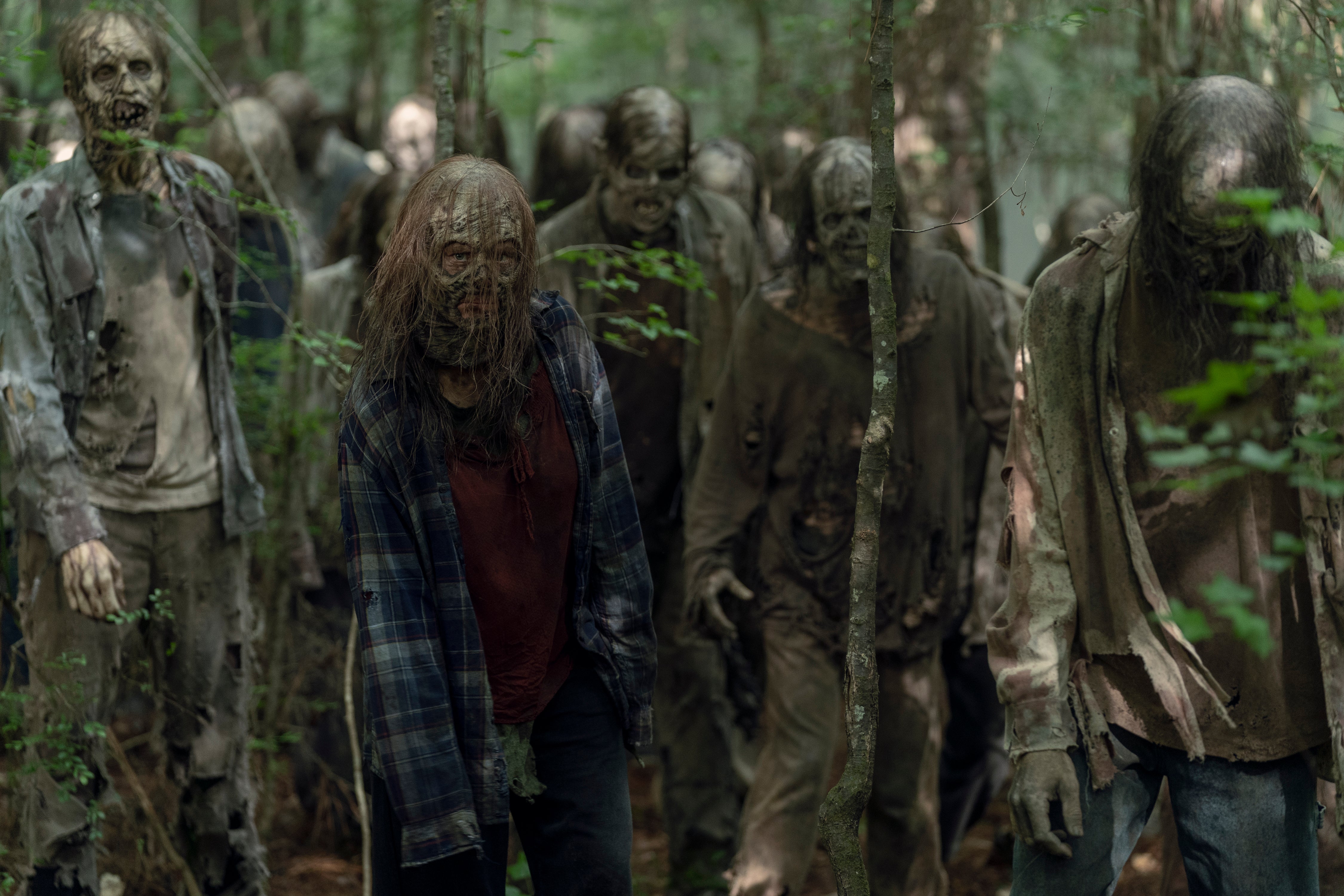 Gamma (Thora Birch) either before or after she became Gamma. Look, there was a lot of zombie shambling this episode. (Image: Jace Downs/AMC)

Killing your own sister to save the pack leader is exactly what the Whisperers are all about, and Alpha could not be more thrilled with Sister and dubs her Gamma, which makes her the third-ranking member of the group. (This is probably the time to mention she’s played by Ghost World’s Thora Birch.) Afterwards, Beta is genuinely mad at Alpha for being so calm about all the mayhem and goes to confront her, only to discover she’s gone to their old camp – where he finds Alpha holding Lydia’s bunny doll. Beta realises several things at once: Not only did Alpha not kill her daughter, as she’d sworn she’d done, but she still wants Lydia back in defiance of the Whisperers’ code.

Alpha, for the very first time, looks weak – she is weak. She pleads with him not to tell the others her daughter is alive. “She was dead to me the minute she was born,” she yells, trying to convince herself as much as Beta. It all builds to a frenzy where she destroys the camp, which is intercut with an equally upset pre-Beta in the past, destroying his room in grief and anger. “I know you better than you know yourself,” A tells him just as he’s about to kill her. “You are not broken. You were made for this world.”

When Lydia (who survived her jaunt) bursts in, yelling to B that her mum is trying to save him, he collapses by the corpse, moaning how he can’t leave him. It’s clearly the other guy from the faceless photo A saw, someone B cared about. That’s when A and B make a fateful decision together. “You won’t have to,” A tells him enigmatically, and B begins to cut off the deceased loved one’s face. The camera cuts to the present, indicating it’s the half-rotted skin-mask Beta is wearing even now.

Alpha, once she collects herself, tells Beta it’s time to go back and destroy the colonists, to teach them a lesson about how their civilisation is a mere fantasy. All that’s left is for Alpha, on the return march, to peel off and spot Carol across the chasm, syncing up with the end of last week’s episode.

Although I wish we’d gotten a little more momentum on the season’s main conflict before a full-episode flashback, “We Are the End of the World” is a very good episode of The Walking Dead. Samantha Morton does a particularly fantastic job as Alpha, somehow finding the perfect middle between her previous flashback as a domineering matriarch and the brutal, charismatic leader she is in the present. The evolution is distinct and fascinating. Beta after he became Beta and a snappy dresser. (Image: Jace Downs/AMC)

It’s also very nice to see there’s more to Alpha than we’ve previously been shown, and that she’s wrestling with very real emotions even as she mercilessly leads her people as a sort of mega-Darwinist who kills, or allows to be killed, anyone she considers weak, including babies. (Those weak, weak babies. Get your shit together, babies!) Her powerful maternal feelings in the past still haunt her in the present, despite the years of trying to convince herself that her daughter was dead to her “the minute she was born,” as she told Beta. It’s echoed by her relationship with Frances. When Lydia was captured but not “officially” abandoned last season, Alpha had zero problems commanding Frances to abandon her baby in a zombie-populated field. Now, with Lydia having chosen the colonists over the Whisperers, Alpha can’t help but empathise with the equally mourning Frances, despite everything Alpha’s said, built, and done over the last seven years.

Last but not least, there’s Beta. Even though there’s not a lot of depth to his character – he’s unable to move on from the shambling corpse of someone he loves, standard Walking Dead procedure – the figurative and literal writing on the wall compares him to Morgan in TWD’s best episode ever, “Clear.” Both Morgan and Beta are broken when Rick and A found them, going crazy in isolation, scribbling their obsessive thoughts on every surface. Interestingly, it’s Morgan who was too far gone for Rick to reach, while A was able to “save” Beta, who’s has found purpose and a bizarre sort of stability among the Whisperers. Yet when Morgan found his own peace, he wasn’t strong enough to maintain it (thanks to that darned cantaloupe).

All in all, it was a surprisingly thoughtful Walking Dead, but also a very special one, because it gives us something we arguably haven’t seen since the Governor in season three – a conflicted primary antagonist. Negan, the nihilistic Wolves, the cannibals of Terminus, all of them were completely secure in their villainy. Alpha was as well until Lydia abandoned her, but now she’s showing weakness and mercy in the society where she effectively outlawed both. We’ll see if Alpha has truly moved past it as she tells Beta, or if it will come into play as the war between the Whisperers and the colonists begins. But even if it doesn’t, The Walking Dead will be richer for showing us that it’s there. Out of the zombie apocalypse, into the sanitarium with the machete-wielding masked man. (Photo: Jace Downs/AMC)