Most smartwatches are aimed at couch potatoes who aspire to be kind of active – but not all. Some are destined to be ugly, chunky, fitness machines. They’re jam-packed with every sensor imaginable and built for a specific fitness freak. You know, that insufferable gym rat bulging with high-definition muscles you thought were specifically reserved for Chris Hemsworth. The kind of monster that opts for a six-count burpee while the rest of your class struggles – just because they can. They waltz into the office Monday morning, talking about how they crushed that 13-mile hike over the weekend on a straight 90-degree incline. Listening to their fitness routine is enough to send you into a coma. The Garmin Fenix 6X Pro Solar Edition is made for that person.

What is it?: A beefy fitness smartwatch with a solar power display

This is a monster smartwatch. I mean that in the sense it has a stupid number of features and is offensively hideous on my petite wrist. It was clearly designed with a beefy dude in mind, with an industrial-looking watch case that’s packed with an array of sensors. On top of your typical accelerometer, heart rate sensor, and gyroscope, you also have built-in GPS, Glonass, a barometric altimeter, compass, thermometer, and pulse oxidation sensors. If that weren’t enough, it also stores up to 2,000 songs, features an NFC chip for contactless payments, and is waterproof up to 10 ATM. (For reference, a smartwatch is considered swim-proof at 5 ATM, which is a depth of 165 feet. Garmin is flexing here.) And just to drive the point home, the Pro Solar features a new display that converts the sun’s rays into extra battery.

I could list out every single metric the Pro Solar tracks, but I’d probably get carpal tunnel from typing it out. Suffice to say, it’s a lot. You get all the basics you’d expect from a fitness tracker – steps, calories burned, floors climbed, and so on – on top of recovery stats, in-depth heart rate metrics, and downloadable maps for various golfing and skiing courses. And you know what? At £850, the Pro Solar better have every single feature under the sun. The thing is, after about two weeks of testing the damn thing, I’m not entirely sure it’s worth it even for die-hard triathletes.

I say this because no matter which way you slice it, the Pro Solar is not practical for everyday wear. The industrial watch case isn’t flashy, but it is bulky. It’s the sort of watch that will catch on jacket sleeves, leave impressions on your skin, and totally get in the way of typing. I was wearing it while writing this review and then took it off because it was just so uncomfortable rubbing up against my keyboard. And while you can get away with that if your fashion sense is relatively staid, it’s not something you should wear to a wedding unless you can manage to hide it under the sleeve of a sport coat or blazer. That’s even hard for men to pull off, as I guarantee you this thing will catch on your cuff or just suffocate your wrist in the process. 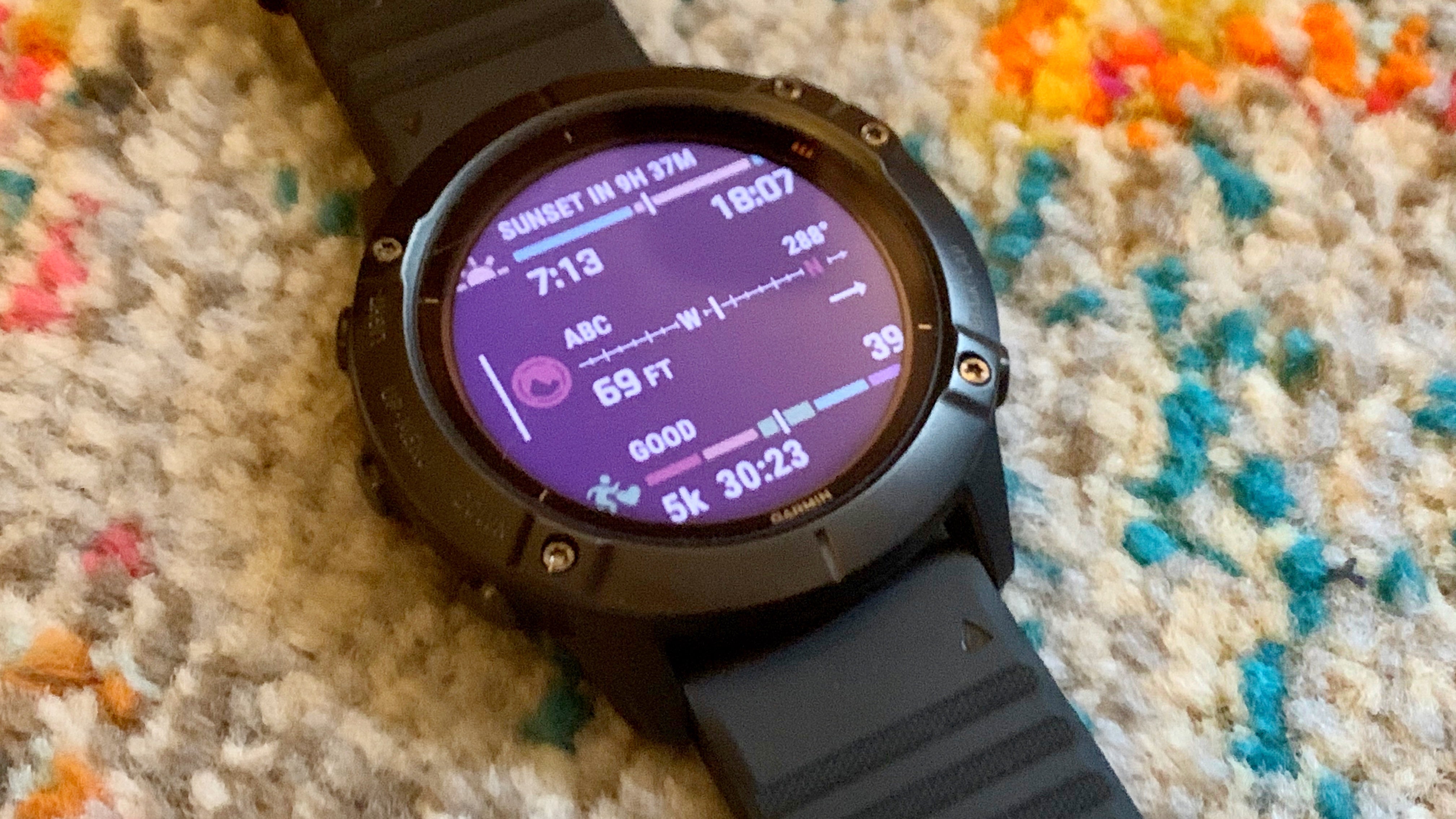 It tracks a lot, and there are lots of graphs. But unless you like that sort of thing, it can feel overwhelming. (Photo: Victoria Song/Gizmodo)

That discomfort extends to activities and sleep tracking too. I wore it to a yoga class and found its size made certain poses painful on my wrist. On a 3.6-mile hike, it was annoying trying to lift my jacket sleeve over the watch to check my progress. That also defeated the whole point of its solar display as it got zero sunlight. As for tracking my sleep, I found I never wanted to wear the Pro Solar overnight after wearing it for a full day. I did, though, for testing, and while it was about as accurate as my Fitbit Versa 2, I had a harder time falling asleep. I’ve never found sleeping with wearables to be uncomfortable, but the Pro Solar was a definite exception.

Another issue is interacting with the device is cumbersome. While I found the transflective screen super easy to read under direct sunlight on my outdoor runs, it can be hard to read indoors even with the backlight on. The lack of a touchscreen is also irksome. To navigate through the Pro Solar’s menus, you’ve got to memorise which of the watch’s five buttons do what. True, four of them come with etched labels, but you’d have to have eagle eyes to read them mid-run comfortably. That can be jarring when you’ve finished an activity. After two weeks, I still have trouble figuring out what button to press to stop recording, save or discard a workout, or pause and resume. This isn’t limited to the Pro Solar – it’s a gripe I’ve had with plenty of Garmin’s and Polar’s high-end fitness watches. Outside of working out, the button navigation makes viewing your daily stats and setting up the watch itself an exercise in patience. In fact, it feels downright archaic given that most smartwatches and trackers these days let you swipe between menus, or limit you to a single button to keep things simple. 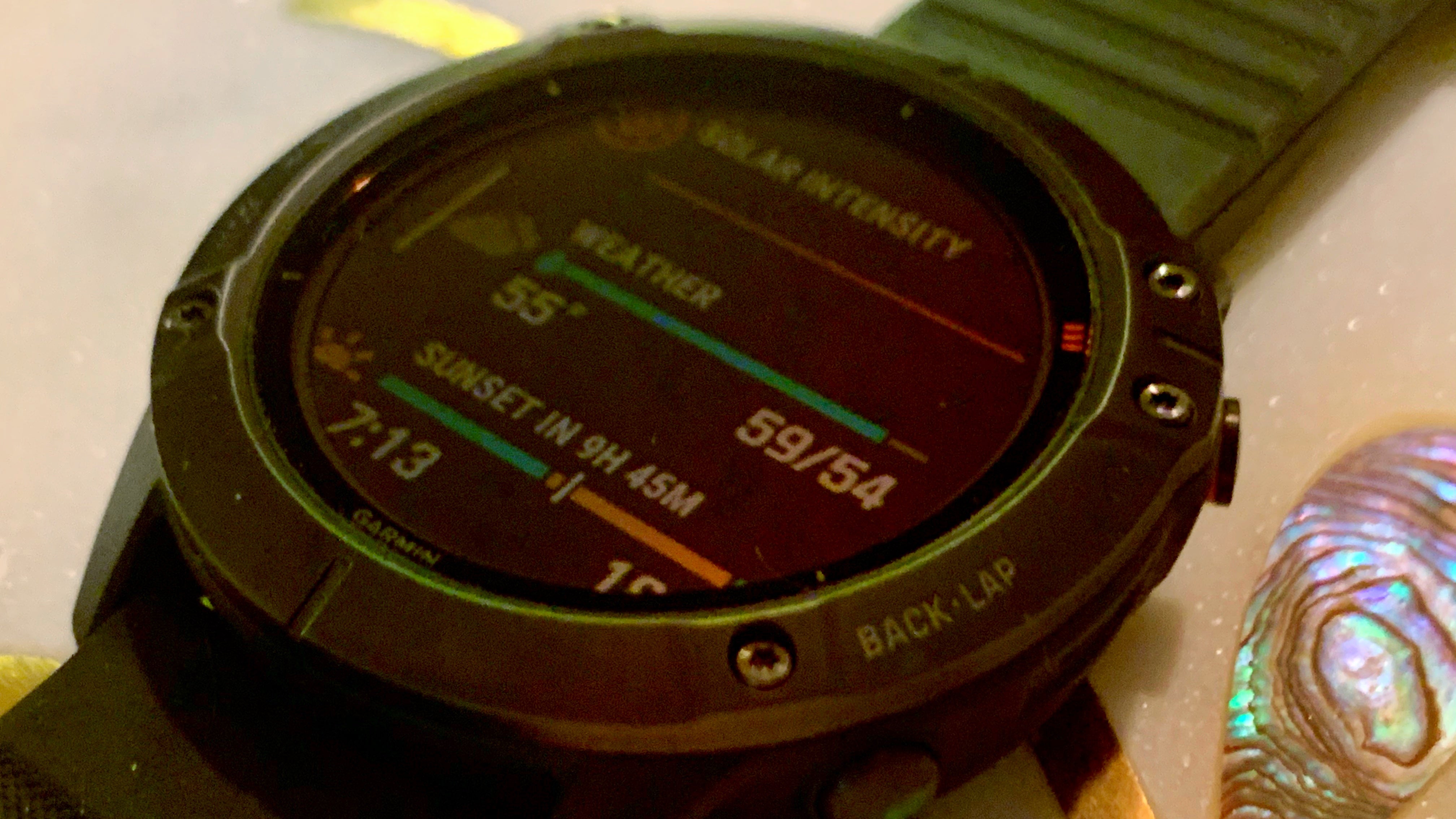 It’s hard to remember what button does what unless you squint to read the labels. What is this, writing for ants? Plus, the transflective screen can be dim indoors, even with backlighting. (Photo: Victoria Song/Gizmodo)

To be fair, there are some things the Pro Solar excels at – I’m just not sure it justifies the price. Battery life, for one, is excellent. After unboxing, I charged the Pro Solar up to 100 per cent and haven’t had to plug it in since. (My watch says I still have another 11 days left.) According to Garmin, you can get 21 days off a single charge, plus an extra three days if you happen to spend three hours a day outside in 50,000 lux conditions. Still, the difference between 21 and 24 days of battery life feels negligible compared to say, the difference between two and five days of battery. And that’s if you even get the full extra three days. Modern life does not generally afford me three hours a day in direct sunlight – and I doubt it does for most people with desk jobs. Sure, I might have to charge the Apple Watch every night, but I find it more enjoyable to interact with. The same goes for my Fitbit Versa 2, which I can get up to seven days of battery on a single charge. 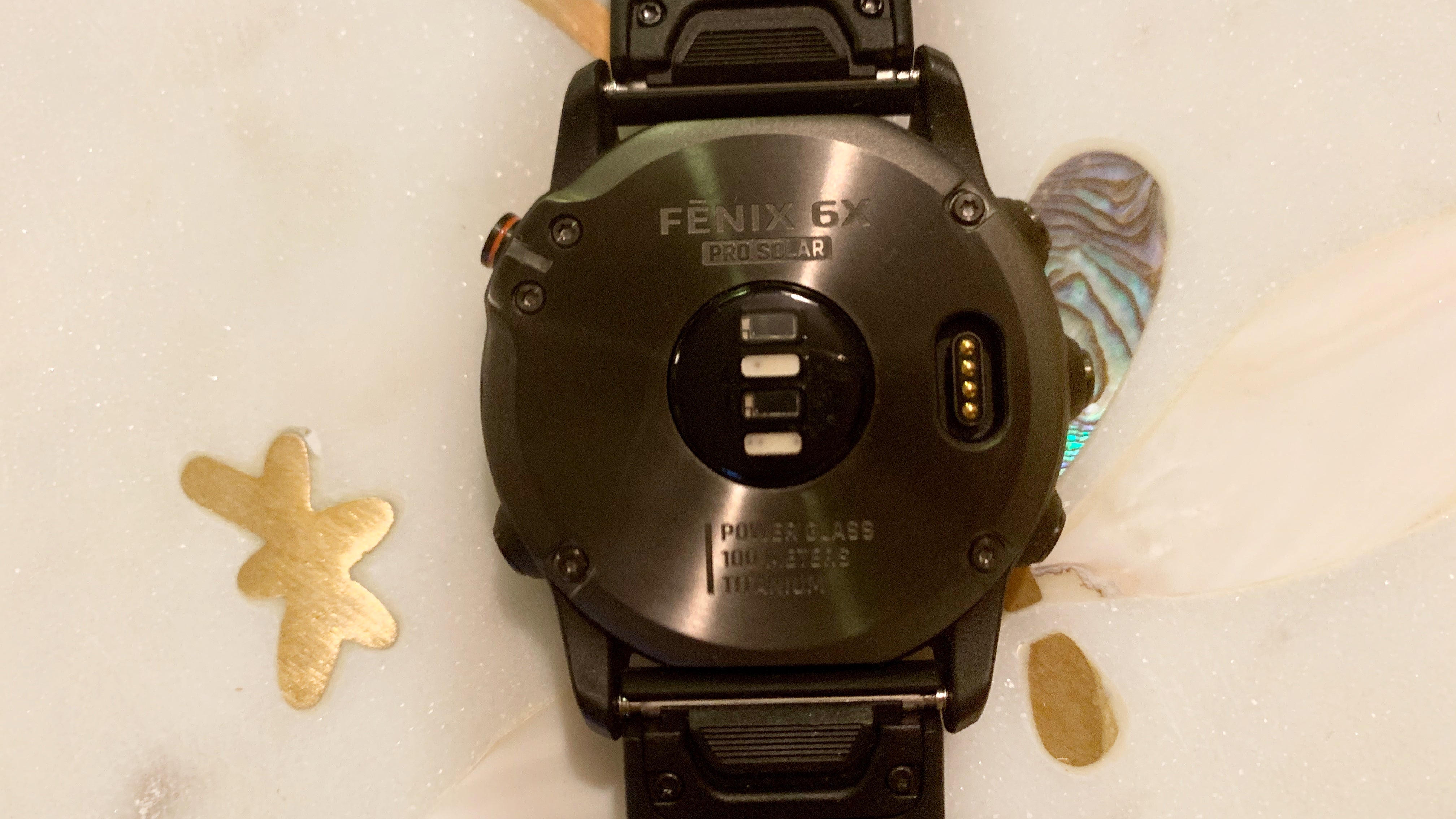 So many sensors. (Photo: Victoria Song/Gizmodo)

There is, however, such a thing as too much data. Yes, I got a rush of accomplishment whenever I reviewed the wealth of metrics recorded in the Garmin Connect app and on my wrist. It’s just that I still don’t know what to do with a lot of it, or how to apply the data collected to my personal fitness goals. Apple did a good job of integrating 90-day health trends in both the Activity and Health app in iOS 13. Now I can just see simple up or down arrows to see how I’m doing. Garmin has made strides too in recent years, but its app still requires you to do a lot of puzzled staring at charts and graphs. (The Polar Flow app is a better example of a data-rich platform that, while still clunky, presents information in a more digestible way.) 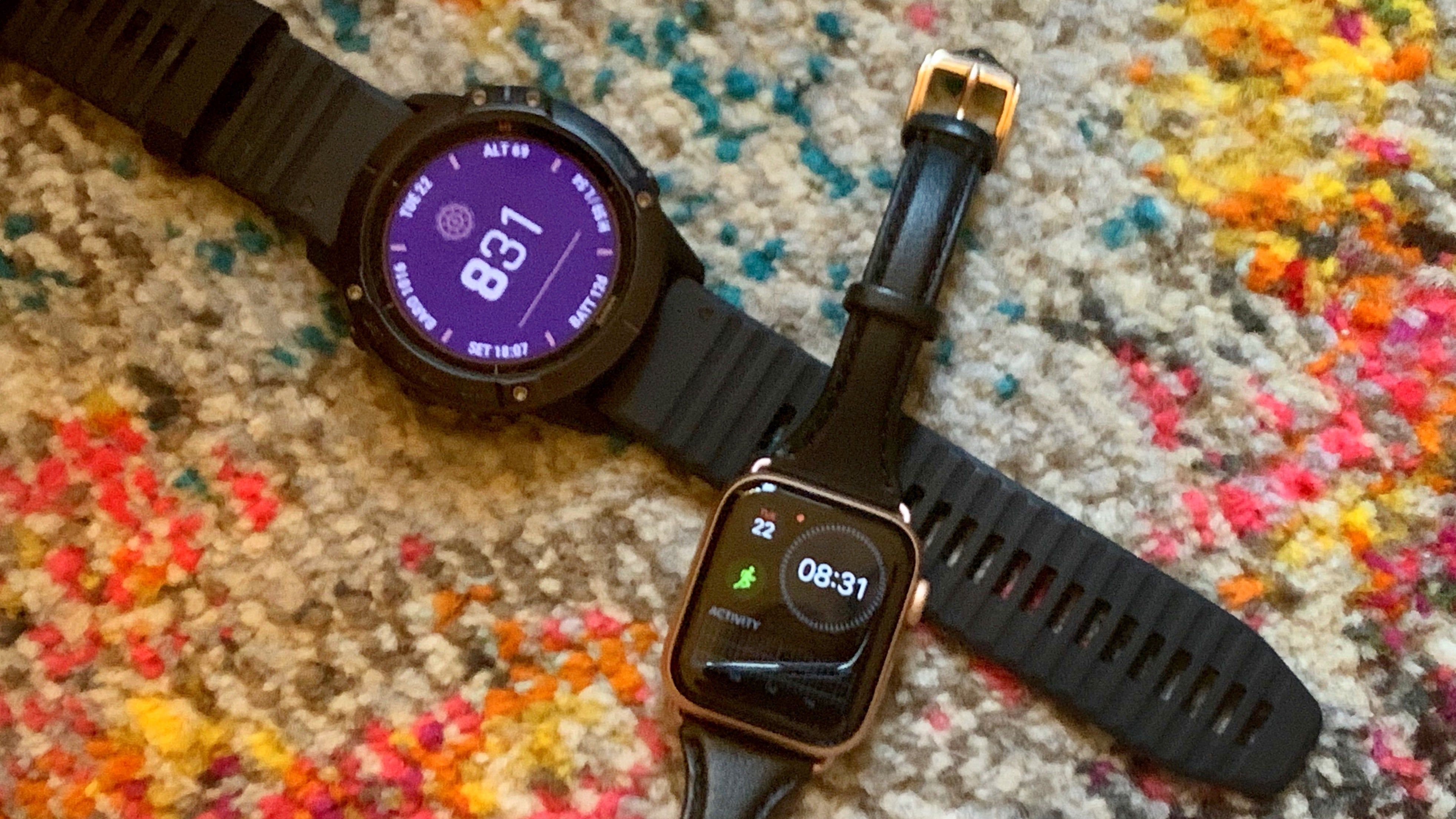 These days, all but the most extreme fitness enthusiasts would be well-served by the Apple Watch, which is about half the price of the Pro Solar. (Photo: Victoria Song/Gizmodo)

When you factor in the bulk, the unintuitive design, and the negligible power-saving via the solar display, the Garmin Fenix 6x Pro Solar Edition feels hollow. The Fenix series has always been Garmin’s top-of-the-line smartwatches, but its premium sensors and boatload of metrics offer diminishing returns as more “casual” smartwatches beef up their fitness and wellness features for a better price. Sure, the person best-suited to a watch like the Pro Solar is a lean, mean exercise machine – but you’d have to dive into the depths of the ocean, cycle 20 miles, run another 10, and then hike into the tundra in a single day to make the Pro Solar worth it. Except these days, even hardcore athletes would be served well by a Fitbit Ionic, mid-range Polar watch, or even a cheaper Garmin. Heck, if you don’t mind the Apple Watch’s battery, that’ll track most of the same stuff too. And at the very least, these watches are much cheaper and not as ugly. So as impressive as the Pro Solar is, what exactly is the point?