I rarely use an external monitor with my laptop for the simple fact that I don’t want to get used to all the extra screen space which isn’t available when I travel with my computer. My ideal solution to this problem would be exactly what Matt from YouTube’s DIY Perks channel has created: a laptop with an extra screen that flips up to eye level to double the size of your desktop.

Companies have been dabbling with dual-screen laptops for quite a few years now. Back in 2008, Lenovo revealed its ThinkPad W700ds which featured a second but considerably smaller screen that slid out of the side of the mobile workstation’s main display. More recently, devices like the HP Omen X 2S and the Asus ZenBook Pro Duo have integrated a small secondary display into the laptop’s keyboard area, or in the case of the upcoming Microsoft Neo, have replaced the keyboard altogether with an extra display – but that’s not what I’m after.

We’ve even seen laptops that automatically deploy side by side screens when opened, but that’s a deal-breaker for anyone who’s ever tried to use a laptop on a cramped plane, a crowded coffee shop, or even had to work while precariously balancing their computer on their lap. My ideal solution is a laptop with two screens stacked atop each other, and that’s exactly what Matt has created here – more or less. Given how thin modern flat-screen displays can be manufactured, a second flip-up screen potentially wouldn’t necessarily add a huge amount of thickness to a laptop. But given companies like Apple have billions of dollars to sink into R&D to develop new hardware, while DIY Perks does not, Matt’s creation isn’t exactly svelte, but functionally it’s quite clever.

After sourcing an LCD display and a controller board (necessary for it to interface with an existing laptop) for under $100 (£77) on eBay, aluminium panels were used to create a rigid backing for the second display, while a 3D printer churned out custom plastic bezels, a housing for the board, and a pair of hinges that allow the second screen to fold behind the main display for easy transport. 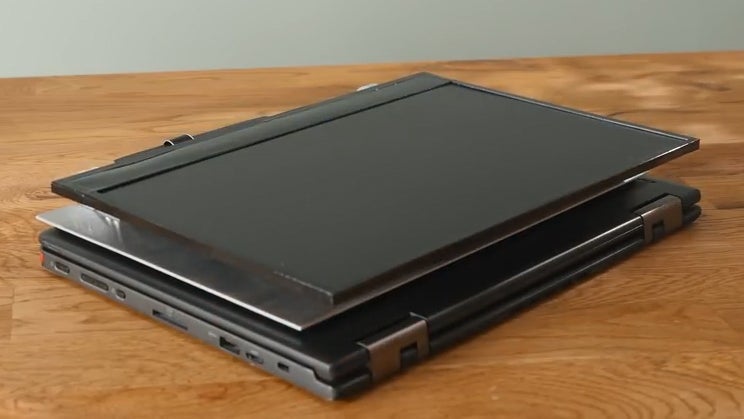 Not exactly a piece of hardware Tim Cook would be proud to show off on stage. (Screenshot: DIY Perks/YouTube)

Given the laptop being upgraded lacked USB-C ports which could have been used to deliver both power and a signal to the second screen, a portable battery pack had to be used instead, which regrettably further adds to the bulk and thickness of this hacked machine. The results aren’t pretty, I can’t see myself performing similar surgery on my computer, but having a second screen that sits at eye level is a feature my horribly crooked spine would be eternally thankful for. More importantly, the added screen space doesn’t come at the cost of sacrificing the laptop’s physical keyboard: a trade-off I hope companies stop making.