The pad abort test of an uncrewed CST-100 Starliner happened at 7:15 am local time (2:15 pm GMT) today from Launch Complex 32 on White Sands Missile Range in the US state of New Mexico. The jettisoned spacecraft reached a height of 4,500 feet, followed by the deployment of two of its three parachutes and a safe landing on the desert floor. Boeing will now carefully inspect the crew module and review all the data, but the “initial indication is that we’ve had a successful test,” said a Boeing spokesperson during the live webcast.

Once #Starliner’s engines fired, the spacecraft got up to 650 miles per hour (1,046 km per hour) in about five seconds, proving this system can get crew away from a dangerous situation fast. pic.twitter.com/YKlvaMm8Vh

The CST-100 Starliner is Boeing’s contribution to NASA’s Commercial Crew Development programme, which aims to restore America’s ability to deliver astronauts to the International Space Station – something the space agency hasn’t been able to do independently since the retirement of the shuttle programme in 2011. The Starliner programme is years behind schedule, so today’s test should induce some intense sighs of relief, both at Boeing and NASA.

The purpose of today’s test was to evaluate the reusable spacecraft’s pad abort system. In the event of a mishap at the moment of launch, the abort system is designed to quickly shoo Starliner – and its human occupants – to safety. Today’s test didn’t involve a rocket or a crew, but in a real-world situation, Starliner would have to potentially pull off this test with a gigantic rocket exploding underneath. The capsule needs to zip away quickly but also reach a safe distance from the launch pad.

The service module separating from the crew module. (GIF: NASA/Gizmodo)

Once the abort sequence is set into motion, Starliner’s four launch-abort engines (LAEs) are set into action. Ignited, the LAEs push the spacecraft away from the launch pad with 160,000 pounds of thrust. Engineers expected the module to reach a maximum height of 4,500 feet (1,370 metres), according to a NASA blog post.

Once aloft, the spacecraft used its manoeuvring and attitude thrusters to orient the vehicle so the parachute could deploy. The spacecraft ejected the ascent cover and heat shield, and then the service module separated from the crew module. The service module, with its 52 engines, was not expected to survive the test, NASA said. With the parachutes deployed, a series of airbags at the base began to expand in preparation for a soft landing. The whole thing lasted just 90 seconds. 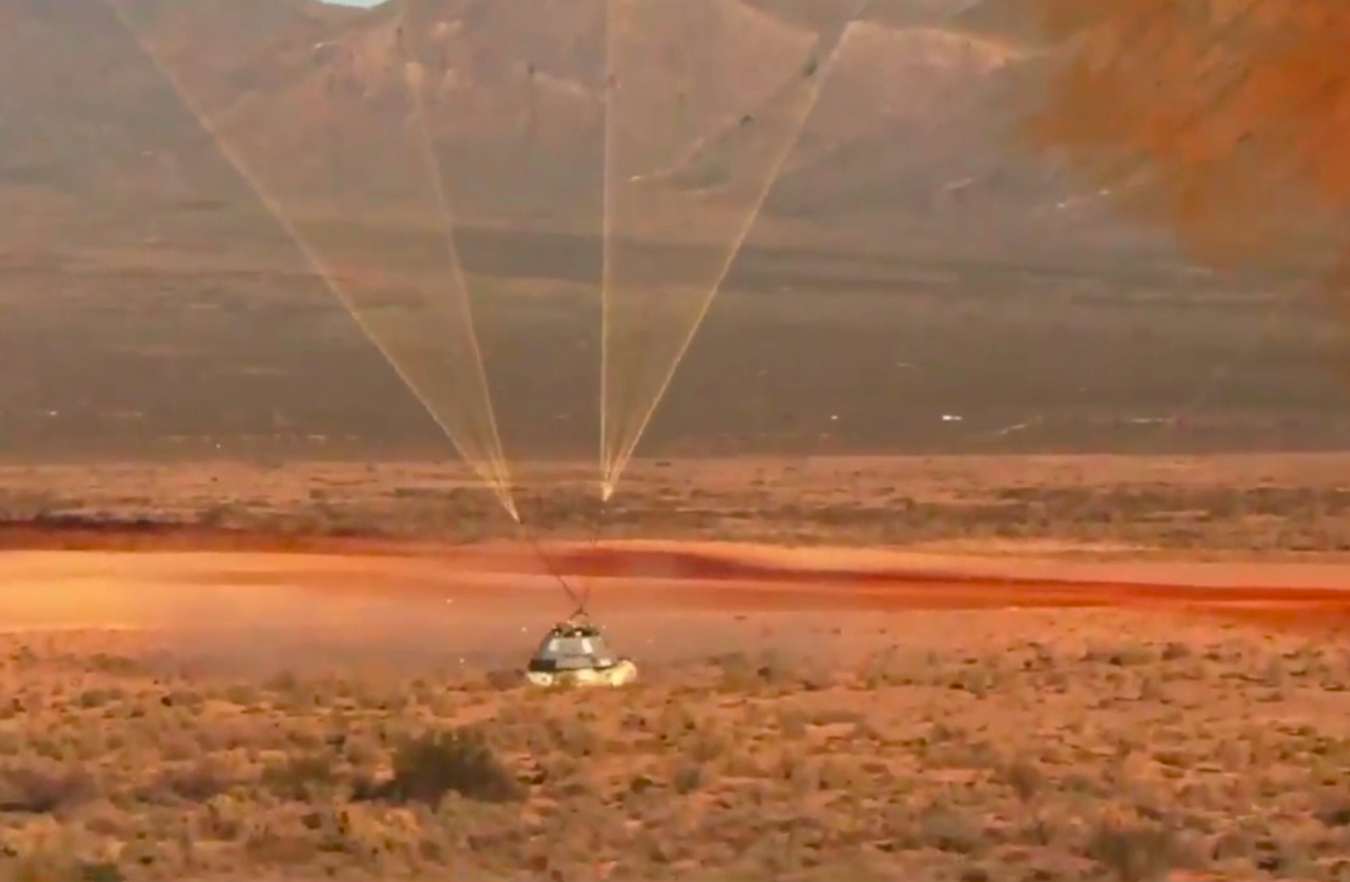 The moment of impact on the desert floor. (Image: NASA/Gizmodo)

Here’s what Boeing had to say about the abort test and the parachute anomaly in a post-test statement:

Today’s pad abort test was a milestone achievement for our CST-100 Starliner team, for NASA, and for American human spaceflight. We will review the data to determine how all of the systems performed, including the parachute deployment sequence. We did have a deployment anomaly, not a parachute failure. It’s too early to determine why all three main parachutes did not deploy, however, having two of three deploy successfully is acceptable for the test parameters and crew safety. At this time we don’t expect any impact to our scheduled Dec. 17 Orbital Flight Test. Going forward we will do everything needed to ensure safe orbital flights with crew.

Boeing will now review the results of the test in detail, including the effects of the launch on a human-like dummy inside the module. The next items on Boeing’s checklist include an uncrewed launch of Starliner (possibly later this year), hopefully followed soon after by a crewed launch test, which likely won’t happen until 2020.

SpaceX is also contributing to NASA’s Commercial Crew Development programme with its reusable Crew Dragon spacecraft. Like Boeing, SpaceX is also behind schedule with its programme, with the most recent setback happening earlier this year when an anomaly occurred during an engine test at Cape Canaveral Air Force Station. An investigation concluded that the glitch would require an easy fix, so this programme should be back on track soon.