Fossil fuels are the root cause of climate change. So it would stand to reason that we should rapidly wind down production of them to avert a catastrophe.

Governments have promised to start doing that as part of their commitments to the Paris Agreement. There’s just one problem: They’re talking out of both sides of their mouths. And according to a new report by the United Nations Environmental Program (UNEP), the world wouldn’t just edge past the 2 degrees Celsius (3.6 degrees Fahrenheit) limit outlined in the Paris Agreement if fossil fuel productions goes as planned. It would blow past it well before 2030. The findings raise uncomfortable questions about just what the hell we’re doing as we race toward what is arguably the biggest crisis humanity has ever faced.

Previous UNEP reports have explored the emissions gap, a metric that shows the gulf between the Paris Agreement goals and what countries have pledged to do. The pledges countries have made are largely aspirational with details to be hammered out. The new report creates a metric known as the “production gap” that looks at what countries have planned for fossil fuel production in the coming decades and compares it to what’s needed to avert warming of 2 degrees Celsius and 1.5 degrees Celsius (2.7 degrees Fahrenheit).

While countries have shown aspirations to reduce emissions, the reality is far more bleak and complicated. The global economy is currently hardwired to run on fossil fuels. As incumbents, the multibillion corporations that extract gas and petroleum have a huge built in advantage over upstart renewable companies. In addition, fossil fuels enjoy $5 trillion (£3.9 trillion) in direct and indirect subsidies, and there’s ample infrastructure to extract and burn them. As a result, the levers of policies are pulled largely in favour of preserving this status quo despite the existential risk it poses.

“Investments today in oil and gas infrastructure like pipelines and platforms are long lived, oftentimes 20 years or more,” Michael Lazarus, the US director of the Stockholm Environment Institute and report author, said on a press call. 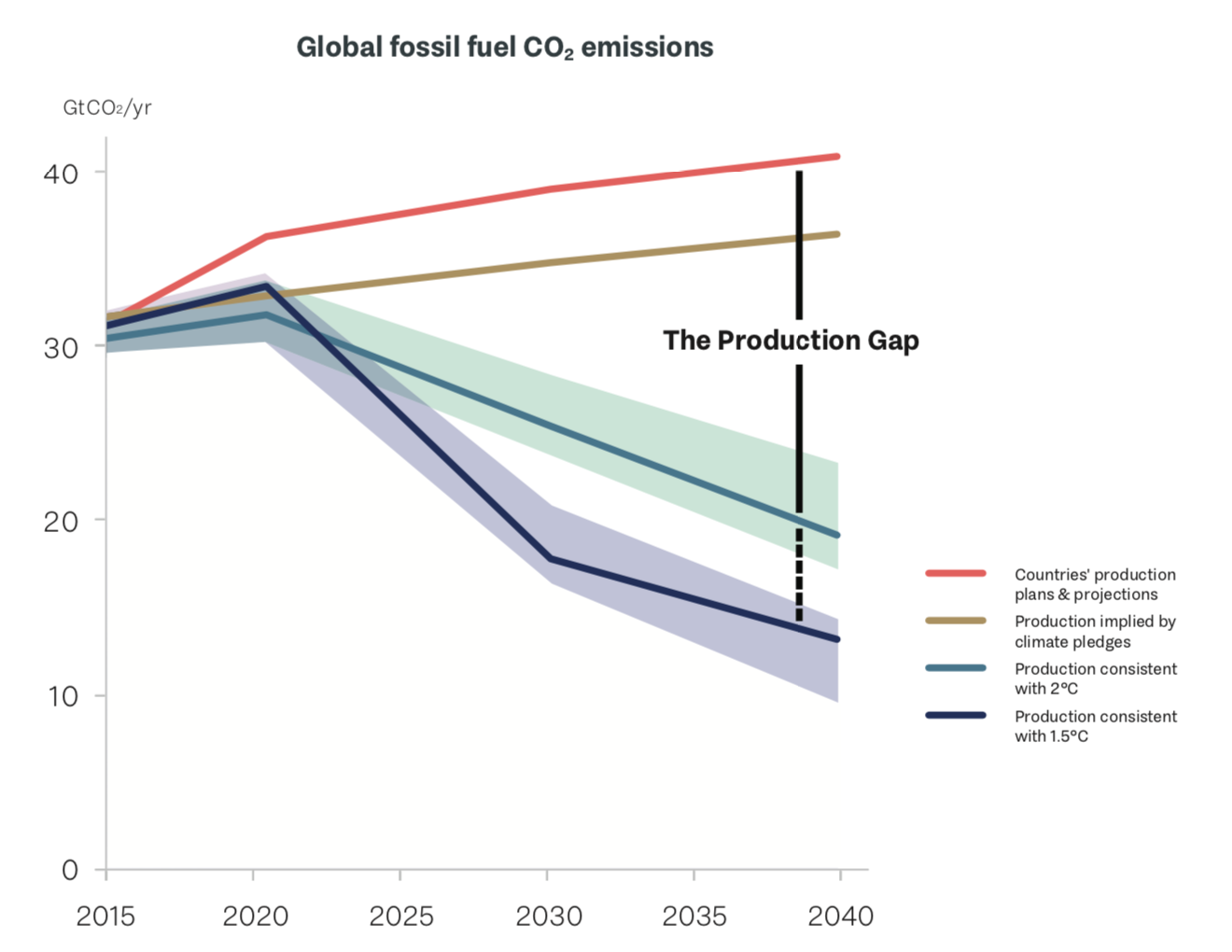 The findings in the new report show that the fossil fuel extraction plans for the next 10 years – plans that don’t factor in any new oil, gas, or coal discoveries or shifts in demand – will lead to enough fossil fuels being dug up to emit 39 gigatonnes of carbon, up from 35 gigatonnes in 2018. That’s 53 per cent higher than what’s required to keep warming within 2 degrees Celsius of pre-industrial times and 120 percent higher than a 1.5 degrees Celsius world. Put another way, humanity would likely be screwed. The production gap is projected to keep growing in 2040, setting the world on a very dangerous path.

Coal is the biggest driver in the production gap with countries on track to produce 280 per cent more coal than is compatible with a 1.5 degrees Celsius world. China accounts for nearly half of that growth. Other countries are on track to do their part to steer us toward climate catastrophe, though. Notably, the US is set to become a net exporter of fossil fuels next year as it floods the world with cheap natural gas. Overall, the top nine petro- and coal-producing states account for 69 per cent (not nice) of all fossil fuel production. Twenty-seven countries produced 90 per cent of all fossil fuels in 2017.

That underscores the miserable fact that the fate of the planet is the in hands of a small cadre of countries essentially holding the world hostage. That’s a bleak outlook, but it’s also one that means targeted policies have the potential to stave off the climate crisis.

The report argues that supply side measures like cutting subsidies for fossil fuels and pursuing a just transition that winds down fossil fuels while retraining and otherwise protecting workers are two avenues to chipping away at fossil fuel dominance. It also argues the international climate talks like those taking place next month are a venue to wind down the fossil fuel industry.

There are little signs of progress here and there. But way more radical action is needed to show the world is really committed to minding the gap.