It’s a truth universally known to smartwatch reviewers that inevitably, a Pebble fan will eulogise their faithful but dying smartwatch in your inbox, comments, and DMs. Never mind that Pebble bit the dust years ago. These loyal diehards are genuinely, rightfully bereft, holding on to ageing devices because the other options right now are either too fancy, too expensive, or too fitness-focused.

Well, after years of mourning, I have some good news. After about a week of testing, the Fossil Hybrid HR feels like a worthy successor to Pebble’s legacy. Of course, it’s not the exact same, but there’s a lot to like. Its e-ink display is easy to read and doesn’t consume much power. You get two weeks of estimated battery life, along with continuous heart rate monitoring. Feature-wise, the watch keeps it simple – no bullshit bells and whistles. Best of all, it’s only £190 – and, dare I say, better looking.

What is it?: Fossil's latest hybrid analog smartwatch

To be clear, the Hybrid HR isn’t here to compete with full-featured, touchscreen smartwatches like the Apple Watch or the Samsung Galaxy Watch Active2. Anyone looking for LTE connectivity, smart home controls, NFC payments, and advanced fitness tracking will be disappointed. There are no ECG readings, reminders to breathe, or dubious claims about wellness. In essence, the watch is more like a basic fitness band disguised as a stylish analog watch. If that’s all you want, then the Hybrid HR does an excellent job.

For me, the best thing about the watch is its display. One problem I’ve had in the past with hybrids is reading notifications can be a total pain. Either you sit there for an awkward number of seconds, waiting for the entirety of your notification to scroll, or you have to guess why your watch is vibrating. Previous Fossil hybrids attempted to deal with this by vibrating and then moving the watches to specific times – so a buzz and the watch pointing to three o’clock might mean a text from your mum. It was a clever solution but relied on you actually remembering what apps and people you’ve programmed for which times.

That’s not an issue with the Hybrid HR. The e-ink display – which is reminiscent of the Pebble Time Round, minus the colour – is easy on the eyes and legible even under direct sunlight. It’s harder to see if you’re outside at night or otherwise in a dark area, but there’s backlighting for that. There’s negligible lag when switching through screens, and you can easily scroll up and down through messages via the watch’s buttons. All-in-all, it feels like a mini Kindle screen on your wrist.

The one question I had before testing was the watch’s physical hands. At first, I thought they would be an annoyance, either by blocking stats or making notifications hard to read. In practice, it wasn’t a problem. When you read an alert or message, the hands automatically move to three and nine so they don’t obstruct your view. That’s not to say the hands will never get in the way – I was annoyed when the minute hand blocked my distance during a run. It’s more that, over the course of a week, this only happened maybe two or three times. Plus, watch hands move so the inconvenience lasts a couple of minutes at most. 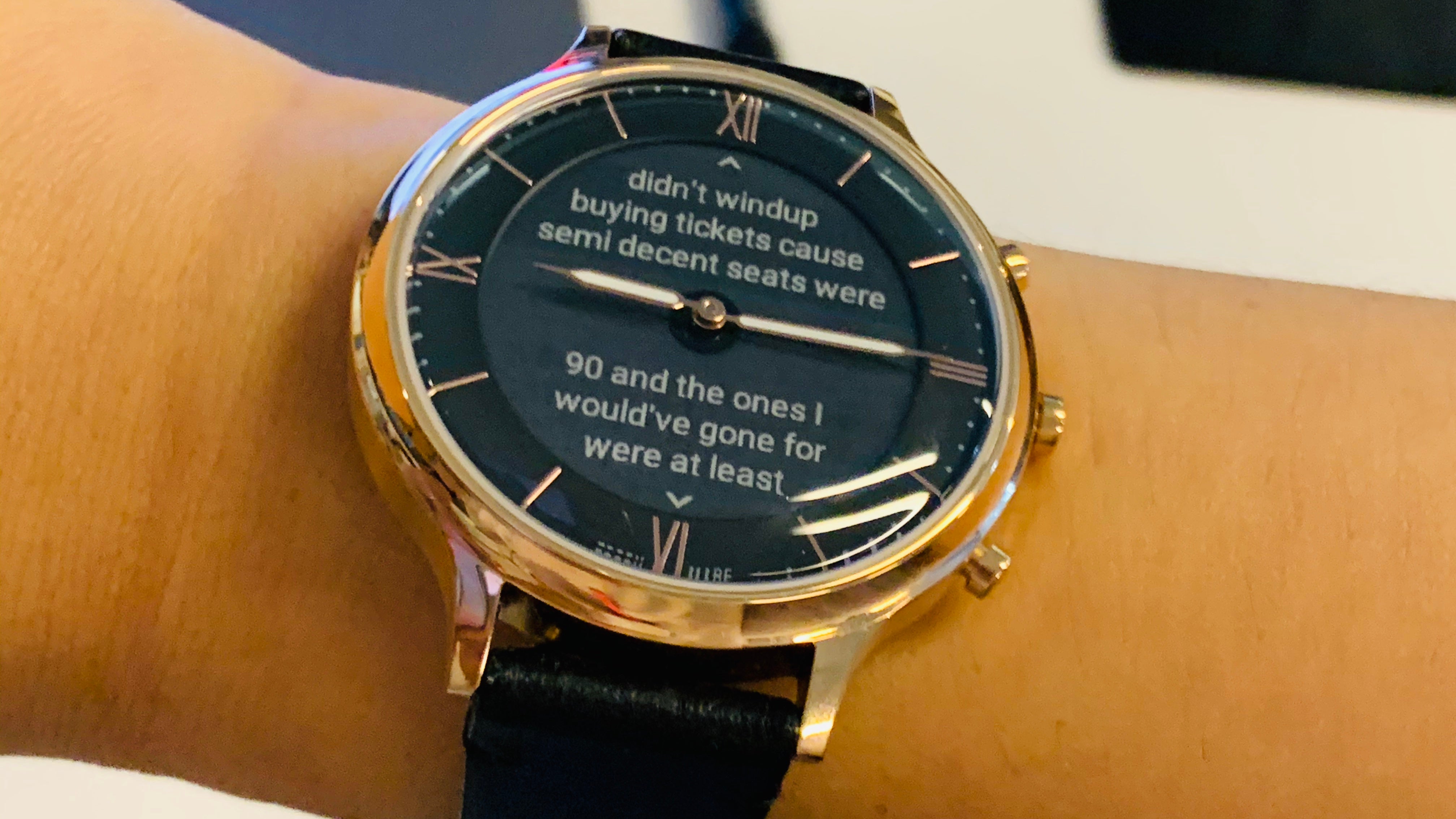 If you’re worried about hands obstructing your view, don’t be. They move to 9 and 3 automatically when reading messages or alerts. (Photo: Victoria Song/Gizmodo)

App-wise, Fossil hasn’t done anything outrageous. Its companion app is fairly bare-bones but easy to navigate. Customising widgets and watch faces is easy, as is viewing your stats and syncing. It works without any major hiccups, and honestly, that’s good enough.

The Hybrid HR also lasts what feels like forever on a single charge. When I unboxed my unit a week ago, it already came with 70 per cent battery. Without charging it once, I sit here a week later with 20 per cent left – right on track for an estimated 14-day battery life. And with four hours of logged exercise, 24/7 wear, and continuous hour heart rate monitoring, it’s actually quite impressive.

Another point in the Hybrid HR’s favour – style. I can admit that vanity is one of my personal sins, and it does, in fact, feel good to not be stuck wearing another hideous smartwatch that’s packed with features but skimps on aesthetics. My review unit was the gold-and-black Charter model, and it’s gorgeous. I would not be afraid to wear this at a formal event, or even with everyday streetwear. I also appreciate that it doesn’t completely dwarf my wrist or weigh me down while exercising. That said, your customisation options are somewhat limited. You can custom program widgets and select between a few different watch faces, but that’s about it – there’s no venue for a dedicated community to build customised watch faces, as with the Pebble. 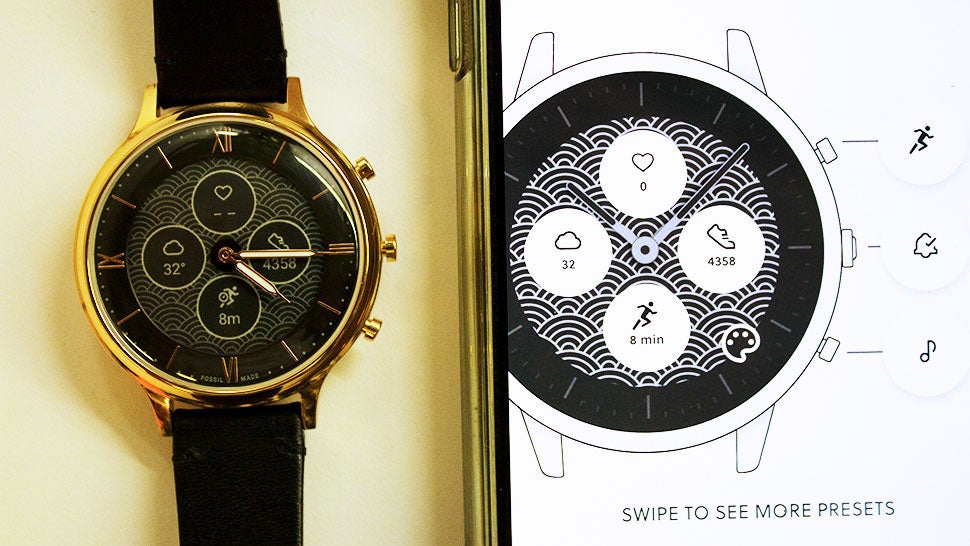 But the Hybrid HR isn’t perfect. Its major weakness is fitness tracking. Heart rate monitoring isn’t the issue – on that front, the watch is pretty solid. It’s mostly everything else. I wore the Hybrid HR simultaneously with the Apple Watch Series 5, and the gap between the two on my daily step count was generally around 1,000 steps. (Full disclosure: I’ve tested various Apple Watches and Fitbits against a control pedometer in treadmill tests many times, and I can confidently say both companies’ algorithms are accurate within a 1-2 per cent margin.)

In general, it doesn’t matter if a watch is x number of steps over or under, so long as it’s consistently off by the same amount. The problem was, this wasn’t the case. Most days, the Fossil was about 800-1,000 steps over, but some days it’d be a few hundred steps under. The biggest discrepancy came on a rest day. I logged 7,674 steps with the Series 5, while the Hybrid HR logged 4,470 steps. That could have been a one-off fluke, but combined with the overall inconsistency, I wasn’t too impressed with the watch’s step-tracking. 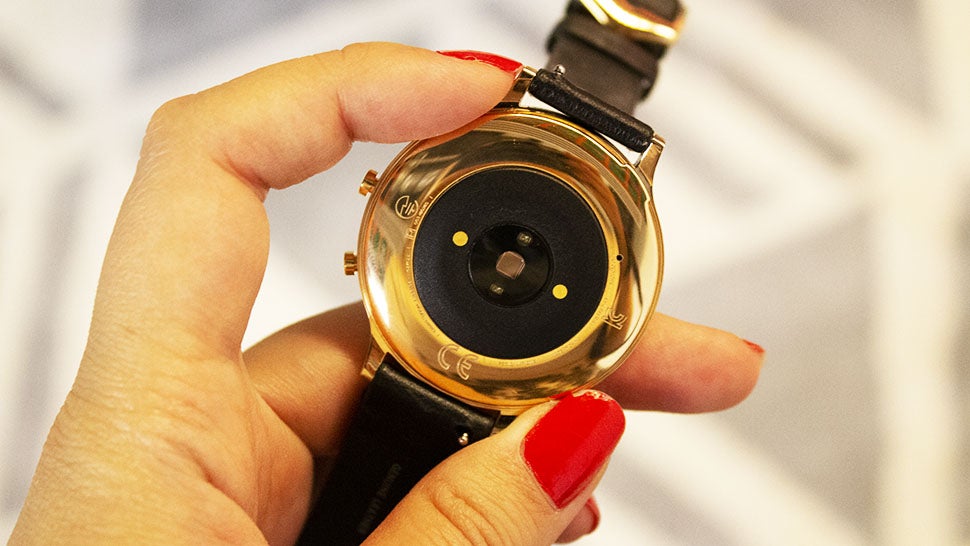 Likewise, it greatly over-reported my distance on three runs. During one run, my phone logged a distance of 3.1 miles via the Map My Run app. Meanwhile, the Hybrid HR recorded that run as 4.3 miles. On my next run, my phone logged 2.2 miles, while the watch registered 2.8 miles. For the last run, my phone tracked 2.69 miles to the Fossil’s 3.4 miles. I’m thankful for the credit, but it’s not ideal for training. You could argue my phone’s GPS was being wonky, but I also simultaneously wore a Series 5 on all three runs. In each case, the Apple Watch – which features built-in GPS and therefore doesn’t use my phone – logged 3.12 miles, 2.2 miles, and 2.62 miles respectively.

As for sleep tracking, the watch generally got my bedtime and waking time accurate within 10-15 minutes. That said, I’m somewhat sceptical that it provides a complete picture. I have a sassy 19-pound cat who has serious objections to having been put on a diet. Every night he yowls between 4-6 am, demanding more of his sweet, sweet kibble. When I don’t comply, he knocks over cups and furniture. It’s a given that I will wake up at least once or twice a night, get out of bed for a few minutes to fix whatever it is he’s broken. However, that wasn’t reflected by the watch. In a week, it only logged one disruption. 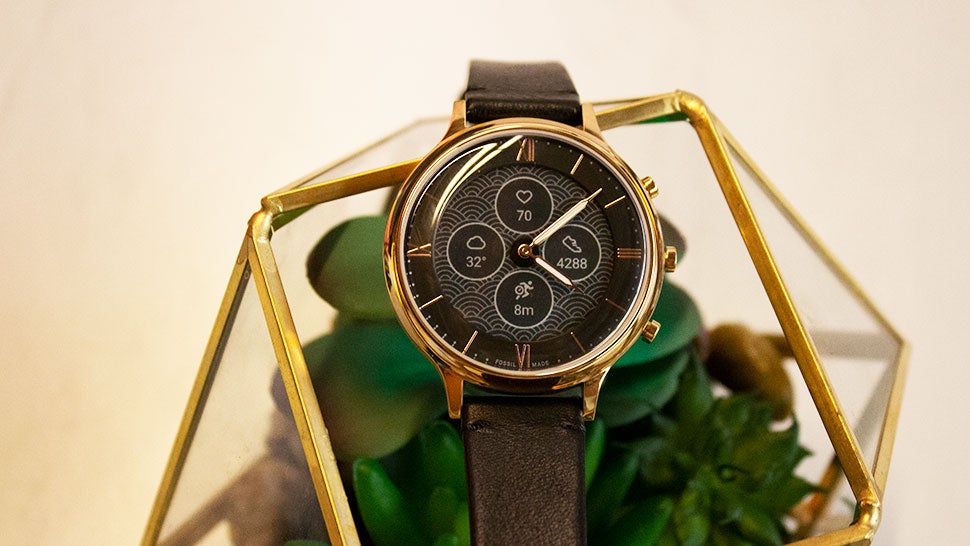 Fitness tracking is meh, but I appreciate how well this functions as a basic smartwatch. (Photo: Victoria Song/Gizmodo)

All this to say the Hybrid HR is still fine as a basic tracker. It’s not going to give you the most accurate results, but you should get a decent picture of your everyday activity. You’ll know which days you crushed it and which days you did your best potato impression. Also, it’s pretty clear this watch isn’t aimed at fitness buffs. My harping is more of a friendly reminder that if you do end up buying the watch, you should probably mentally knock off 1,000 steps from your daily count and use your phone for tracking outdoor activities.

What makes the Fossil Hybrid HR compelling is it feels like a good balance between form and function. It doesn’t do too much, especially by today’s smartwatch standards, but what it does do is deliver the basics in quality, battery life, and an aesthetically pleasing package. The fact it adds sleep tracking and accurate heart rate monitoring on top of that is a plus. Not everyone wants the fanciest smartwatch – and for those folks, the Hybrid HR is an excellent choice.