While many of us spent the weekend unpacking winter coats of various thicknesses and draping our windows in that insulation film that never seems to work, the US state of Minnesota's Department of Natural Resources engaged in its own altogether better seasonal tradition: setting up its eagle cam.

The myriad streams of puppies, napping in piles atop one another still hold dominion in the cuteness category. For excitement, who can forget the infamous llama chase of 2015. And of course there’s bear cam. But all live videos of the natural world have their place, and this pair of bald eagles constructing and guarding their nest outside St. Paul has an indomitably hibernal quality.

Having already cemented its status as an absolute gift to the world, the eagle cam could have easily continued as it has been – proving unbroken access to the deliberations of two majestic creatures, who, presumably, will majestically bone in the coming weeks. But to up the ante, the stream now includes sound. Intermittent sound, granted, and much of it incidental wind gusts and other rumblings, though I was lucky enough to hear several formidable screeches and was overcome with the urge to walk naked into the tundra. Nature: it has an effect.

In the event MDNR’s eagle cam does not offer high drama, a second eagle cam in the southwestern region of the US state of Florida has been the cause of some avian fuss of late. Harriet and M15 – the pair who, if those were humans, would I assume be a regular woman and either an android or a spy – has managed to produce two eggs in less than a week, and have been busy fending attackers off from their nest.

Whether the Ken Burns documentary or messy reality show editions of the eagle cam appeal to you more is immaterial: however you lean into winter is equally valid. 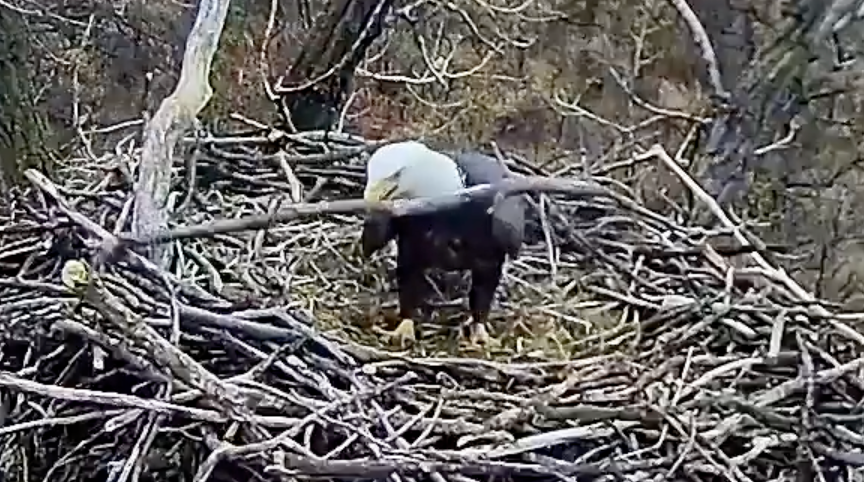 You can watch the Minnesota Department of Natural Resources eagle cam below, and the Southwest Florida Eagle Cam here.