It's the Last Temptation of Negan on The Walking Dead

Ezekiel has a dark secret. Alpha reveals her master plan to destroy Alexandria. The inhabitants of Hilltop face dangers known and unknown. Negan faces his biggest crisis since his days as a Savior…and meets the zombie apocalypse’s newest, biggest asshat. It was a busy but thoroughly compelling episode of The Walking Dead – with more than a few surprises.

One of the biggest improvements of the New, Good Again Era of The Walking Dead has been how much better the show has gotten at making all of an episode’s assorted storylines interesting. Even when they haven’t contributed to the overall story, they’ve given us looks at the world or the characters and fleshed them out – in stark contrast to the Old, Crappy Era, when the primary storyline was stretched out over an untenable amount of time, while the other scenes were meaningless busywork. (It also has helped that Walking Dead episodes are now kept to a trim 45-50 minutes of actual show footage, as opposed to the bloated 70 minutes-plus of the past.)

“What It Always Is” has five or so storylines going on, but they all have meaning, either to the season’s overarching conflict with the Whisperers, or evolving the characters, or their relationships. For instance, the episode begins with a pretty harrowing scene of Kelly, out trying to hunt, getting attacked by zombies she can’t hear, and tripping and knocking herself unconscious in her panicked attempt to get away. When people realise she’s been gone too long, Daryl and Connie go out to search for her. Back at Hilltop proper, people have begun looking to Yumiko to make decisions because of her natural leadership abilities, which means she also has to question the sullen Magna when more supplies are stolen from Hilltop’s stores while she is on guard. 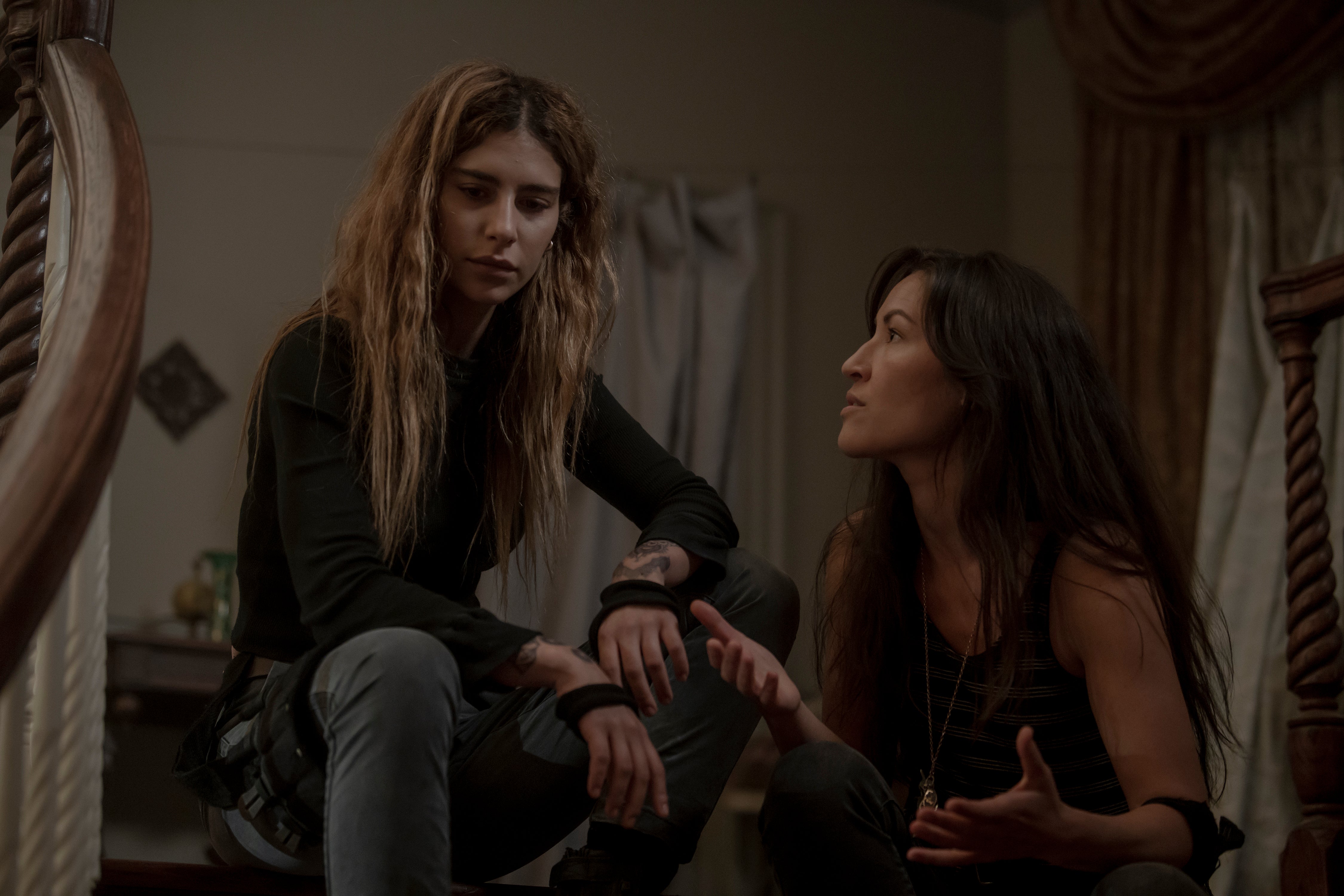 This pic of Magna (Nadia Hilker) and Yumiko (Eleanor Matsuura) is from last week’s episode, so just imagine them unhappier. (Image: Gene Page/AMC)

Magna joins Daryl and Connie and together they find Kelly, who is so banged up she needs to be treated before they return to Hilltop. Kelly reveals there are medical supplies and food in a stash nearby – because she and Magna were the ones stealing them. This leads to a much bigger blowout between her and Yumiko, where we learn Magna was in jail for killing a man in revenge for doing something to her young cousin, and Yumiko has consciously (and unconsciously) been patronisingly taking care of Magna ever since. It’s unclear whether Magna was hoarding supplies in case of an emergency where Hilltop fell, or just out of resentment of Yumiko and her rising authority in the colony, but suffice it to say it puts another strain on their fracturing relationship.

The most compelling scene at Hilltop is between Siddiq and Ezekiel when the former king reveals a large, growing lump on his neck. Ezekiel knows for a fact it’s thyroid cancer because his father and grandmother both had it – except they had it back when there were hospitals and radiation treatment and the dead stayed dead, so they were cured. Ezekiel will not have that chance.

While The Walking Dead is at its most fun when it’s not afraid to get crazy, it has also shone when it’s taken the time to take a hard look at the realistic, genuine problems people would face after civilisation has fallen. The tragedy of having a disease that would have been curable only a few years ago is as devastating as it is compelling, especially when it’s happening to one of the most beloved characters the show has left. And it gives an entirely different perspective to one of last week’s best scenes, when Michonne encountered the very depressed Ezekiel on the brink of ending it all.

“What It Always Is” gives the most screen time to Negan, freshly escaped from Alexandria. His Road to Redemption tour bus makes a very unexpected stop when he’s found by Brandon, a straight-up Negan fanboy. His father is one of the ex-Saviors taken in by Alexandria, but the kid was raised with stories of what a badass Negan used to be. Brandon automatically assumes his idol has escaped to make a new Sanctuary HQ and restart the Saviors and kick ass, and has even found and brought Negan’s old leather jacket and his bat Lucille – sans barbed wire, but that’s easily remedied when they come across a small, loose fence of barbed wire the Whisperers set up to mark their boundaries. Negan, clearly disturbed, tells Brandon to keep them for now. Brandon is the worst, exactly as he’s supposed to be. He toadies up to Negan, he tries to figure out the Saviors’ trademark whistle, and he rates zombies based on hotness because he thinks it’s something Negan used to do, all of which Negan wearily tries to ignore. When Negan runs into a bus to save a woman and her child from zombies, Brandon assumes it was to steal the cache of supplies he figures they have. Negan tries to politely tell Brandon to go home; when Brandon declines, Negan tells the teen to fuck off. Hurt and upset, Brandon fucks off.

Negan, of course, plans to get the woman and her kid safely to Alexandria (without getting close enough to the colony to be caught himself) and as Friend to All Children, has a touching and heavy-handed moment where he bonds with the kid by telling him what it was like to fly in an aeroplane. Of course, this is so Negan and the audience both feel worse when Brandon comes back and kills the woman and her kid, believing Negan’s dismissal was a test that could only be passed by killing innocents. Negan gives him a C+ for “Caving His Head in With Rock Repeatedly,” then grabs Lucille, puts on his jacket, and jollily saunters off into the Whisperers’ territory. There he making noise and killing zombies until the Whisperers arrive and Beta throws him to the ground. Satisfied, Negan says “Let’s do this,” and there the episode ends.

I suspect the episode wants us to think that Negan is really joining the Whisperers – as Brandon put it when he floated the idea earlier, the old “the enemy of my enemy is my friend” saw – and that by killing Brandon and reclaiming his bat and jacket, we’re supposed to worry he’s somehow reverted to his Savior mode. That’s utterly preposterous based on his post-timeskip character development, but the idea that even Savior-era Negan would want anything to do with the loons of the Whisperers is just as ludicrous.

However, I’m betting Negan will pretend to want to join up with Alpha’s crew, probably to betray them at some opportune time. This would be a very good thing for the Alexandrians because the Whisperers might be about to have their own spy. Aaron happens across Gamma early in the episode, where she cuts her hand while butchering a zombie and pushing its innards into a nearby creek. Aaron reveals himself, cautiously but peacefully, to toss her some bandages, and Gamma grabs them and runs off. Back at the Whisperer camp, Gamma confesses what happened to Alpha, who is delighted at the opportunity to have a loyal Whisperer who can pretend to defect. It’s a nice addition to her current plan to slowly and methodically cripple the colonies, which includes sending that small but constant stream of Walkers at them, throwing barbed wire up, and poisoning that creek with zombie guts. Oh! And Earl was right – the Whisperers definitely wrecked Hilltop’s tree.

I know I’m still grading The Walking Dead on a curve because I’m still surprised when I watch an episode and am entertained instead of getting increasingly furious at the terrible writing. Admittedly, I’m sceptical of Aaron’s very sudden transformation from massive Whisperer hater to Good Samaritan, and Negan’s storyline could go wrong. A couple of years ago I could have counted on the show to get it wrong, but we’ve been consistently getting solid, quality episodes like “What It Always Is” for over a year. I’m not saying I trust The Walking Dead to be perfect, and I expect it’s still going to screw up from time to time. But now I genuinely trust this show not to suck – and that’s a surprise and a delight. 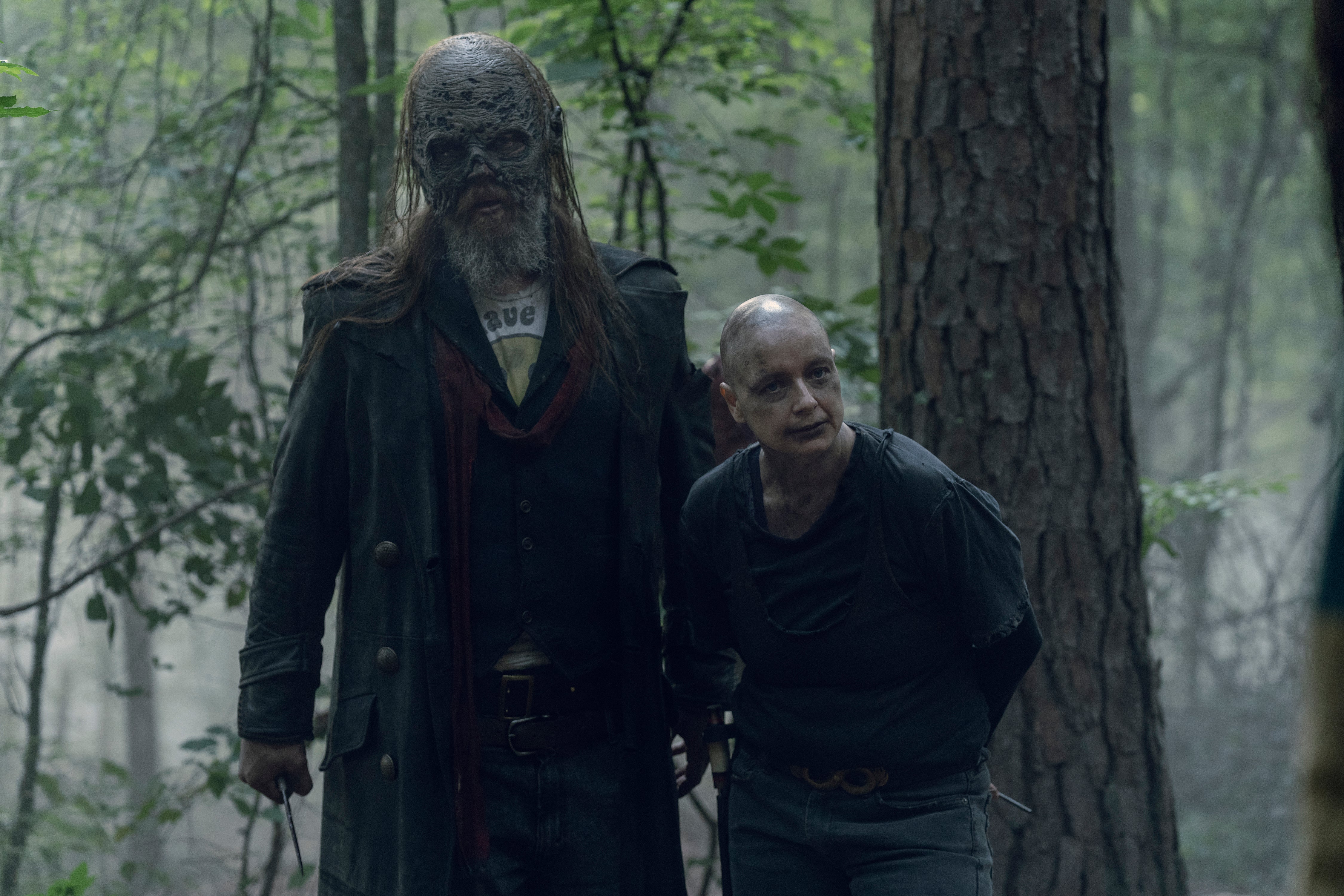 This picture of Beta (Ryan Hurst) and Alpha (Samantha Morton) makes me laugh. Not sure why. (Image: Jace Downs/AMC)