Photoshop for iPad Is Terrible. Here's What Needs to Happen to Make It Great

A year ago, Adobe revealed a potential game changer for the iPad that could help turn the tablet into a legitimate laptop replacement: the full version of Photoshop was coming to iPadOS. A year later, the mobile version of the long-revered photo editing app is finally here, and it’s a near unusable disappointment. Adobe has promised a steady stream of updates and improvements for the app, but I have my own suggestions for fixing Photoshop on the iPad.

At its Adobe Max 2018 conference in Los Angeles last year, where the company reveals everything from software updates, to new products, to even experimental features that are years off, Photoshop for the iPad was given a flashy main stage showing following the official announcement.

It’s always prudent to be sceptical of what you see during a stage demo as they’re carefully planned and choreographed to make a product look polished, fast, and intuitive. Adobe even admitted that what was being shown wasn’t the final version of Photoshop for the iPad given it was a year away from release, but the demo still made pixel pushers and photo editors – myself included – excited about finally being able to switch between a laptop and a tablet for serious image editing work. And then there was silence.

One of the first signs that Adobe potentially wasn’t going to deliver on its Photoshop for iPad promises in 2019 was the company refusing to nail down a date when the app would actually launch. Instead, the company and its representatives endlessly repeated “later this year” right up until the app randomly appeared on the iOS App Store a few days before Adobe officially confirmed its availability. Following an October article from Bloomberg revealing that beta testers were disappointed with Photoshop for iPad’s severely limited toolset, features, and functionality, Adobe ignored our own repeated requests for early access to the app, despite previously providing advanced copies of its other products, including Adobe Fresco for the iPad, released just a few months prior. 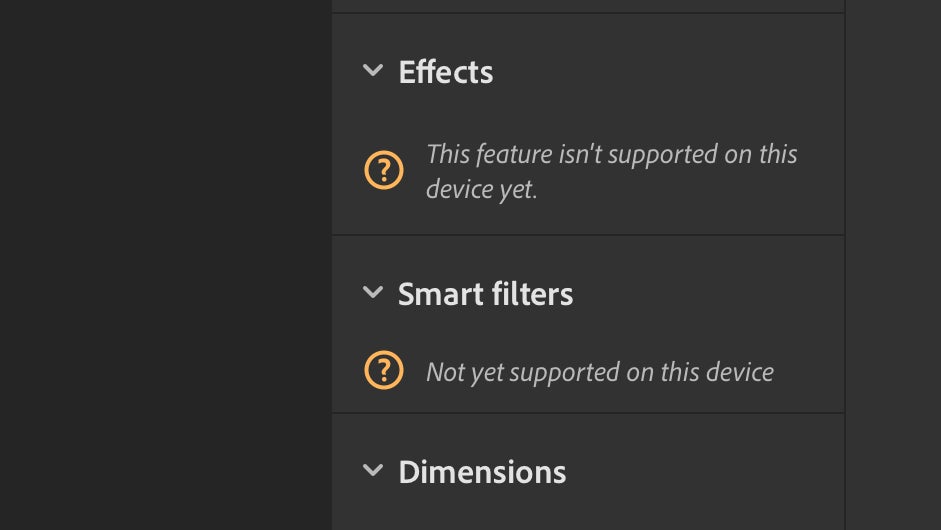 It’s now easier to understand why Adobe was being so secretive about the iPadOS version of Photoshop CC. To call it a disappointment is an understatement. As someone who’s been using Photoshop on a near-daily basis for almost the past two decades (since version 5.5 of the software) the new iPad version, which I’ve been working with for the past week, is nearly unusable – not just limiting. Longtime Photoshop tools and features that many artists rely on are completely missing, including the pen tool (which is critical for slicing up layers), RAW import, image filters, advanced masking options, the Curves tool, brush libraries, keyboard shortcuts, and a long list of other features that are inexplicably missing at launch. 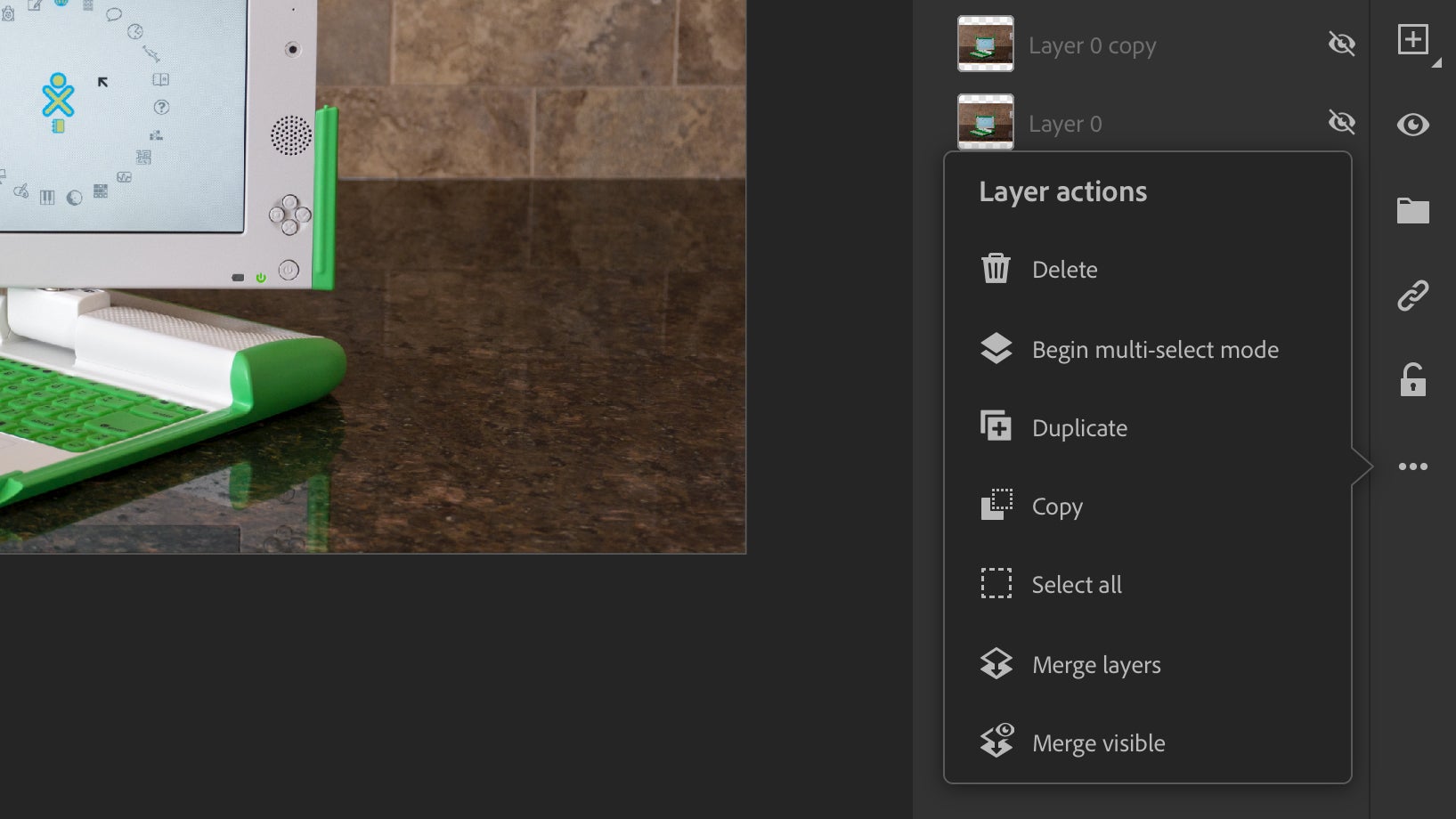 Adapting to Photoshop for iPad’s radical UI changes is the biggest challenge to using the new app. Common Photoshop functions have been moved around, or hidden under sub-menus, that just don’t feel intuitive. (Screenshot: Andrew Liszewski/Gizmodo)

With enough time I could probably adapt my workflow and put together a passable composite using Photoshop for iPad’s extremely limited functionality, but the bigger challenge has been trying to adapt to the confusing changes made to Photoshop’s interface on iPadOS. Very few tools or functions are where I expect them to be, and without the optional pop-up descriptors the desktop version offers, I find myself randomly clicking unfamiliar icons to see what they actually do. It’s confusing to the point of frustration and I’ll get to the point where I wonder why I’m even bothering before hopping back into the desktop version of Photoshop.

So what happened? That’s the question a lot of people are asking, but so far Adobe’s only response has been to point out that this is just the first version of Photoshop for iPad and it will evolve and improve over time through regular updates. For the launch the company wanted to focus on ensuring its new cloud-based PSD file format worked, and that the desktop and mobile versions of the app played well together. One of the biggest challenges of an app like Photoshop is to ensure that the images, photos, and graphics it produces are identical no matter what platform the software is running on. Files are often passed between artists working on Mac or Windows PCs, and the underlying mathematics that power Photoshop’s endless tools and filters have to produce identical results no matter the operating system or processor doing the number crunching. If I had to say one good thing about Photoshop for iPad, it’s that platform interoperability appears to work just fine.

Last month, Scott Belsky, the Chief Product Officer of Adobe Creative Cloud, told Bloomberg that “Launching every single feature that was accumulated over 25 years on the iPad on day one would not best serve our customers and the needs they have.” That statement perfectly sums up the problems I have with Photoshop for iPad. A year ago Adobe promised a full, unlimited version of Photoshop CC that would be so much easier to use on the go, but so far the company has only delivered a broken version of Photoshop that’s striving to mirror the accessibility and ease of use of the iPad – to its detriment. Experienced artists and photographers don’t want an iPad version of Photoshop, they just want Photoshop running on the iPad. 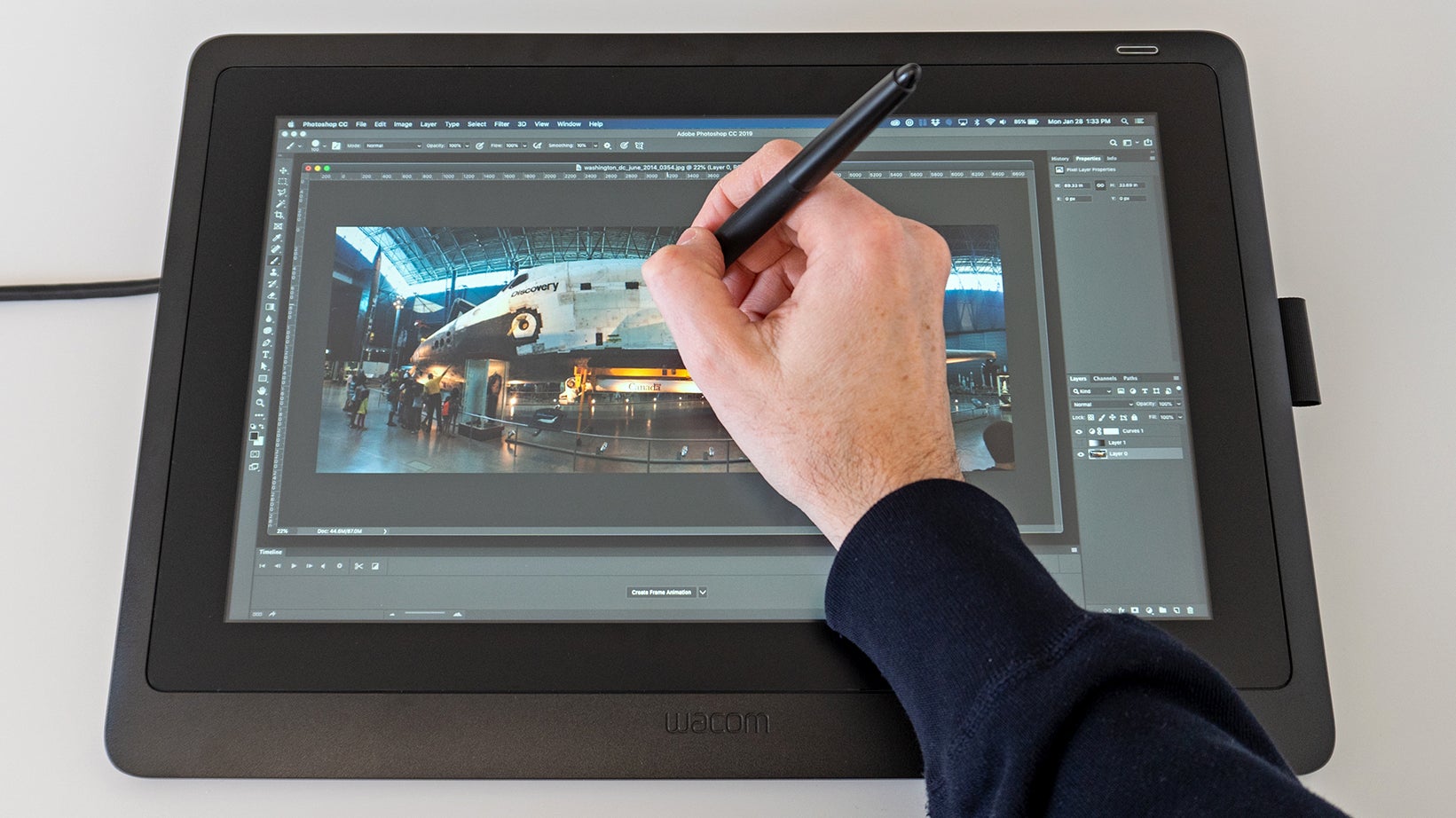 The desktop version of Photoshop running on a tablet device? What sorcery is this? (Photo: Andrew Liszewski/Gizmodo)

A tablet-friendly version of Photoshop doesn’t need to be a dumb-downed experience. In fact, artists have been happily using the full version of Photoshop on tablets for over a decade now as that’s exactly the functionality that Wacom’s Cintiq line, which serves as a secondary touchscreen display allowing the desktop version of Photoshop to be navigated and operated using a stylus. That’s exactly what I want for the iPad, the full Photoshop desktop experience on a tablet that’s lighter, more powerful, and considerably cheaper than a Wacom Cintiq – even if I have to dig through settings to activate the app’s alternate ‘pro’ mode.

Some will argue that the iPad’s limited resolution would make the full version of Photoshop CC running its traditional UI layout too cluttered and unusable. I disagree. I have little trouble using Photoshop CC on my 2015 MacBook Pro without an external monitor. It’s screen resolution (2,560 by 1,600 pixels) actually offers less pixels than the 3rd Generation iPad Pro (2,732 by 2,048 pixels) which I’ve been using to test Photoshop for iPad. Instead of dramatically changing the Photoshop interface to be more touch-friendly and behave like other tablet apps do, Adobe could instead optimise Photoshop’s familiar interface to max out the iPad Pro’s generous resolution but smaller screen size – and I don’t think a single pixel-pusher would be upset about losing touch functionality as long as a stylus was still an option. 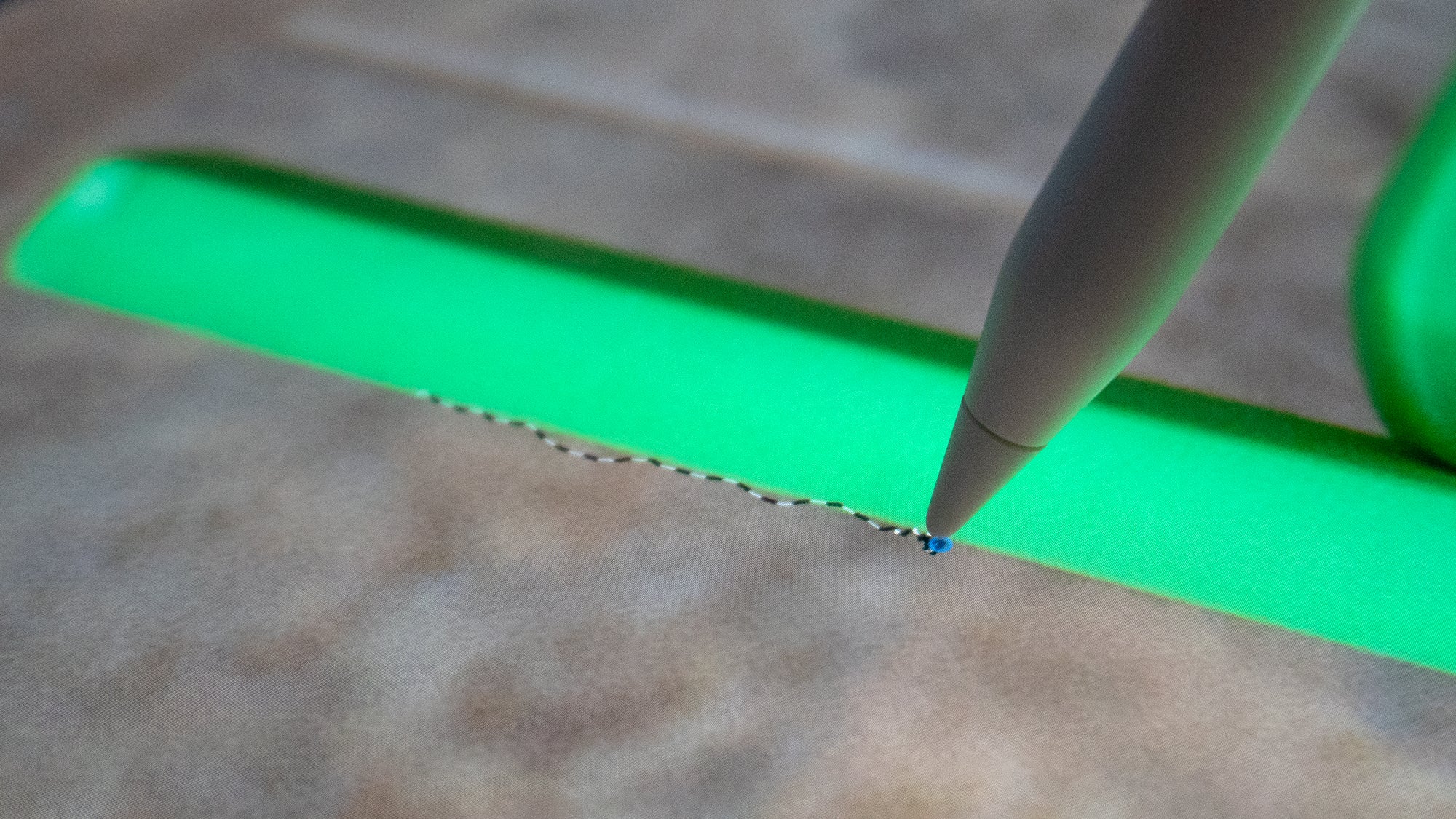 The Apple Pencil is excellent hardware, but not optimal for photo editing work. The smaller tip on a Wacom stylus feels better suited for detailed pixel-pushing. (Photo: Andrew Liszewski/Gizmodo)

There’s also no denying that the second-generation Apple Pencil is a brilliant piece of hardware with its minimal lag and clever ability to wirelessly charge on the tablet itself, but Photoshop for iPad is already begging for a ‘pro’ version of the Apple Pencil. I find its tip too thick and visually intrusive for precise masking and selection work, and the lack of customisation buttons, including an eraser on the bottom, seriously limits the potential for streamlined and optimised workflows. I’m not claiming Wacom has perfected the stylus, but the company has been refining its hardware for decades now and there’s a good reason why its tablets are still an industry-standard tool amongst creative types. I don’t care if my button-covered stylus looks ugly while I’m racing a deadline.

I completely understand why Adobe wants to make Photoshop for iPad accessible to a wider user base; there’s the potential for millions of new users to cough up the monthly subscription fee to the company’s Creative Cloud service. (The cheapest way to use Photoshop on your iPad is a £10 a month plan if you’re not already a Creative Cloud subscriber.) But as Adobe tries to woo new users, it’s making a tool that could dramatically change and improve how artists work inaccessible and even hostile towards its existing user base. In its current form, Photoshop for iPad is Photoshop in name only. Adobe promises that over time its feature set will improve and expand, but from what I’ve seen it’s going to take a lot more than just a slow trickle of old and expected features to make transitioning away from the desktop version of Photoshop worth the hassle.