The Kincade Fire, in the US state of California, has been burning for over two weeks now, and mercifully the blaze is now mostly contained. The scope of the damage, however, has been extensive, as this disturbing new satellite image reveals.

This image was taken at 11:01 am local time (7:01 pm GMT) on 3 November 2019 by NASA’s Terra satellite, according to a NASA Jet Propulsion Laboratory press release. The Terra satellite is equipped with a special instrument, called the Advanced Spaceborne Thermal Emission and Reflection Radiometer (ASTER), that uses thermal infrared channels to detect heat on the Earth’s surface. 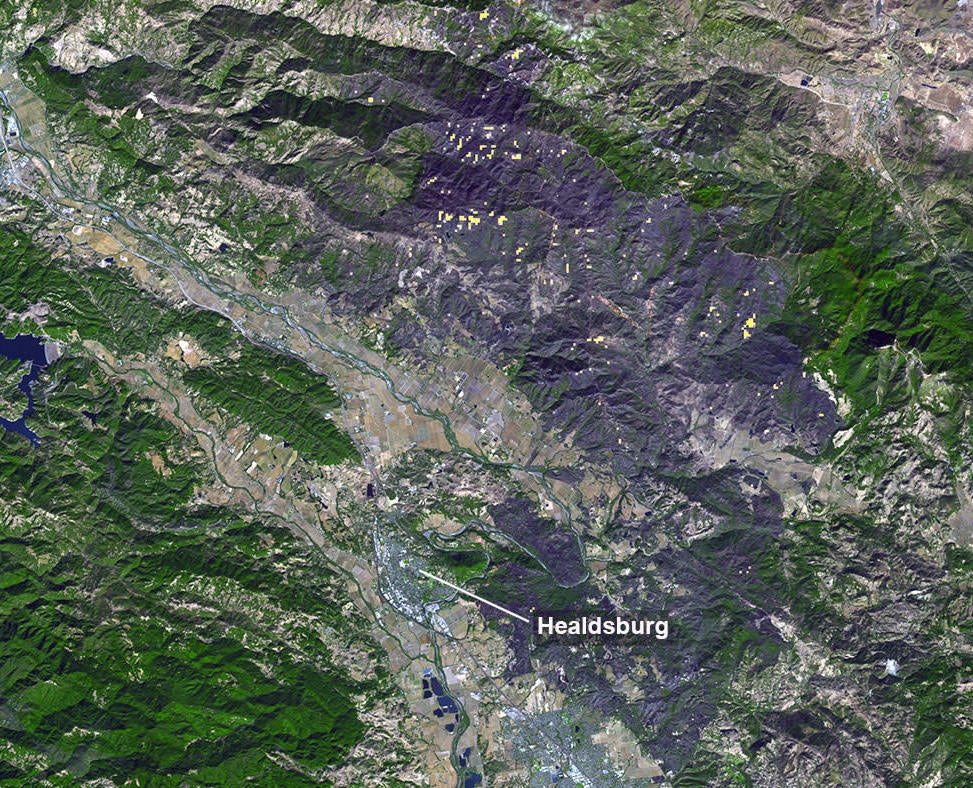 Burnt areas are shown in dark grey, while the ongoing wildfires appear as yellow dots. The town of Healdsburg, with a population of 11,254, can be seen to the south and east of the ominous dark grey splotches.

The Kincade Fire started on the evening of 23 October 2019, triggering a wave of evacuations. By 5 November, some 77,758 acres had burned and 374 structures were destroyed, according to the California Department of Forestry and Fire Protection. As ABC News reports, the wildfire is now 80 per cent contained and all evacuation warnings have been lifted. The Kincade Fire is now the largest of the 2019 California wildfires and the largest ever for Sonoma County, per the Washington Post and Sonoma Magazine.

The cause of the fire is still under investigation, but it started when heavy winds were blowing across much of California. The fire may be connected to a downed power line belonging to the Pacific Gas and Electric Company, reports the San Francisco Chronicle.

..Every year, as the fire’s rage & California burns, it is the same thing-and then he comes to the Federal Government for $$$ help. No more. Get your act together Governor. You don’t see close to the level of burn in other states...But our teams are working well together in.....

These fires and their associated blackouts may represent a new normal for Californians, and it’s an open question as to who should front the cost. Sadly, President Donald Trump is waging a personal war on the state of California, ostensibly due to its lack of political support, and he’s threatened to cut off federal wildfire aid. Apparently California didn’t heed the president’s memo about using rakes to prevent wildfires.