The human brain is even more incredible than we thought, a new study out of Israel suggests. Doctors there say they’ve found people who can smell just as well as anyone else, despite missing the key area of the brain responsible for olfaction.

According to the researchers, who published their work Wednesday in Neuron, the discovery was a complete accident. They had been looking through brain scans of young, left-handed female volunteers for another smelling-related study when they came across something unusual. One of the volunteers seemed to be lacking the olfactory bulb, a tiny structure near the front bottom of the brain.

The olfactory bulb takes in information from the receptor nerves in the nasal cavity. These receptors pick up on odour molecules, like the ones that waft from the sausage rolls in Greggs. The bulb filters and relays those signals to other areas of the brain, which translate the information and make us consciously perceive a particular smell (including its emotional importance to us). Without the middleman of the olfactory bulb, it’s long been assumed, people simply can’t smell the world around them.

But according to the volunteer’s self-reporting, she had no trouble with her sense of smell at all. And they soon found scans of another woman with no olfactory bulb but seemingly a seemingly normal sense of smell. Intrigued, they then turned to data from the Human Connectome Project, a US-based venture that’s been collecting and studying the MRIs of healthy volunteers since 2009. Out of more than 1,100 people in the project, the team found three more people with missing bulbs – all women and one left-handed.

Finally, the team reached out to the two volunteers, who agreed to undergo tests of their brain and their ability to smell. In various experiments, these women were compared to healthy volunteers, as well as to a woman who was born with no olfactory bulb and almost no sense of smell, a condition called congenital anosmia. Sure enough, the tests found that the brains of these two remarkable women seemed otherwise completely normal, as did their overall sense of smell compared to women in their same age group. 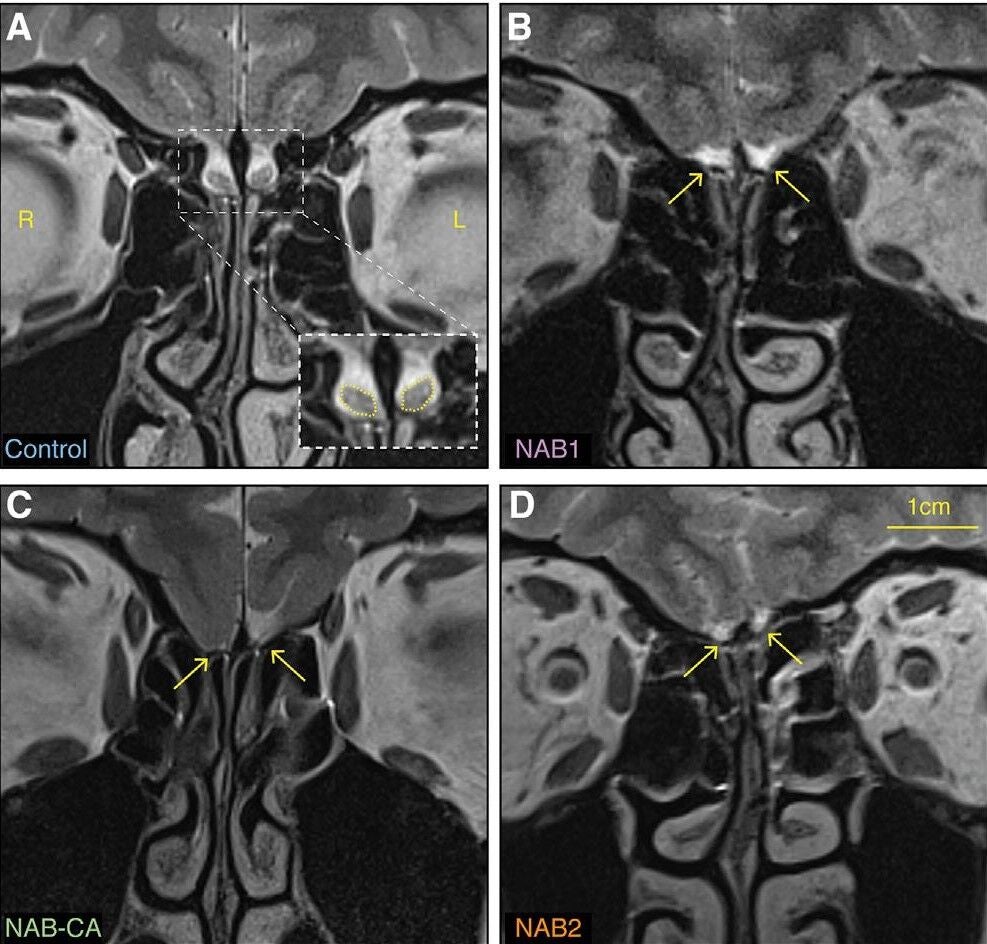 The authors are careful to point out that their data can’t definitively explain why exactly these women still have the ability to smell. It’s possible, for instance, that they have tiny but functioning olfactory bulbs that are too small to be seen in brain scans. But the most likely scenario, according to the researchers, is that the cases are a newly discovered and extreme example of the brain’s ability to rewire itself to stay healthy – otherwise known as brain plasticity.

Though brain plasticity can be seen throughout our lives, it’s typically most potent in our younger years. And in these women, they theorise, their brains somehow managed to create a replacement for the spherical hubs found in the bulb that connect our noses to the rest of the brain, which are called glomeruli.

“The simplest interpretation of our findings is that these women were born without an olfactory bulb, but thanks to the extreme plasticity of the developing brain, they developed an alternative glomeruli map somewhere else in the brain, not in the olfactory bulb,” said senior author Noam Sobel, a brain researcher at the Weizmann Institute of Science in Israel, in a statement released by Weizmann. “Although such plasticity is amazing, it is not out of the realm of what we have seen in human development.”

Amazing as this discovery is, there are still a lot of mysteries to unravel. In the population data, about 0.6 per cent of women and 4.25 per cent of left-handed women seemed to have this unique trait. But other, preferably larger studies will have to confirm whether that’s really how often this happens, as well as why there’s an apparent connection between being a woman and left-handed to this adaptation.

It’s also important to confirm and better understand how this rewiring happens. In the smell experiments, the two women’s perceptions of smell were much closer to each other’s than were the perceptions of any other pair. That could suggest that the rewiring happens in a very precise way. And if we figure out the specifics of this process, it might eventually be possible to help people born with no olfactory bulb to learn how to smell. But for now, it’s worth marvelling at just how fortuitous this discovery turned out to be.

“The history of neuroscience is full of important observations that were initially made in only one person,” the authors wrote, likely referencing the case studies of Phineas Gage, H.M., and others. Their two patients, called NAB1 and NAB2, could very well join that list someday.