News on endangered species is often not good. It comes with the territory. But every now and then there are success stories of species starting to crawl back from the brink. New findings raise cautious hopes for one of the world’s rarest and most critically endangered reptiles.

Gharial crocodiles numbers have plummeted around 90 per cent in their historic range due to habitat loss and hunting. Scientists estimate there are only around 650 adults left in 14 separate locations in India and Nepal, and they’re listed as critically endangered by the International Union for the Conservation of Nature. Of those 14 locations, only five are believed to have breeding gharials and only one was in Nepal.

Chitwan National Park was thought to be the only breeding site in the country, until now. In June, a research team spotted about 100 hatchlings in a remote location in heavily forested Bardia National Park in southwest Nepal, close to the border with India and several hours from any major settlements. That could bolster chances for the species’ survival.

“Given the species is limited to around five populations across its entire range, this is such a positive discovery, and a critical step for the long-term recovery of the species in Nepal,” Rikki Gumbs, one half of the research team and a PhD fellow with the Zoological Society of London (ZSL), said in a press release.

Gharials – which owe their name to mature males bulbous growth on their snout that resembles a traditional Indian cooking pot called a ghara – were last confirmed as breeding in Bardia in 1982. Concerted efforts to determine if the animals reportedly resident there were doing so again began in 2017 when Ashish Bashyal, a conservation scientist with the Biodiversity Conservancy Nepal and ZSL EDGE fellow, helped create the Nepal Gharial Conservation Initiative. The project is aimed at better understanding and protection of the country’s gharial populations estimated at about 200 animals including the new arrivals. 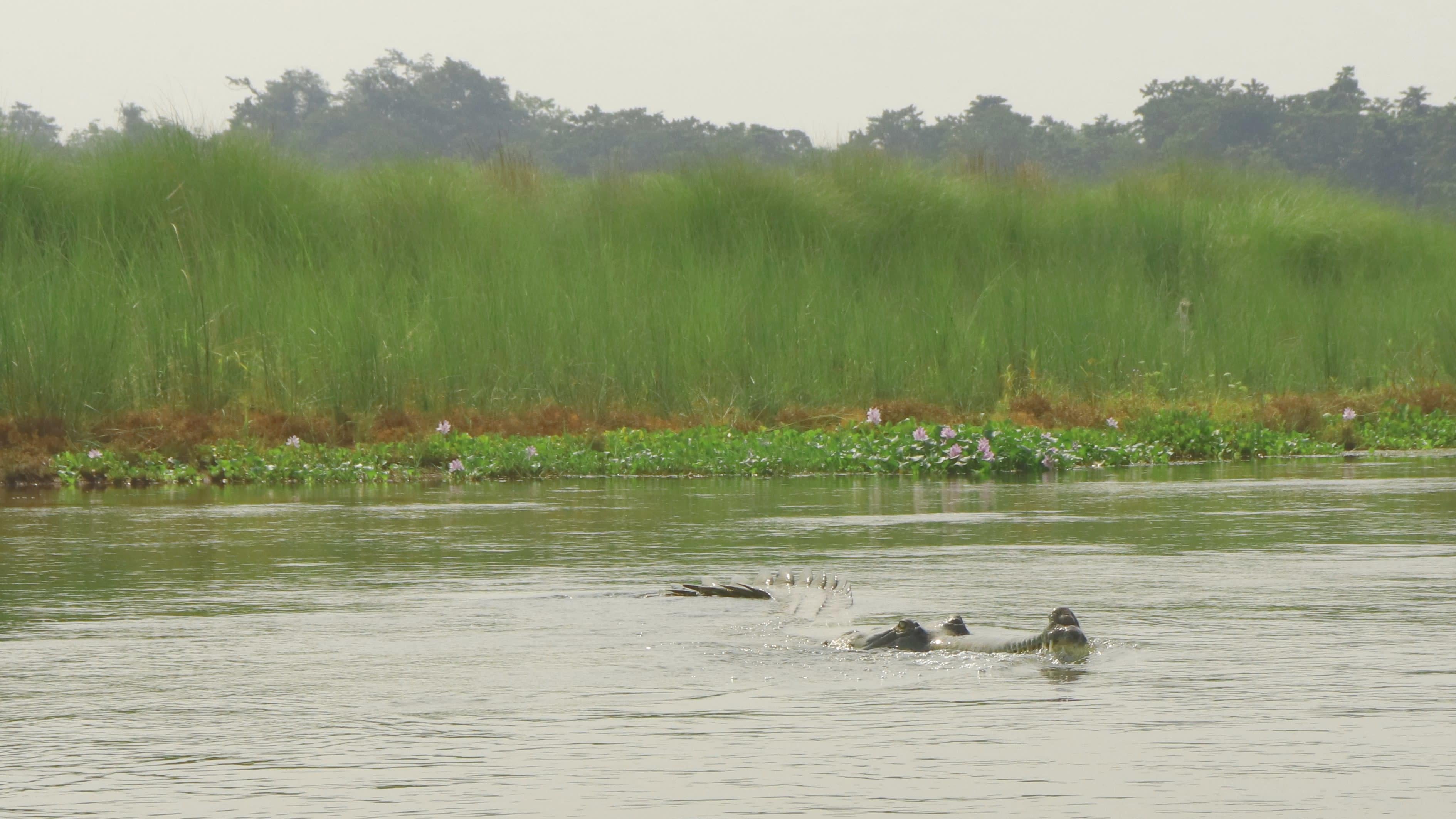 Speaking to us from the city of Butwal, around 270 kilometres (167 miles) to the west of the Nepali capital Kathmandu, Bashyal said that while initial surveys in Bardia were promising, he was frustrated.

“Something that was bugging me was that we had been working there for almost three years, had conducted more than three surveys, but we had never found hatchlings, baby gharials,” he said. “So they are out there, they have good habitat, there are adult males, adult females. So on the surface everything is in place for them to breed and reproduce… but we were not finding any babies.”

After witnessing frisky behaviour – including attempts at mating – that indicated the adults were potentially breeding in February, Bashyal and Gumbs decided to head to the potential breeding site in June this year when the gharial young in theory would be hatching. But talking about visiting the site was much easier than getting there.

“I would say the Bardia national park where we found the nest, is one of the wildest places in Nepal both in terms of it is really untouched and it is full of megafauna such as tigers, rhinos and elephants. It’s in the middle of the valley so just getting there is really challenging,” Bashyal said.

The trip had echoes of vintage movie Planes, Trains and Automobiles. Getting to the location via raft was the researchers’ preferred option, but low river levels in the dry season ruled that out. Option B was taking a four by four through the valley on a five-hour, 50-kilometre (31 mile) journey. But flash flooding two days ahead of departure scuppered the jeep option meaning the scientists had to go old school and walk. Despite an early start from a remote village they had driven to, Bashyal said the remaining 10-kilometre (6.2 mile) hike was brutally hot and humid with temperatures hovering around 40 degrees Celsius (104 degrees Fahrenheit) for the four hours it took them. If that was not enough of a slog, the odd sighting of a tiger track kept them on their toes.

In the end, the effort was rewarded. The pair found 100 gharial hatchlings merrily swimming around, a sight Bashyal describes as “incredible”. But despite the good news, the first few months of a hatchling’s life are the most crucial. Summer monsoon rains in Nepal meaning many young can be swept downstream and fail to survive. However, Bashyal did a quick follow up survey this fall and found that a number of hatchlings were still in the same location meaning hopes are now high the Bardia breeding population could be there to stay. A gharial hatchling being held by a ZSL researcher. (Photo: Ashish Bashyal/ZSL)

“Understanding whether gharials were breeding in Bardia National Park was considered to be a top priority for the species,” Gumbs said. “Upcoming plans to divert nearby river systems – which would likely have an impact on the habitat and quality of the river for gharial – are currently underway.”

Attention will now be focused on monitoring the newly discovered population and plans to expand citizen science efforts such as the “Gharial Guard Groups” that operate around Chitwan Park are underway. Awareness about why the animals matter to the ecosystem and why they aren’t necessarily a threat to humans will be key in allowing the species to thrive. Adult gharials are imposing as they can stretch to five metres (16 feet) in length and weigh around 250 kilograms (550 pounds). Bashyal said that he still encounters a fear and contempt of crocodiles in some areas of remote Nepal that he travels to.

But he said that better education and awareness means attitudes are changing. Nepal has also developed a strong recent record on protecting tigers. And as for the gharials themselves, Bashyal said there’s no need to be afraid.

“Gharial are very calm compared to other species,” he said. “They have a longer snout that is developed for hunting fish, so while it is always important to have a first defence against these larger animals, I would say gharials pose no harm to humans.”

The decline in the gharial population – which numbered in the tens of thousands in the 1940s – was initially caused by river modification with dams and the fragmentation of habitat. Gharials getting tangled in fishing nets as bycatch further contributed to their decline as did intentional hunting for their skins and eggs. Hunting and egg collection have since been banned, but additional threats today include the overwhelming and irreversible loss of riverine habitat due to continued construction of dams, irrigation canals, sand-mining, pollution, and agriculture. Bashyal said protecting rivers from these types of activities will not just help gharials.

“Ecologically, I always like to emphasise the fact that they are like the tiger of the rivers,” he said. “They are an umbrella species, so if we protect our waterways, protect our gharials then that will benefit other endangered species we have such as the gangetic dolphin and the smooth-coated otter.”