Some Arctic Sea Ice Is Acting Like It's Mid-Summer

Winter has extended its grip on the Arctic, dropping a curtain of darkness on the top of the world. But at least one part of the Arctic is resisting its grasp.

In what’s becoming an unfortunately common story, sea ice growth is stalling out in one of the gateway seas leading to the heart of the Arctic Ocean. The Chukchi Sea currently has a sea ice extent more reminiscent of summer than early winter, a sign that something is not right in the waters at the highest latitudes of the globe.

The Chukchi Sea sits between northern Alaska and Russia. That makes it a crucial bridge to the Bering Sea, a place for sea to latch on and spread its icy tendrils to the south. But this winter so far has seen ice suffer. After bottoming out in September, the ice in the Chukchi Sea has failed to rebound. Usually, the dip in temperatures coupled with the lack of sunlight causes ice to build back up quickly. This year, though, growth has been much slower. Sea ice data crunched by University of California, Irvine PhD candidate and Arctic watcher Zack Labe shows that ice extent is the lowest on record for this time of year by a long shot. 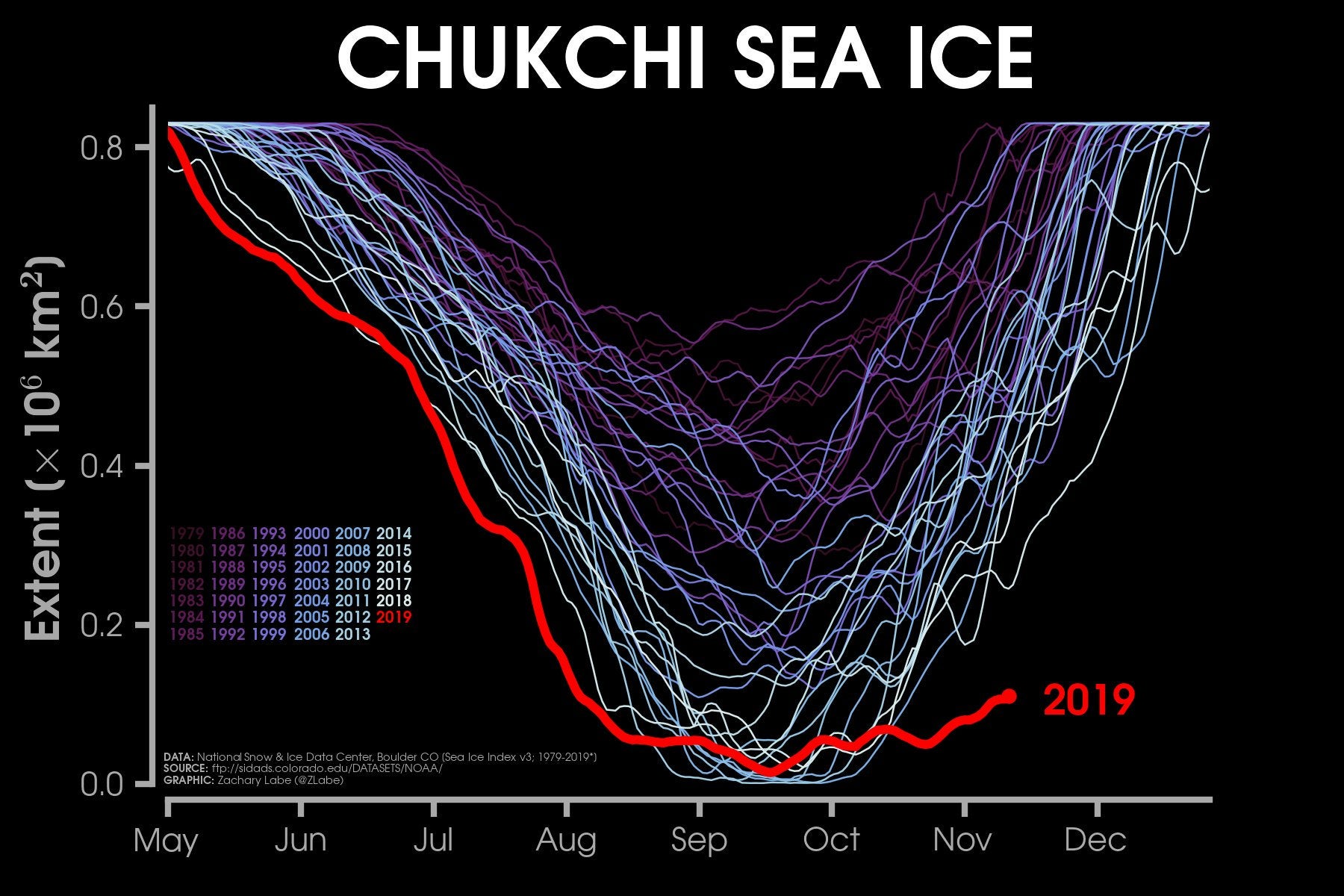 Arctic sea ice as a whole sits at its third lowest extent on record for this time of year and is well below both the long-term average. Part of the reason for the sluggish growth ties to this spring and summer of sweltering discontent. Temperatures were abnormally high much too often. It reached nearly 35 degrees Celsius in the Swedish Arctic, lightning (which generally requires warm, humid conditions) struck near the North Pole, and the northernmost settlement on Earth hit 21 degrees Celsius for the first time ever. That’s just a smattering of all the ways the Arctic was fucked this summer (don’t even get me started on the fires), but they all point to the culprit likely driving weak sea ice growth: heat, and lots of it.

The intense heat this summer helped melt ice. This year’s Arctic sea ice minimum was the second lowest on record. That in turn meant more dark, open water was available to absorb the sun's rays and heat up itself. So even now that the sun has gone down for much of the Arctic, the last rays of summer are still very much present in the form of toasty (by Arctic standards) waters and making it hard for sea ice to form.

This feedback loop is one of the hallmarks of climate change. Carbon pollution has warmed the Arctic twice as fast as the rest of the world, and the system has rapidly destabilised in recent years. The more plentiful fires and melting permafrost are releasing more carbon that will further speed up the changes. Meanwhile, disappearing sea ice and thus more open water will ensure the region continues to heat faster than the rest of the world. The vicious cycle has put the Arctic on the brink of a tipping point into a more volatile state unrecognisable from the Arctic we know today. If you want to know what the transition could look like, the Chukchi Sea is offering quite the lesson right now.