The Best Music Streaming Services If You Don't Want to Pay

Chances are you’re already signed up for at least one music streaming service, but if you’re not willing or able to pay a subscription fee for your listening, what are the options open to you? Several streaming platforms let you listen for free, with a few ads and restrictions, so we’ve rounded up what each of the best ones has to offer.

Obviously, we’re having to discount the services that don’t give you a free tier option, like Apple Music and Tidal (though free trials are available on those platforms, and you can sign up and cancel month by month).

If you’re on Spotify’s free tier, you still have access to all its apps on the web, on Windows and macOS, and on Android and iOS – you just can’t do quite as much with them without paying. Free Spotify works with Alexa speakers and Google Assistant speakers now as well, whether you want a mix or a custom playlist.

The usual selection of recommendations and popular playlists is virtually unchanged from the Premium tier, so it’s easy enough to queue up something to play. Creating custom playlists is fine, too. 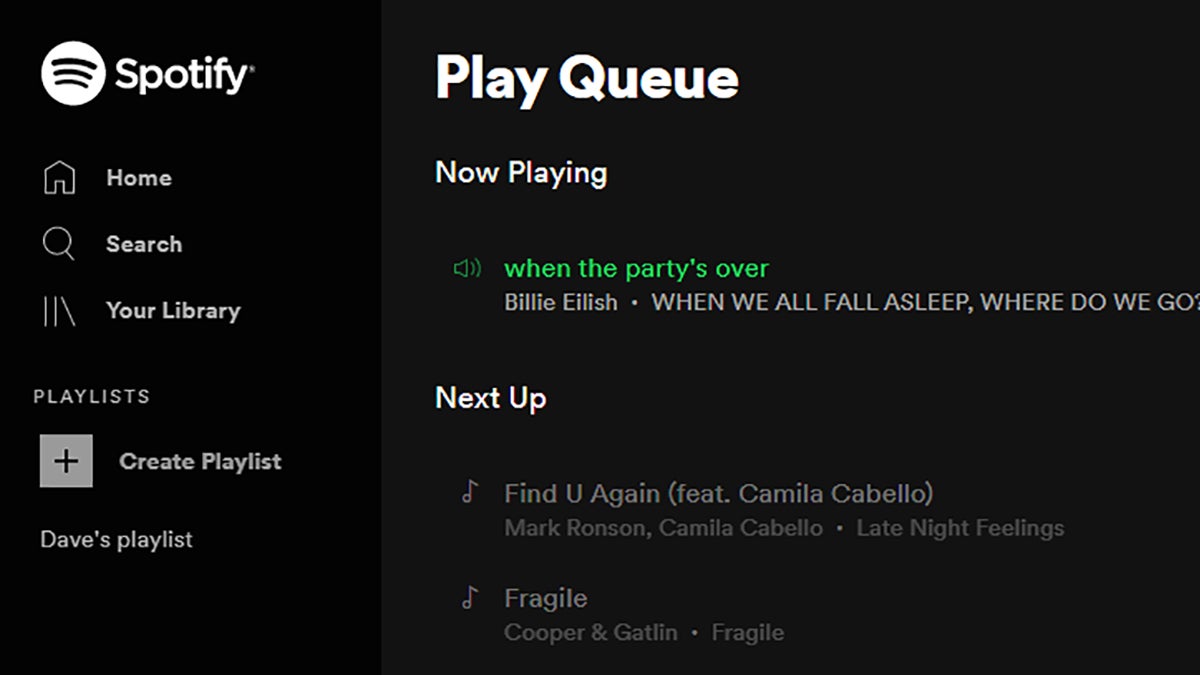 When you’re inside playlists, you can jump forwards and backward one track at a time, and jump around in custom playlists too. You can’t skip ahead several tracks in auto-generated playlists (such as your Daily Mix) as you can with Premium.

All this comes with ads, of course, which arrive roughly every 15 minutes after the first interrupted 30 minutes for each new streaming session. Video and audio ads can be skipped if you want.

A few more restrictions come with the free version of Spotify on mobile: You can’t save songs for listening offline, you can’t access the highest audio quality for your streams, and listening outside of your home country is capped at 14 days. 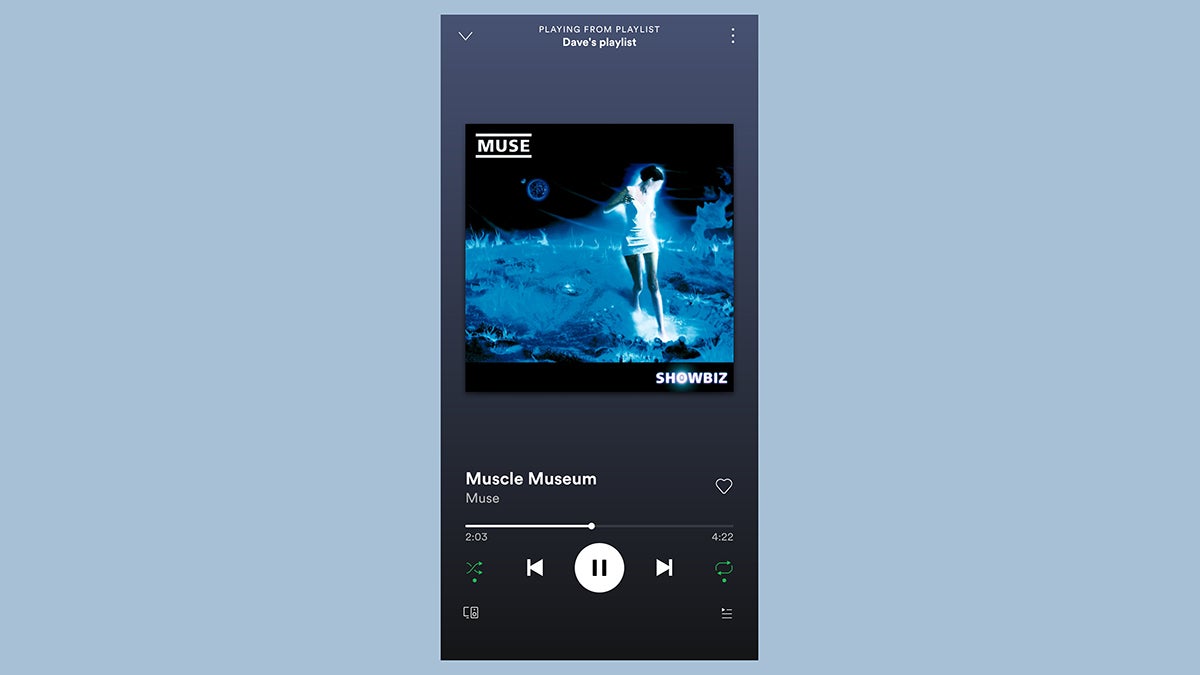 Most of your playlists have to be in shuffle mode on mobile. (Screenshot: Gizmodo)

The mobile apps also limit you in terms of selecting tracks inside individual playlists: This is only available on “selected playlists,” Spotify says, which is basically some of the auto-generated playlists. For albums and custom playlists, you’re limited to shuffle mode and up to six skips an hour.

Spotify clearly sees the free tier as crucial for getting future paying customers interested, and it gives you a fair amount of flexibility and functionality for no money at all, especially in terms of the desktop clients. If you decide the free tier isn’t enough, however, you’ll have to fork over £10 a month.

As of very recently, you can use Amazon Music for free on the web, Android, iOS, and Echo smart speakers, even if you’re not paying for Prime. You only get access to 2 million songs, rather than the roughly 50 million on the paid Amazon Music Unlimited, which will run Prime members £8 a month or £10 a month if you don’t have Prime.

Not only are there a lot fewer songs on the free Amazon Music, but it’s also pretty restrictive in terms of what you can actually do with it: You can’t just pick a song from an album. If you do, you’ll just launch a radio mix based on that song (though it won’t include the song you originally picked). 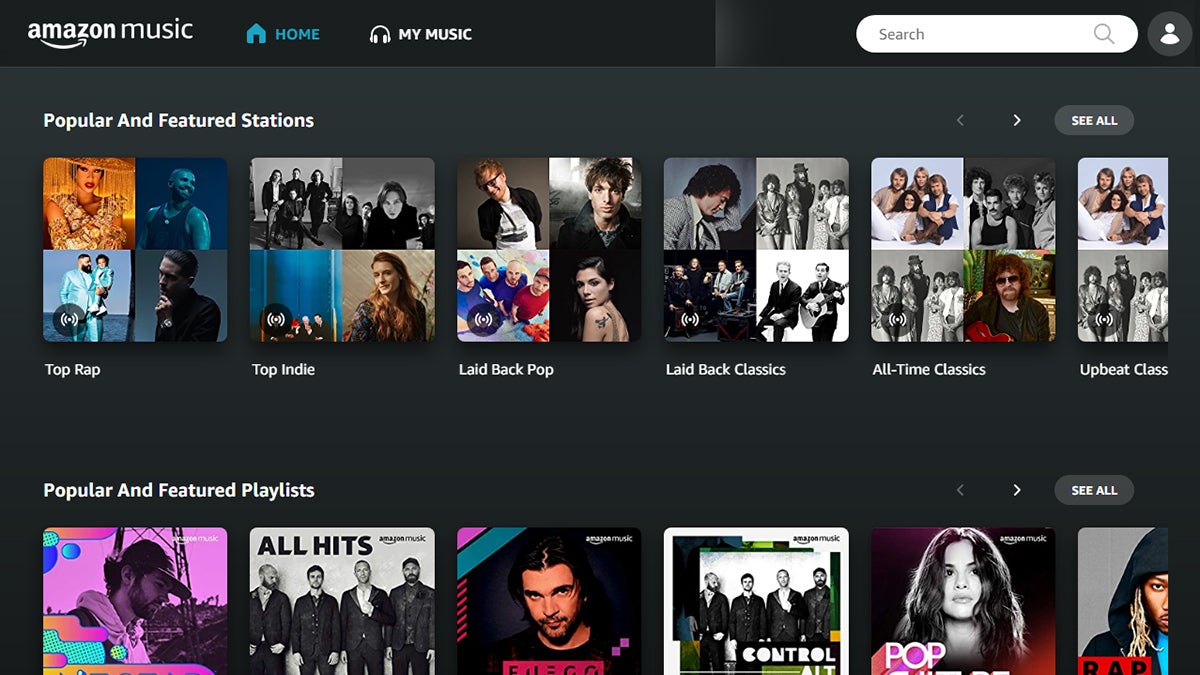 You don’t get any custom playlist options on the free Amazon Music. (Screenshot: Gizmodo)

You can skip tracks, but only a limited number of times. You can’t see what’s coming up, and then there are regular ad breaks to interrupt the music too... and they seem to be a lot more regular than on a service such as, say, Spotify. As for creating custom playlists, that’s completely off the table with the free tier of Amazon Music.

With that in mind, it really isn’t for those who want to pick out individual songs – but if you just need a mix or a mood it’s fine. At least it’s easy to operate and jump into, and the choice of stations and playlists is decent.

Fire up the mobile apps, and you’ll find the same restrictions are in place. All your listening is recommended for you rather than on-demand, there are plenty of ads, you can only skip so many times, and of course, there’s no sign of offline syncing. 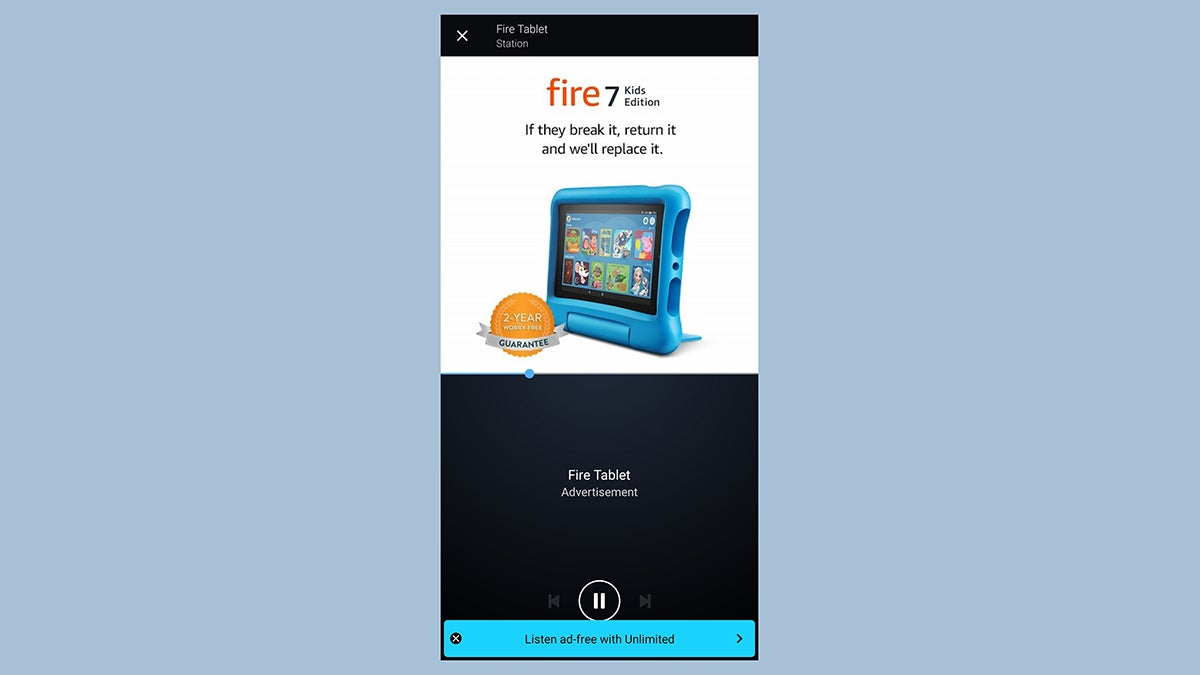 At almost every turn, you’ll come across adverts for Amazon Music Unlimited, and Amazon will be fairly aggressive in trying to get you to upgrade (just like it is with Amazon Prime on its main site, in fact).

In terms of comparing free tiers on music streaming services, Amazon Music is some way behind the other options here. If you just want the occasional tune out of your Echo, then it makes sense, but that’s about it. Actually, its sole purpose seems to be to offer basic, out-of-the-box music playback on its smart speakers.

Deezer might not be as well known as the other options here, but it does offer a completely free tier, which gives you access to the streaming service on the web, the desktop clients, Android, and iOS.

When you start up the apps you get a tonne of recommend playlists, including mixes of your favourite artists, mixes based around genre, recommended new releases, and more. On desktop and on the web, you can search for specific tracks and albums, create your own playlists, and play them all on-demand. 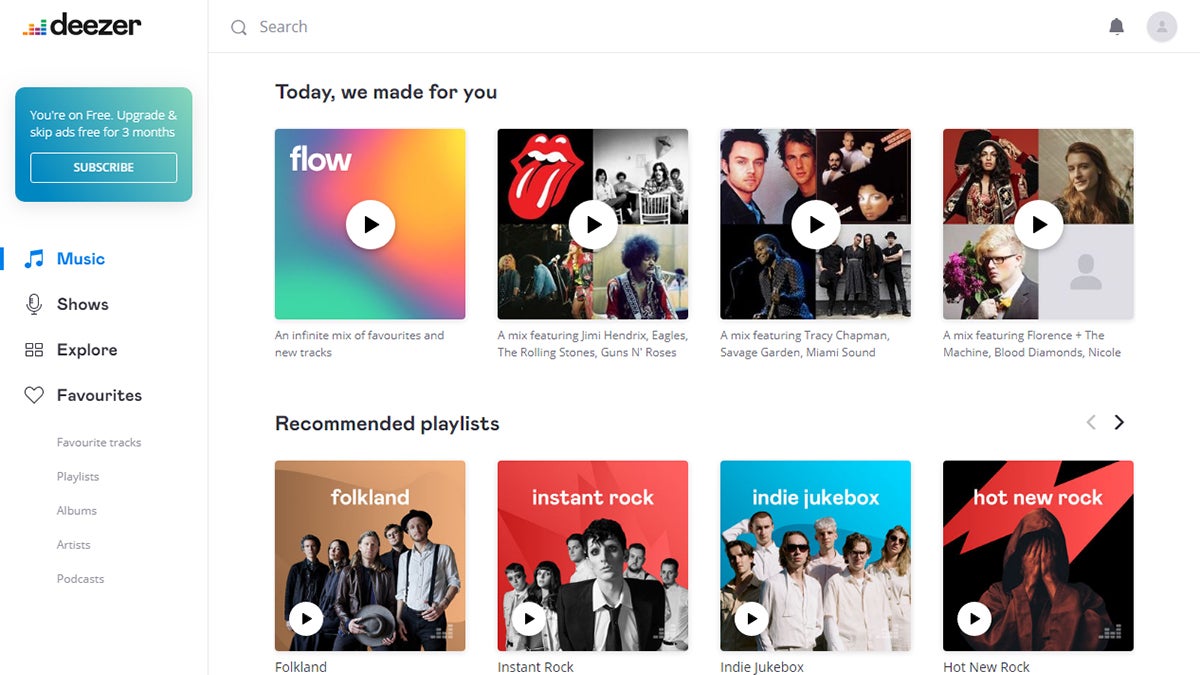 If you’re on the free Deezer tier, it’s best sticking to your laptop. (Screenshot: Gizmodo)

You get ads, as you would expect, but they’re relatively few and far between, based our tests, and you can click through as many track skips as you like. Unlike, say, Amazon Music, you can see everything in your play queue and jump around it as you like.

On mobile, Deezer becomes more restrictive: You can’t listen to your own playlists, only mixes based on them. You’re limited to six skips an hour as well, plus all the usual restrictions – no syncing playlists to your phone for offline listening, occasional ads, and no access to the very highest level of audio fidelity.

You can shuffle through specific playlists recommended by Deezer, track by track. But for listening to your own music, it’s much less helpful (though you can continue to add to playlists you’ve already made). Unless you’re doing the majority of your listening on your computer, the free version of Deezer doesn’t give you much to work with. 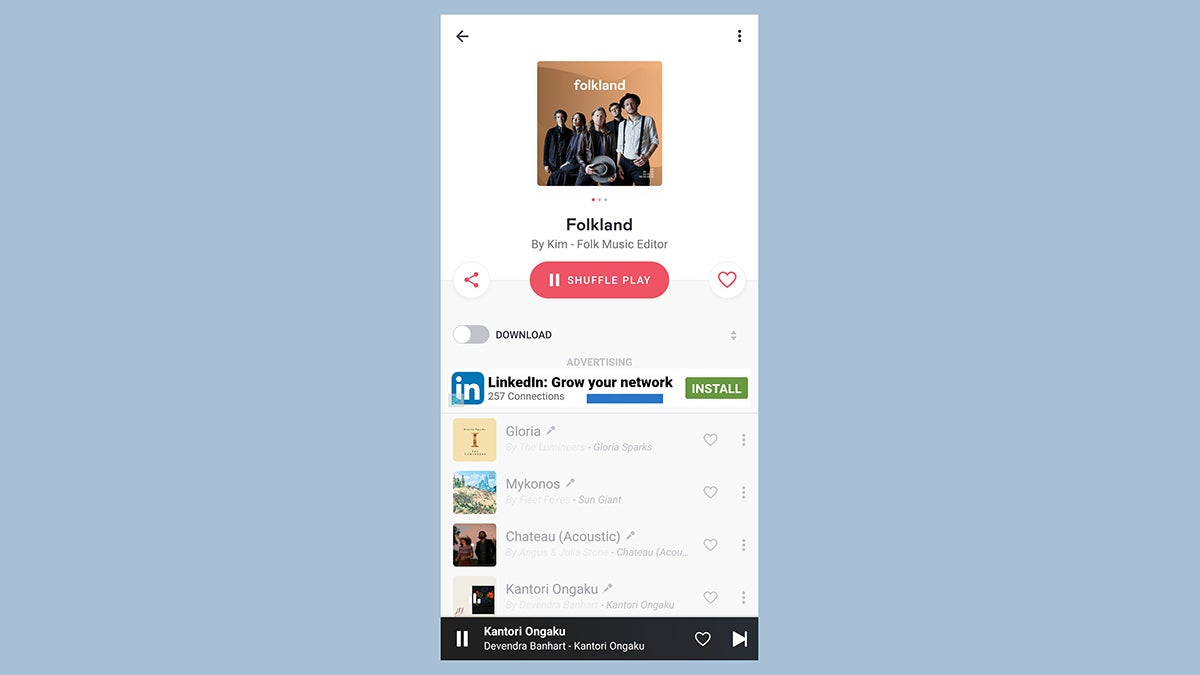 Only certain pre-approved playlists are available in the Deezer mobile apps if you aren’t paying. (Screenshot: Gizmodo)

The app as a whole (including a premium option, which is £10 a month, or £15 a month for Deezer Family) is well worth a look – it has an interface, a catalogue, and a list of features to rival Spotify and Apple Music – but, as mentioned, the free tier shows some gaps once you switch to mobile.

One extra point to add: You need a paid Deezer subscription to use the service on devices apart from your computer or your phone, including smart speakers, game consoles, and so on.

If you’re not paying for YouTube Music (or YouTube Premium, which comes with YouTube Music), you can still load up the app on the web, Android, and iOS. The free tier works with Google smart speakers too, though you can only ask for moods and mixes, not specific songs or albums.

In the main apps, you’ve got the usual choice of algorithm-generated and popular playlists that YouTube Music serves up for you: Acoustic Pop, All-Time Laid-Back Hits, Good Vibe Rap, Top 100 Music Videos, Dance Hotlist, a selection of newly released music, and so on. 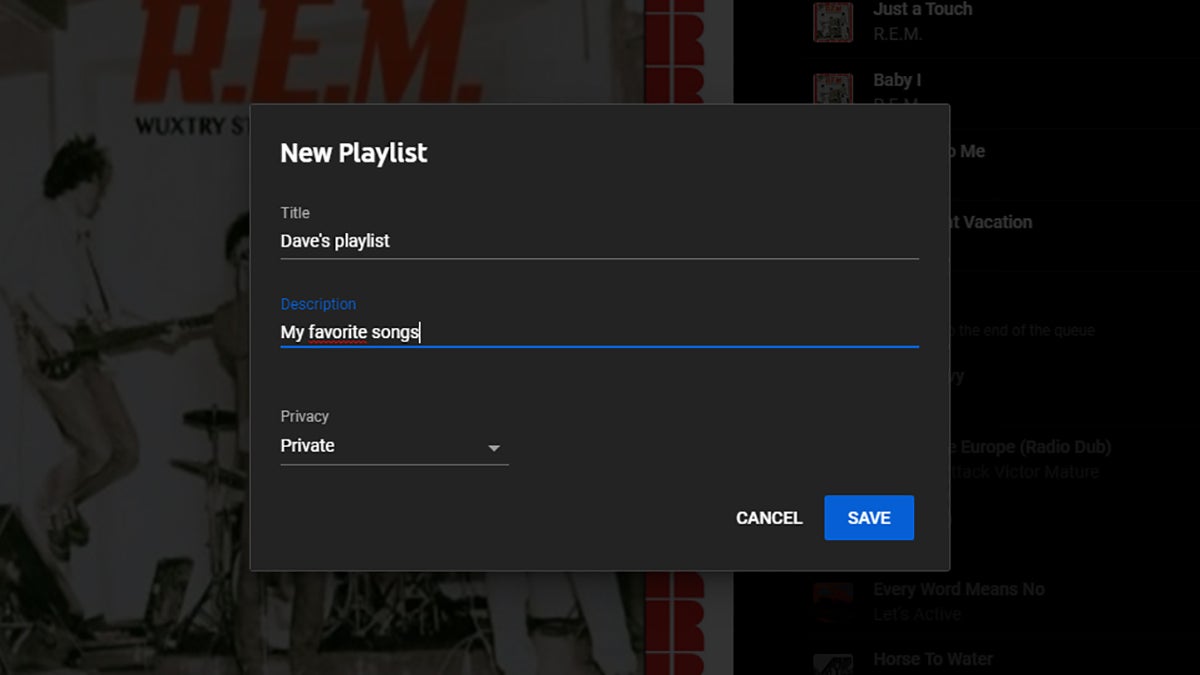 The free version of YouTube Music gives you plenty of control over your playlists. (Screenshot: Gizmodo)

It’s possible to skip around inside these playlists, jumping forward and backward, and picking out other songs in the queue. You’ll hear the occasional ad, just as you would on regular YouTube, but they’re relatively infrequent (when we tested it, at least), and some of them can be skipped.

Searching for specific artists and songs works fine, too – if you want to listen to a particular track at a particular time, you can. You can queue up full albums and play them in order as well. And you can create custom playlists with your picks of songs, though again, the occasional ad is going to interrupt your listening.

This all applies to the web client and mobile apps. But when it comes to the apps for Android and iOS, you can’t sync your songs for offline playback. You can’t listen in the background either, so when you close the app, the music stops. 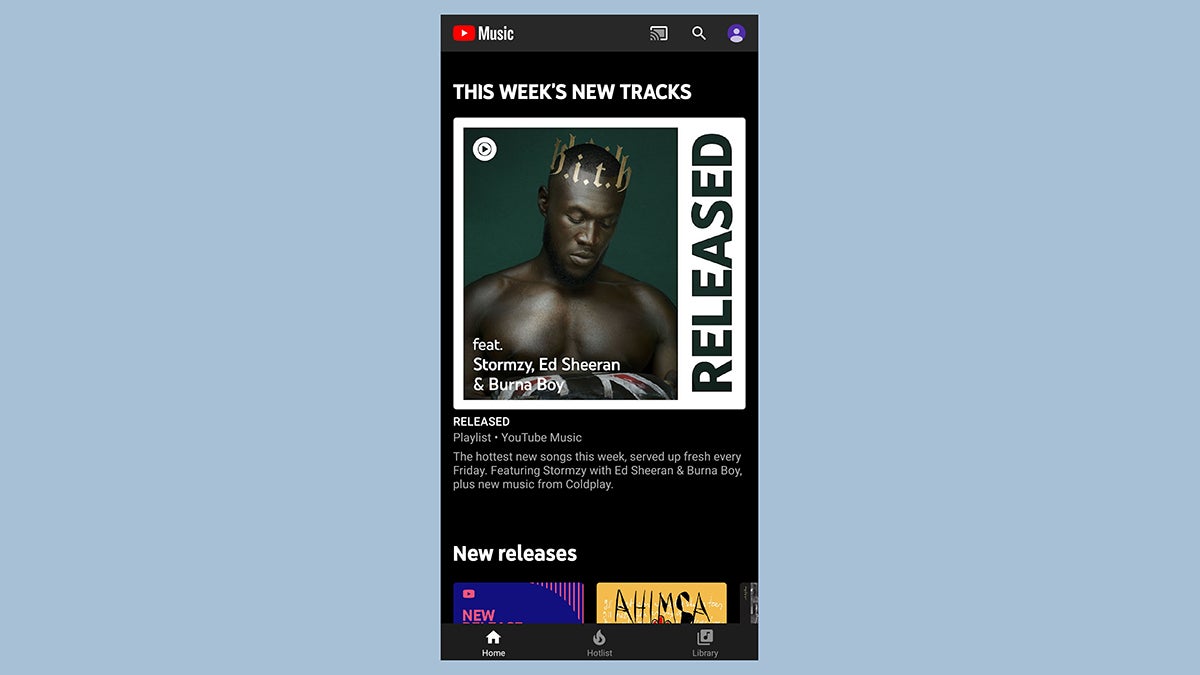 All your custom playlists are available on mobile. (Screenshot: Gizmodo)

YouTube Music has a strong free offering, giving you more music and flexibility than you might expect from a streaming service that you’re not paying for – but then, it’s building on top of YouTube, which lets you listen to an unlimited amount of music for free, with regular sponsored interruptions.

If YouTube Music is going to tempt people out of the standard YouTube app, it has to offer the same sort of features for free, which ends up making it one of the best music streaming options for people who aren’t paying. Depending on what you need from your mobile apps, the free tier even edges out Spotify in some areas.