The DJI Mavic Mini Blew Me Away

The tiniest drones are the worst ones, I always thought. It was nearly 10 years ago that I tried to fly my first quadcopter: the Estes Proto X (no relation). The thing was so light and unstable that, as soon as it was airborne, it caught a gust of wind and flew directly into my eye. So when I got the new Mavic Mini, let’s say I was wary. It looked too small to do the impressive things that big drones do. Then I flew the thing for two weeks, and it blew me away.

When all folded up, the DJI Mavic Mini is roughly the size of a soda can. That means it’s still larger than toy drones like the Estes Proto X or DJI’s own Tello but teeny next to the Mavic Pro. That’s saying something, too, because the folding Mavic Pro was considered to be super small when it was released in 2016. The Mavic Mini is also meaningfully smaller than the pocketable Mavic Air, released last year. When unfolded, the Mini is still only as big as a dinner plate.

What is it?: A tiny, light, foldable drone

As much as I have to say about the size of this tiny new drone, what’s more important is the Mavic Mini’s weight: 249 grams. That’s 23 grams more than an iPhone 11 Pro and just one gram shy of the weight that will, as of 30 November this year, require you to register the drone with the Civil Aviation Authority. DJI makes no effort to conceal its excitement about its new drone coming in underweight. After all, “249g” is literally painted on the side of the Mavic Mini, though only other drone nerds will know what that number means. It is nevertheless meaningful since any inexperienced pilot can start flying the Mavic Mini without fear of regulatory oversight.

To some aviation enthusiasts, that might seem like a tricky goal. DJI went to great lengths to make the Mavic Mini easy to fly, including the launch of a simplified new app called DJI Fly. The app is how you connect the remote to the drone and control the camera during flight. It’s also a stripped-down version of the DJI Go app that the rest of the Mavic series uses, as it offers fewer controls over camera settings. (You can basically only adjust exposure.) The new app also includes a number of tutorials that teach you the basics of flying. There’s even a flight simulator so you can get the hang of drone piloting without risking a crash.

Crashes seem inevitable. I can’t speak to the risk personally, as I never crashed the Mavic Mini in my two weeks of testing. However, I’m an experienced pilot, and it’s clear to me that the Mavic Mini is far from crash-proof. There are no obstacle avoidance features, for one. While the Mavic Mini does look like a shrunken down version of the Mavic Pro, almost all of the sensors that make obstacle avoidance possible are missing. (There are still a pair of sensors on the underside of the aircraft that help the drone land safely.) For an extra £20, DJI will sell you the Mavic Mini 360º Propellor Guard, which forms a protective dome over the rotors in case of a collision, though these bulky things sort of negate the drone’s otherwise ultra-compact nature. The company also claims that the Mavic Mini lightweight nature means it wouldn’t cause much damage if it fell out of the air. Still, novice pilots are probably screwed if they fly their new Minis into a tree.

It would be disingenuous if I didn’t point out that the Mavic Mini is nevertheless a breeze to fly. The DJI Fly app lets you connect the controller and the drone with one tap. A second tap takes off, and then you’re left with only a handful of things you can do in the air. You can record video or take a photo. You can utilise a number of automated Quick Shot modes including Dronie (up and away) and Helix (up and swirling around an object of interest). As previously mentioned, you can adjust the exposure of the camera. But that’s it. There’s no getting lost in nests of menus and settings, options that are essential for some professional drone pilots but surely confusing to newbies. Although I did miss some of the more sophisticated camera features from the Mavic Pro, I also loved how quick and easy it was to get the Mavic Mini from my pocket and into the air, shooting some sweet drone videos. 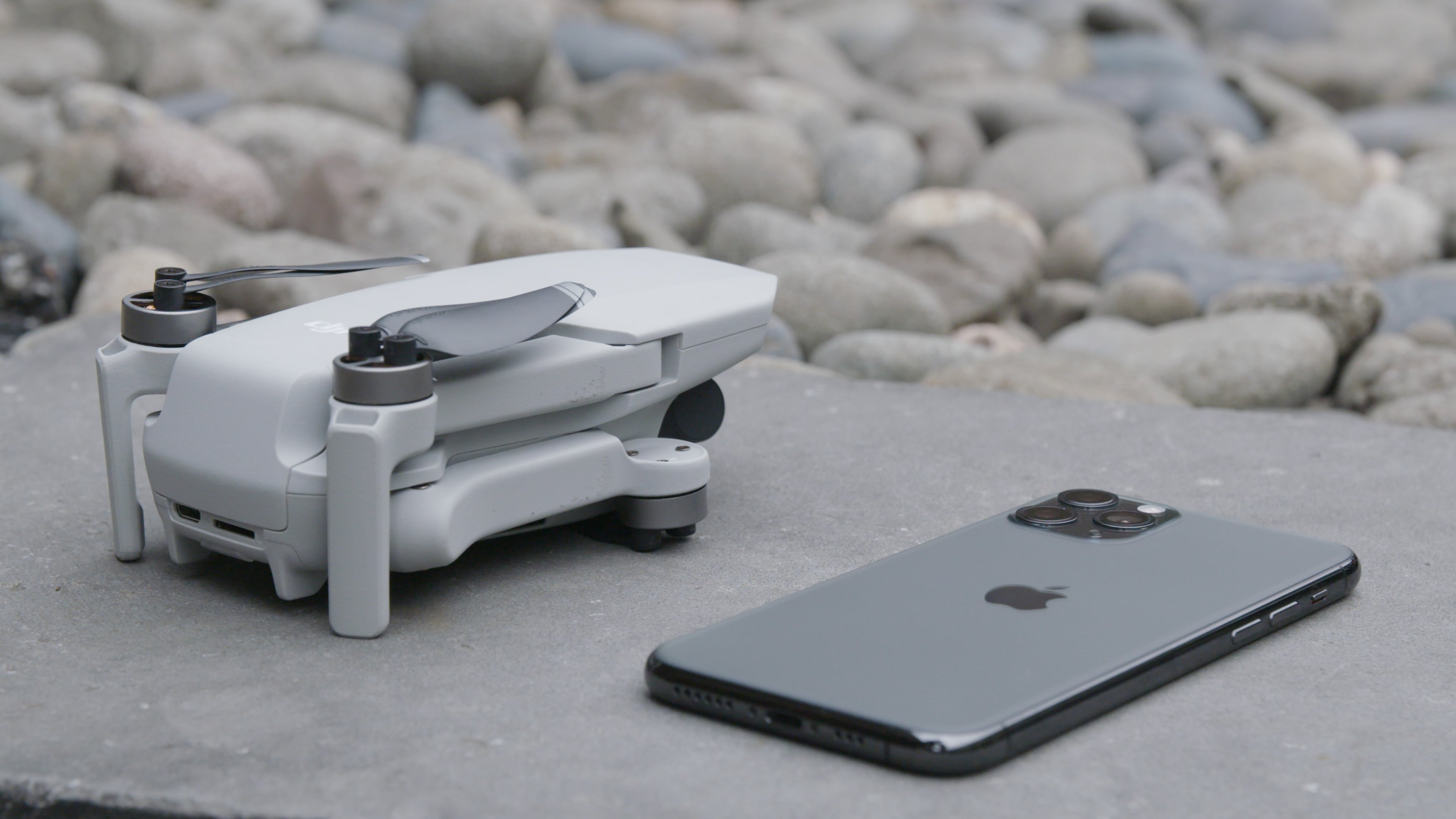 The Mavic Mini is only slightly heavier than an iPhone 11 Pro. (Photo: Raul Marrero/Gizmodo)

All of this portability and simplicity comes at a cost, of course. The Mavic Mini is super light, which means you can carry it around in your backpack all day and not even realise it’s there. That also means that the drone struggles in a steady breeze. The drone does have a feature called GPS Precise Hover that’s meant to keep it from drifting. That worked fine on calm days. On one of my outings, however, winds were topping out at 10 miles per hour (a “gentle breeze” on the Beaufort scale), and the Mavic Mini struggled to stay steady when hovering more than a few feet above the ground. The app also issued repeated warnings about strong wind conditions, though the weather certainly seemed reasonable from where I was standing. We also flew a Mavic Pro in these conditions, and it didn’t drift or freak out at all.

Even with a little bit of wind in the mix, the Mavic Mini shot impressively steady footage. In fact, the footage from the Mini’s camera is just impressive all around, given how small and affordable the setup is. It records video at 2.7K resolution at 30 frames-per-second and full HD at 60 frames-per-second. Few people would notice the difference between 2.7K and 4K resolution – especially when watching the playback on a smaller screen. The Mavic Mini footage we shot also scaled up pretty well, but a trained eye could spot how details seemed to soften up the larger the image got. This might be because the Mavic Mini has a maximum bitrate of 40Mbps which means the image contains far less information than footage from, for instance, the Mavic Pro which has a max bitrate of 100Mbps. Still, the Mavic Mini does a great job with colour accuracy and handles low light shots very well.

While size is supposed to be the drone’s killer feature, I think value is more important. At £370, the Mavic Mini is less than half the price of the Mavic Air, the excellent little folding drone that DJI released last year. It’s less than a quarter the price of a Mavic 2. The only drone that could compete with the Mavic Mini in terms of convenience and value would be the DJI Spark, but it’s no longer for sale.

Those comparisons almost aren’t fair. The more expensive DJI drones are better, but what makes them better are features that plenty of people don’t want or need. The Mavic Mini blew me away because it’s just enough. It’s enough of a drone to help you learn how to fly and to capture incredible aerial footage. At the same time, the Mavic Mini is a gateway drone, something that’s going to get you more interested in these amazing 21st-century gadgets. It’s much more than a toy.