Satellite observations of Jezero crater on Mars, the chosen landing site for NASA’s next rover mission, have revealed evidence of minerals that are exceptionally good at preserving traces of ancient life, making this an even better place to send the rover than initially thought.

If primitive life existed on Mars billions of years ago – and that’s still a big if – there’s an excellent chance the fossilised remains of this life could be found in Jezero crater, according to two recent studies. This is great news, given that NASA’s yet-to-be-named 2020 rover will be launched to this exact spot next year.

That Jezero crater is an excellent target for the rover is hardly a surprise, as it was carefully chosen by NASA owing to its potentially life-friendly properties, or at least its former potentially life-friendly properties. Billions of years ago, this 49-kilometre-wide (30-mile) crater was brimming with water from a large nearby watershed and its associated rivers. When Mars was warmer than it is today, the lake inside Jezero crater may have been habitable, hosting basic microbial life similar to bacteria. Accordingly, NASA wants the 2020 rover to explore clay minerals in the crater and examine its sediment layers, but the latest research points to some other tantalising targets. 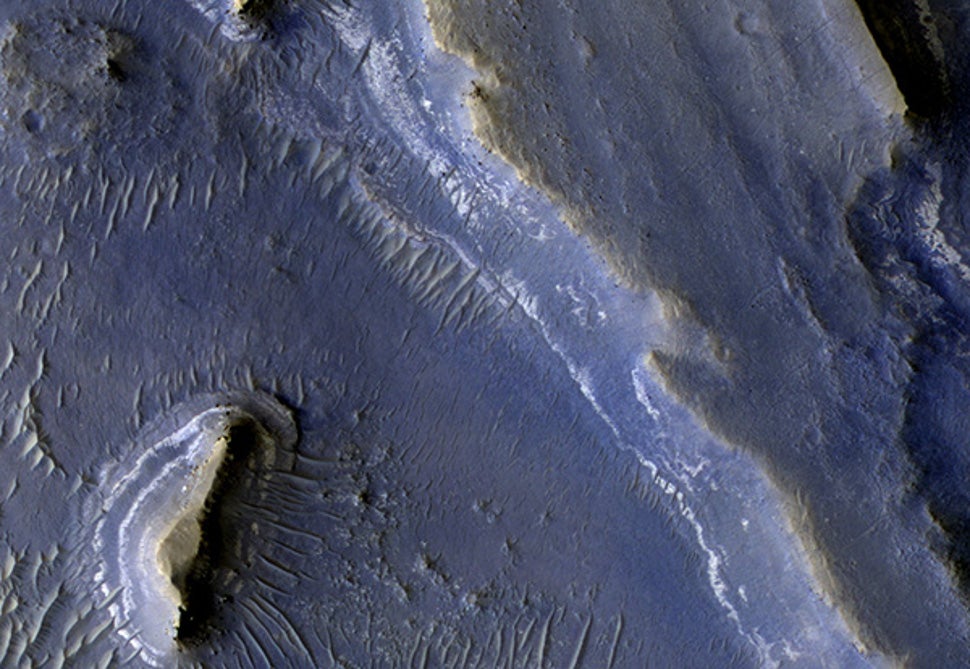 A false-colour view of Jezero crater showing the edge of an ancient river delta, where scientists have detected hydrated silica. (Image: NASA)

In a paper published in Geophysical Letters, a research team led by Brown University PhD student Jesse Tarnas describes the discovery of hydrated silica in rocky outcrops located along the edge of an ancient river delta. This is big news because hydrated silica, a form of silicon dioxide, is known to preserve fossilised evidence of ancient life on Earth.

And in a separate paper published in Icarus, a research team led by Briony Horgan from Purdue University describes the presence of carbonates inside Jezero crater, a mineral that’s also very good at preserving traces of ancient life and other important biosignatures.

Both of these discoveries were made possible by the Compact Reconnaissance Imaging Spectrometer for Mars (CRISM), located on NASA’s Mars Reconnaissance Orbiter (MRO). Because hydrated silica yields weak spectral signals, Tarnas and his colleagues applied two big data processing methods to confirm the signatures. To sniff out the carbonates, Horgan and her team used the CRISM data in conjunction with high-resolution imagery and topographic models of the Martian surface. 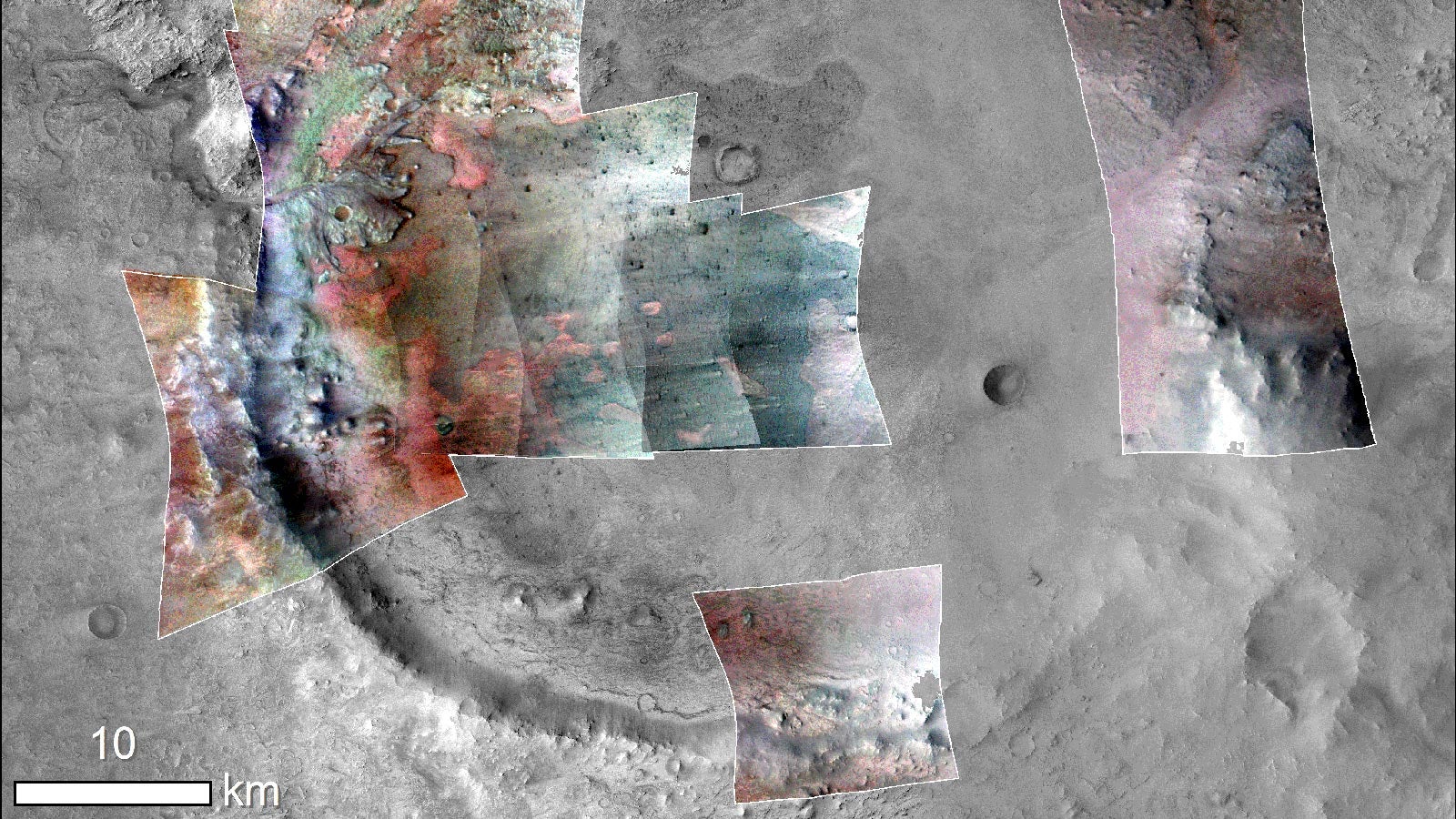 “We started the project by applying a new data analysis method that we developed for hyperspectral images, which we used to get compositional information of the surface of Mars from orbit, to images of Jezero crater and the surrounding region,” Tarnas wrote to Gizmodo in an email. “When we started, Jezero crater had not yet been selected as the landing site for NASA’s Mars 2020 rover, so we were interested in finding new minerals or mineral assemblages both within and outside of Jezero, since another final candidate landing site – NE Syrtis – was really close by.”

When the ancient rivers flowed into the crater, they transported minerals from the watershed, producing a fan-delta deposit that’s now rich in clay materials. As described in the Geophysical Letters paper, a hydrated silica deposit is located on the edge of this delta at a low elevation. This suggests the minerals formed at the bottom of the delta, known as the bottomset layer, making it a prime spot for the 2020 rover to investigate.

“These minerals and mineral assemblages tell us about the conditions under which water and rock have interacted in this region of Mars,” said Tarnas. “Most of this water-rock interaction took place billions of years ago. Some of these water-rock chemical reactions produce habitable environments, including the probable habitable environment of Jezero crater’s ancient lake, which formed via physical movement of water over rock.”

Strong signatures of carbonates were detected along the western inner rim of Jezero crater, which Horgan described as a “bathtub ring” in a NASA press release. Carbonates typically form in shallow and warm seas, often in conjunction with biological activity, hence the interest in carbonates on Mars. On Earth, carbonates contribute to the fossilisation of structures like seashells, corals, and, importantly, stromatolites – rocky structures formed by big clumps of microbial life. Admittedly, traces of seashells and coral on Mars are highly unlikely, but evidence of bacteria-like microorganisms is a different story.

In terms of what this preserved Martian life might look like, Tarnas said it would “probably look like microbial cells permineralised in the hydrated silica, which means silica grew in the spaces separating cell walls, and the rock containing the microfossils would likely be rich in complex organics.” He said it might look similar to ancient microfossils found in the silica of ancient rocks, including 3.4-billion-year-old fossils found in South Africa and Australia.

Excitingly, both the hydrated silica and carbonates should be easily accessible by the 2020 rover on the Martian surface. The rover will have a built-in chemical lab to test samples and an instrument capable of detecting complex organic compounds. The rover will also be able to take close-up images of the deposits to see how they’re positioned compared to other rocks. It also has sensors similar to CRISM, which will allow for a comparative analysis with MRO data. Failing all this, the rover can extract samples and leave them as a cache for future missions to retrieve and bring back to Earth for analysis.

This is all very exciting, especially in light of the news earlier this week about intriguing oxygen fluctuations being detected on Mars. The Red Planet may or may not have once hosted life, but we’re certainly doing our best to find out. The good news is that we won’t have to wait long for the new rover to start exploring Jezero crater – February 2021 will surely arrive in the blink of an eye.