To 15 Years of World of Warcraft, and All the Pups I've Loved Before

Last weekend, on 23 November, the Warcraft franchise marked some significant birthdays. Not only is it 25 years since Blizzard’s fantasy series first kicked off with the release of Orcs and Humans, it’s also 15 years since Azeroth became open to all in World of Warcraft, changing video games forever. For me, it’s also been about...dogs?

Fantastical canines have a weirdly definitive role in the time I’ve spent on Azeroth’s shores. Although I dabbled with World of Warcraft as a teenager on and off throughout the original game and its first two expansion packs (The Burning Crusade and Wrath of the Lich King), I only truly dove in with the third expansion, 2010's Cataclysm. And I did so because you could play as the Worgen, the race of Incredibly British Werewolves added to the Alliance’s ranks.

Although I’ve dabbled in many characters over the years, my first max-level WoW character was a Worgen Hunter, a ranged class that mixed distance damage dealing with managing a pet to fight alongside you. Right now, in the game’s seventh expansion (an eighth is on the way next year!), Battle for Azeroth, my primary character is another Worgen, this time a Warrior, charging into combat to hit things with Big Swords. 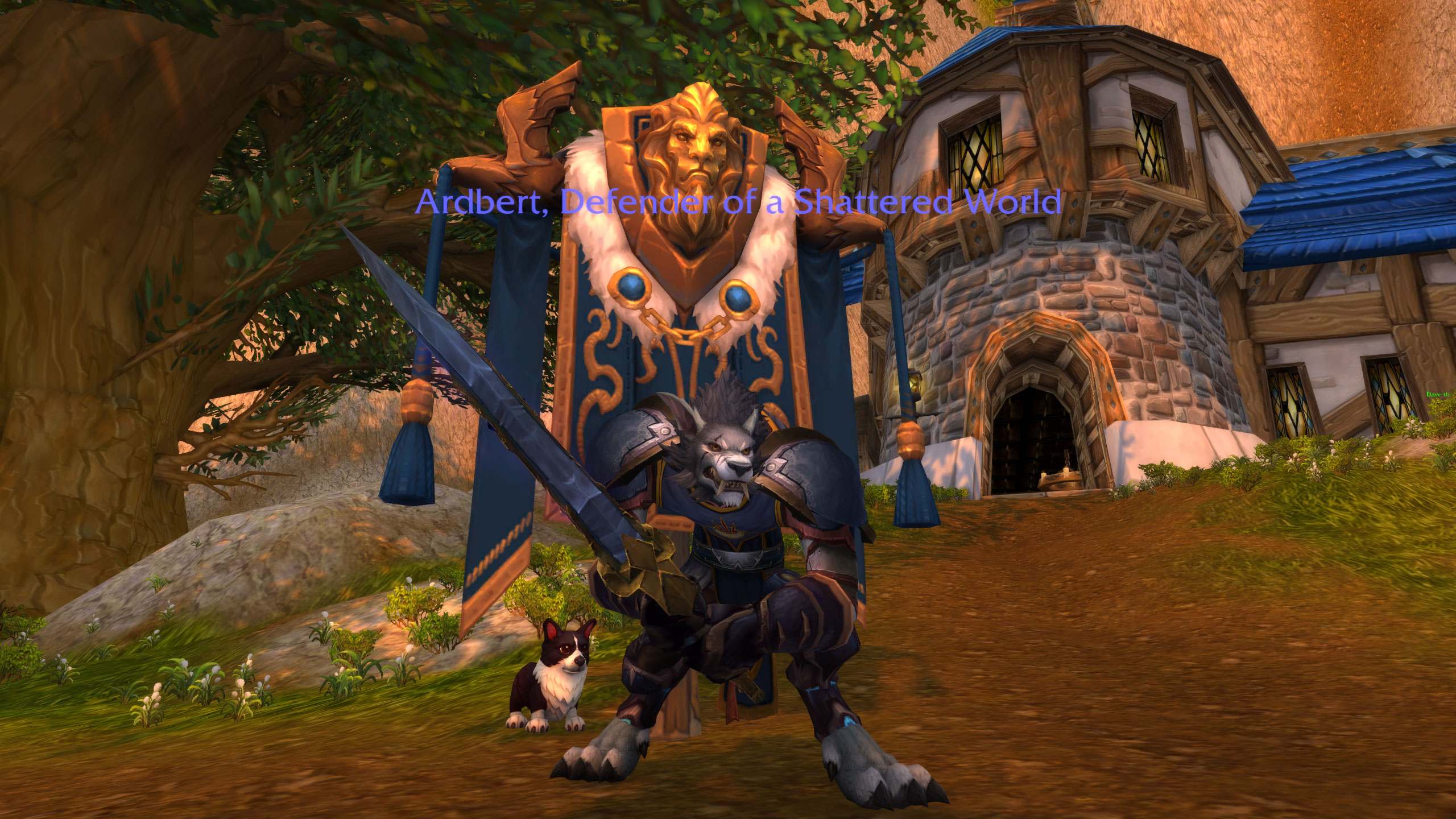 I named him after a character from another of my MMORPG loves, Final Fantasy XIV. (Image: Blizzard Entertainment)

Warcraft has also been the game I’ve turned to in more personally troubled times, a world to easily spend some time in when the real one hit some hard lows. It helped the most when my first dog, a Westie named Millie, passed away in 2015. I logged in with that same Worgen Hunter I’d played since 2010, whose steadfast companion in battle was a Mastiff, the starting pet all Worgen Hunters begin the game with. I’d named her after Millie – and it got to feel like for a little bit, she was still there, helping me fight nasty orc warlocks or invading demonic legions.

I had, in those on and off years, also started amassing many cute little doggy companion pets, one of the many collectible aspects WoW has added as side content away from all the actual, well, warcraft. Over the years the companion system has grown from getting a cute little critter (or Diablo from Blizzard’s demonic action-RPG series, if you were a lucky owner of the very first WoW collectors edition!) to follow you around while questing to pretty much its own entire subsection of the game. There are entire websites dedicated to logging all the pets you can find as rewards and special loot drops in the game. Blizzard has raised hundreds of thousands of dollars for charity over the years, selling special pets for good causes (and also just selling them to line their own pockets). Hell, these days you can even battle other players with your collected cuties in a faux-Pokémon style minigame. 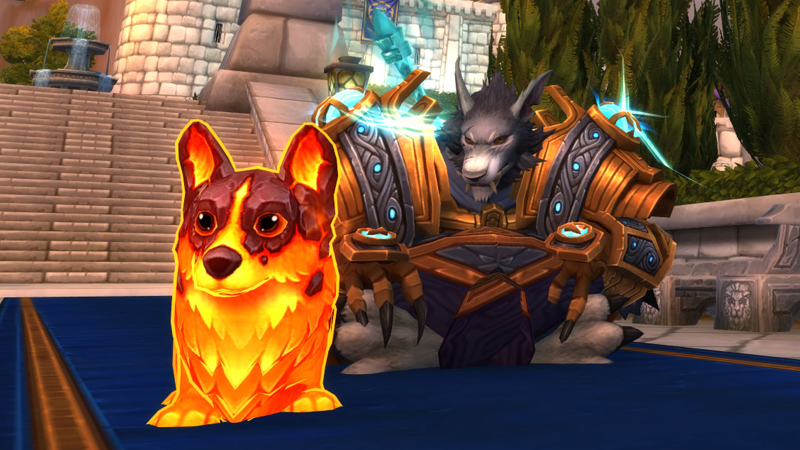 Which brings me to WoW’s 15th anniversary. For the past few years, Blizzard has celebrated the game’s birthday with special events – usually, it’s just a bump to the amount of experience and reputation your characters could earn. But on big anniversary years, there would be more elaborate events. In 2014 for the 10th anniversary, you could play a special version of one of the game’s very first 40-player raids, Molten Core...and completing it would earn you a fiery Corgi pet. And I needed it.

I am by no means a hardcore WoW raider, but I queued up, I wiped a bunch of times, but by god, I persevered and got my Molten Corgi, sparking my very own personal WoW quest: I would own every Corgi Blizzard put in the game.

For a while, it was a small quest: the Molten Corgi was the only Corgi pet, and while adorable, he was also made of lava and not really a normal Corgi. The sixth expansion, Legion, added a second, a black-and-white Corgi named Corgnelius. But Corgnelius was super rare – you had to unlock a special mission to find him, and even earning the mission was a random chance thing. I diligently checked my mission boards day after day, until one day it dropped, and Corgnelius scooched into battle by my side. 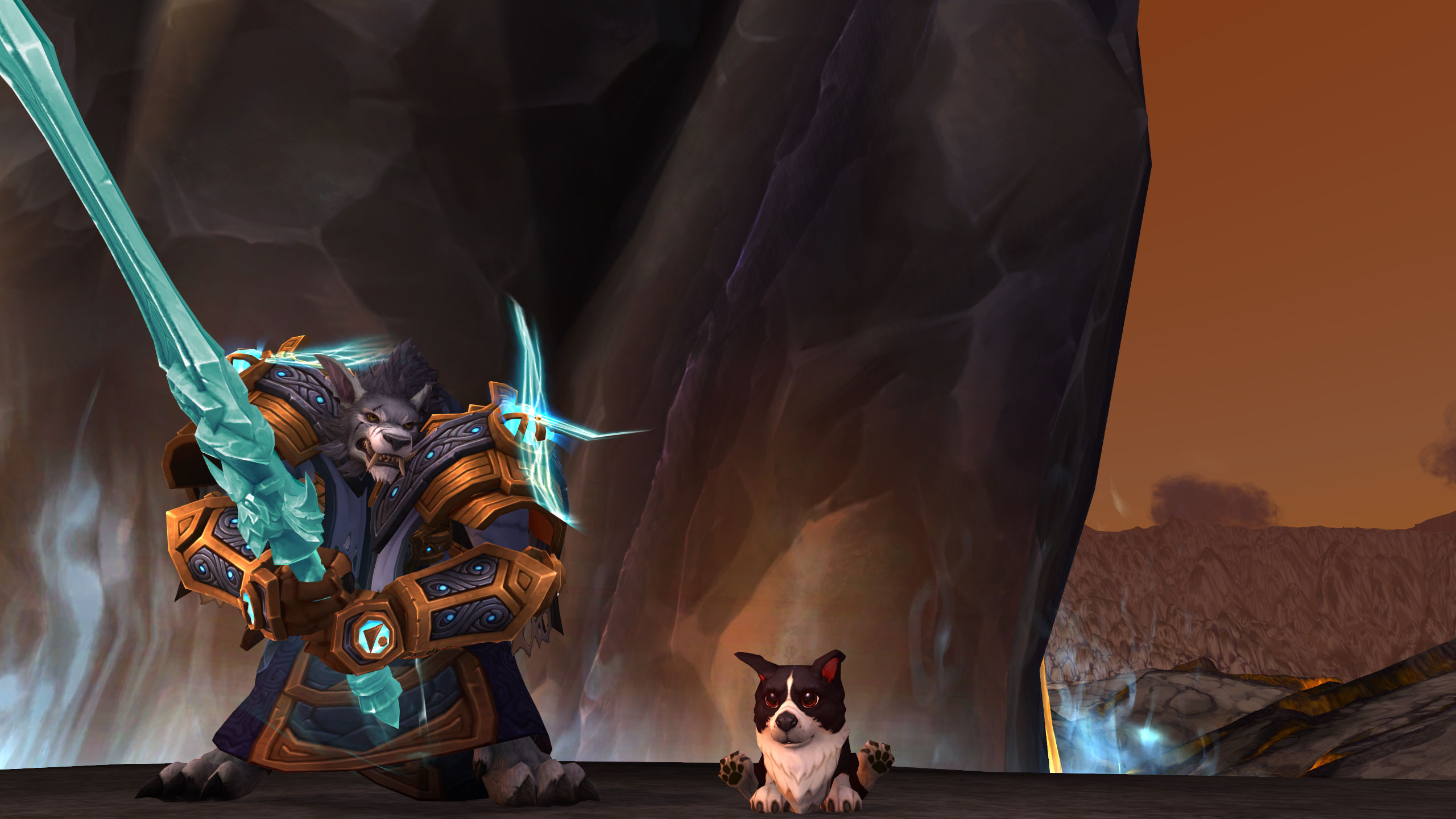 Look at him scooch his li'l butt. (Image: Blizzard Entertainment)

The past few anniversary celebrations for Warcraft added a third – this time a normal Corgi pup in traditional brown-and-white coloration, one you could simply buy with in-game tokens earned from doing anniversary quests. But busy work schedules or time spent in other games kept me unsubscribed from Warcraft during the anniversaries each year, meaning that time and time again I missed out on my white (and brown) whale (corgi).

That is, until this year.

I’ve been away from the game for a bit since Battle for Azeroth’s launch, but recently started playing again because of the news around that aforementioned next expansion, Shadowlands. But I also realised it meant I could finally get my damned Corgi. I raced to level my new character to the max, so he could participate in the event. The minute it kicked off, I flew on over to the vendors set up to celebrate the anniversary in Azeroth’s Caverns of Time, home to the Bronze Dragonflight – Warcraft’s longtime draconic guardians of the timestream, and perfect hosts for an event about looking back on the past.

While my fellow players were excited to raid new versions of classic Warcraft boss fights like the Lich King, Kael’thas, and Deathwing added for this year’s 15th anniversary, I had one singular focus. I landed my flying mount. I walked up to the vendor. I paid my tokens, the palm of my mouse-hand weirdly sweaty.

WAITED THREE YEARS FOR THIS MOMENT THOUGH pic.twitter.com/UTdxF5DoJL

And there it was. My little Corgi. My quest, for now, complete. It was weirdly more satisfying than many of the very heroic things my characters have done in years of World of Warcraft, which has included saving the world many times over and even going to literal other worlds and saving them, too.

But it also got me thinking about time, weirdly enough. Fifteen years of anything is a long time, let alone a video game – a fantastical world that has grown and changed so radically, and been a place to visit for almost half my life. That’s usually only something I can say about book or comic series, or long-running TV and movie franchises. Not really a single video game, pieces of media that have been there and grown as I have. It’s what’s made Warcraft so enchanting and special to me over the years, because it’s felt like its own living, breathing thing. 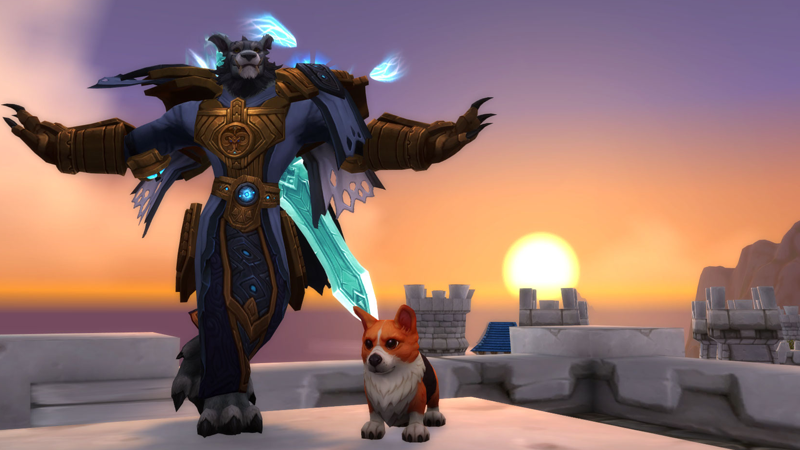 Just another day in the World of Corgcraft. (Image: Blizzard Entertainment)

So happy birthday, World of Warcraft. Thanks for the memories. And all the cute dogs, be they companions, pets, or champions in their own rights.