Tonight's Walking Dead Was a Mess

Earlier this year, the penultimate episode of The Walking Dead’s ninth season brought us one of the most shocking, heartbreaking moments in the history of the series. Tonight’s troubled lead-up to the mid-season finale had its own tragic surprise, but the real bummer is it’s one of the show’s worst episodes in quite some time.

Although “Open Your Eyes” isn’t good, it’s not completely bad. A lot of it is just fine, and there’s still some deft storytelling and some excellent character moments scattered throughout it. Like the entirety of this half-season, Siddiq (Avi Nash) is still wracked with guilt over surviving the Whisperers’ massacre, but now he’s specifically mourning the murder of his former medical trainee Enid. Remember how the Whisperers held his eyes open and forced him to watch as Alpha executed her? It gives his PTSD scenes a focus they’ve lacked, which is good because he has quite a lot of them in this episode.

Even better, Siddiq’s ongoing nervous breakdown is woven into the narrative so they aren’t just the same reminder he witnessed some horrific events last season. When Carol and Daryl bring in the Whisperer they caught, a very upset Gabriel – justifiably unhappy that they made such a major decision without the town council’s approval and potentially pissed Alpha yet again and – demands that the prisoner’s wounds get treated, even though Carol very much wants to torture him. Siddiq tries to help the Whisperer but immediately gets flashbacks, so Dr Dante (Juan Javier Cardenas) handles it instead. 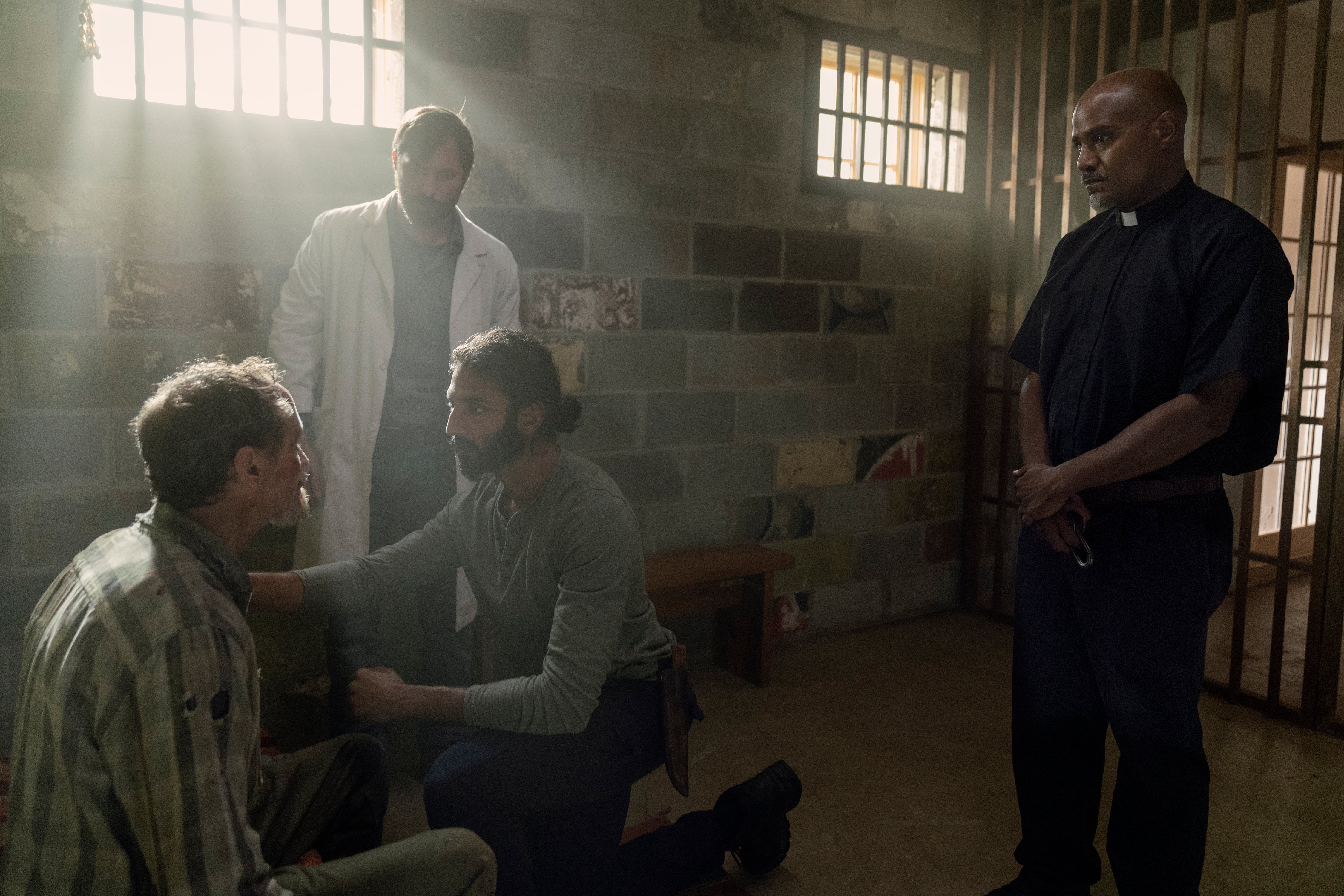 Carol asks Lydia the best way to get answers from someone who is essentially one of Alpha’s cultists, Lydia replies to show him what Alexandria is, what it can provide, that this way of life can survive – because if that idea can get back to the rest of the cult, it’ll spread. So Carol offers the prisoner toast and jam, which he quickly spits back in her face. The torture begins almost immediately but quickly ends when Carol discovers the Whisperers think Alpha killed her daughter and realises if they learn Lydia’s alive and that Alpha lied and ignored her own law, the cult will likely fall apart.

Unfortunately, the prisoner mysteriously starts coughing up blood and dies just before Lydia is brought in. When Siddiq examines the body, he finds that Dante gave the prisoner poisonous hemlock pills instead of some kind of more helpful, less fatal medicine. It’s pretty suspicious, but Dante has a solid excuse: He assumed the pills were something else because Siddiq packed the medicine bag they’d brought to treat the dude originally – and Dante couldn’t imagine that Siddiq would have brought poison in the first place.

Given that Siddiq has barely slept all season, and that his flashbacks keep getting worse and more detailed, it’s an extremely reasonable explanation…but it’s hard to completely bring that Dante-shaped warning flag down once it’s been raised. So it’s not the biggest shock when, at the end of the episode, Siddiq – who, happily, had finally figured out that the town’s water has been making everyone sick – has one more giant flashback to the massacre and realises that Dr Dante was the Whisperer who had held his eyes open and the two fight. Learning that Dante was Alpha’s inside man isn’t particularly shocking, given that he’s been intermittently creepy since his first appearance, and moreover that he’s the only new character in Alexandria. What shocked me is that he kills Siddiq. Not because I didn’t expect Dante to try, but because after Carl’s death and Rick’s abduction and last season’s massacre and Michonne’s impending departure, Siddiq has by default become one of the show’s biggest characters, despite having only arrived in season eight. I understand that’s the reason Siddiq was chosen, but man, I seriously don’t know how many more major characters the show can lose at this point.

To its credit, The Walking Dead does very cleverly arrange things so Siddiq’s murder is as tragic as possible, first by making sure he had a repetitive PSTD scene in almost every episode, making sure the character stayed in viewers’ minds for the entire season (a lesser version of how season nine spent so much time focused on Henry, also to maximise the impact of his death). The show also makes sure to remind us that Siddiq and Rosita had a kid, and even has Rosita save Siddiq’s life, rescuing him from drowning after he’d thrown himself into the town’s little reservoir after a particularly bad flashback.

Afterwards Rosita gives him a reasonably moving talk about how Siddiq will pull through this because he’s not alone, echoed later by a significantly more moving speech from Dante about how Siddiq shouldn’t blame himself for not figuring out the water was tainted earlier, that they’re in this together, and that Siddiq is Dante’s friend. Siddiq realises Dante is a Whisperer immediately after this, which should render Dante’s speech bullshit. Instead, Dante cries “I didn’t want this! Not you!” as he chokes the life out of someone he genuinely considers a friend.

The scene has a real emotional impact…but things start to fall apart once the credits roll. Dante first appeared in the season 10 premiere, meaning he arrived after the massacre and after the Whisperers had already secretly walked among the colonists. Why wasn’t everyone completely suspicious of him from the get-go? How the hell has he been getting info back to Alpha without anyone noticing anything? And if Alpha has had an inside man this entire time, why the hell does she need Gamma to find out how many people live in Alexandria from Aaron? Speaking of which, Aaron has continued meeting with Gamma, although thankfully he knows she’s there to get information out of him. (This still doesn’t explain Aaron’s total U-turn from crazed Whisperer hater to someone willing to have a friendly chat with them over this half-season.) Aaron is following Lydia’s advice from the beginning of the episode, not that he was there to hear it. He talks to Gamma about Alexandria, how good it is there, how there are kids who are safe (well, as safe as anyone is in The Walking Dead), including one of his own. When Gamma inadvertently reveals she had a sister, Aaron tries to bond with her, telling her that he lost a brother, too. Gamma gets very upset – mainly because she intentionally fed her sister to zombies – runs off, and gets whipped by Alpha to get her cult juice refilled.

Later, she meets Aaron again, demanding answers that he still has absolutely no reason to give her, when Carol very coincidentally rides up with Lydia in tow. Carol is determined to show somebody in the Whisperers that Lydia is alive to sow the seeds of dissension, and she couldn’t have found a better candidate to reveal Alpha broke her own rules and let her daughter live than someone who followed that same rule and murdered her own sister. Gamma runs off an has a very understandable cry, while Lydia – who becomes extremely upset when she realises Carol was using her just like her mother used her – runs off as well to go solo. (This always seems like a dumb move in TWD, but Lydia’s decision makes more sense when you remember most of Alexandria hates her, so there’s honestly not much reason to go back.) 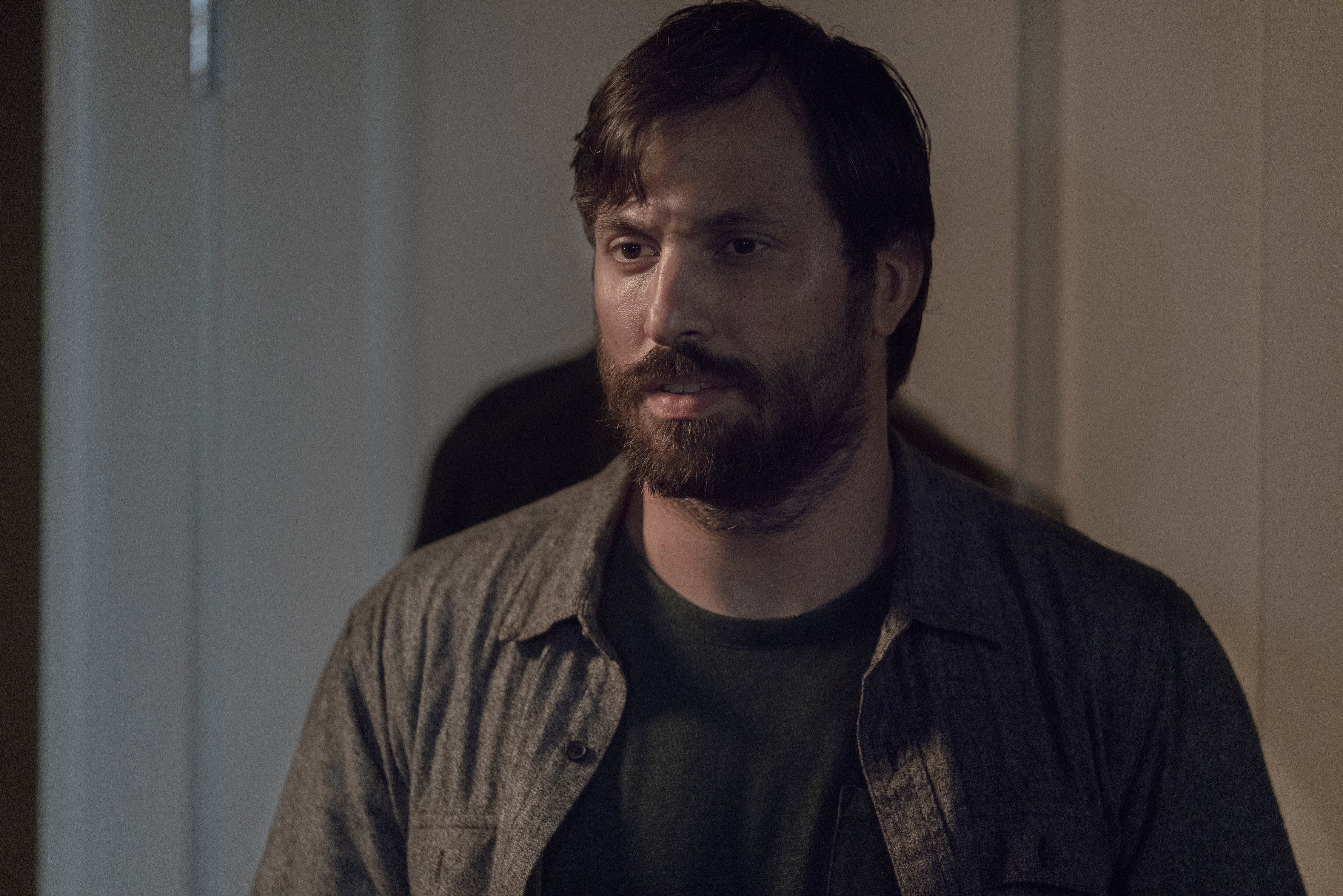 Although the scene’s Carol ex Machina isn’t great, the real problem leads back to Dante. Lydia is exactly right when she said Alexandria’s very existence would make many Whisperers realise they can have a life that doesn’t involve wearing masks made of dead people. Alpha specifically said she wants to destroy the colony so her people aren’t tempted by it, and this is exactly what happened to Lydia. So why is Dante, who’s not so cultish that he can pass for an incredibly normal if slightly sleazy dude for months, and who has been living that sweet Alexandrian life for those same months, still on Team Whisperer? And for that matter, how the hell did Lydia never recognise Dante?

It’s just…it’s just a mess, and it does cheapen Siddiq’s death some, despite the episode’s—and the season’s—otherwise solid attempts to make it matter. But there’s something still genuinely heart-warming that this is only the second bad episode of the show’s New Era, and even then, these problems aren’t nearly as egregious as the show’s issues used to be. It’s only because The Walking Dead has been so consistently good that the nonsense in this episode feels so disappointing. I mean, if “Open Your Eyes” had aired somewhere in season eight, it honestly would have been one of the best episodes we’d had in years.