Rev, one of the biggest names in transcription – and one of the cheapest services of its kind – opted to alter its pay structure with little warning for thousands of contractors on its platform, some of whom are furious at what they expect will be smaller paycheques from here on out. 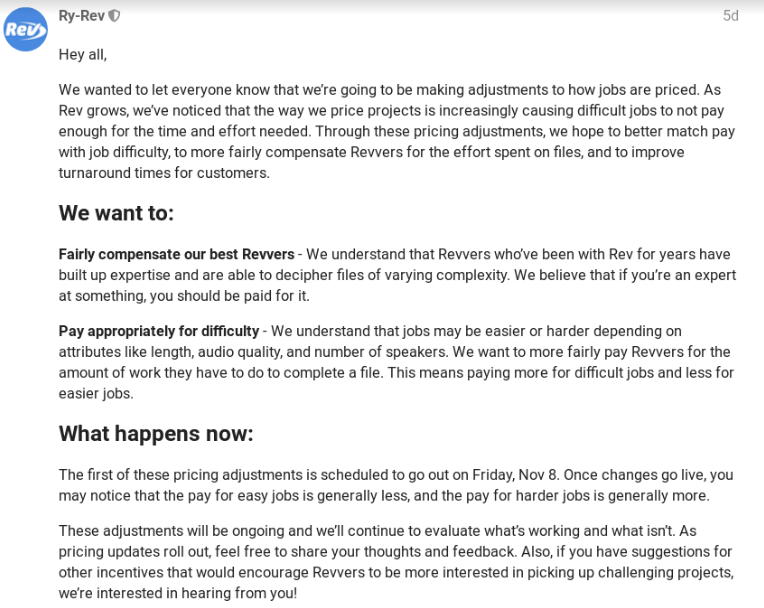 Launched in 2010, Rev, whose CEO Jason Chicola is pictured above, made a name for itself by charging customers who wanted transcriptions of interviews, videos, podcasts, or whatever else the bargain-basement price of $1 (78p) per minute of audio. That’s attracted some notable clients, including heavyweight podcast This American Life, according to the company. (Some teams at Gizmodo and its sister websites have also used Rev for transcriptions.) According to one whistleblower, a little less than half of that dollar went to the contractor, while about 50 to 55 cents (39p to 43p) on the dollar lined Rev’s pockets.

But in an effort to “more fairly compensate Revvers for the effort spent on files,” Rev announced on an internal message board on Wednesday that its job pricing model would change – with a new minimum of 30 cents per minute (cpm) going into effect last Friday.

“There was an internal forum post made two days prior, but not everybody checks the forums,” one Revver who wished to remain anonymous for fear of retaliation, told Gizmodo. “A lot of people found out when they logged on on Friday. People are still showing up in the forums asking what’s going on!”

A spokesperson from Rev provided the following response to a request for comment:

Rev freelancers have full control over what jobs they decide to work on. They can accept or reject any projects without consequences as well as set preferences indicating what jobs they choose to accept, with full control over all parameters including file types, audio length, and pay. We informed our community of these changes on our central online communications hub in advance of them going into effect on Friday, 11/8. We welcome feedback on these changes and will continue to make adjustments in order to ensure our freelancers receive fair pay.

In an update reviewed by Gizmodo, marked as being appended last Wednesday, Rev sought to downplay the impact of the pay algorithm change. “30 cpm will be a starting price for a very small number of jobs. On the other hand, some jobs will now start at 80 cpm,” the company wrote, according to screenshots of the Rev’s internal message board. “The goal is NOT to take pay away from Revvers but to pay more fairly for the level of effort/skill required.”

According to the Rev worker who spoke to Gizmodo, “People have seen cpm start higher on a few jobs, but for the most part, it feels like the floor has shifted downward, and rates have dropped with it.”

Regardless of what goal Rev had in mind, the effect among some transcribers is to see this as a way to short-change workers. They’re right to be sceptical: After all, the gig economy has been the genesis of some clever accounting – whether its platforms shifting their pay algorithms or subsidising wages with workers’ own tips – that rarely favours contractors.