She-Ra and the Princesses of Power’s latest story can be summed up in one word: tense. Season four throws our heroes and villains into the lion’s den, tearing friendships apart without offering easy solutions, and leaves us to figure out whether we’re okay with it. It may be hard to watch, but it’s worth it.

We pick up the She-Ra story shortly after the events of season three, when Queen Angella sacrificed herself to close the interdimensional portal. Glimmer (sporting an amazing new hairdo) is crowned the new queen and leader of the rebellion, and this changes things for the Best Friends Squad. She’s no longer able to go out on missions, leaving her feeling left out and useless. But more so, Glimmer is struggling to find her place. She can no longer be the rebellious teen lashing out against authority, she is the authority. And, much like how Glimmer used to rebel against her mother, so have Adora and Bow started rebelling against her. It causes a rift in their friendship that cuts deep.

Adora and Catra’s relationship may be the heart of She-Ra, but it’s Glimmer and Adora’s bond that’s at the heart of this season. It’s hard for the two to find common ground when they now find themselves in very different places than they were previously. The show doesn’t ask the audience to choose a side; but, of course, that’s something we as viewers try to do anyway. Only here, there’s no winner.

Glimmer feels that Adora isn’t respecting her decisions, which is true – but she also makes some poor judgements in her new role. Adora wants to protect Glimmer and keep her safe, which is noble – but you can tell she’s also fighting for control because, as She-Ra, she’s used to being the main decision-maker for the group. She has trouble relinquishing that authority to Glimmer, even if she doesn’t realise that’s what she’s doing. It doesn’t help that Adora is facing even more pressure from Light Hope to realise her “destiny,” something that plays a huge part in this season. 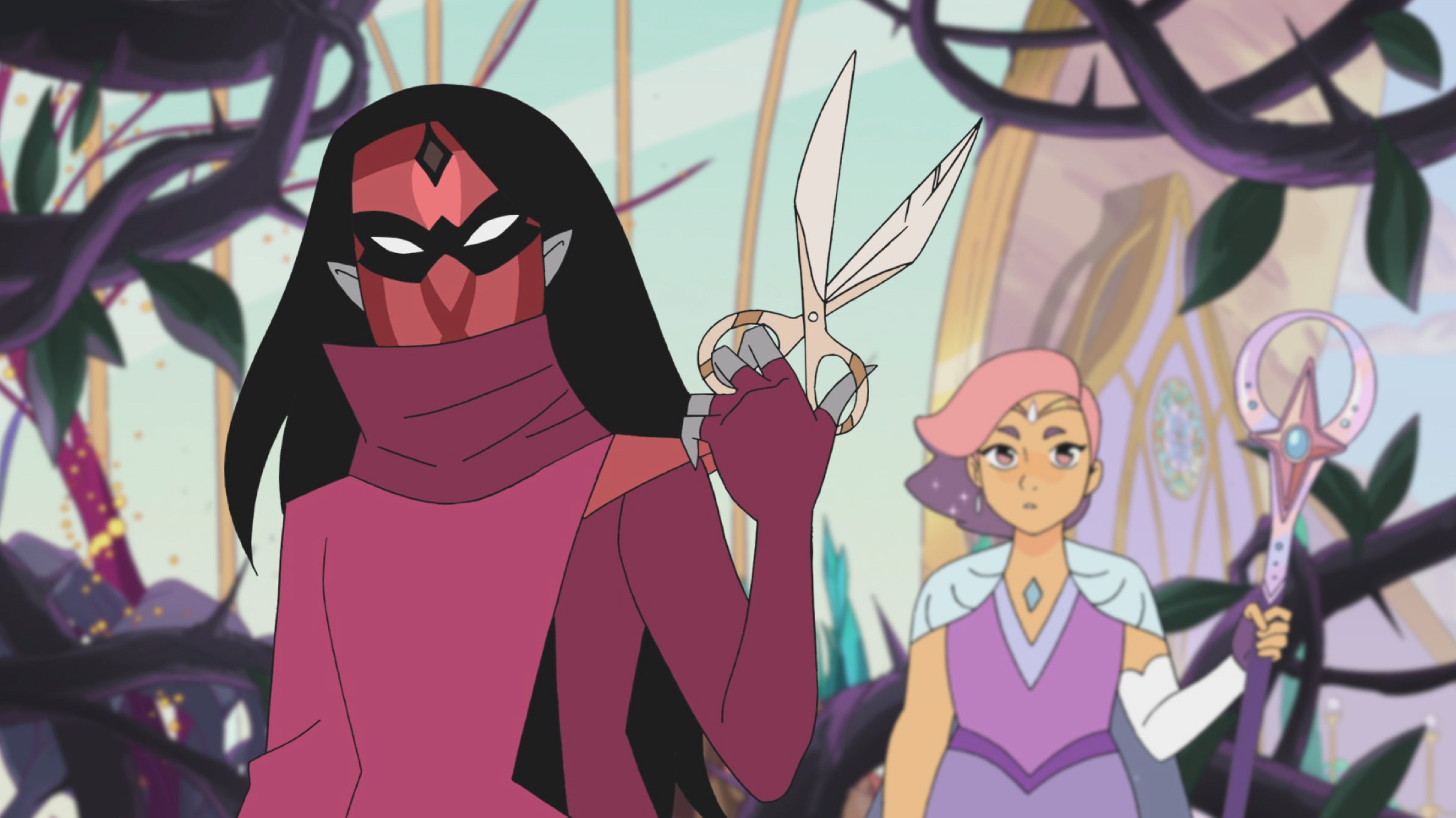 Interestingly, in trying to cope with their troubled friendship, each of them end up turning to a companion from the other’s past. Glimmer seeks counsel from Shadow Weaver while learning to grow her powers, and Adora goes on more missions with Bow. If there’s one disappointment this season, it’s that the show didn’t seem interested in fleshing out Adora and Bow’s relationship. They have fun, sure, but for all the time they spend together, we don’t get many heart-to-hearts that aren’t connected to their mutual friendship with Glimmer. I would have liked to see their dynamic expanded, perhaps giving both of them a chance to show a side of themselves they don’t share with anyone else.

Across the forest and through the Horde, we have Catra. As long as I’ve been covering She-Ra, including this piece I wrote about Scorpia, I’ve heard from several people who think Catra is beyond redemption. I don’t personally believe this, but I can understand why some do – especially after watching this season. Catra’s behaviour is toxic, unhinged, and worse than ever. This is a woman who has it all but still can’t keep it together. By knowing Hordak’s secret weakness, she’s able to exploit it for her own ends, but she’s still not satisfied and takes her anger out on others. In her private moments, we see how torn up Catra is about the choices she’s making. But here’s the problem: She keeps on making them.

Nowhere is this more apparent than her relationship with Scorpia. The series has never been shy about representing Catra’s treatment of Scorpia as harmful and unsustainable but in season four it passes the point of no reason. We spend much more time with Scorpia as she continues trying to justify Catra’s actions, as others like Kyle, Lonnie, and Rogelio (who get their own side plot in one episode) begin to lose faith in Catra’s leadership. I don’t want to spoil what happens, suffice to say that Scorpia gets some long-overdue agency as we learn more about her, her family, and what she wants out of life. It was great to see this character come out of her “shell,” if you’ll pardon the pun – and it doesn’t hurt that Lauren Ash, the actress voicing her, lands every scene she’s in. Side note: Don’t skip the opening credits. 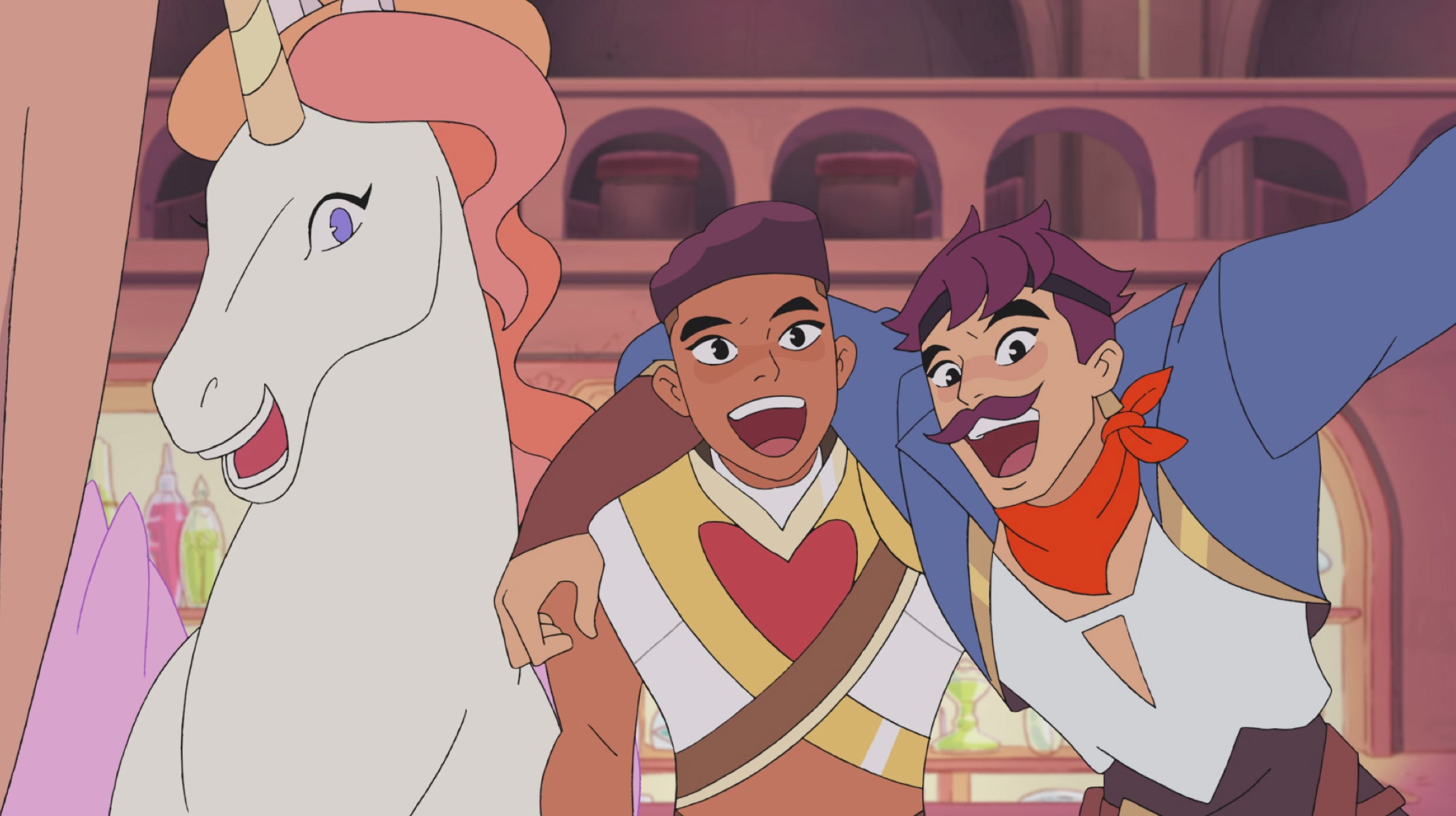 That’s not the say this season is a total downer, as there are a few moments of fun. Double Trouble, the shapeshifting mercenary, is an exciting addition. They’re not slimy, shifty, or other tropes typically applied to shapeshifting characters. Like Entrapta, they’re someone who cares more about their craft than other people, so they have little interest in fearing or abetting Catra’s rage. In that, they become the only person Catra feels she can be truly honest with. There’s also the time Sea Hawk, Bow, and Swift Wind head out for a “boys night” that goes terribly wrong, and an episode where Mermista uses her love of detective novels to solve a mystery, which felt like a version of season three’s standout roleplaying game episode. But the moments of fun come at a price, as they’re usually followed by some form of tragedy or pain.

This is a big season, and there’s a lot to unpack from where it’s been and where it’s going. We do get a couple of major surprises, including an answer to one of the biggest questions of the series. And there’s a big climax that, while not as emotionally devastating as season three’s portal episodes, raises the stakes for She-Ra’s future like never before. Of course, Netflix has yet to officially renew the show but considering all the creators have worked toward so far, I can’t imagine it not continuing.

She-Ra and the Princesses of Power is doing a lot. It’s moving fast – some have argued too fast – and it’s asking a lot of its audience. But here’s the thing: It’s working. She-Ra is stronger than ever. It’s growing and expanding, enveloping us in its complex world where nothing comes easy. Like Steven Universe: The Movie, She-Ra is showing that the work of doing good is never over. Just when you think things might be okay, something else happens to pull the rug out again. I’m excited to see where we go next.

Tags:
streaming
netflix
animation
tv
she ra and the princesses of power