The Star Wars Holiday Special is legendarily bad, and it lives up to every part of that legend. Airing once in 1978 and never again, it’s a travesty that makes Jar Jar Binks seem both understated and dignified. But that’s not to say it’s entirely without benefit! In fact, it’s full of helpful tips for throwing a perfect party for your friends and family this season – all of which we’ve gathered here, so you don’t have the excruciating experience of watching the damn thing. Read on to make sure your holiday fest is as festive as can be, and I assure you, I am making none of this up. 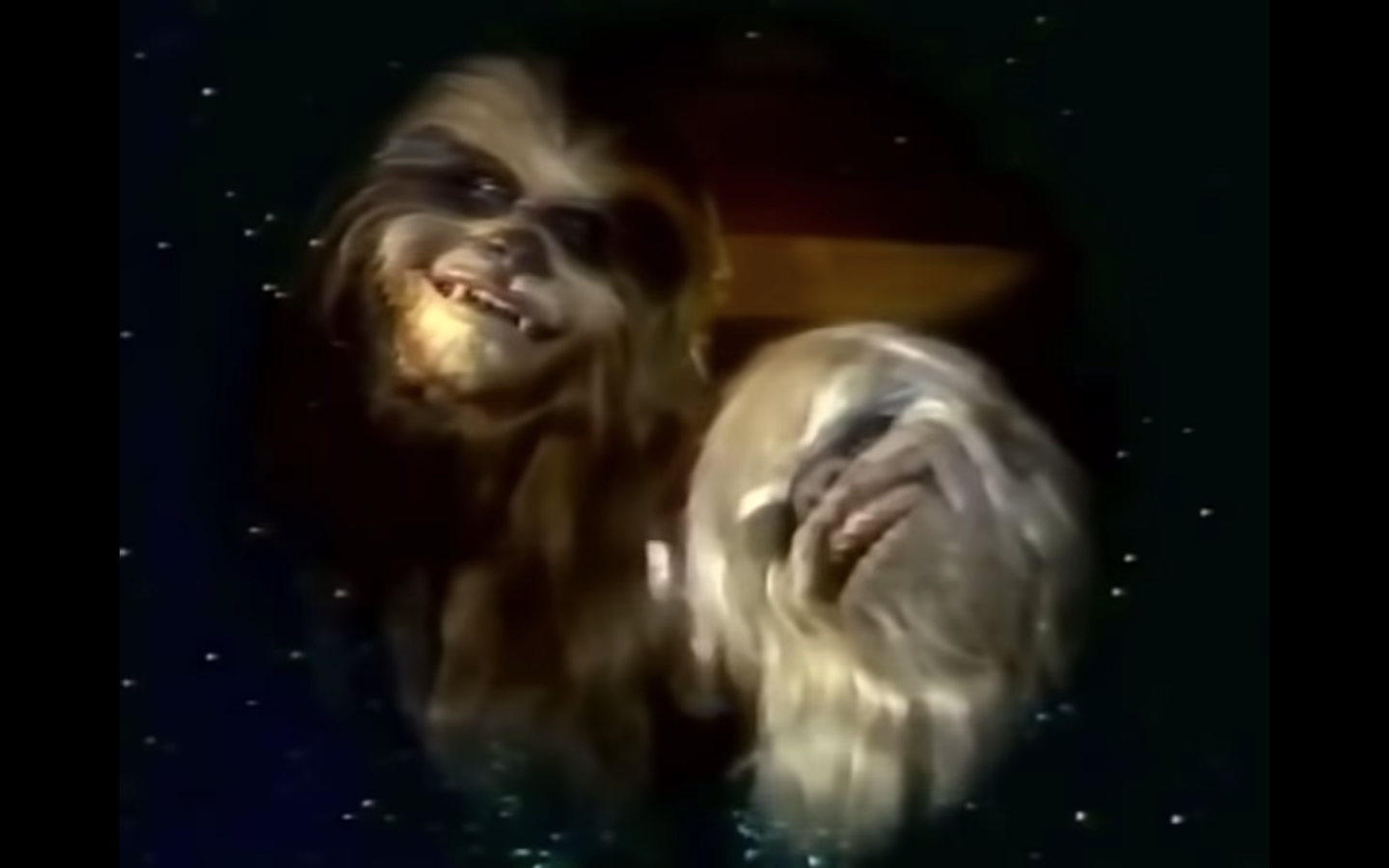 1) Remember, the holidays are first and foremost about family and loved ones.

Before you plan any party, it’s worthwhile to take a moment to think about what’s important…and who’s important. For example, the Star Wars Holiday Special focuses primarily on Chewbacca’s family – his wife Malla, his father Itchy, and his son Lumpy – as they await their furry patriarch’s return for the Wookiee holiday called Life Day. Unfortunately, he’s late, because he and Han Solo are being pursued by the Empire, mainly in the form of reused footage from Star Wars. I don’t know what was so important Chewie risked missing his people’s most important and goofiest ceremony, but he should have prioritised better.

It’s a no-brainer, but it pays to remember not everyone celebrates Christmas, and it doesn’t cost you anything to call your get-together a holiday party instead of a Christmas party. It’ll help all your guests feel welcome and included, quite unlike the Holiday Special, which begins with nine brutal minutes of the three Wookiees unintelligibly growling at each other, without subtitles. See for yourself. (Kidding. Don’t watch this movie or any of the clips below. You will regret it.) 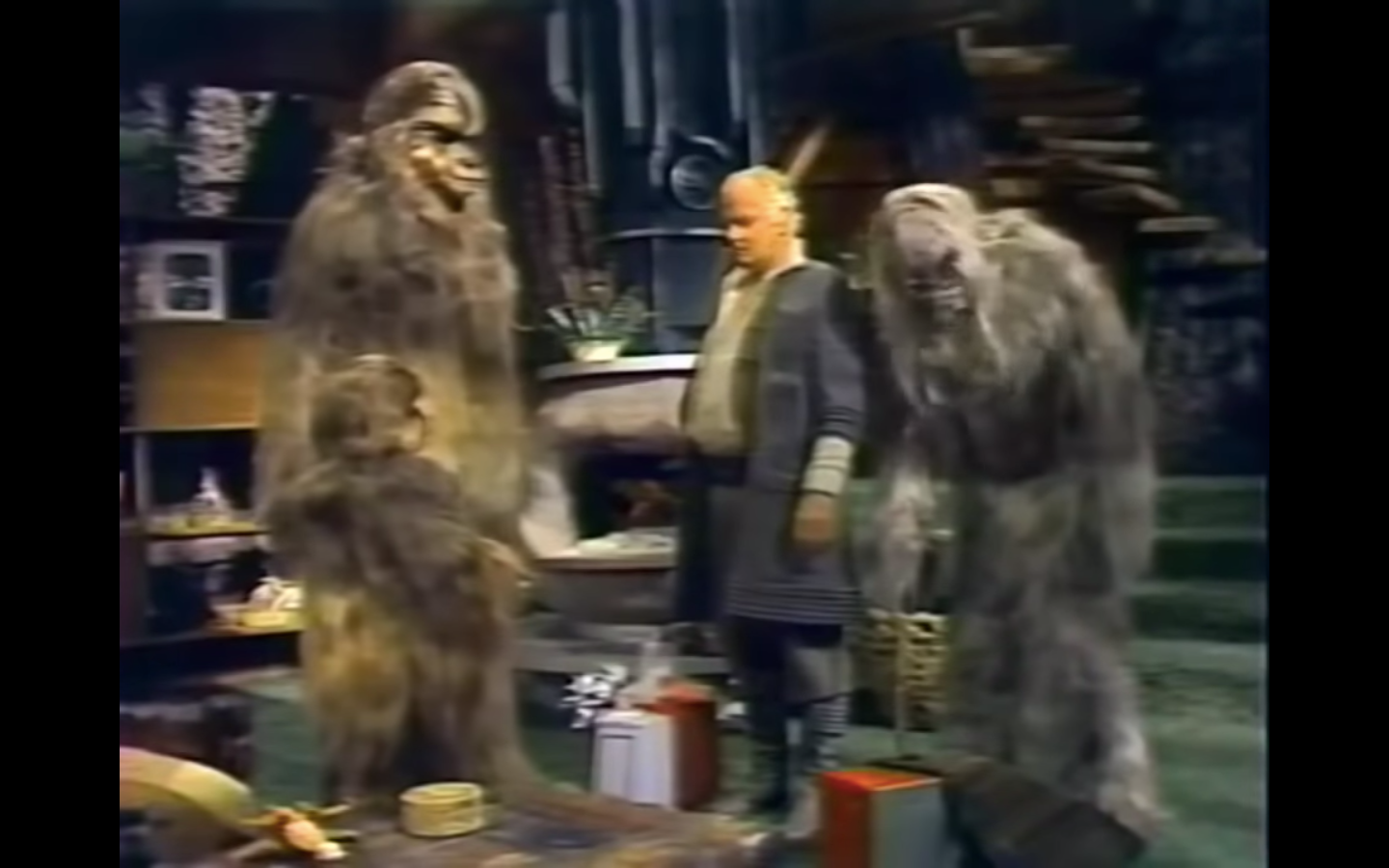 The horrible Saun Dann (Art Carney) invites himself over to Chewbacca’s horrible home in the horrible Holiday Special. (Image: Lucasfilm/Disney)

3) A holiday party can be a great time to make new friends!

While loved ones should be your priority, the spirit of the season should move you to invite a few newcomers to your festivities, particularly if they seem like they might be spending their holidays all alone. That certainly was the case for The Honeymooners’ Art Carney, who plays Saun Dann, a local human trader on the Wookiee planet of Kashyyyk who stops by to help Chewie’s family out and provide the audience with some badly, badly needed English dialogue. Dialogue such as asking Malla, “You got any more of them Wookiee-Cookies?” Guys, it’s just so bad.

Decorating, cooking, cleaning – there’s a lot that needs to be done before your first guest arrives, and if you don’t make a well-thought-out game plan ahead of time, you run the risk having to rush through steps, which can lead to disaster. For instance, Malla tries her best to do cook a “Bantha Surprise” (sigh) by watching a cooking instruction video from “Chef Gormaanda” (sigh). The chef is played by The Carol Burnett Show’s Harvey Korman in drag and with four arms, with the “joke” being that Malla can’t keep up with Gormaanda’s furious four-armed mixing. Korman appears as two other characters in the special, both also painfully unfunny.

Get enough people, a few decorations, some good music, and a fully stocked bar, and everyone should enjoy themselves without the need for you to show a holiday movie, or play games that could grind your party to a halt. For example, in the video above, Lumpy takes time to watch whatever the fuck that was, and it feels like being stuck in an endless nightmare tornado full of people gadding about in brightly coloured tights.

6) That said, if you need to get kids out of the way, feel free to sit them in front of the TV.

The holidays are a busy time, and it can be tough to manage kids while trying to get everything else done. The simplest solution is to just stick them in front of the TV, as Malla does to Lumpy to keep him occupied when Stormtroopers arrive at their treehouse looking for Chewbacca. It worked out for both Lumpy and the audience, because unlike the mediocre gymnastics nightmare from the beginning of the special, this meant the audience got to see an animated short starring Luke, Han, and the introduction of future Empire Strikes Back character Boba Fett. It’s literally the only slightly-good part of the entire Holiday Special.

7) Don’t give people pornography as a gift.

A virtual woman appears, played by actress/singer Diahann Carroll, who wears a diaphanous dress and talks seductively to the elderly Wookiee, telling him that “we can have a good time” and how she finds the gross, shrivelled alien to be “adorable,” before breathily asking him to “experience me,” all while Itchy moans and twitches and gets more and more excited. All while you have to watch, and it takes forever, and it’s horrible, so horrible, and oh my god how did anyone think this nightmare was OK!?

8) If you do give people pornography as a gift, don’t give them interspecies pornography.

You might think a Wookiee would be interested in seeing other Wookiees have graphic intercourse, but Itchy’s tastes are a bit more exotic. Carroll doesn’t play an alien, just a human woman. It’s Itchy’s perfect fantasy, as the script goes out of its way to note. “I don’t have to ask how you find me. After all, I am your fantasy,” Carroll says seductively. “I exist for you. I am as you create me. Oh, yes. I can feel my creation,” she giggles in pleasure.

9) If you give people interspecies pornography as a gift, do not let them watch it in the living room in front of people.

There’s got to be a limit, guys.

10) Carolling can be a fun way to end the night.

A group sing-along at the end of the evening can be a nice way to cap off a good holiday party. Not everyone enjoys singing, but if a certain amount of drinking has been going on, lips and tongue may be loosened. Of course, it should be a group decision, instead of someone just belting out a song, much as Princess Leia does during the Wookiee’s Life Day ceremony. Titled “A Day to Celebrate,” it seems to have been intended to be sung to the tune of the Star Wars main theme, but very much is not, and includes lyrics such as “We celebrate a day of peace, a day of harmony / A day of joy we can all share joyously.” Despite all its joyous joy, the song was not destined to become a holiday classic in any galaxy. 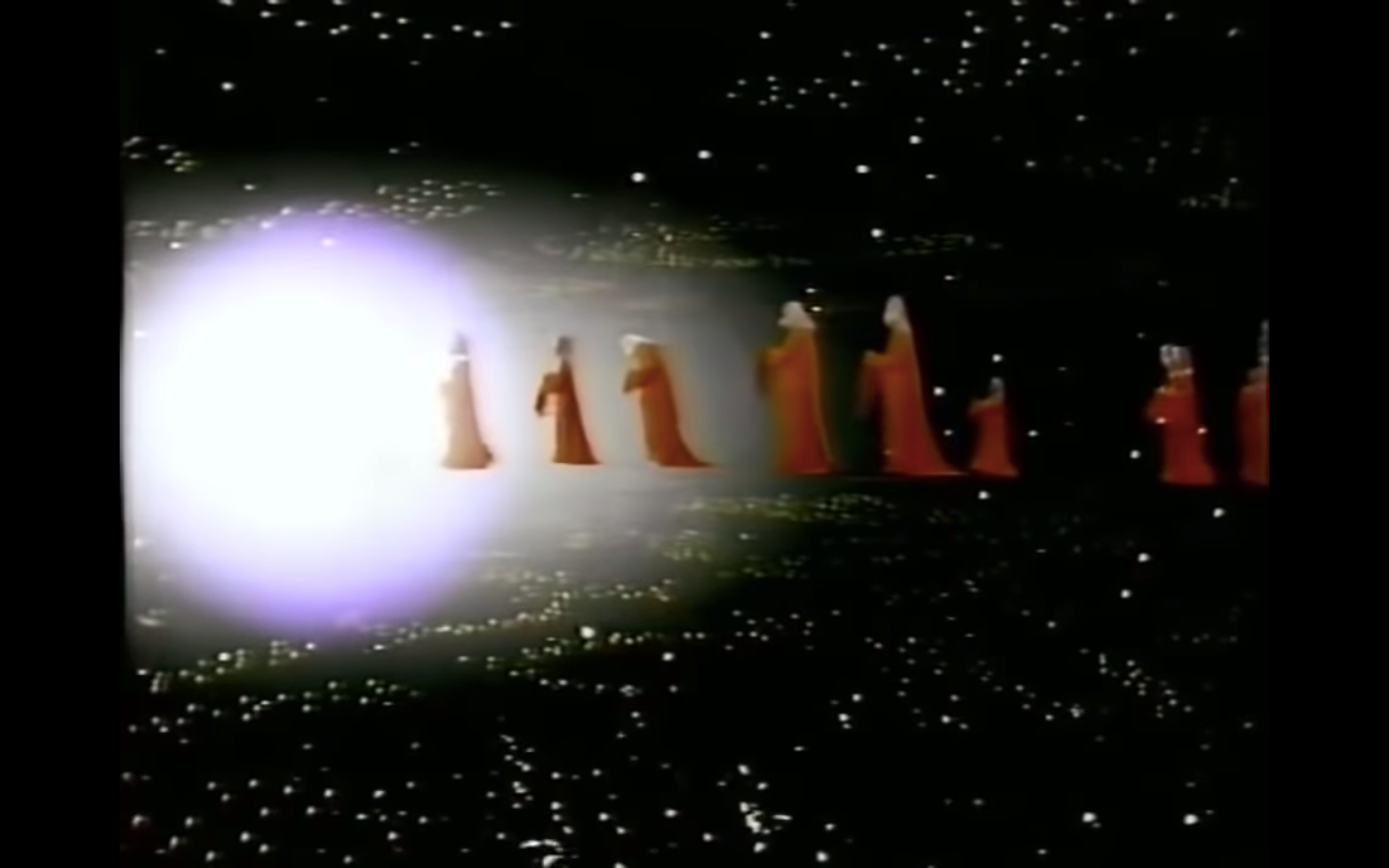 The Wookiees walk into a goddamn star, much as you’ll want to do if you watch the horrible Holiday Special. (Image: Lucasfilm/Disney)

11) Be tolerant of other people’s beliefs.

If you attend a party that does have specific traditions or religious affiliations, you should never denigrate them, no matter how odd they may seem to you. For instance, even though the Wookiee holiday of Life Day seems to consist solely of Chewbacca and his family grabbing light bulbs, putting on red robes, and then literally walking through the dark void of space into an actual star, don’t point out the utter insanity of the ceremony, or how they should all be dead.

12) If you’re a guest, don’t overstay your welcome.

Unless your hosts walk into a goddamned star, it can sometimes be tough to tell when a party is wrapping up. You don’t want to be that last guy in the place who doesn’t know when It’s time to go home. It’s a common enough problem that The Golden Girls’ Bea Arthur, moonlighting as a new bartender in the Mos Eisley cantina named Ackmena, announces last call for her customers and then has to sing “Goodnight, But Not Goodbye.” In my opinion, it’s the most tolerable live-action scene in the whole special. 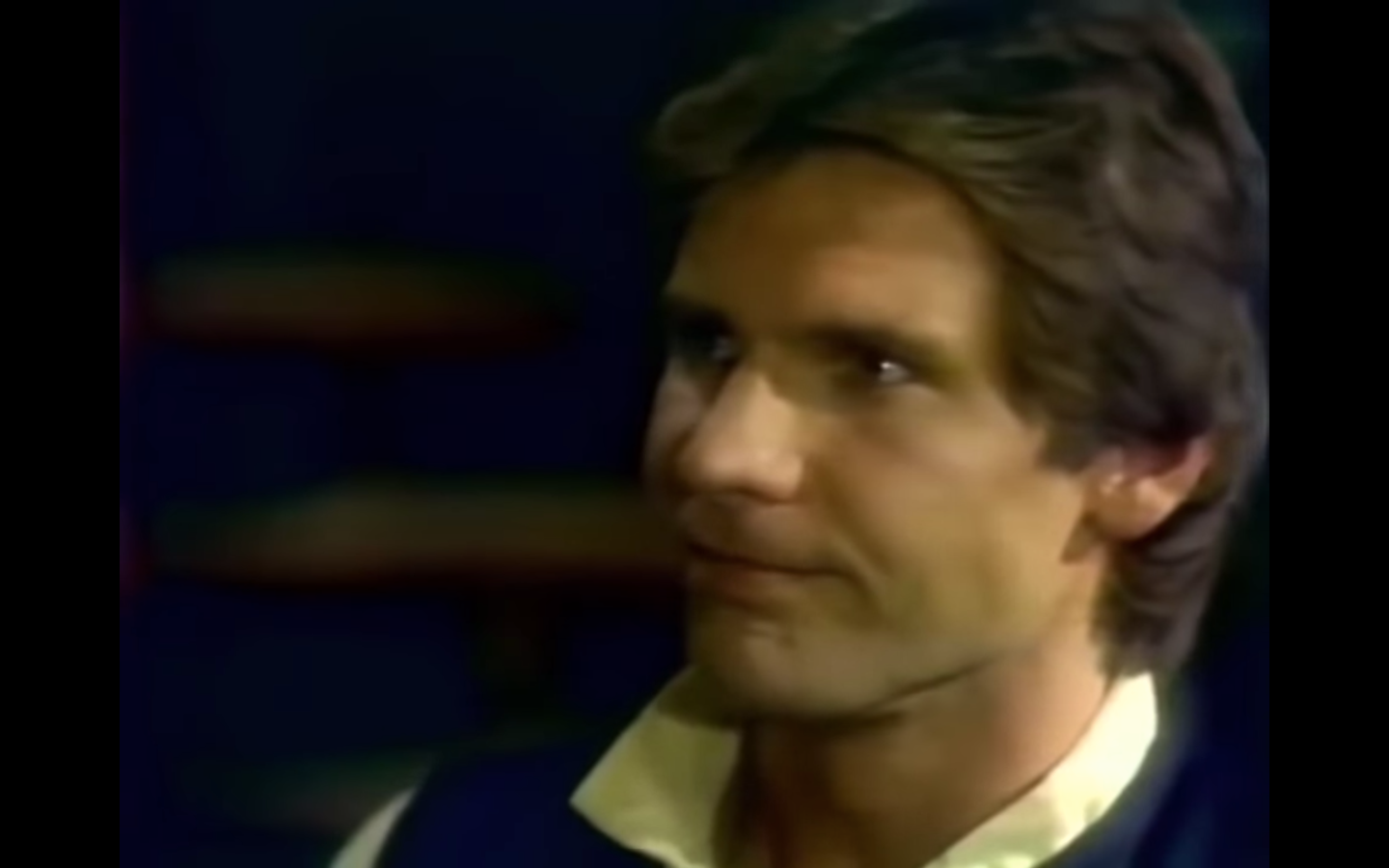 13) Do not invite Harrison Ford to your holiday party.

He does not want to be there. He will not say anything, but he will radiate his displeasure until he fulfils his social and/or contractual obligation to attend and then he will leave as soon as is humanly possible.