Deforestation Is a Death Sentence for Tropical Forest Animals

The wildlife that rely on tropical rainforests may be more screwed than we thought. A new study has found that tropical forest species are six times more sensitive to forest fragmentation than species in temperate ecosystems.

The research published in Science on Thursday takes a deep dive into the topic of forest fragmentation, which occurs when vast forestlands are cut up into smaller patches due to logging, farming, or fires. Forest fragmentation is bad for all of us but especially the species that inhabit it and other tropical rainforests also under siege.

That’s due to a number of reasons: less land for animals to call home, increased vulnerability to predators, and the cascade effects throughout the ecosystem. However, some species deal better with reduced tree cover and increased forest edge habitat – and that’s largely those that have had a chance to practice. The results have huge implications for conservation going forward.

“These [findings] really emphasise the importance of conserving habitat in these areas and, in particular, conserving large blocks or large areas of contiguous habitat that will help prevent fragmentation from having negative effects on species,” said study author Christopher Wolf, a research associate at Oregon State University’s Department of Forest Ecosystems and Society.

The authors—who hail from universities and institutions around the world – used 73 datasets to analyse 4,489 animal species including birds, reptilians, arthropods, and mammals. 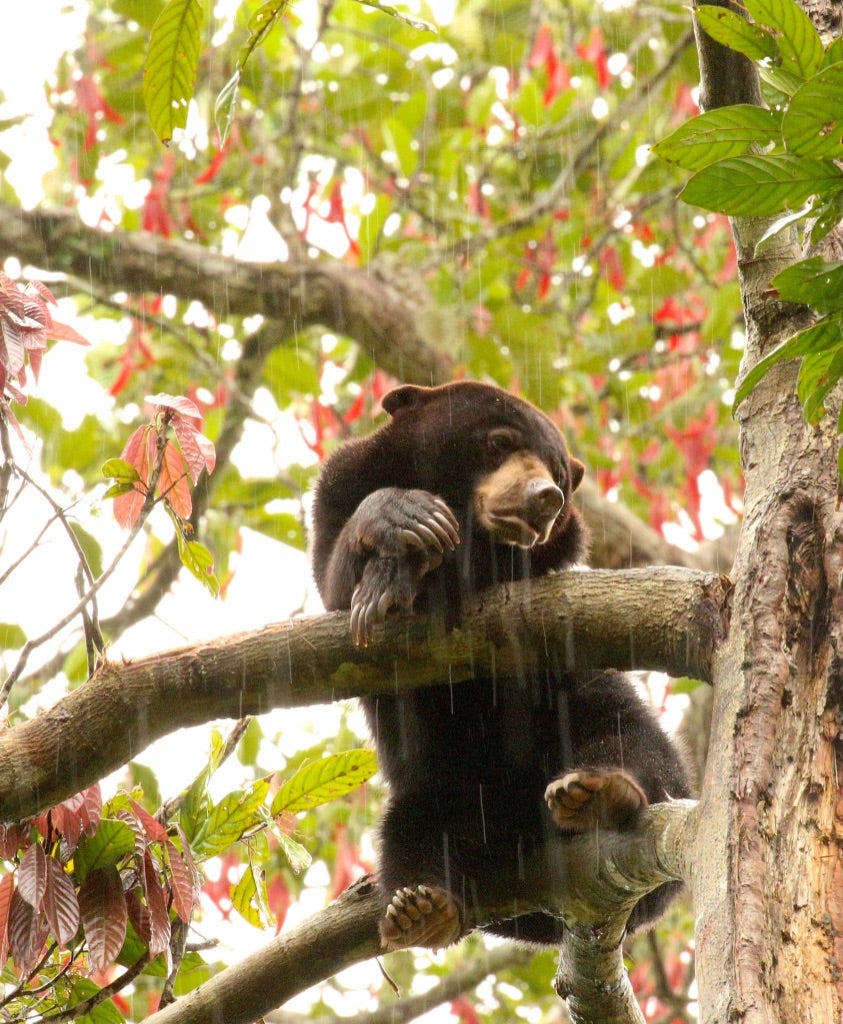 This little guy – a sun bear, found in Malaysian Borneo – is threatened by this fragmentation. (Photo: Matt Betts)

These datasets include geographic points throughout specific landscapes around the planet and what animal species scientists have recorded there, as well as their abundance. From there, the team of researchers categorised these species by specific habitats. Some preferred forests with heavy tree cover far from the forest edge. Others were found along the edge. And then there were those animals that seem to make a home just about anywhere in the forest.

Animals that avoid the edge of forests are the most sensitive to this type of fragmentation. If scientists aren’t finding them here, it’s likely because they can’t succeed in such a habitat. More than half the species living in low-disturbance regions (which generally covers tropical forests) avoid edge zones. In high-disturbance regions (which are generally temperate forests), that percentage drops to about 18 per cent.

The research suggests the reason for the differences is a result of natural destruction that preceded humanity’s attack on forests. Thousands of years before destructive humans walked the Earth setting fire to shit and cutting down everything they could see, many ecosystems still saw major disturbances in the form of fires, glaciations, and hurricanes. Temperate forests at higher latitudes have tended to be disturbed more regularly, and researchers argue that these places have fewer sensitive species and more resilient ones as a result.

As for tropical forests? They haven’t generally seen this level of change throughout history to have the evolutionary upper hand in the modern era where humans are the cause of massive deforestation, which is a bummer given how deforestation just does not let up throughout tropical regions. These findings are also particularly worrisome because tropical rainforests support at least two-thirds of the world’s biodiversity. Think of the Amazon, for example. Years of deforestation (which has skyrocketed this year) has fragmented it so much that scientists predict it could essentially become two separate forests within a few decades.

But the new findings confirm these species in tropical forests all around the world are at risk. And these patterns were fairly consistent across taxonomic groups. In other words, birds, reptiles, and mammals in tropical forests are equally fucked. The Sunda clouded leopard of Borneo forest is under threat. As is the great tinamou of Central and South America, a cute grey little hunchback ground bird. Every ecosystem requires special local attention to figure out how to properly protect the animals that call it home, but these findings support the drive to set aside larger blocks of tropical forests if we want to conserve biodiversity.

Given the amount of data the researchers analysed, there’s always a chance they categorised an animal, Wolf said. And the data they’ve received may contain some bias depending on where data points are located throughout a landscape, but that’s something the researchers controlled for in their models. They’re confident in their results. And given the way tropical forests have been treated over the past few decades, that should scare the shit out of all of us.