Physicists are reporting the results of a test to squeeze the vacuum of spacetime itself in order to better detect gravitational waves from colliding black holes.

Extreme extraterrestrial events, like two black holes colliding or supernovae, may produce ripples in spacetime called gravitational waves. Here on Earth, a suite of observatories attempts to measure these ripples using lasers – but the wave effects can be so subtle that even the randomness built into empty space itself gets in the way of the experiment’s sensitivity. But this new method, the result of decades of research, has allowed researchers to suppress this noise and extend the reach of the gravitational wave detectors.

“The method enables us to increase the distance in the universe at which we can detect gravitational waves,” one of the study’s authors, Laura Barsotti, principle research scientist at the MIT Kavli Institute for Astrophysics and Space Research who works on LIGO, told Gizmodo.

The Laser Interferometer Gravitational-wave Observatories (LIGO) and the Virgo gravitational wave observatories rely on the principle of interference patterns created by overlapping laser beams. A laser beam passes into an optical element that splits it into two beams, then sends each beam down one of two kilometres-long pipes and into a mirror, which bounces them back into the optical element that rejoins them. Light (even laser light) travels as a wave, so when the beams meet back up, they add into a new wave. A passing gravitational wave would slightly change the distance that one of the laser beams travels, leaving its signature on that corresponding final wave as the beams travel in and out of phase with one another.

But after the laser leaves the beam splitter, it must travel through the quantum fluctuations of the machine’s vacuum. One consequence of quantum mechanics, the theory that governs how subatomic particles interact, is that on the smallest scales, there are tiny wobbles of increasing and decreasing energy. These fluctuations introduce a level of uncertainty in when the light particles arrive at the detector – which limits the sensitivity of the detector, since it’s harder to see the change in the light’s phase introduced by the gravitational waves. Physicists have now achieved a way to suppress those quantum fluctuations by injecting “squeezed vacuum states” into this final piece of the experiment.

One of quantum mechanics’ core principles, the Heisenberg uncertainty principle, says that certain pairs of properties, such as a particle’s position and its momentum or its energy and the time it arrives, cannot be simultaneously measured precisely; increasing the precision in one of the values decreases the precision in the other, and vice versa. Squeezing is a way to increase the precision (and decrease the noise) of the value that physicists are more interested in at the expense of the other. 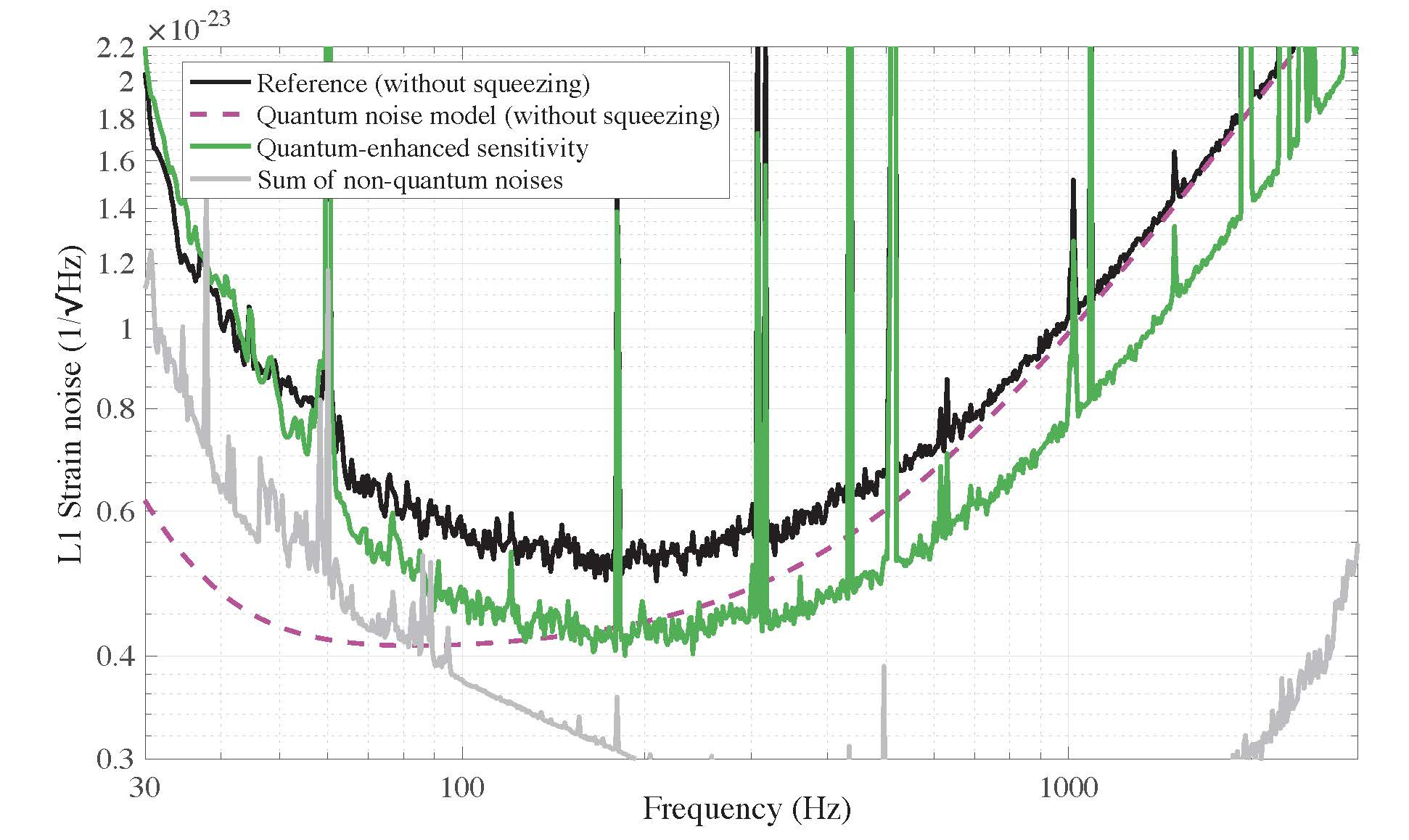 The black line shows the amount of noise at a given frequency without squeezing. The green shows the effect of the squeezing – less noise. (Graphic: LIGO)

The workhorse of the noise-suppression mechanism is a special kind of crystal with tunable optical properties. The crystal links a laser beam passing through it to the energy fluctuations of the vacuum, allowing researchers to create a new field in which they’ve shifted the noise of the property they’re more interested in (phase) onto the property they’re less interested in (amplitude). They pass this light back to the output of the interferometer, where it replaces the noisy vacuum with this new, squeezed field. This is reflected on the final laser output, which now has less noise in its phase measurements and more in its amplitude. In order to reduce noise from stray light produced by the tuned crystal itself, the core components of the squeezer sit inside the LIGO vacuum. Researchers are reporting the success of this method in the LIGO and Virgo detectors today, in papers published in Physical Review Letters.

It’s a big deal. “This achievement is a beautiful demonstration of how quantum technology can enhance precision instruments and push the boundaries of science,” Ping Koy Lam, a professor of physics at the Australian National University who was not involved in this study but who works on squeezing for gravitational wave detectors, told Gizmodo in an email.

There’s no free lunch here: The shifted noise is reflected as no decrease and perhaps even a slight increase in uncertainty for lower-frequency gravitational waves. In the future, physicists hope to squeeze the amplitude for the lower frequencies and the phase for the higher frequencies, Nergis Mavalvala, MIT astrophysics professor who contributed to the research, told Gizmodo.

LIGO and Virgo now using this squeezing to increase sensitivity as they continue to search for the gravitational waves from colliding black holes. But for the paper’s lead author, graduate student Maggie Tse, one of the most exciting parts was seeing the often incomprehensible, hard-to-measure world of quantum physics play out in real life. She told Gizmodo: “Turning the creepy quantum states into something tangible is magical.”