A 7,000-year-old seawall has been discovered off the Israeli coast, and it’s now the oldest-known defence against rising sea levels. The seawall eventually failed, and the village had to be abandoned, in what’s serving as an ominous lesson from the past.

The Tel Hreiz archaeological site is located off the Carmel coast of Israel and once hosted a vibrant Neolithic community. This Mediterranean settlement thrived for hundreds of years, as its villagers hunted gazelle and deer, farmed cows and pigs, fished for tilapia, raised their dogs, and manufactured copious amounts of olive oil.

All seemed well, but this community was completely oblivious to something we’re all too familiar with today: massive amounts of melting ice. But whereas we’re responsible for the current climate catastrophe and the associated rise in sea levels, these Neolithic people were completely innocent. The Pleistocene and the last major ice age had come to an end just a few thousand years before. 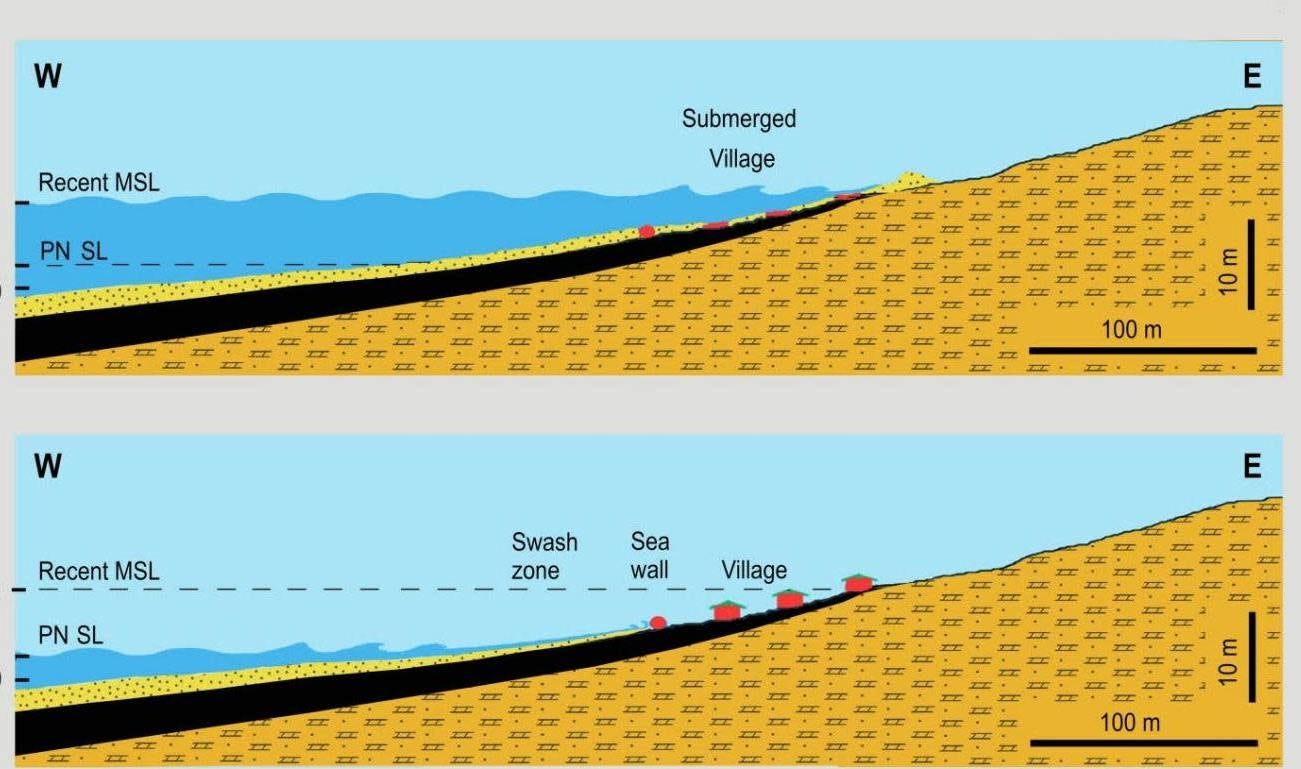 Cross section illustrations showing the submerged village as it appears today (top) and how it appeared during the Neolithic period (bottom). (Image: J. McCarthy, E. Galili, and J. Benjamin)

They couldn’t have known that, of course, but even still, the original settlers wisely built their village 3 metres above sea level. With each passing generation, however, the villagers would have noticed something rather frightening: The waters of the Mediterranean were getting higher and higher.

Indeed, according to new research published this week in PLOS One, the rising sea levels would have been noticeable across a person’s lifespan, as they rose at an alarming rate of 4 to 7 millimetres each year, or around 70 centimetres (28 inches) every 100 years. Reluctant to leave their cherished settlement, and to protect against the increasingly powerful waves and the destructive effects of erosion, the Tel Hreiz villagers decided to take matters into their own hands by constructing a 100-metre-long (330-foot) seawall that ran parallel to the shore.

The seawall may have helped for a while, but it ultimately failed, and the village – after nearly 500 years of continuous occupancy – had to be abandoned.

Such are the findings of the new PLOS One study, which involved an international collaboration of scientists from the University of Haifa, Flinders University in Australia, the Israel Antiquities Authority, and the Hebrew University. The seawall, which is today submerged under 3 metres of water, was constructed some 7,000 years ago, and it’s now the oldest known coastal defence system in the archaeological record. It’s an exceptional find, as infrastructure improvements such as these didn’t start to appear in the region until the Bronze and Iron Ages.

Importantly, the new research, led by archaeologist Ehud Galili from the University of Haifa, shows that humanity’s battle against rising sea levels dates back for thousands of years. 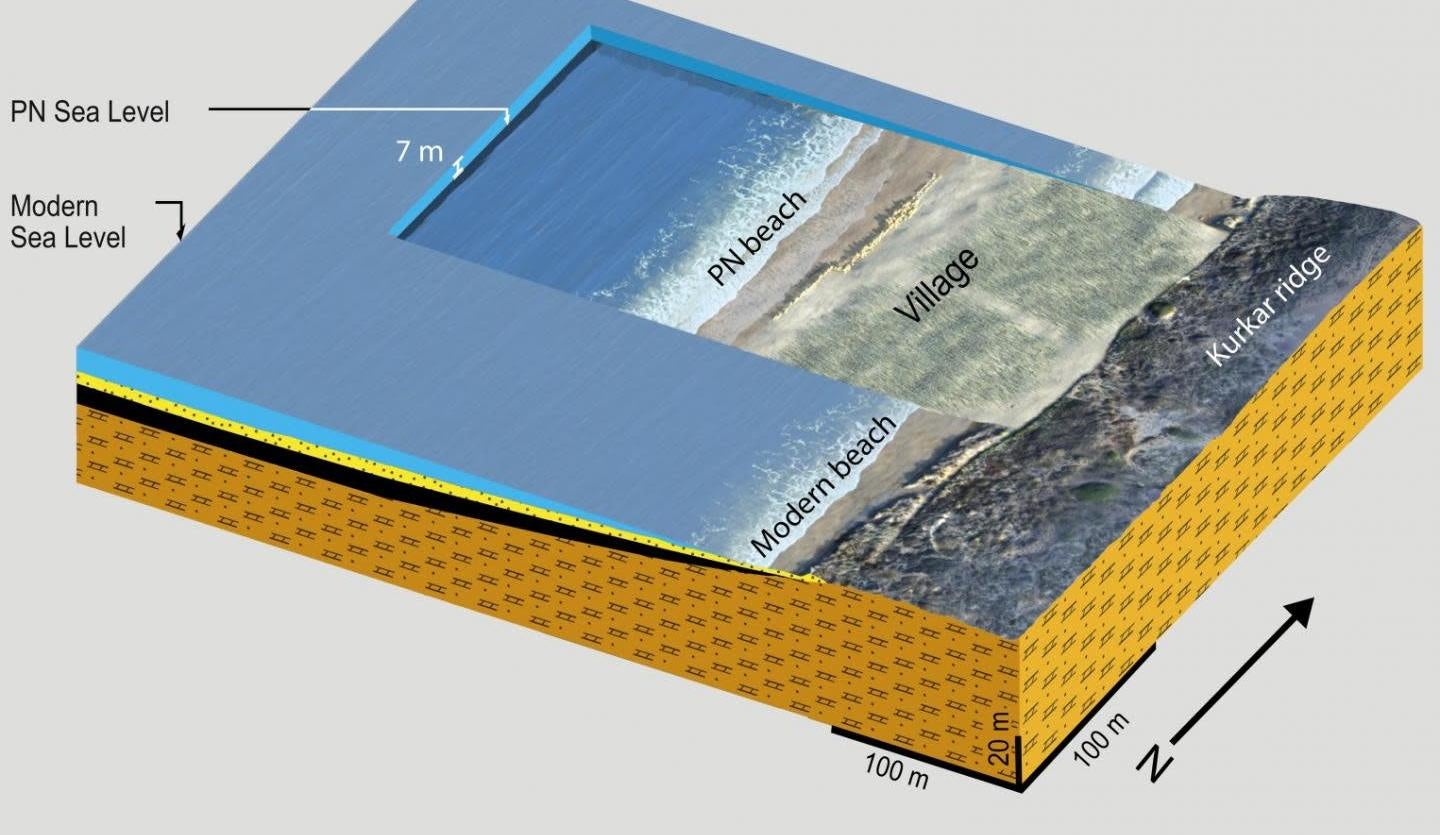 Model showing the location of the Neolithic village compared to the how the beach looks today. (Image: J. McCarthy, E. Galili, and J. Benjamin)

The submerged Tel Hreiz site was originally discovered in the 1960s, but it hadn’t been thoroughly explored by archaeologists until recently. Since 2012, the site has yielded various architectural structures, artefacts, the remains of both humans and animals, and now, the ancient seawall.

The seawall, as the new research suggests, was nothing too fancy, having been built by piling large boulders atop each other. That said, it likely required a lot of work and coordination to build. The seawall’s length, the use of big boulders sourced from outside the community, and its careful arrangement on the shore “reflect the extensive effort invested by the Neolithic villagers in its conception, organisation and construction,” wrote the authors in the study.

Naturally, this prehistoric history lesson serves as a dire warning for us today.

Self-inflicted climate change is predicted to lift the oceans by as much as 1.7 to 3 mm each year over the course of the current century, according to IPCC estimates. That’s smaller than what was experienced during the Neolithic, but these sea level rises will still be problematic for coastal communities. This will inevitably result in the construction of more modern seawall defences, but the ocean, as our Neolithic forebears witnessed themselves, is powerful and unforgiving. Like them, we too may have to reluctantly abandon our cherished communities.