Palaeontologists in China have discovered the fossilised remains of a rodent-like creature that featured an auditory system unlike anything seen before.

Introducing Jeholbaatar kielanae, a vole-like mammal that lived approximately 120 million years ago during the Cretaceous period. Its well-preserved fossil was pulled from the Jiufotang Formation in China’s Liaoning Province, and then analysed by researchers from the Institute of Vertebrate Palaeontology and Palaeoanthropology in Beijing. The results of their work were published last week in Nature.

Weighing just 50 grams (1.75 ounces or about as much as a golf ball), this creature managed to eke out an existence among the dinosaurs, and it did so by virtue of its unique chewing style. Jeholbaatar used its teeth to slice up bugs and small vertebrates, but it could also grind up plants prior to swallowing. This diverse, omnivorous diet required a back-and-forth chewing style, instead of the more conventional side-to-side style. But as the new paper suggests, this chewing style, known as palinal motion, required a specific kind of jaw – a jaw that in turn led to the evolution of a hearing apparatus not seen in any other mammal, past or present. 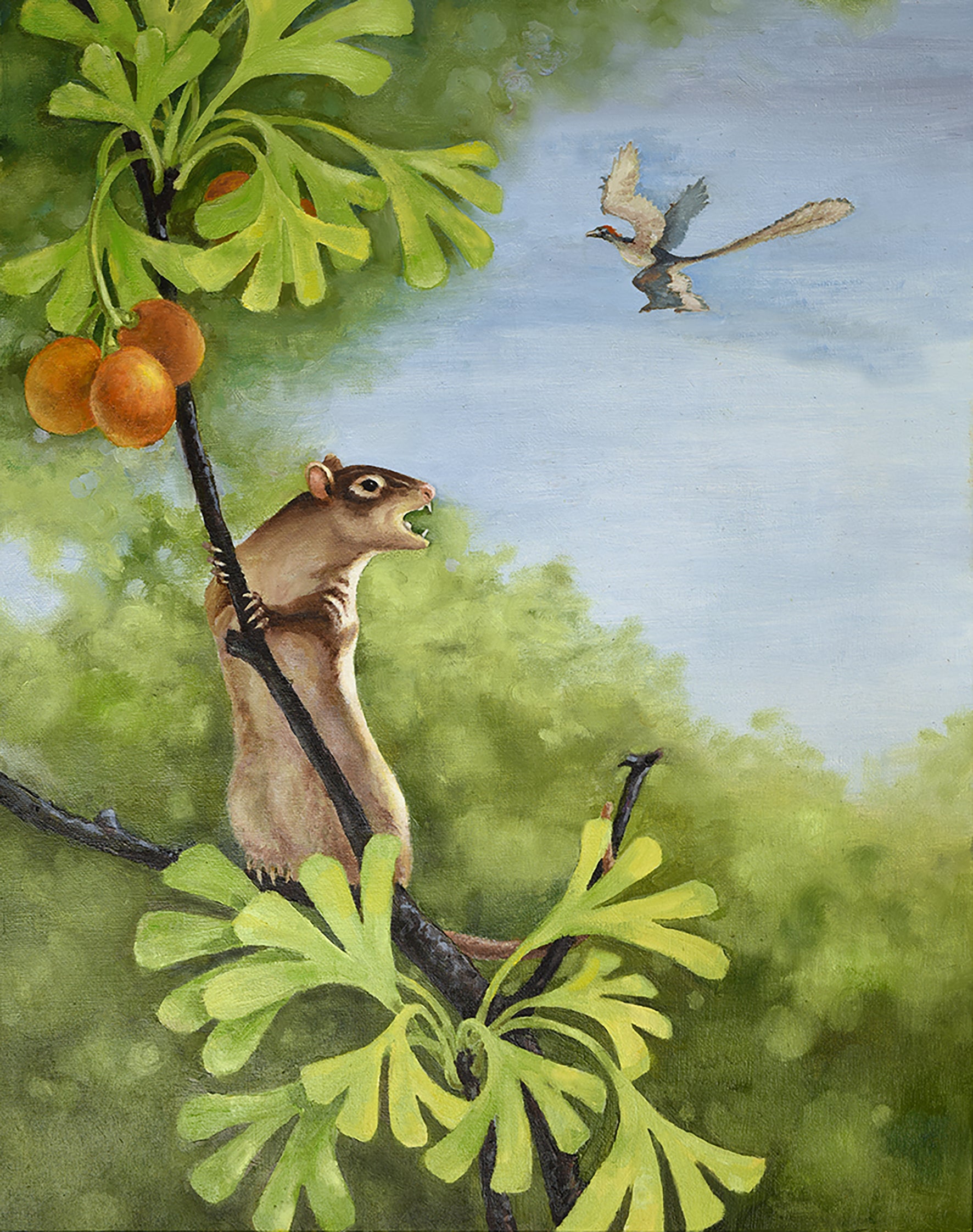 Jeholbaatar kielanae. A four-winged avian dinosaur known as Microraptor is shown in the background. (Image: Yong XU of IVPP)

Mammals have unique ears compared to other vertebrates, such as reptiles. All living mammals have three bones in their middle ear: the malleus, incus, and stapes. Other living vertebrates have only one bone in the middle ear, called the quadrate or columella. In the past, however, things were different, explained Anne Weil, a professor in the Department of Anatomy and Cell Biology at Oklahoma State University in the US, in an email to Gizmodo.

“While all living mammals have three middle ear bones that are unconnected to the jaw, not all fossil mammals do,” said Weil, who wasn’t involved with the new study. “There are early mammal fossils that still show all the bones attached to the jaw.”

Indeed, as the fossil evidence shows, the mammalian jaw and ear changed over time as parts of the jaw gradually morphed into the skull, forming the tiny bones found in the middle ear. Fascinatingly, this anatomical development happened independently at least three times over the course of mammalian evolutionary history, and it explains why this configuration isn’t seen in all mammalian fossils. How and why this happened – and which particular mammals were involved in the process – is poorly understood.

“There have been years of speculation on what the impetus was for what became the mammalian ear bones to separate from the jaw,” Weil told Gizmodo. “The three-bone system does allow for better hearing over a greater range of frequencies. But does the ear disconnect from the jaw in evolution because hearing is important for these little critters or because there is some advantage in chewing?” 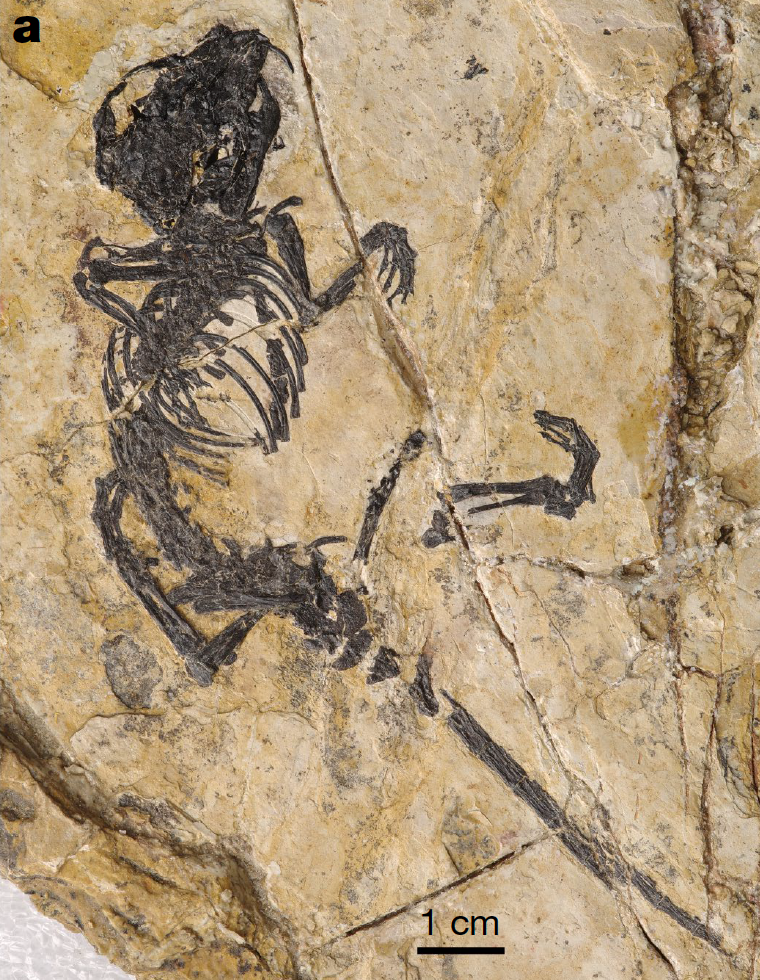 The authors of the new study say it’s the latter – at least for Jeholbaatar, which exhibited a unique hearing apparatus that likely came about on account of its diverse diet and associated jaw. Jeholbaatar belonged to an early group of mammals known as multituberculates. These mammals were wildly successful, lasting from 160 to 34 million years ago. Key to their success was their palinal motion, backwards-and-forward, chewing style.

Multituberculates could have “crunched up a tasty plant shoot or a tuber, in addition to insect larvae and smaller vertebrates,” explained Weil. Other mammals living around the same time “had slicing teeth that suggest they were eating insects and maybe small vertebrates, but couldn’t chew up plants as well,” she said, adding that if “a vertebrate is going to get nutrition out of a plant it needs to be able to chew it enough to break down cellular walls, not just slice and gulp.”

Looking at the well-preserved Jeholbaatar fossil, the authors were able to observe the specimen’s left middle-ear bones, revealing a distinctive hearing apparatus. In terms of its uniqueness, the Jeholbaatar middle ear featured an incus above, instead of behind, the malleus, but also a surangular (an element borrowed from the mandible) that existed as a separate bone positioned above the malleus. 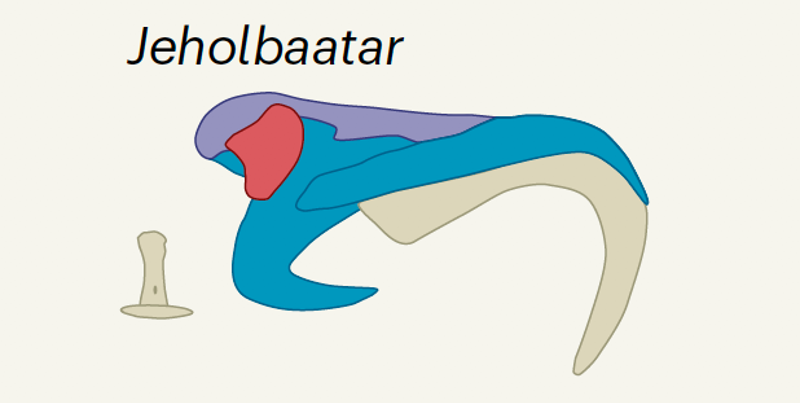 “The lineage that Jeholbaatar belongs to had a very unusual way of chewing,” said Weil. “And in that case it looks as if the lineage evolved this way of chewing, and then there was a huge advantage to disconnecting the ear from the jaw, because the animal could chew more efficiently that way.” To which she added an important side note: “That’s not necessarily true of every mammalian lineage that evolved three bones in the middle ear, though.”

Indeed, the unique features found in Jeholbaatar didn’t lead to more “modern” configurations found in living mammals, as multituberculates eventually died out. What’s important here is how this animal’s specialised form of chewing resulted in its unusual ear.

Weil said palaeontologists have a habit of talking about “the” mammalian ear, even though monotremes, like the platypus and short-beaked echidna, have ears that evolved separately from the ears of marsupials, such as kangaroos, and placentals, like humans and elephants.

“Marsupials and placentals do, as far as we know, have the same ear,” said Weil. “But Jeholbaatar belongs to a lineage of mammals which is entirely extinct in the present day, and which had an ear that definitely worked, but a little differently from ours.”

As to how this particular ear worked, and how it might have enabled Jeholbaatar to hear its surroundings differently than any other animal remains an open question – certainly something for a future study to tackle.