A new system is capable of maintaining a human liver outside the body for seven days, during which time the damaged organ can be repaired and prepared for transplantation.

At best, conventional technologies can sustain a liver outside the body for around 24 hours, but the new perfusion machine, developed by scientists from University Hospital Zurich, ETH Zurich, Wyss Zurich and the University of Zurich, now extends this limit to a full week.

Remarkably, the system can take an otherwise unsuitable donor liver and bring it back to apparently normal health, remedying problems caused by severe liver disease. The system has been tested on both pig and human livers, setting the stage for actual human transplants. The new study, led by Pierre-Alain Clavien and Philipp Rudolf von Rohr, was published today in Nature Biotechnology.

Four years in the making, the system uses novel technologies to sustain the liver outside the body, or ex vivo in the parlance of the researchers. The machine simulates normal bodily functions, such as delivering blood and oxygen, managing glucose levels and red blood cell counts, and removing waste products, among other things.

The perfusion machine while in operation, with the liver in the white container at left.

These simulated bodily functions are supplemented by the infusion of healing agents, such as nutrients and other essential compounds. Algorithms work in the background to adjust the amounts; the “perfusion machine is fully automated obviating the need for constant presence of personnel”, according to the study.

When this project first started in 2015, the initial system could only maintain livers ex vivo for around 12 hours. By testing on 70 pig livers, the researchers were able to iteratively refine the system, finding new ways to control glucose metabolism, remove waste and even jostle the liver like it would be inside a real body. With the added time ex vivo, the scientists could repair the damaged livers, clearing them of fat deposits and facilitating tissue regeneration, for example.

After this stage, the scientists took 10 human livers that had been rejected for transplantation and that would have been discarded due to their poor condition. Of these 10 injured livers, the perfusion machine was able to coax six back to health after seven days. Lab tests were positive, showing normal function, robust cellular energy and intact liver structure. 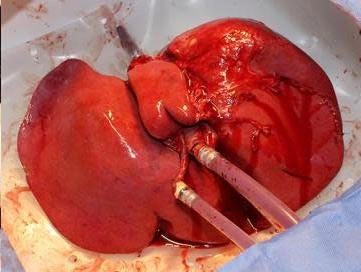 A liver hooked up to the perfusion machine.

That said, the livers lost weight during the seven days, dropping to around 25 per cent of their original mass. The scientists aren’t sure why this happened but believe it shouldn’t have a “negative impact” on normal function.

“Overall, the results... are promising and suggest that machine perfusion for 1 week may support viability of human livers, although testing with higher-quality livers and transplantation of perfused livers into recipients will be required to fully assess the potential of our approach,” wrote the authors in the study.

In addition to restoring livers that would otherwise be discarded, the new technique opens up other new possibilities, such as transporting organs across long distances. An incredible possibility proposed by the researchers is to take a donated liver, break it up into several pieces, and regrow them in the perfusion machine. If feasible, this could double or possibly even triple the number of livers available for transplant, according to the paper.

It’s definitely a cool new breakthrough, and hopefully human transplants will happen soon. In the meantime, you can help the ongoing organ donor shortage by becoming a donor yourself.