New details have emerged about the US Pentagon’s ambitious plan to build seven different defence constellations, the first of which will include hundreds of surveillance satellites that are expected to attain full global coverage in just six years.

Known as the National Defense Space Architecture (NDSA), it’s the first major initiative from the newly hatched Space Development Agency (SDA), a part of the US Department of Defense.

Once it’s built, the NDSA will consist of seven constellations, or “layers” in the parlance of the US military. Each layer will perform a different function, such as detecting incoming missiles, alerting ground forces of potential threats, keeping tabs on potentially hostile weapons systems, and augmenting navigational capabilities, among other important defence roles.

Launched in March 2019, the SDA is “responsible for unifying and integrating [the Department of Defense’s] space development efforts, monitoring the department’s threat-driven future space architecture and accelerating the fielding of new military space capabilities necessary to ensure US technological and military advantages in space,” according to a press release from the DoD. The agency is on track to become part of the US Space Force in 2022. 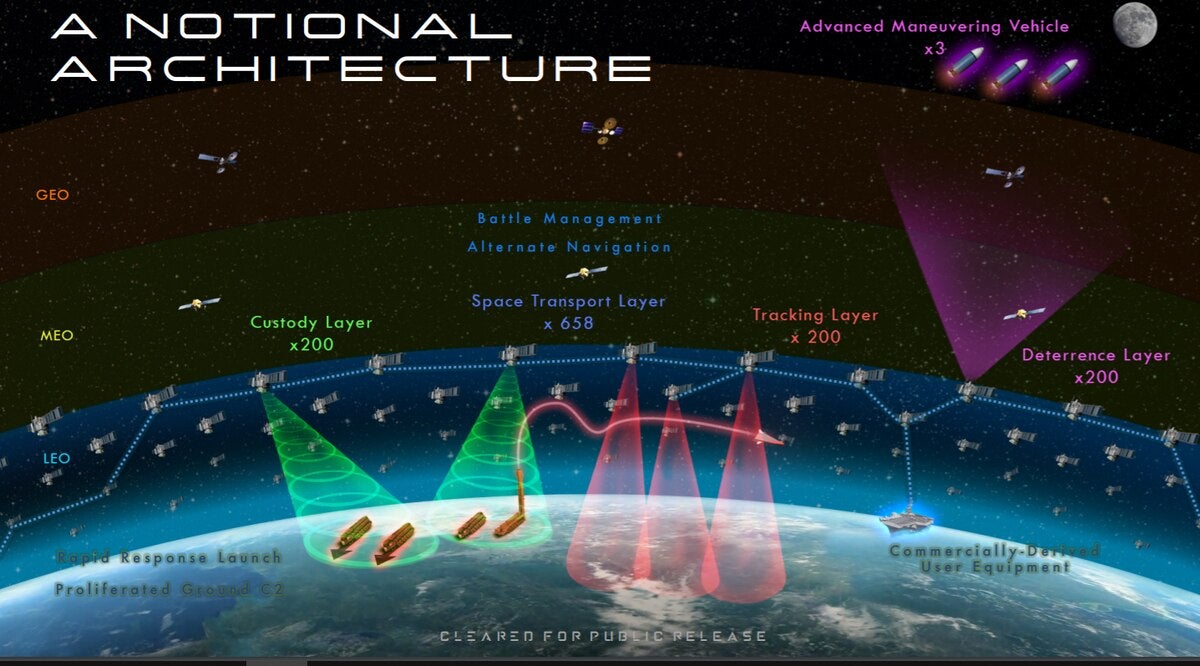 Speaking at a Pentagon briefing on Tuesday, Derek Tournear, who was appointed director of the SDA in October 2019, said the first of these layers, the Transport Layer, will consist of several dozen satellites by the end of 2022, reported SpaceNews. Once at this early threshold, the system will “show that we can operate a proliferated constellation and that the constellation can talk to weapon systems,” said Tournear.

So in two years, the Transport Layer should be capable of pinpointing targets on the ground or at sea and tracking advanced missiles. Eventually, this initial constellation will consist of hundreds of satellites, and the entire NDSA system will involve thousands of satellites, according to SpaceNews. That’s a lot, but it’s a far cry from SpaceX’s Starlink megaconstellation, which could reach upwards of 45,000 satellites. Still, Low Earth Orbit is quickly becoming a very cluttered space.

The Pentagon is planning to launch dozens of satellites in two-year increments, with the Transport Layer achieving regional coverage in 2024 and full global coverage in 2026, according to Tournear. The plan will require the construction of one new satellite each week, reports Defense One. Tournear said each satellite will be relatively small, weighing a “few hundred kilograms,” costing around $10 million (£7.6 million) each, and having a life expectancy of around five years, as reported by Defense One.

These specifications point to the goal of rapid, steady, and ongoing satellite deployments. Ideally, Tournear wants to commission new satellites and place them in orbit within an 18-to-24 month timespan. To that end, the SDA issued a broad agency announcement (BAA) yesterday, in which the agency is asking for new ideas to assist with these rapid and affordable satellite implementations.

Ultimately, the seven pending NDSA constellations are meant to enhance the US military’s ability to detect and knock out airborne threats, such as surface-to-air and hypersonic missiles. The system will coordinate with ground-based systems, which would in turn deploy the required countermeasures. In its BAA, the DoD described the seven defense layers as follows:

The Pentagon will be looking to commercial partners to help develop these technologies. To that end, the SDA will be soliciting bids for the first batch of satellites in late spring 2020 and awarding contracts in the summer.