CES 2020: Quibi Is Either a Clever Gimmick or the Future of Entertainment

Quibi is either going to be brilliant and influential to how we consume media, or we’re going to watch Hollywood and Silicon Valley shit the bed in a way that's just not common in 2020.

The new streaming service, dreamed up by Jeffrey Katzenberg, founder and CEO of Dreamworks and one of the architects behind Disney’s golden age in the early ‘90s, is a mobile-first platform delivering movies and TVs to your phone in 10-minute chunks. It can either be galaxy-brain goodness or incredibly stupid. Right now, I’m heavily leaning toward Quibi being good. The technology, at least, is extraordinary.

I should be clear that it was only after seeing a demo of Quibi in action that I started to feel this way. Heading into my meeting at CES, I was a lot more suspicious. Up until now, details about Quibi have been sparse and either uninspiring or downright bizarre. We know that it'll be confined to the US and Canada at launch, but no word about UK availability. In October, the LA Times confirmed that Quibi was partnering with T-Mobile, the third-largest mobile network in the US. Partnerships with a single carrier aren’t quite as common as they once wore, and partnering with the third-largest carrier sort of feel makes Quibi feel like a joke.

The name isn’t much better. Short for “quick bites,” Quibi sounds like a start-up you’re destined to forget in two months. Then there were the explanations for what Quibi was going to be. Katzenberg and his hand-picked CEO, former HP chief executive Meg Whitman, have spent a lot of time describing Quibi as entertainment for a younger and more phone-focused generation. No watching the content on your TV – or even your laptop. Phone only. They said it would be viewable in both landscape and the heinous portrait mode.

Then there was the huge list of shows reportedly coming to Quibi. Over 175 at this point. Which is – well, way more than Apple or Disney+ launched in their first year. Quibi is spending over a billion dollars on content in 2020, but it’s all movies chopped up into 10-minute segments and shows designed to air 10 minutes at a time.

There was also this weird report that Steven Spielberg was making a show for the service. It would be a horror show, and it would only be available to watch at night – the content melting before your eyes as the sun came up. Potentially cool. But potentially weird.

The Spielberg show came up a few times as I discussed the service with Katzenberg and Whitman on Tuesday. Whitman made it clear that content on Quibi is intended to be viewed between around 7 in the morning and 7 at night. It’s not unwinding content, it’s little excursions when you’re grabbing lunch or taking the train to work. (All content will be available offline at launch, so train commuters, rejoice!)

“Steven sort of ignored the 7 a.m. to 7:00 p.m,” Whitman said with a laugh. Spielberg had heard about the service from Katzenberg and others and, according to Whitman, actually approached them – not the other way around.

“He came to us, and he said, ‘Listen, I want to do a show that you can only watch after dark. Because think about how scary it would be all to do it. Super scary show. And if it’s after dark, it’s gonna be even scarier.’”

According to Whitman, Quibi’s engineers told Spielberg that it was very possible to do a show tied to the times of sunrise and sunset according to the location of the user’s phone. “[B]ecause we know your phone knows exactly where you are. It knows exactly what time it is,” she said.

The phone has traditionally been the enemy in Hollywood. Step into a darkened cinema, and you’ll be told to turn it off. Katzenberg seems to envision the phone as the next big medium for entertainment. Instead of viewing it as a tiny TV we keep in our pockets, Katzenberg wants us to envision the phone as a whole new way to experience entertainment. So shows that can only be watched at night and bound to your phone’s GPU location. Or shows bound to the gyroscope in your phone – showing you a different version of the film based on orientation.

Director Catherine Hardwicke (she directed Thirteen! And Twilight!) told me Katzenberg’s vision is what appealed to her the most and that she’s found herself imagining even bigger and wilder possibilities. She told me a story about jogging along a bridge in Vietnam the week before, racing to catch a bus. As she ran past dozens of people taking selfies and capturing videos, she thought, “it’d be so neat to, like, fuck with everything, you know? And like to be able to sort of shove my footage onto their camera, interact with them.”

Something a lot of hackers would probably also find appealing!

But what Hardwicke was getting at was the appeal of just engaging with a (willing and eager) audience in very different ways than filmmakers traditionally have.

Which, I will admit, sounds like something folks say after a bong rip. Yet when Quibi CPO Tom Conrad and CTO Rob Post sat me down to show me the new kind of videos being made for Quibi, I found myself... kind of falling for the hype.

Everyone I spoke with calls the videos “turnstyle,” and they’re a little different from what you’d expect. When content is viewed in landscape mode, it behaves just like videos you watch on Netflix or YouTube. Yet, when you turn the phone around to portrait orientation, something very cool happens. Instead of the landscape video shrinking down into a postage stamp at the top of your screen, or cropping down to just the centre of the video, you get a whole new video. Everything seems to reorient so you’re watching the same story but in a completely different perspective.

For example, in Catherine Hardwicke’s new show, Don’t Look Deeper, the portrait mode version provides a much more intimate experience, with close-ups of the actors and a focus on expressions rather than actions. Flipping to landscape mode reveals more of the action and gives you that sense of scope you’ve come to expect from really wide shots.

Hardwicke’s approach isn’t the only way of doing it. Director Zach Wechter said he was eager to experiment with the platform, and in his short Nest, the landscape version of the film is a traditional horror film about a woman being stalked in her own home and watching the intruder through her Nest cameras. But turn the phone to portrait mode and instead you have a view of her phone. So you see the grainy Nest cam footage or watch as she jumps out of the app and opens Facetime to call her dad in terror.

What’s happening is Quibi has not one but two versions of the film bound to one soundtrack. One version is edited in landscape mode and the other in portrait mode, and the idea is the app seamlessly switches between the two, allowing you to control how you experience the story. Done right, it could create a far more immersive and interactive experience than you’d normally expect from narrative content on a phone.

It’s both positively gimmicky and absolutely cool, and I kind of hate myself for how into it I am. 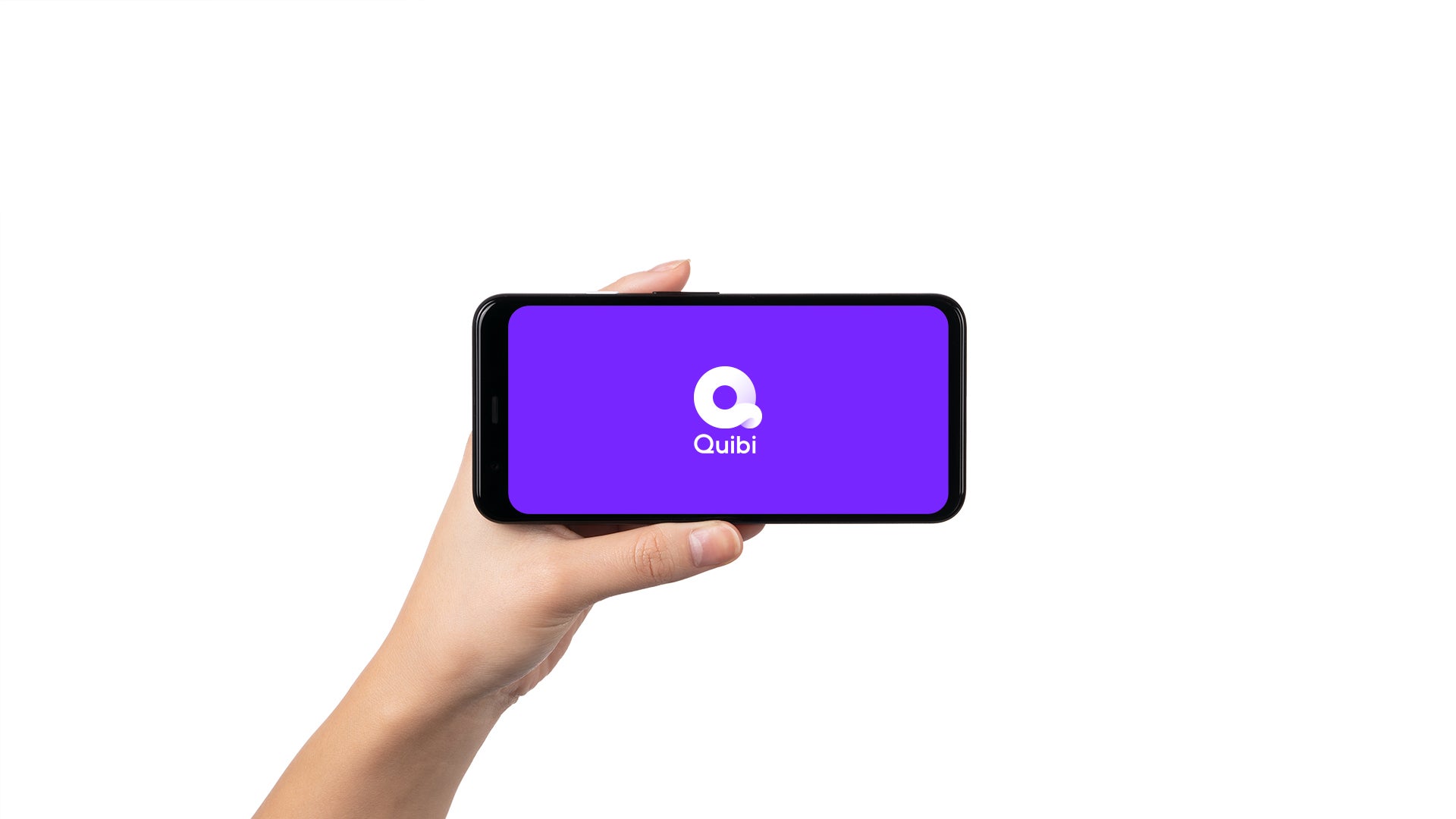 Quibi’s Post says it was a challenge to create the tech that allows Quibi to deliver the turnstyle videos because you have to supply not one, but two streams concurrently and then switch between them without hiccups. “[W]hen Tom [Conrad] and the designers first came to me with this, and they showed it to me, like, my heart skipped a beat because I’ve been streaming video for over 10 years. Immediately, I know, ‘oh, I’m in trouble.’”

For Post, the challenge was building out technology to support it all, and he thinks they’ve done it. The tech that allows the concurrent streams and quick switching between them is “the foundation of our patent portfolio,” he said. It helps that the videos he has to deliver don’t need to be as large or high-quality as what’s found on Netflix. Quibi won’t be delivering 4K video to phones that don’t even have 4K screens, and while HDR could be supported in the future, it isn’t now. “We want to future-proof ourselves,” Post told me, after noting that they’re still shooting everything in the highest quality and will be able to deliver better-looking versions of the content as phones improve.

But crucially, future-proofing means ignoring TV sets altogether. And laptops. There’s no browser app or Roku app. For everyone at Quibi, the first and only venue for their content is the phone. This means if we all move to smart watches or AR glasses by 2040, Quibi will be screwed if it doesn’t innovate. Whitman and Katzenberg seem optimistic that phones will stick around for a while.

And I... I’m starting to feel actually pretty optimistic about Quibi. Maybe. The service launches 6 April 2020 in the US and Canada, on both iOS and Android. The ad-supported version will cost $5 (£3.83) a month, while the ad-free version will cost $8 (£6.13) a month. Quibi plans to release one chapter of a movie, five episodes of shows, and 25 “Daily Essentials” clips featuring news and sports every day. All told, about three hours of new content per day, 52 weeks a year.

Between now and April, a lot will still need to happen for me to truly believe in Quibi. For one thing, we still don’t know what the app looks like. The footage I saw was all on a test application intended for demos. But after just one demo, I think Quibi at least deserves a shot.