When Lenovo first teased its foldable PC back in May it clearly needed a bit more work – even if it showed a lot of promise. Six months later at CES 2020, Lenovo is ready to debut the world’s first foldable PC and it’s slick as hell.

Now I know what you’re saying, aren’t all laptops foldable? Well yes, but not like this they aren’t. Sporting an LG-made 13.3-inch flexible plastic OLED display, the ThinkPad X1 Fold is the first of its kind. Lacking a traditional built-in keyboard or touchpad and featuring a chassis that’s more like a tablet than a standard clamshell, it’s almost like Lenovo deconstructed the essence of a laptop and then reimagined how they would work on the X1 Fold.

To get the most out of the X1 Fold’s screen, you’ll want to use it in landscape mode, either propped up by its built-in folding kickstand, or while resting on Lenovo’s Fold Stand (designed to keep every port accessible in landscape mode). From there, you can simply grab the system’s included Bluetooth keyboard, transforming the X1 Fold into a portable all-in-one of sorts.

Here are all of the X1 Fold’s various components, including the optional stand (sold separately). (Photo: Sam Rutherford/Gizmodo)

In person, the X1 Fold’s OLED screen is bright and quite colourful. (Photo: Sam Rutherford/Gizmodo)

When you want something a bit more compact, you can turn the X1 Fold sideways and bend it in half to create a very portable mini laptop. (Photo: Sam Rutherford/Gizmodo)

Lenovo placed the X1 Fold’s two USB-C ports so that at least one would always be available, no matter how it’s positioned. (Photo: Sam Rutherford/Gizmodo)

The built-in kickstand is simple but effective. (Photo: Sam Rutherford/Gizmodo)

The keys on the magnetic keyboard are a bit shallow, though the size of that touchpad will probably be a much bigger annoyance. (Photo: Sam Rutherford/Gizmodo)

The optional stand is a bit clunky to carry around, but provides even more ways to fully utilise the X1 Fold’s design. (Photo: Sam Rutherford/Gizmodo)

Because the X1 Fold’s screen is plastic, writing on it with a stylus feels more like paper than a normal tablet with a glass screen. (Photo: Sam Rutherford/Gizmodo)

But when you want something a bit more compact, you can rotate the X1 Fold, bend it in half, and suddenly, you have a super portable laptop that can switch between Windows 10's on-screen keyboard, or the X1 Fold’s magnetic keyboard just by placing the BT keyboard on the bottom half of the display.

And regardless of what mode it’s in, the X1 Fold also supports full stylus input and Windows Inking integration, which could make it easy to whip up an impromptu sketch or quickly annotate a PDF or two. The pre-production unit we tested out didn’t have a functioning stylus, but Gizmodo's Therese McPherson found it very pleasant to draw on thanks to the slight give found in the POLED display versus a traditional one covered in a sheet of glass.

But perhaps the most interesting thing Lenovo created for the X1 Fold is its Mode Switcher app, which is designed to improve multitasking, as Windows 10 Pro (which is the OS the comes pre-installed), wasn’t really built to accommodate laptops with dynamic foldable screens. Down the line, Lenovo says that it will update the X1 Fold to work with Windows 10X, the unreleased OS Microsoft has built for its own folding tablets. Only there’s no telling when that’ll happen as even Microsoft hasn’t said when 10X is expected to be ready. 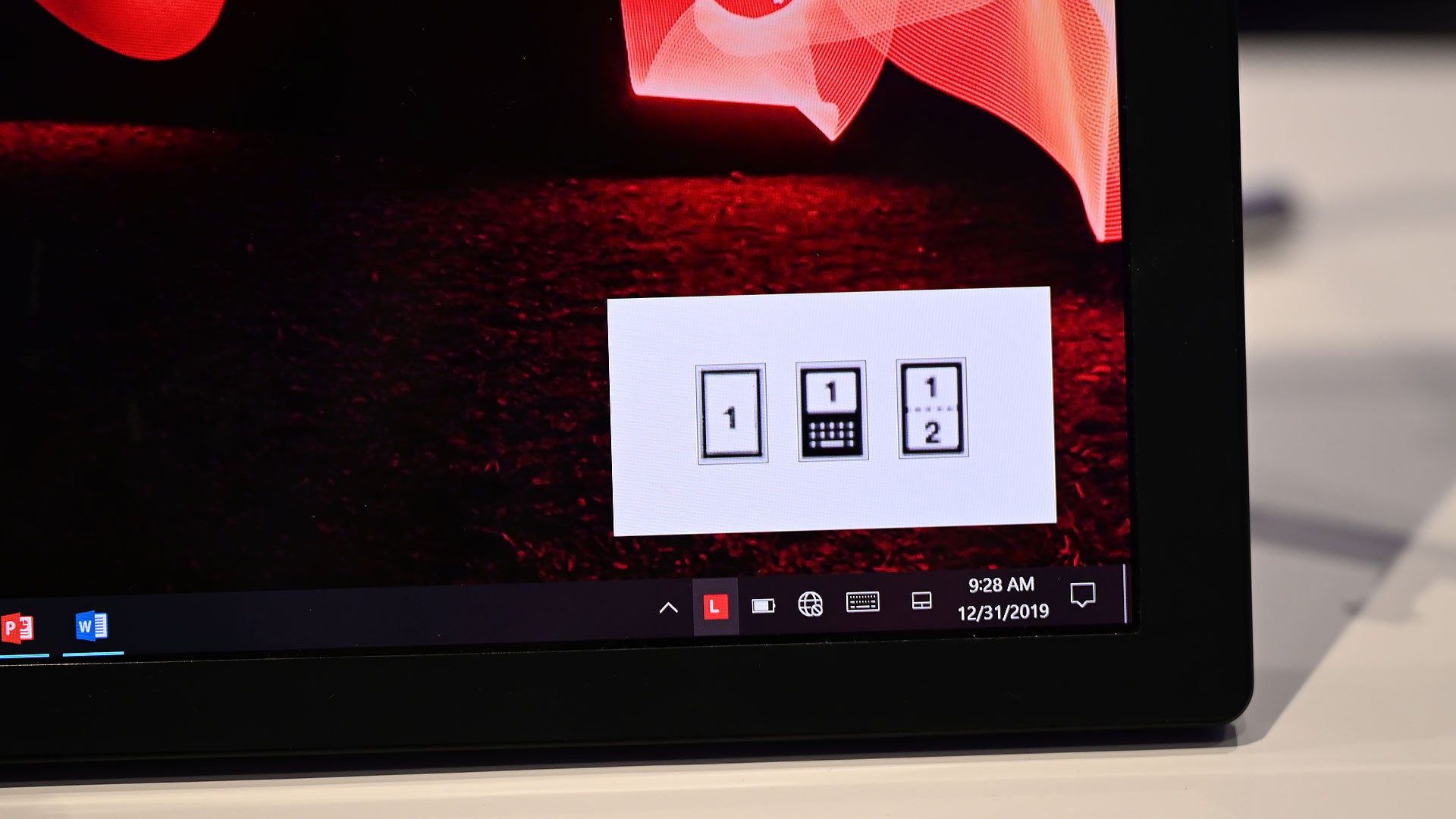 Meanwhile, in order to alleviate concerns about the X1 Fold’s durability, Lenovo claims this system has passed the same battery of mil-spec 810G tests that every other member of the ThinkPad family has to deal with, including all the usual drop tests. So it should be more durable than you’d expect a device like this to be.

Additionally, Lenovo says the X1 Fold’s screen is made up of six different layers that add increased rigidity, so despite the front of the screen still being plastic, Lenovo claims it has a hardness 6H, which should be able to resist scratches from things like its included stylus, fingernails, and other everyday hazards.

In fact, if you look closely at the X1 Fold, you’ll notice a lot of little design features meant to help keep its flexible screen in prime condition. Instead of a normal plastic or metal bezels, the X1 Fold features a silicone border that runs along the edge of its display, which allows the screen to bend without creating gaps that dust or dirt can easily get into. And on the back, the X1 Fold’s leather cover was designed to slide back and forth depending on how much the display gets bent, sort of like the dust jacket on a hardcover book. 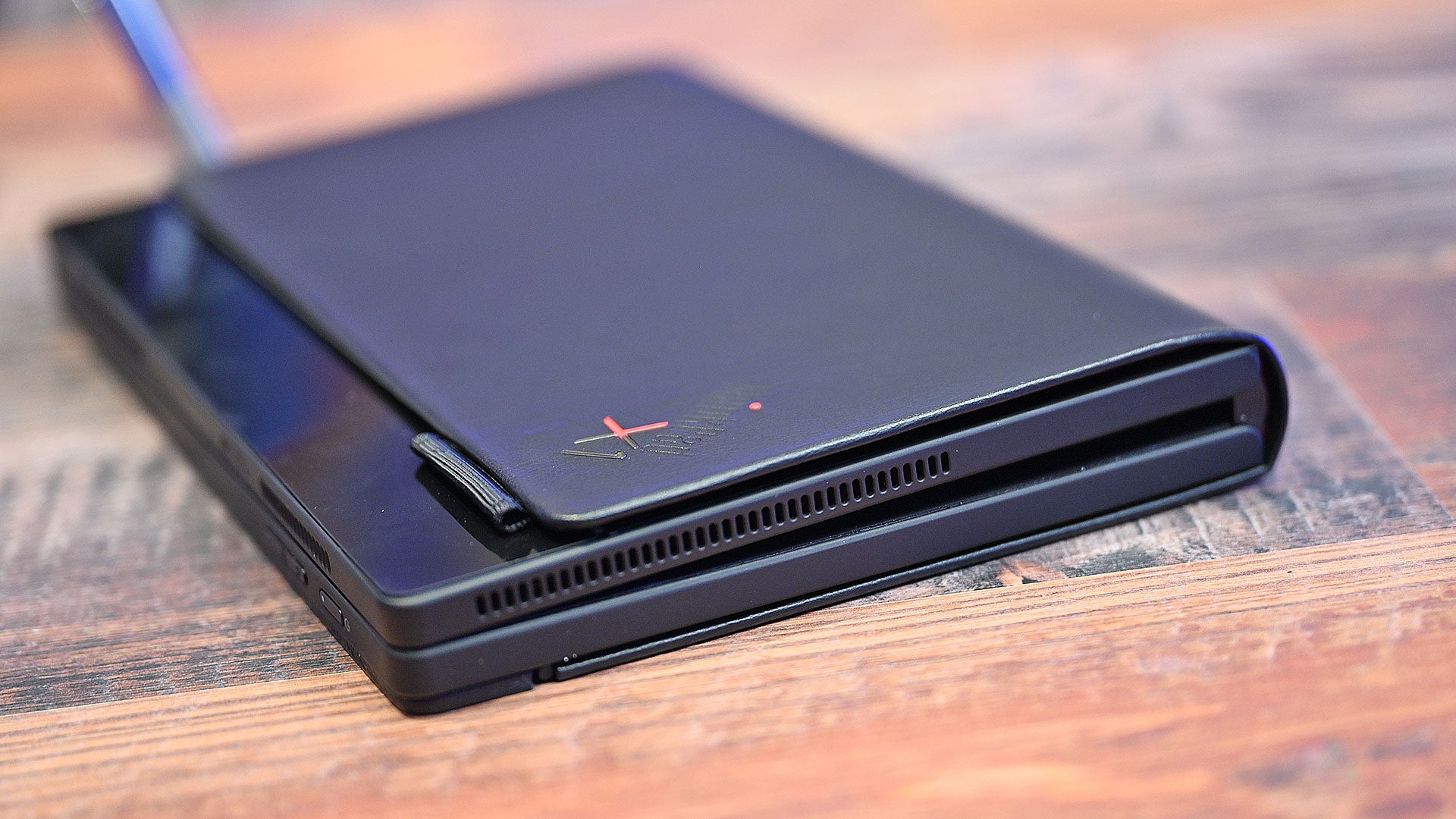 When closed normally, there’s a small gap between the X1 Fold’s halves to prevent the screen from creasing. (Photo: Sam Rutherford/Gizmodo)

When the X1 Fold is closed and viewed from the side, Lenovo intentionally left a small gap to prevent the X1 Fold’s screen from developing a crease like you get on Samsung’s Galaxy Fold. But then, in a real galaxy brain move, Lenovo designed the X1 Fold’s keyboard to fit perfectly within that gap, which not only makes everything super easy to carry, but also allows the X1 Fold to trickle charge the keyboard when it’s not in use.

And while Lenovo wouldn’t confirm what CPU the X1 Fold will have, we suspect it’ll feature one of Intel’s new 10nm 10th-gen Lakefield chips, which should offer a big power savings when the system is in standby without sacrificing much top-end performance. And when you combine that chip with up to 8GB of RAM, a 1TB SSD, and an optional 5G modem, the X1 Fold should have an easy time keeping up with its traditional clamshell siblings. Lenovo says the X1 Fold was made to deliver a full ultraportable laptop experience, and the specs certainly seem to back that up. 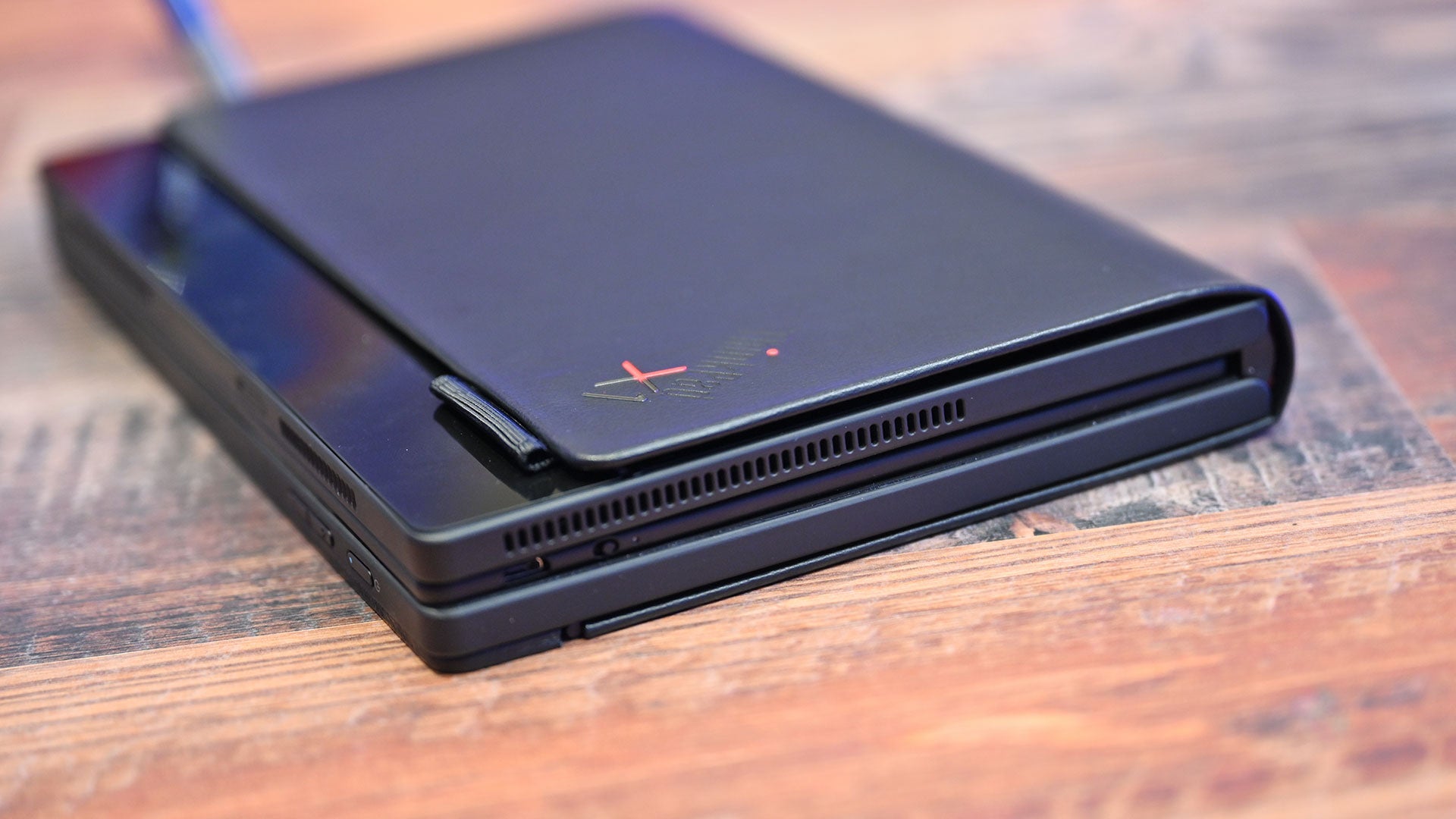 But Lenovo made good use of that gap by designing a magnetic BT keyboard that fits neatly within gap, allowing the keyboard to trickle charge when not in use (though it does have its own USB-C port for charging too). (Photo: Sam Rutherford/Gizmodo)

However, even with the X1 Fold’s ambitious design and promising specs, there are still a number of rough edges. Lenovo claims the X1 Fold’s battery life will last about 11 hours on a charge, which might be OK, except that manufacturer battery life estimates are always a bit generous.

But a bigger problem for the X1 Fold is the touchpad on its magnetic keyboard, which is comically small – though that might not be a big deal when its entire display is a flexible touchscreen. And with listed dimensions saying the X1 Fold measures 1.1 inches thick when fully closed, this thing isn’t exactly what you’d call slim. Oh, and did we mention that the ThinkPad X1 Fold is going to start at $2,500 (£1,899; UK pricing and availability TBA) when it goes on sale sometime in mid-2020? 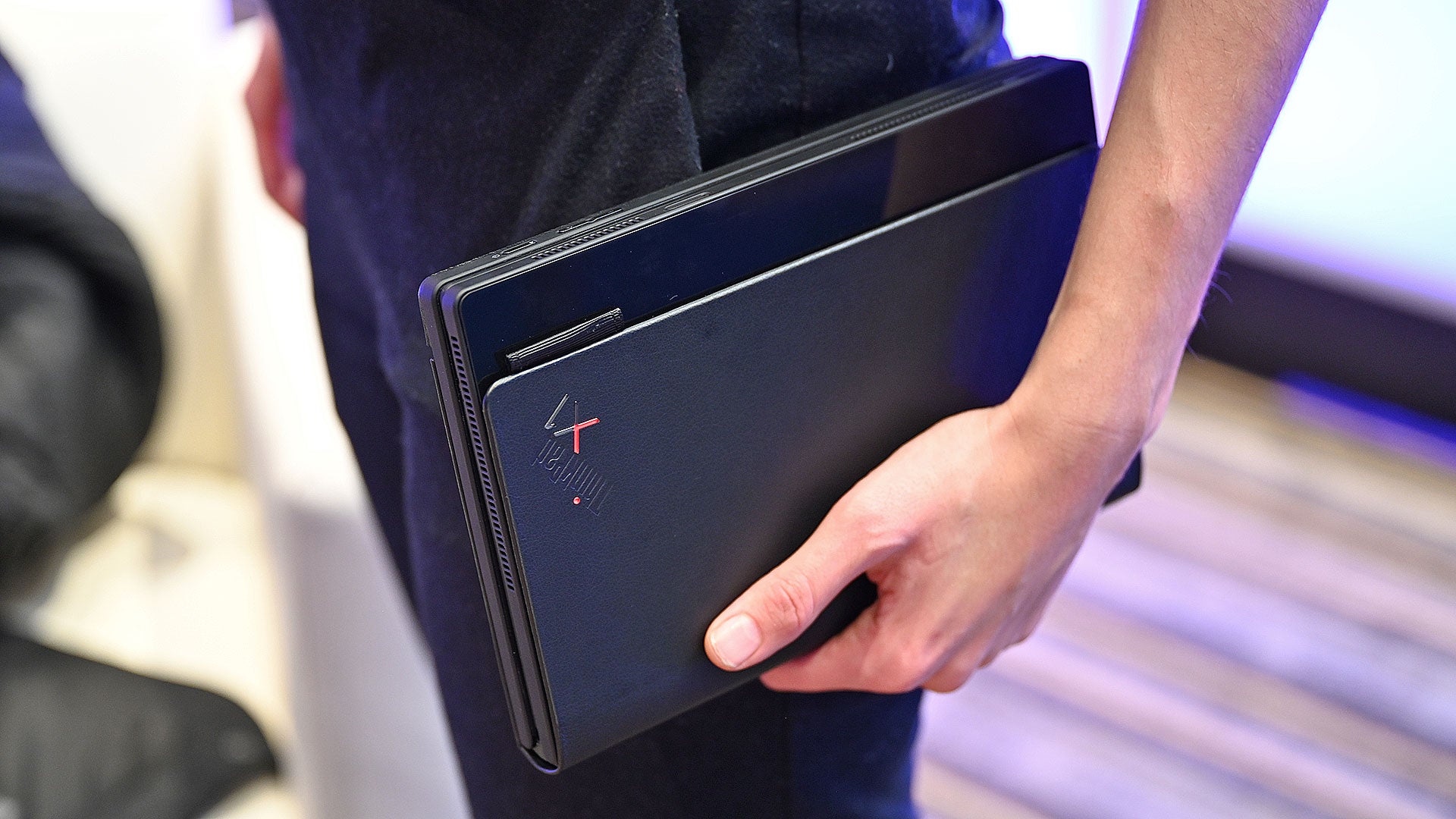 Despite being a bit on the thick side, in hand, there’s something that just feels natural about the X1 Fold’s dimensions and exterior leather cover. (Photo: Sam Rutherford/Gizmodo)

But honestly, when you consider that the X1 Fold is literally like no other laptop on the market, that price tag isn’t really that outrageous. Because after teasing people with a concept device a little more than six months ago, Lenovo actually went and made a laptop with a flexible OLED screen into a real thing that you’ll be able to buy pretty soon.

And that’s really the most important thing, because while Lenovo says it has buyers like hospitals, sales departments, and manufacturing companies interested in the X1 Fold, it’s hard to figure out this thing’s true potential until people have a chance to use it in the wild.