There are too many streaming platforms. The worst part of subscribing to so many services is having to memorise what shows are on what network and which platform. Is it the world’s most pressing problem? Hell no. That said, I was pretty impressed this CES by Dabby, a tablet-based streaming service search engine and subscription manager.

Dabby looks like a slightly thicker-than-average tablet with a kickstand. It connects to your TV via a dongle. It doesn’t sound all that cool, and I wasn’t entirely sure I’d understood what Dabby was supposed to do. But then I got the demo. All I had to do was press a button and ask Dabby to start playing the first episode of season one of Game of Thrones. The device took a few seconds to think, and then lo, it brought up the exact episode from HBO Now, HBO's US-exclusive streaming service, on the TV it was paired to.

That may not sound impressive for a show like Game of Thrones, which unless you’ve been living under a rock, you know it’s on HBO. But a few weeks ago, I decided to rewatch Friday Night Lights. While I knew it was an NBC show originally, I had no idea what platform it was currently on. Years ago, it was on Netflix – but it’s since been removed. After fussing with my TV remote, I eventually found it on Amazon Prime. The whole process wasn’t impossible, it was just more inconvenient than I would have liked. I recently also decided to watch Schitt’s Creek, but I couldn’t possibly tell you what service it was on without at least 10 minutes of searching or googling. Conversely, all I had to do was ask Dabby to “Play Schitt’s Creek” for it to pull up the series on the appropriate platform.

That’d be nifty on its own, but what impressed me was that Dabby can also search for specific scenes in any online video you have access to. Dabby’s spokesperson demoed the feature for me by saying, “Play the scene in A Few Good Men where Jack Nicholson says you can’t handle the truth!” And bam, a few seconds later I was watching that exact scene from YouTube on the TV. I had a feeling that was the prepared example they had for me, so I asked to try it myself. The results were mixed, but still pretty good. I asked Dabby to show me the scene where Leonardo DiCaprio dies in Titanic. What I got was a compilation video of every single Leonardo DiCaprio death from his entire filmography. Titanic was one of them, technically, but it wasn’t what I asked for. I tried again by asking for the “lightsaber fight scene in The Last Jedi” and that was more successful. I futzed around with Dabby for a bit, and while the AI it uses is better than you might think, you do still have to word your queries carefully. 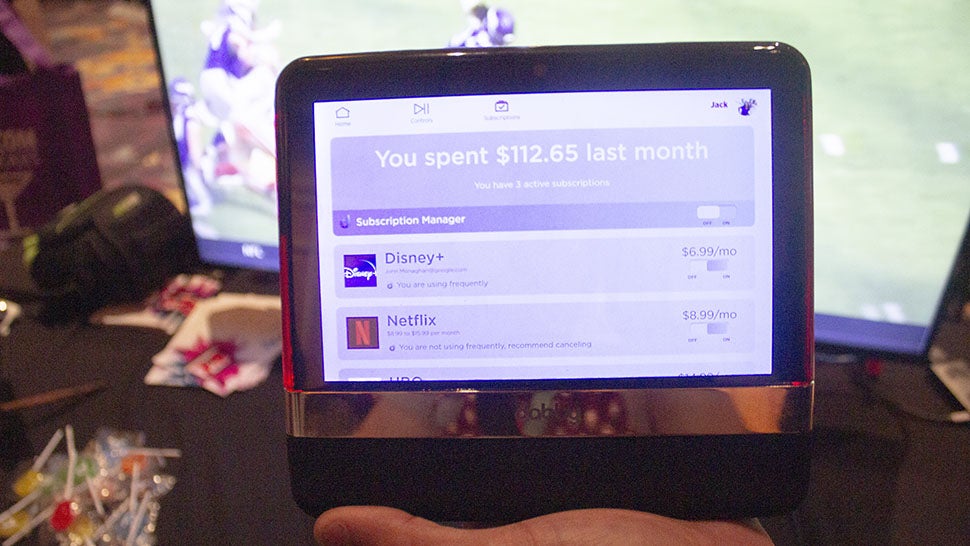 Half the reason I pay so much in subscriptions is because they’re a bitch to cancel. (Photo: Victoria Song/Gizmodo)

The search feature also works if, for whatever reason, you want to pull up content from social media like Instagram. The Dabby representative asked the device to pull up the NFL on Instagram – it worked. Though I imagine a more relevant real-life use case for people who don’t care about sport would be, say, watching the US presidential debates on YouTube.

The penny pincher in me, however, was most blown away by Dabby’s subscription manager. Essentially, it tracks which services you use the most and then also gives recommendations for which ones you should maybe pause or cancel. Then, to do so, you just have to flip a toggle on the screen and it’ll automatically do it for you. For a second, I basked in the idea of never having to email, call, or find the cancel subscription section of a streaming service website again.

None of this made me feel like I should run out onto the Strip, screaming that everyone should buy this product now. For starters, it won’t be available until Q2 this year, and even then it’ll cost $400 (£305) – more money than you’ll likely save in the short term by meticulously managing your subscriptions. That said, I did appreciate that it was a device that solved an actual problem I have. Personally, I hate navigating through smart TV apps or typing out show titles with my remote. I hate that a decent chunk of my brain is dedicated to remembering what shows are on what platform. Do I need Dabby? Nah. But after leaving Dabby’s booth, I found myself wishing something like Dabby was already automatically integrated into my TV.