Recent proposals by the UK Labour Party to nationalise the country’s cable broadband network prompted debate about the best way to make sure everyone has a fast home internet connection. Traditionally, governments have looked for ways to expand and upgrade their cable networks so that even remote communities have fast access. But with fifth-generation (5G) mobile technology now offering superfast internet speeds without the need for a fixed-line connection, could we one day do away with cables altogether?

A 5G network supports ultra-high-speed data rates of up to 10 Gbps, low latency or delay and can cope with up to a million devices per square kilometre. With 5G, you can download a typical high-definition movie in under 40 seconds, as opposed to more than seven minutes with 4G. In fact, 5G can let you smoothly play multiple HD videos, make 3D hologram phone calls, access virtual reality apps and enable driverless cars to communicate with each other and traffic infrastructure.

Unfortunately, 4G devices are not compatible with these networks and to access them you will need a 5G phone with higher processing power and larger memory capacity (12 GB or more), as well as things like 3D holographic projectors if you want to use those features. But for home access, you would just need a 5G router to connect to your existing devices.

Of course, the big challenge in replacing cable broadband with 5G would be putting the infrastructure in place. The UK’s superfast network (24 Mbps or higher) already reaches 96.4% of addresses, whereas 5G is available only in major cities such as London, Birmingham, Manchester, etc.

But to upgrade cable speeds to those offered by 5G would require connecting every house to the network with its own fibre. Enlarging the 5G network requires the installation of many more transmitters, themselves connected to the fibre network, but each can cover many homes. Because the two approaches involve very different infrastructure challenges, it’s very hard to compare the costs of each option. 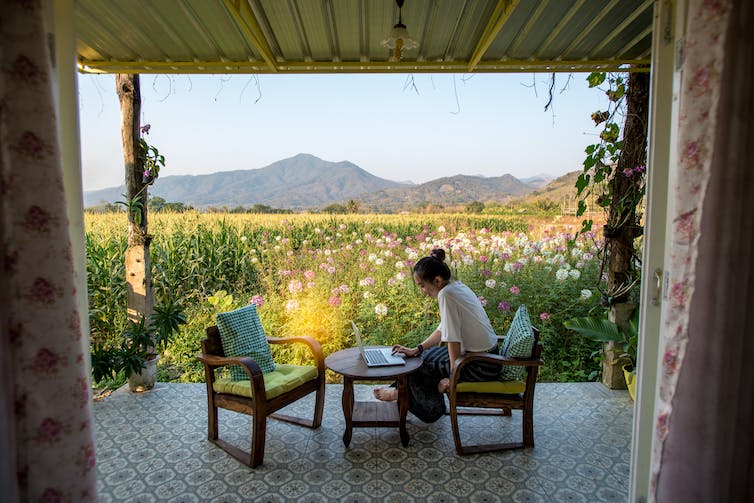 Connecting remote communities to 5G could be easier than laying cables. Theeraphong/Shutterstock

However, just putting the infrastructure in place isn’t enough. To compete with cable broadband providers or to replace the cable network, 5G needs to support similar data rates. And the typical or practical data rate of mobile networks is much lower than their theoretical data rates.

So, although 5G theoretically supports up to 10 Gbps, its practical data rate can be as low as 200 Mbps. While this would still support typical internet use, it might not be suitable for heavy users who stream multiple simultaneous videos or play high-speed online games.

Another challenge for mobile networks is guaranteeing a reliable service for customers because their signals can be affected by several factors such as distance from the transmitter, obstacles and interference from other devices. This is a major concern for businesses and people who often work from home.

But technology providers are developing ways to overcome this problem. For example, “massive MIMO” technology of 5G systems use as many as 96 antennas to create multiple simultaneous data connections between devices. “Edge computing” involves mobile towers doing more of their own data processing and storage, rather than relying on cloud data centres many miles away. These features make 5G a stronger candidate to eventually replace cable broadband.

A trickier obstacle to rolling out a complete, nationwide 5G network might be the political opposition from people worried that the technology might harm people’s health. There’s no evidence of any health effects from 5G, but convincing everyone that the technology is safe may be a challenge.

With all these barriers to full 5G adoption, it might not be possible to replace cable broadband with 5G broadband completely. But we might end up with a situation where heavy Internet users in major cities or businesses prefer cable broadband for a reliable, secure, high rate of data transfer, and remote or rural areas use 5G because it’s easier than connecting every house to the fibre network.