Dyson Improved On the Lamp Again, But Not the Price

By Andrew Liszewski  and Raul Alexander Marrero on at

Dyson has made a name for itself by meticulously designing products that typically far outperform its competitors’ offerings, but that extreme attention to detail and innovation often comes at a steep price. That’s the case with the company’s new Morph lamp: It manages to improve on Dyson’s Lightcycle lamp in many important ways, but with a price tag that starts at £500, it remains one of the company’s hardest sells.

When we reviewed the Dyson Lightcycle lamp (the predecessor to the new Morph lamp) last April, we walked away suitably impressed with what is still one of the most technologically advanced lighting products available to consumers. Using a set of LEDs that are continuously cooled with a passive copper tube heatsink that itself is remarkably innovative, the Lightcycle promised consistent colour temperatures designed to match the natural outdoor lighting of wherever you happened to be using it on Earth.

It worked, but the benefits of the Lightcycle’s real-time colour temperature tuning weren’t as immediately obvious as Dyson’s other products, which include vacuums that instantly leave your carpets looking cleaner, or the Supersonic that dries even long hair in just a few minutes. It’s easier to justify spending £300 on a hair dryer or £600 on a vacuum cleaner when a consumer can immediately see the benefits the first time they use it.

As beautiful as the engineering behind the original Lightcycle was, its design, specifically a sliding horizontal arm used to adjust the position of the light, actually restricted where it could be used. Placing the lamp close to a wall limited the movements of that sliding arm, and we found that trying to use it on a side table next to a bed, where the colour temperature settings would potentially be most useful, was almost impossible.

That was one of our major complaints with the Lightcycle, and it’s the most obvious improvement Dyson has made on the new Lightcycle Morph. The sliding arm has been replaced with a multi-segmented arm that can pivot 360-degrees both in the middle and where it connects to the lamp’s vertical support. It’s a small change, but one that makes it a lot easier to position the Morph’s LEDs exactly where you need them. The update also means the Lightcycle Morph can be placed right up against a wall while still allowing its LEDs to be repositioned almost anywhere the articulated arm can reach.

The Morph also gains a rotating head, allowing the LEDs to be pointed at the wall or ceiling, not just onto a work surface. (GIF: Raul Marrero/Gizmodo)

Another useful improvement to the Lightcycle Morph is that the LED head can be rotated 360 degrees, allowing the light to be shined on walls and even the ceiling. The LEDs on the original Lightcycle could only shine straight down, since it was specifically designed as a task lamp to illuminate a work area, or an object someone was holding. By comparison, the Morph is far more useful as a tool for illuminating an entire room, and its new design better positions the lamp as a decor piece instead of a lighting tool. That being said, the Morph no longer allows you to raise or lower the LEDs; their height remains fixed. Being able to make vertical adjustments was admittedly a useful feature on the original Lightcycle, so Dyson will be keeping it around and positioning it specifically as a task lamp.

With the articulated arm folded back on itself, the Morph’s LEDs illuminate its vertical support, creating a soft glow that fills a space with diffused lighting. There’s also a plastic shroud that cleverly pops up once the lamp’s head magnetically locks into place, minimising light leak. (Featured image: Raul Marrero/Gizmodo)

This improved usefulness and versatility is also demonstrated by the Morph’s most innovative new trick. With the arm folded back on itself, the LED head shines down into the lamp’s vertical support (made from a perforated metal tube lined with a durable plastic) creating a soft glow that will fill a room with diffuse ambient light. The intensity of the LEDs on both the Lightcycle and the new Morph are completely adjustable using a mobile app or touch-sensitive sliders on the lamp itself, but this new feature makes the Morph a much better choice in places like bedrooms where the direct light from the LEDs can be a bit too harsh when waking up or trying to wind down at the end of the day. 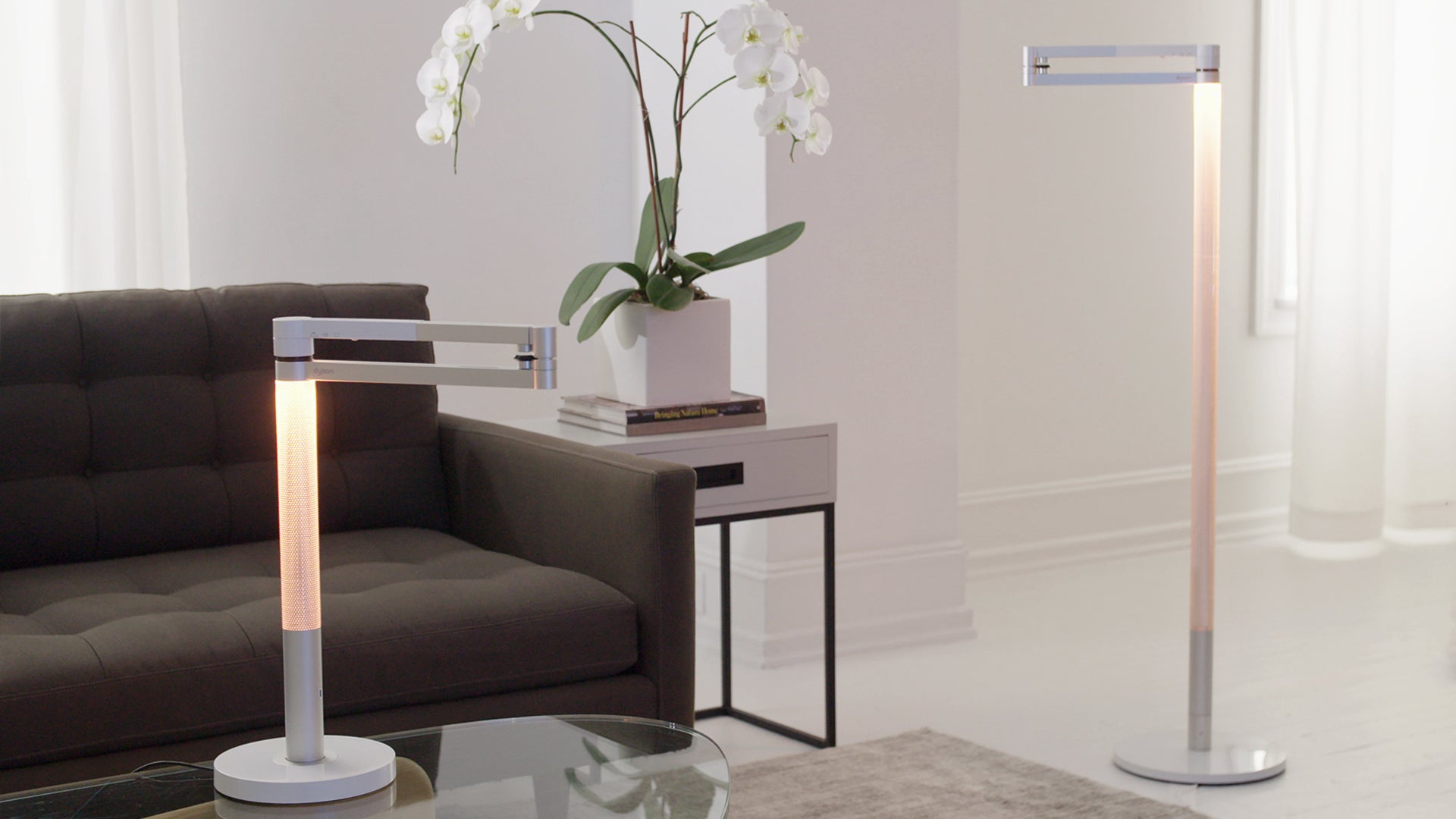 The physical design of the new Dyson Lightcycle Morph is really the only thing that sets it apart from the previous Lightcycle lamp. On a technical level, it carries over all the same features of its predecessor. App connectivity allows users to specify their age and location so that the lamp can make automatic adjustments to the intensity and colour temperature of the LEDs. A motion sensor on the lamp itself lets you program it to automatically turn off and on as you leave or return to your workspace, and there are also touch-sensitive controls for manually adjusting brightness and the tint of the LEDs. Given the size of those physical controls, making precise adjustments is much easier through the mobile app.

The new Morph not only carries over the same steep pricing of the original Lightcycle, it’s actually even more expensive. The desk model will set you back a hefty £500 while the floor standing model is an additional £150, with three different colour options to choose from. There is no doubt a lot of effort and attention to detail that went into the creation of the Morph. Dyson fixed many of the functional complaints we had with the Lightcycle on the new version, and from our initial hands-on, there’s zero doubt we would recommend the Morph over its predecessor. But a lot of the functionality can be replicated by screwing a smart bulb into one of the many lamps already around your home, so while the Dyson Lightcycle Morph is a lovely piece of tech, ultimately you might be still better off upgrading something from IKEA instead.