When we talk about Facebook’s myriad foibles and fuckups, we’re usually laying the blame on things that happen within the Big Blue App, or, increasingly, the social network’s CEO. What’s less discussed are the company’s ties to the potentially millions of sites and services using its software – but now, thankfully, we can get a window into that for ourselves. But don’t get too excited.

In a blog post yesterday, the famously privacy-conscious Mark Zuckerberg announced that – in honour of Data Privacy Day, which is apparently a thing – the official rollout of a long-awaited Off-Facebook Activity tool that allows Facebook users to monitor and manage the connections between Facebook profiles and their off-platform activity.

“To help shed more light on these practices that are common yet not always well understood, today we’re introducing a new way to view and control your off-Facebook activity,” Zuckerberg said in the post. “Off-Facebook Activity lets you see a summary of the apps and websites that send us information about your activity, and clear this information from your account if you want to.”

Zuck’s use of the phrases “control your off-Facebook activity” and “clear this information from your account” is kinda misleading—you’re not really controlling or clearing much of anything. By using this tool, you’re just telling Facebook to put the data it has on you into two separate buckets that are otherwise mixed together. Put another way, Facebook is offering a one-stop-shop to opt-out of any ties between the sites and services you peruse daily that have some sort of Facebook software installed and your own-platform activity on Facebook or Instagram.

The only thing you’re clearing is a connection Facebook made between its data and the data it gets from third parties, not the data itself. 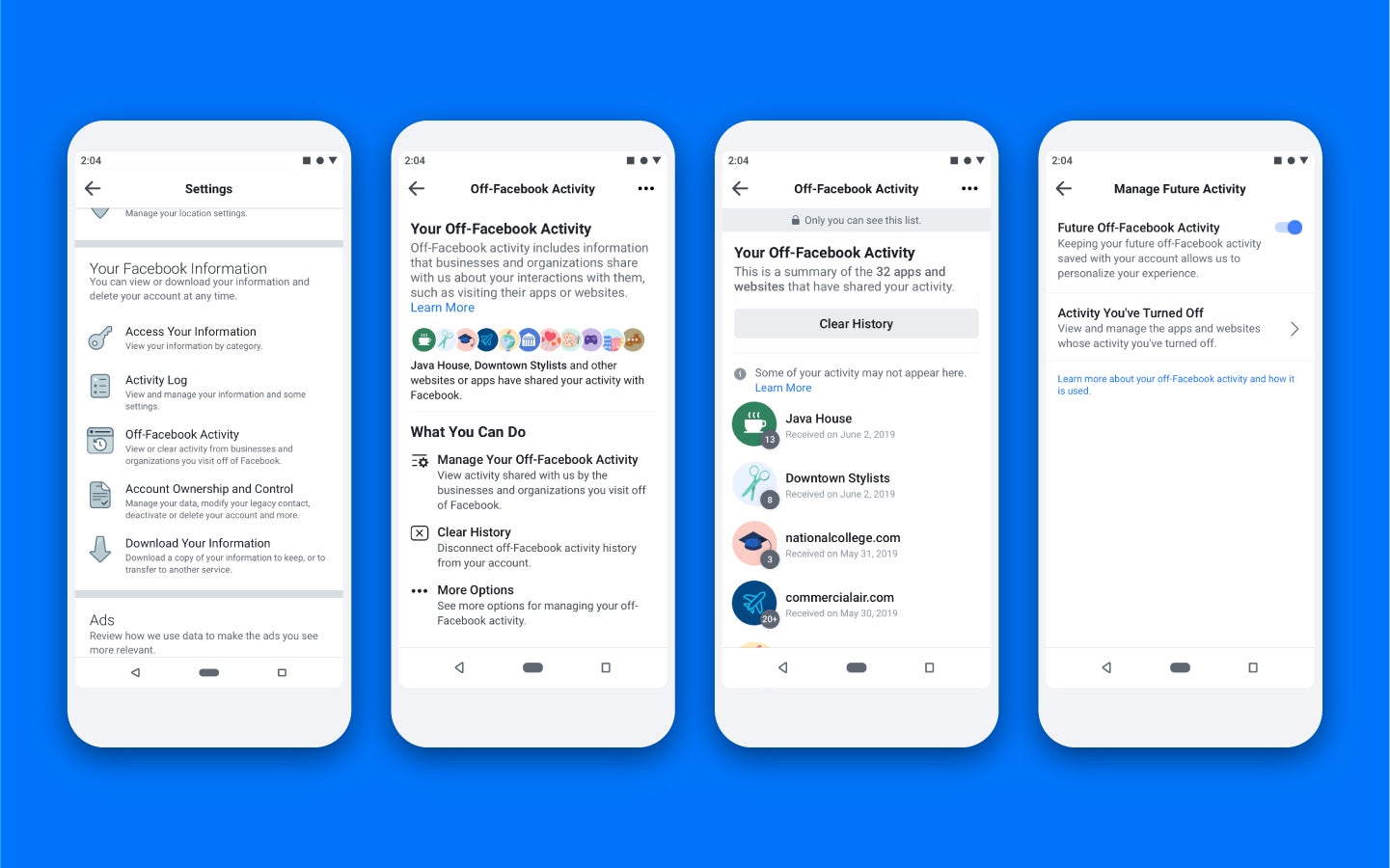 As an ad-tech reporter, my bread and butter involves downloading shit that does god-knows-what with your data, which is why I shouldn’t have been surprised that Facebook hoovered data from more 520 partners across the internet – either sites I’d visited or apps I’d downloaded. For Gizmodo alone, Facebook tracked “252 interactions” drawn from the handful of plug-ins our blog has installed. (To be clear, you’re going to run into these kinds of trackers e.v.e.r.y.w.h.e.r.e. – not just on our site.)

- Jane buys a pair of shoes from an online clothing and shoe store.

- The store shares Jane’s activity with us using our business tools.

- We receive Jane’s off-Facebook activity and we save it with her Facebook account. The activity is saved as “visited the Clothes and Shoes website” and “made a purchase”.

- Jane sees an ad on Facebook for a 10% off coupon on her next shoe or clothing purchase from the online store.

Here’s the catch, though: When I hit the handy “clear history” button that Facebook now provides, it won’t do jack shit to stop a given shoe store from sharing my data with Facebook – which explicitly laid this out for me when I hit that button:

Your activity history will be disconnected from your account. We’ll continue to receive your activity from the businesses and organisations you visit in the future.

Yes, it’s confusing. Baffling, really. But basically, Facebook has profiles on users and non-users alike. Those of you who have Facebook profiles can use the new tool to disconnect your Facebook data from the data the company receives from third parties. Facebook will still have that third-party-collected data and it will continue to collect more data, but that bucket of data won’t be connected to your Facebook identity. 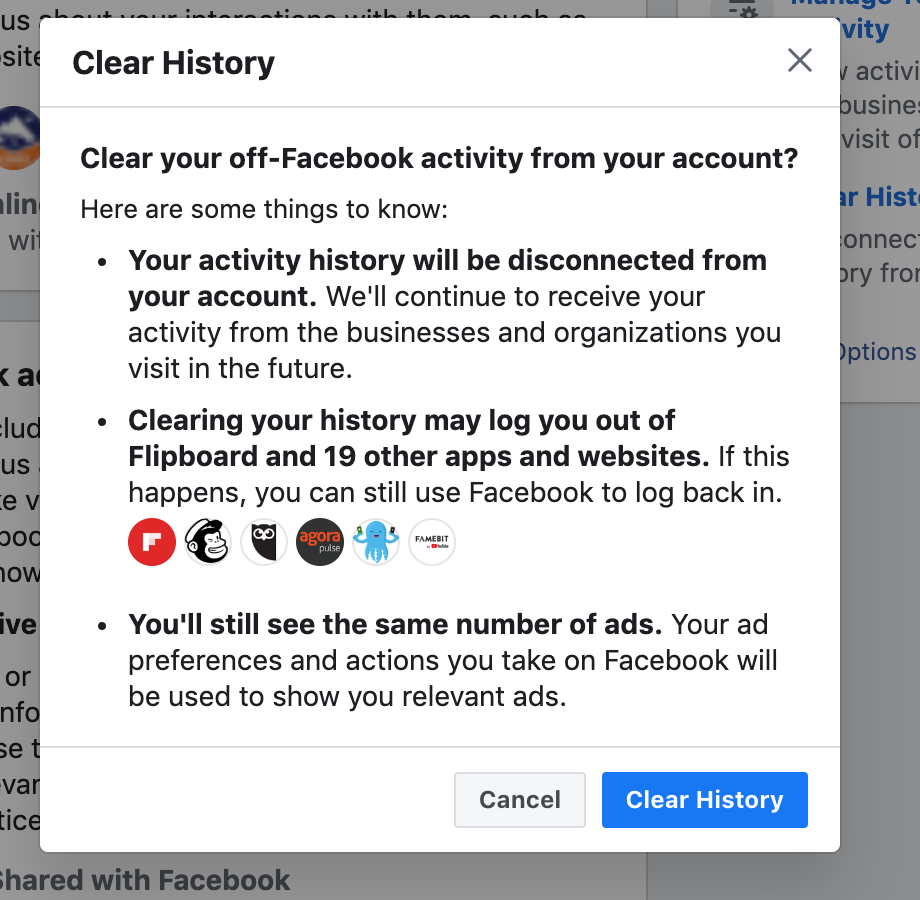 The data third parties collect about you technically isn’t Facebook’s responsibility, to begin with. If I buy a pair of new trainers, where that purchase or browsing data goes is ultimately in the retailer's metaphorical hands. And thanks to the wonders of targeted advertising, even the trainers I’m purchasing in-store aren’t safe from being added as a data point that can be tied to the collective profile Facebook’s gathered on me as a consumer. Naturally, it behooves whoever runs marketing there – or anywhere, really – to plug in as many of those data points as they possibly can.

For the record, I also tried toggling my off-Facebook activity to keep it from being linked to my account, but was told that, while the company would still be getting this information from third parties, it would just be “disconnected from [my] account.”

Put another way: The way I browse any number of sites and apps will ultimately still make its way to Facebook, and still be used for targeted advertising across... those sites and apps. Only now, my on-Facebook life – the cat groups I join, the statuses I comment on, the concerts I’m “interested” in (but never actually attend) – won’t be a part of that profile.

Or put another way: Facebook just announced that it still has its tentacles in every part of your life in a way that’s impossible to untangle yourself from. Now, it just doesn’t need the social network to do it.