Another CES and has come and gone, bringing us highlights like colour e-ink, a new type of Impossible Meat, and more foldable screen devices than we know what to do with. But before we close the book on CES 2020 for good, we’d like give a shout out to some of the oddities, stunts and observations from the show floor which, after all, are the real heart and soul of CES.

Typically, the saddest booth at CES is an empty booth, possibly littered with some scattered rubbish and maybe even featuring a random snoozing attendee or two. It’s a bit unfortunate, kind of daft, but mostly harmless. This year’s saddest booth has a slightly different aura. Not just sadness but also a strong whiff of desperation. 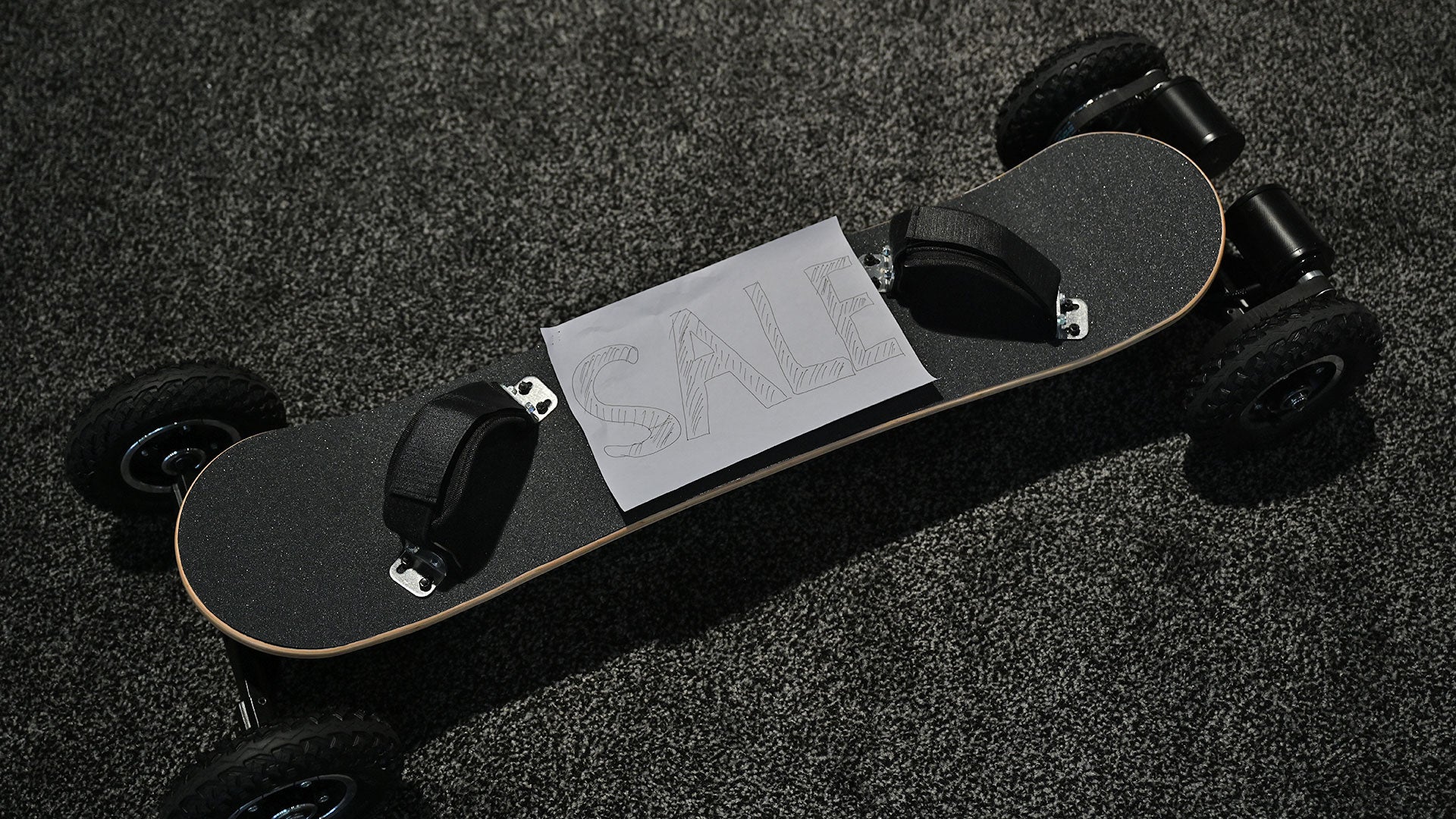 While booth #35060 did have a sign and even some carpet, there wasn’t much else going on. There wasn’t even anything displaying the name of the company. In front, the booth sported a lonely off-road skateboard that appeared to have been recently unboxed and left up for grabs. Furthermore, the skateboard didn’t even look like the one shown in the sign, and wasn’t battery-powered or smart, so we’re not sure why it was at CES in the first place.

The really desperate part about the booth came when I walked closer and noticed the Sale sign written by hand on a blank piece of paper. Then almost immediately, I was greeted by a man from a neighbouring booth with a card from Ogrand Industrial Limited saying I could have the skateboard today for $400. At that point, it felt like whoever was running the booth would rather let their skateboard go for a hefty discount than try to ship it back from wherever it came from, and that’s just sad.

Most Egregious Use of Streamers: Audi

Look, we get that CES is full of stunts and tricks designed to catch your eye but Audi’s booth this year was just too much. Instead of opting for sparkly lights or a smoke machine, Audi decided to drape its booth with thousands of streamers. And they weren’t just on the outside either, they broke up the booth in different sections, which made walking through feel like you were going through a car wash for humans.

Who even thought this would be a good idea? Are those streamers even recyclable? Because if not, Audi is destroying it’s eco-cred with a single trade show appearance. That said, since Audi’s parent company is VW – which is still trying to clear its name after its 2015 emissions scandal – maybe it just doesn’t care.

Nerds aren’t really known for their dancing abilities, so it’s probably no surprise that Doosan’s giant LCD exhibit/dance floor didn’t entice many attendees to strut their stuff. That’s sad because Doosan’s booth was huge and also sported displays built into its floors and walls that lit the whole thing up like a disco on the bridge of the USS Enterprise. There were even cameras mounted up high so you could see yourself dancing on the stage but, sadly, this booth seems like a lesson reminding people that just because you build it, that doesn’t mean people will show up.

Sadly, because of the wall right in front of the booth, there wasn’t even enough room for a proper slapshot.

I mean, just look at the picture, things don’t get much more stereotypical than this. You got a couple of lads in hockey jerseys standing next to a hockey goal in a red and white booth with a giant maple leaf hanging over their heads. You really can’t get much more Canadian than this. But upon further research, it turns out Phaneuf International are the makers of fully automated and self-propelled electric ice resurfacers (imagine if a Zamboni and Roomba had a baby) and a smart net that can move itself on and off the ice by itself. That’s mint.

As usual, the unspoken competition for the company with the thickest carpet at CES was strong again this year, with Central Hall boasting a number of front runners including TDK, Changhong, and last year’s winner, Haier. Even MobileEye put in a good show for all the car companies stationed further way in North Hall.

In the end, the booth with by far the softest, plushest and thickest carpet at CES 2020 was the Hisense booth. Sometimes, between meetings while running from place to place, I would go out of my way to walk through the Hisense booth just to give my feet a break. Honestly, the carpet at Hisense’s booth might even be softer than my mattress at home, which came from one of those online-only outlets that make foam mattresses designed for soft millennials like me, so props to Hisense for giving people’s feet a real treat this year.

Last year, Royole showed up to CES with the world’s first bendable phone. While the phone was pretty janky, this year Royole doubled down with a tree made from flexible OLED displays. Who the hell needs real trees with all their scratchy bark and leaves I have to rake up every autumn? Never mind that, this is CES, we’ll make our own trees with tech and when the planet runs out of oxygen we’ll just download our brains into robot bodies. Real trees are for mugs. 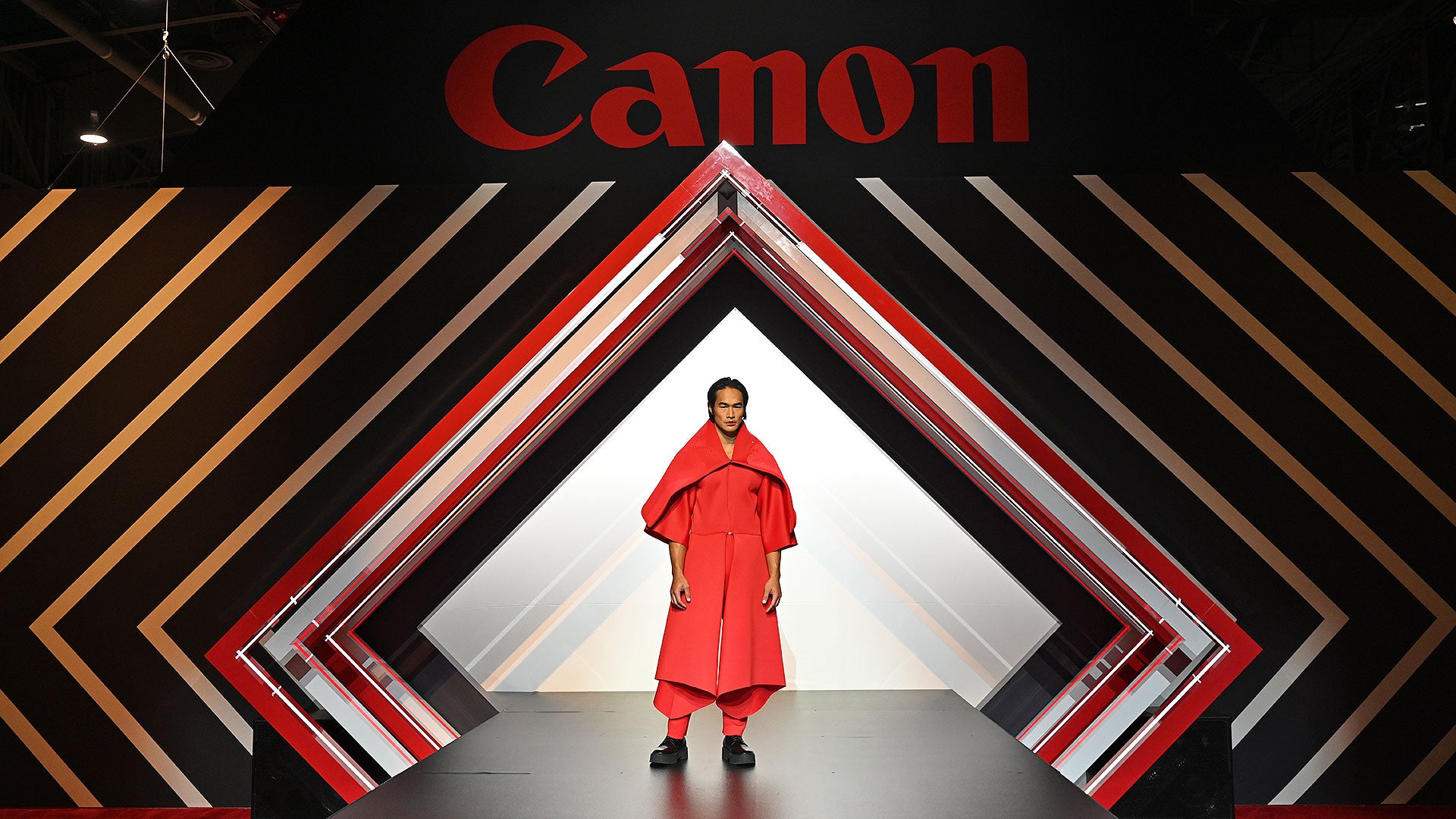 Along with dancing, nerds aren’t exactly known for their sartorial elegance either. That didn’t stop Canon from showing up with a runway complete with models and fancy haute-couture outfits. With the number of black TVs, stainless steel appliances and generic grey boxes on display at CES, it was nice having something vibrant and colourful to break up that monotony.

After announcing that it had partnered with over 400 police departments to help spread its network of video doorbells and other surveillance products, Ring decided to show up to CES with a bloody great house full of fuzz gear. While there weren’t any police roaming around the booth (at least not that we could tell), Ring was clearly still the biggest cop at CES.

Now everyone knows that all dogs are good dogs, but Kadja was being especially good when I found her taking a break on a carpet in Central Hall (smart dog, she must be a CES veteran). Even with thousands of people rushing around and loud noises coming from practically every booth, Kadja was calm, quiet and just happy to be there, and would perk up anytime someone stopped by to pet her. However, after a long week filled with lots of commotion, it seems like the thing she wanted to do the most was simply take a nap. Me too Kadja, me too.