While Pocket Monsters, the primary Pokémon anime, has already followed Ash Ketchum into Galar, the newest region where monsters from Pokémon Sword and Shield can be found, The Pokémon Company’s also just dropped Twilight Wings, a supplementary web series that more deeply explores the culture and lives of Galarian people.

Like the Pokémon movies and other miniseries, it’s unlikely that Twilight Wings is going to factor all that largely into the core anime’s plot, which is fine because these side stories have always been more focused on giving audiences a chance to experience the everyday world that Pokémon and their trainers exist within. Twilight Wings gets that bit right in a number of ways as we’re introduced to John, a sickly boy who has passion for Pokémon and dreams of one day being able to witness the Region’s Champion battle in person.

Unlike in other regions where gym battles are held in somewhat modest regions, Galar’s televised gym battles take place in massive stadiums where thousands come to cheer on their favourites, and even more people presumably watch the fights from home. Instead of flying around on the backs of their own personal Pokémon, people get around Galar with the use of Corviknight-powered flying taxis, which are essentially Ferris wheel cars carried by massive birds.

Little details like that give you an immediate sense of how different Galar is compared to other Regions like Kanto (Pokémon Red and Blue), Kalos (Pokemon X and Y), and Alola (Pokémon Sun and Moon). But one thing about Twilight Wings’ take on Galar feels decidedly...wrong.

Everyone’s speaking with an American accent.

While most of the fictional regions featured in earlier Pokémon games were inspired by real world geographical locations throughout Japan, all of the games since Black and White have taken place in regions inspired by Western countries. Black and White’s Unova region, for example, is essentially a reimagined New York City, X and Y’s Kalos is a stand-in for France, and Alola might as well be Hawaii.

Galar is the first Pokémon region to be based on the United Kingdom (Great Britain in particular), and Sword and Shield take quite a bit of care to remind you of this fact with the in-game dialogue and text. Other Pokémon games have alluded to the real-world places the regions are based on by having characters casually drop in words or phrases from the languages of those places here and there. It’s not uncommon for Kalos trainers to greet you with a “bonjour,” and people from Alola often say “alola” in the same way that Hawaiians might say “aloha.”

But there’s an argument to be made that the localisation team on Sword and Shield really laid it on thick with this generation because of the sheer number of Britishisms that Galarian people use throughout the game. One of the first things you can do after you begin playing the game is to look around your room and check out your brand new television. Only it isn’t a television, it’s a “telly” that your “mum” bought for you. 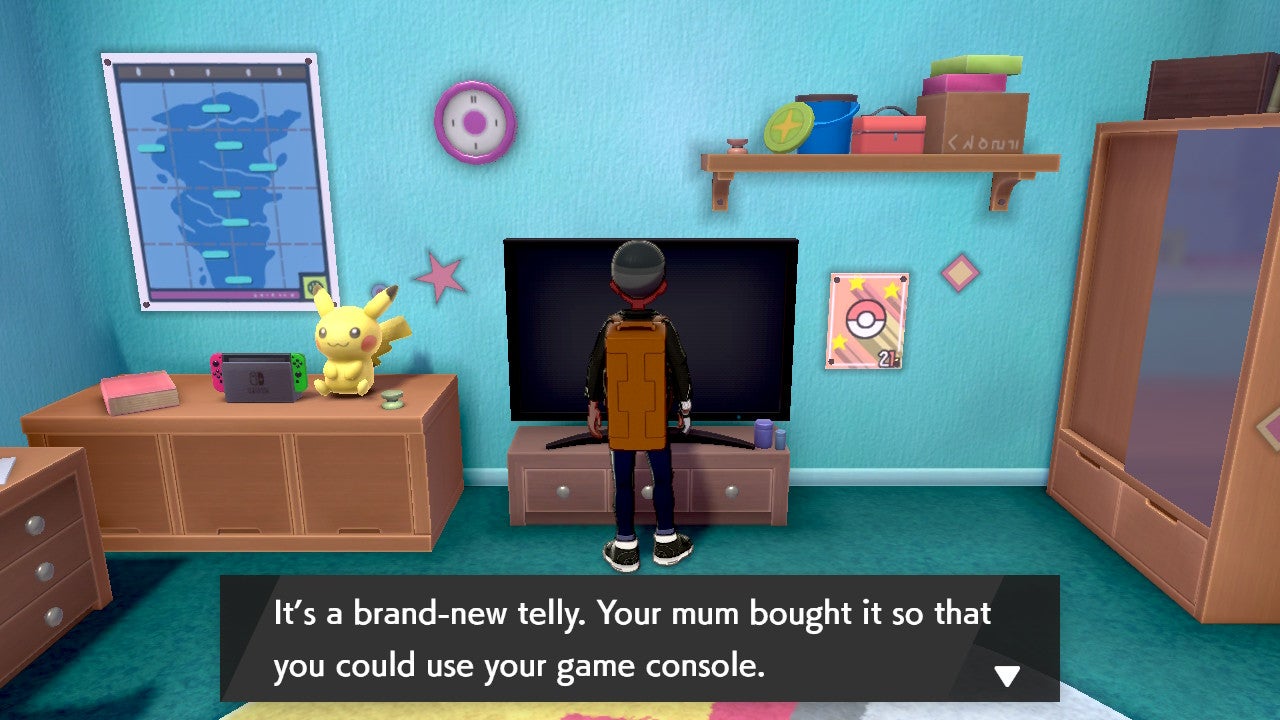 The telly wot me mum bought for me. (Image: Charles Pulliam-Moore/Nintendo)

Likewise, instead of something being good, it’s “bang-on.” They know British people also say “good,” right?

In context, it’s all perfectly easy to understand what everyone’s saying, but it’s also clear that while these people aren’t technically British, we’re meant to understand that their speech is filled with British colloquialisms, and the implication is that they’re all speaking with British accents. The weird thing about Pokémon: Twilight Wings, is that everyone in the English dub speaks with the most flat, American accents imaginable, and they’re jarring to hear given how decidedly British the games read otherwise.

If the first episode only featured entirely new characters who didn’t factor largely into Sword and Shield, that’d be one thing, but Chairman Rose, one of the game’s most central players, makes a sizeable appearance here and he also comes across as someone who’s never even heard of Marmite. Of course, there’s no hard and set rule stating that Galarians needed to speak with British accents, and Americans doing British accents can sometimes be an exercise in torture. But it’s hard not to hear Twilight Wings’ humans speaking and think to yourself “hmm...no, this just won’t do.”