This Casio Smartwatch Perfectly Illustrates the Struggles of Wear OS

The history of Wear OS watches is long, and mostly disappointing. Over the years, Qualcomm’s less-than-snappy Snapdragon Wear 2100 chip bore a decent chunk of the blame. The arrival of the 3100 was supposed to offset that, and it’s better sure – but not by a degree that offsets years of stunted development. Knowing all this, I wasn’t expecting much when mulling around a showcase of Casio watches a few weeks back. Until a proud spokesperson showed me the Pro Trek WSD-F21HR and said Casio designed its own processor for Wear OS.

It’s not unheard of for a company to design its own silicon. Apple does for the Watch, and so too does Samsung for its smartwatches. Huawei also designed its own processor for its Watch GT, opting to forgo the wait for the 3100 chip and therefore Wear OS completely. Now, Casio told me its decision to make its own processors wasn’t a dig at other suppliers; it was merely a strategic choice to keep all parts in house. Still, given that the rollout of 3100-powered watches was not only slow but also underwhelming, I was curious to see whether a proprietary chip would make a difference – or if Wear OS would always be mediocre regardless of hardware constraints.

What is it?: Beefy fitness watch that runs on Wear OS

Like: Speedy and accurate. Has GPS maps! Long (for Wear OS) battery life.

The reality is not that simple. When I booted up the Casio Pro Trek, it felt faster and more nimble as I swiped through screens. Just to be sure, I also booted up a Misfit Vapor X, which runs Qualcomm’s Snapdragon Wear 3100 chip. The difference in speed was minimal, though anecdotally I never once experienced lag with the Casio while navigating around Wear OS. Apps loaded quickly and the screen never stuttered as I swiped through various widgets. That’s something that still happens, though less frequently, with the 3100 watches I’ve played around with.

What was more noticeable was battery life. I wouldn’t call it long-lasting, but with regular usage, I got about 1.5 days off a single charge. Sometimes a little more. Logging exercises also didn’t seem to tax the battery too much – a roughly hour-long run only ate up about 8 per cent. On 3100-powered watches, I’m lucky if I get more than 20 hours. In both situations, I would need to charge nightly but with the Pro Trek, I could also still comfortably log a morning run if I forgot. Small difference, but one that I appreciate since a stupid portion of my life is dedicated to figuring out what watches needed to be charged when.

That’s important for the Pro Trek. If its name alone doesn’t tell you its meant to be an outdoor fitness watch, then the rugged design is a dead giveaway. It measures 2.4 by 2.3 by 0.7 inches, with a thickness of 0.8 inches. Wearing one sort of feels like having a tiny dinner plate on your wrist. This is not a watch I’d wear to a nice dinner, but then again it’s not meant for that type of everyday wear. The Pro Trek looks and feels like a GPS Garmin watch – right down to the part where you can see GPS maps of your current location from the wrist. That part is genuinely cool, as it’s not something you really see from Wear OS watches. For good reason. 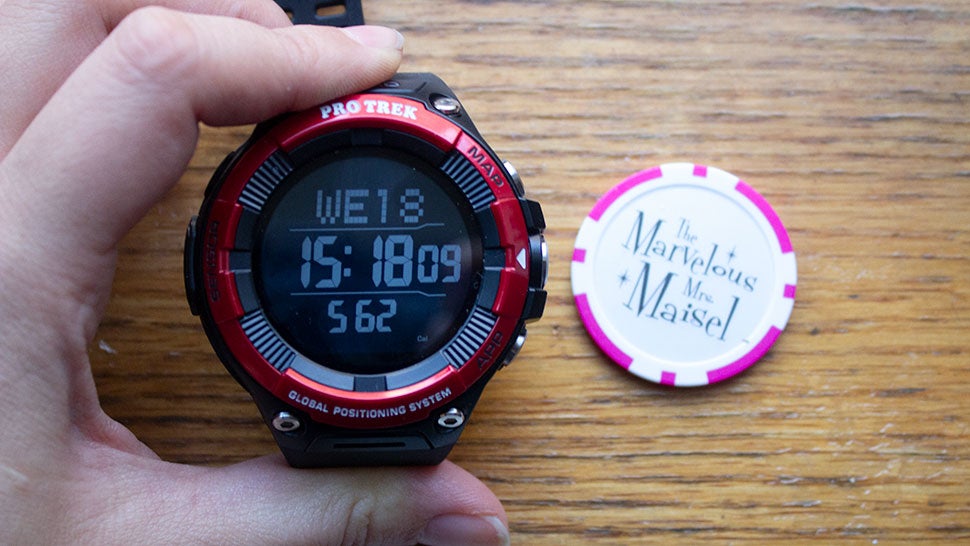 You can fit that poker chip neatly on top of the display. It big. (Photo: Victoria Song/Gizmodo)

Wear OS itself is not an operating system that lends itself to intrepid adventurers – though Casio does an admirable job of trying to shoehorn a barrage of sensors into the ugly stepsister of smartwatch operating systems. For starters, out of the box, there are competing apps for tracking your data. You could use Google Fit, which is not great and will inexplicably rely on your phone’s GPS. Or you could use Casio’s suite of native apps, which actually makes use of its built-in GPS sensor, maps, altimeter, barometer, compass, and heart rate monitoring. These apps are better than Google Fit, but it also feels like there’s a few too many. There’s one for tracking activities, one for compass, one for “moment setting” or giving you reminders every 200m of altitude you climb, another for “point navigation” or directions, and so on. Surely some of these could have been condensed, but at the same time, this cluttered approach feels oddly appropriate for Wear OS.

I wish I could say all those nifty features worked perfectly for me, but I had GPS-related issues during testing. In Casio’s native activity app, I was prompted to wait and point my device at the open sky. I ended up shivering for 10 minutes in 30-degree weather as my watch repeatedly told me it couldn’t find a connection. I ended up running without the built-in GPS for a 2.14-mile run, which the watch logged as 2.2 miles. Not too shabby for a GPS-less run. Or so I thought. After a troubleshooting session with Casio, it turns out the watch did track my run via GPS but said I didn’t because New York’s skyscrapers meant I was tracking on a significantly weaker signal. I did a second 4.6 mile run tracking via Google Fit, my phone, and the Series 5 to see if it was any better. It delivered roughly similar results, clocking me at 4.68 miles. That’s overreporting compared to the Apple Watch and my phone, but not egregiously so. Heart rate readings were also accurate compared to the Apple Watch Series 5, which I wore simultaneously while running.

My troubleshooting session with Casio, however, highlighted how annoying updates on Wear OS can be. Although I had auto-updates enabled, some hadn’t actually downloaded, or been interrupted halfway through. The menus to access everything are unnecessarily buried in a nesting egg of menus, and searching for anything on-wrist in the Google Play Store can be a pain. 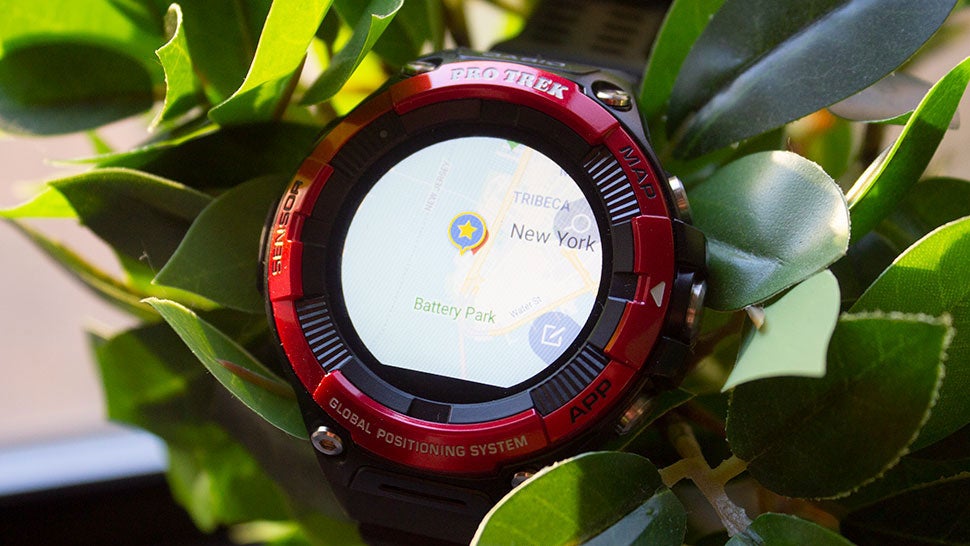 The GPS maps are pretty accurate but gave me a lot of grief while testing. (Photo: Victoria Song/Gizmodo)

When you factor in the Pro Trek’s £500 price tag, the watch is a curious anomaly. It’s too expensive for casual users, but given the look and the feature set, this watch isn’t meant for them. That pricing is right on par with some of Polar and Garmin’s higher-end running watches, but because Casio’s chosen Wear OS, the watch also lacks their finesse. Polar and Garmin both have in-depth platforms and their own companion apps that truly make sense of your metrics. They make more sense for results-oriented athletes. Meanwhile, accessing your results off Wear OS has never been the smoothest experience. (Again, Google Fit is just...not good). The Pro Trek has so many sensors and advanced capabilities, but Wear OS is the reason why you wouldn’t get it.

I initially set out to review the Casio Pro Trek WSD-F21HR in an experiment to see if a custom piece of silicon would somehow breathe new life into Wear OS. The answer is sort of. Undoubtedly, the Pro Trek has better battery life. That’s a must for fitness watches, particularly those meant for the outdoors. But the battery savings aren’t so amazing that I’d burn the Qualcomm Snapdragon Wear 3100 chip at the stake. The Casio is a smidge faster with app loading and screen swiping. That’s just not enough.

Really, all this reconfirmed Wear OS’s mediocrity isn’t a pinpointable problem that can easily be fixed. It’s not as simple as swapping out the chip, or making a good app, or wrapping everything in a pretty package. The problem is deeply embedded in the entire platform. Maybe there’s some hope given that Google just bought Fitbit, which has a stable of solid products under its belt. But this Casio watch – through no fault of Casio’s really – felt like Frankenstein’s monster. Something cobbled together from disparate parts that work fine, but ultimately is not the thing you initially envisioned.