This Interactive Timeline For Netflix's Witcher is Super Helpful

By Ethan Gach on at

The Witcher TV show is a totally enjoyable fantasy romp that is nonetheless difficult to parse due to its multiple timelines. Fortunately, there’s now an interactive timeline of the show’s major events and characters’ births that breaks down the show’s world building into a series of easily digestible blips.

Going into Netflix’s adaptation, which draws from both the video game trilogy and the original books the games are based on, I thought I’d have an easy time making sense of what the hell was going on. I’ve played 2.5 of the games, plus the lore-heavy card game spin-off, and read several chapters from the first book and dozens of wiki entries. But even I was still lost for a lot of it.

Conjunction of the Spheres? The Curse of the Black Sun? The show doesn’t offer much background on these events, possibly in part because of how silly they sound, which makes it hard to get a good feel for the stakes and what some of the main power brokers in the world of The Witcher are after. It doesn’t help that the show unfolds non-linearly either, with back-to-back scenes sometimes separated by decades, something that’s not made obvious until late into the first season. 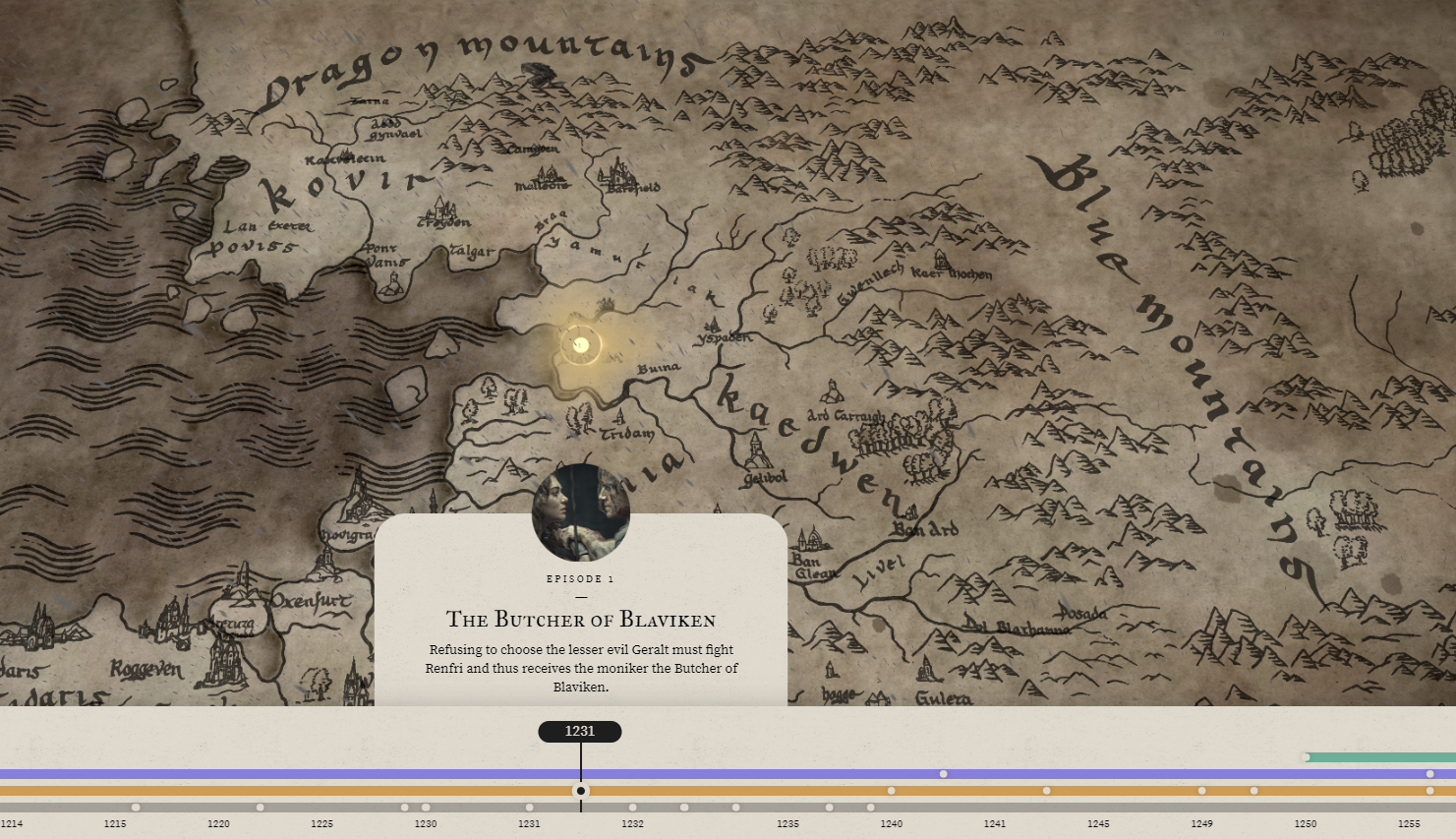 Netflix released a brief summary of the timeline the show is working off of in a tweet last week, but has since put together a much more in depth one that you can click through. That timeline is overlaid onto a sweeping map of the northern part of the show’s world, The Continent. The timeline begins at the Conjunction of the Spheres dated sometime before the year 500 (roughly 230 BR, in the book’s notation system), and ends with Geralt and Ciri finally meeting in 1263. That’s an entire millennium to get a handle on.

The earliest event that takes place in the show, meanwhile, is Yennifer’s forced induction into the mage academy of Aretuza, which the timeline says takes place in 1206. The entire events of the show span over 50 years, in other words, something the timeline does a much better job of conveying than the show, since Geralt and Yennifer themselves don’t age.

In addition to putting the scale of time involved in perspective, the timeline also shows where each of the events took place. The Kingdom of Cintra is big and the only buffer between Nilfgard and the Northern Kingdoms, which is why it matters so much. And there are some animations at each point on the timeline. When Geralt massacres a bunch of people in an accident that earns him the moniker “Butcher of Blaviken,” it’s raining, because you know, sad times.

More helpful are the puddles of black ink that blow up when you click on the Conjunction of the Spheres, which help neatly illustrate the sort of inter-dimensional cataclysm people in the world of The Witcher think brought humans and monsters into a continent previously inhabited only by elves, dwarves, and the like. The timeline doesn’t really go into events not referenced in the show, but it does a great job of clarifying everything else.

This story originally appeared on Kotaku.