Tinder Is Getting a Panic Button Specifically Tailored to Dating

Tinder today has announced it’s rolling out new features to help better protect users both on and off the platform, including by releasing a kind of “panic button” for real-world meetups.

The company announced this week that users in the US would soon have access to the tool, which will connect them to emergency services in the event they feel unsafe with a person they’ve agreed to meet outside of the app. Tinder and its parent company Match Group partnered with company Noonlight on the feature, which allows users to trigger an alarm that then connects them with the service’s emergency responders.

The feature works by allowing users to share the details of their date – including the time and location – ahead of a meetup. According to the Wall Street Journal, which first reported the feature, users must enter a code after they’ve triggered the alarm in the app. If they fail to, they’ll receive a text. If they respond neither to the text nor a subsequent phone call, the Journal said, Noonlight will send emergency services to the location of the date.

The feature also adds a badge to the user’s Tinder profile, which Tinder CEO Elie Seidman told the Journal works like “the lawn sign from a security system,” and as a kind of “deterrent.” 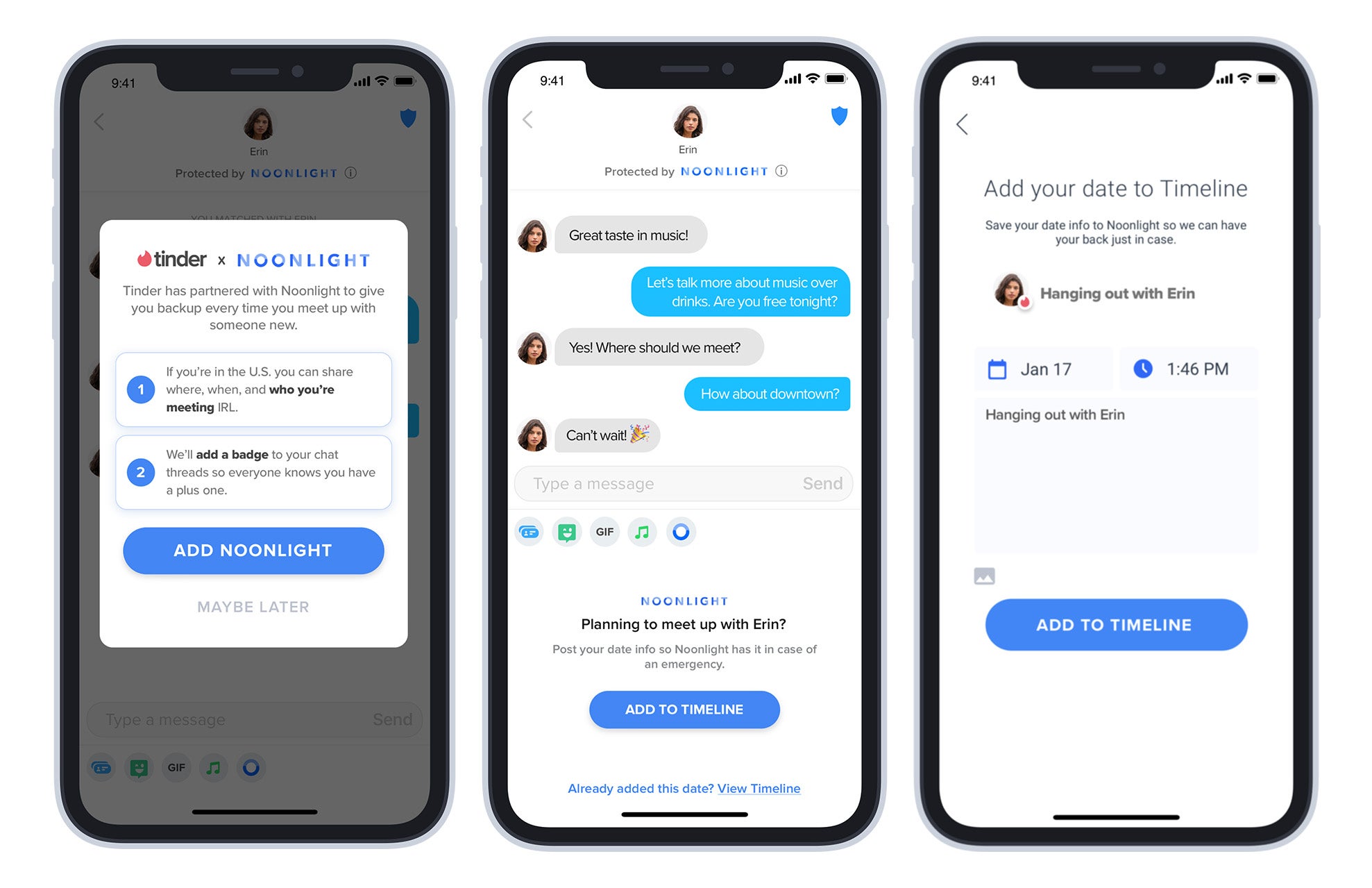 When asked about how users will have their information tracked by Noonlight while they’re using the tool, a spokesperson told Gizmodo that it “does not opt them into sharing their location with Tinder at all times. That is contained within the Noonlight app, which needs background location actively turned on to ensure that authorities can be dispatched to the appropriate place.” The spokesperson clarified that users can toggle the feature on or off at any time.

“A safe and positive dating experience is crucial to our business,” Match Group CEO Mandy Ginsberg said in a statement. “We’ve found cutting-edge technology in Noonlight that can deliver real-time emergency services – which doesn’t exist on any other dating product – so that we can empower singles with tools to keep them safer and give them more confidence. Integrating this kind of technology, in addition to the other safety standards that Match Group is implementing across our brands, is a necessary step in dating innovation.”

In addition to the panic button, Tinder is also testing a photo verification feature to ensure users are, indeed, who they say they are using human-assisted AI, and verified profiles will get blue ticks to indicate they’re legit.

Another feature the service is testing is a tool to detect offensive language in chat conversations using machine learning. Users who have access to the feature will see a “Does This Bother You?” prompt. If they respond “yes,” they can report the user. On the flip side, a message flagged as potentially abusive will prompt the sender with an “Undo” button, allowing a user to reconsider before sending something flagged as inappropriate or offensive.

All of these tools, while perhaps imperfect solutions, have the potential to help make the platform a little safer for users. At the same time, the trade-off is data-sharing more than the extent to which users already do.