Engineers have developed robots that are capable of picking up objects as delicate as eggs or grapes without damaging them, but soon they could handle even the smallest and most fragile components using a new gripper design that can lift and manipulate objects without actually touching them.

It’s a trick reminiscent of the mystical Force powers wielded by the Jedi that make the Star Wars movies watchable, but there are no microscopic midichlorians at work here, and no sorcery. Marcel Schuck, a former doctoral student at the Eidgenössische Technische Hochschule Zürich, has instead harnessed a technique known as acoustic levitation to expand the capabilities and precision of the robots that now dominate manufacturing.

If you’ve ever felt the boom from a large speaker on your face at a concert, then you’re already familiar with the basic principles of acoustic levitation. In lieu of giant speakers, tiny transducers produce ultrasonic sound waves imperceptible to the human ear that are focused in such a way that pressure points are created where multiple sound waves intersect. These pressure points are completely invisible, but they can trap tiny objects and make them appear as if they’re floating in mid-air. And in recent years we’ve seen demonstrations where manipulating those sound waves can allow an object to be moved around and repositioned.

Even the most delicate of robotic grippers would be too heavy-handed for the impossibly tiny parts used to make semiconductors or even the parts used to build complex analog watches, but there’s also the issue of contamination. Microscopic dirt and debris can be easily transferred from a gripper to an object it’s handling. And in many manufacturing disciplines, keeping components clean is vital to ensuring the final product actually works properly.

Schuck also points out that the ultrasonic gripper he’s developing will have cost benefits as well, despite currently being cutting edge technology. Robots designed for factories are currently purpose-built and programmed to handle very specific parts or objects. They can pick up and manipulate a cog with ease, but place something entirely different in front of them and they’ll struggle to perform their pre-determined tasks. Researchers have made efforts to develop grippers that can grasp a wide variety of objects, and paired them with artificial intelligence-based imaging systems allowing robots to figure out all on their own how to handle something they’ve never seen before, but there are still limitations to that approach. 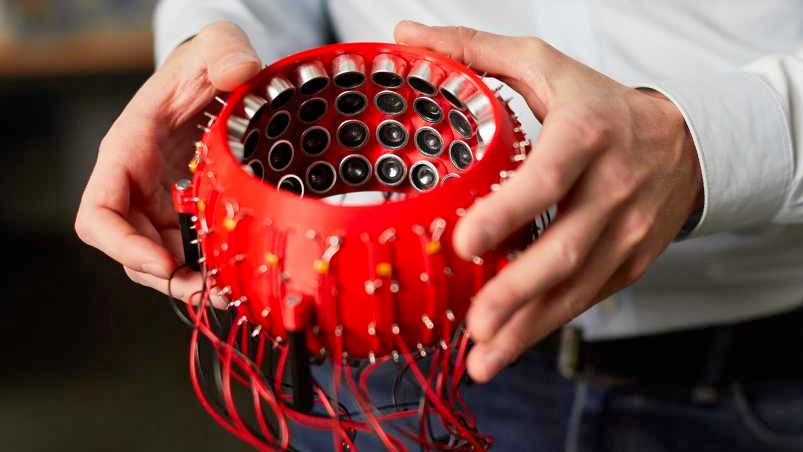 Acoustic levitation could be the key to developing robots capable of handling a wide variety of objects. The hardware would stay the same, but software could adjust the intensity and frequency of the ultrasonic sound waves being generated to alter the size and position of the pressure points that do the actual lifting. The approach is still limited to very small and very light objects, but when paired with an intelligent imaging system the robot wouldn’t have to be re-programmed every time it was tasked with grabbing something different. As a result, factories wouldn’t have to pay for constant retooling and the downtime required for robots to be reconfigured.

The timeline for this approach to be practical is still quite a few years away, however. Acoustic levitation is a phenomenon we’ve known about for decades, but finding practical applications has been challenging because objects have to be incredibly small and light to be lifted by sound waves. But given how miniaturised all of our electronic devices have become, acoustic levitation is a solution that might have finally found a problem that needs solving.