When, Exactly, Did Palpatine...You Know?

Someone in the galaxy far, far away, looked at a man named Sheev Palpatine – Chancellor of the Republic, walking prune, fascist ruler of the Galactic Empire, evil space wizard – and, in their best Lando Calrissian impression, went “Hello, what have we here?”

This is a thing we know. But the real question isn’t really if Sheev did the deed. It’s more about when.

Star Wars: The Rise of Skywalker establishes some intriguing things about Emperor Palpatine throughout its twisty-turny, fanservice-laden narrative. Not only is the Emperor reborn, sustained by Sith Eternal magics and his own hate to reforge his order from the planet Exegol, but he’s been doing it in service of one goal: to lure his granddaughter to the Dark Side of the Force, to create an Empress of the Sith that he and the living memory of the Dark Siders before him could possess and influence.

Rise’s most bonkers twist in all this is not that Palpatine is back – that’s something that, for better or worse, Star Wars tie-in media has been laying the groundwork for for a while at this point. It’s not even that said granddaughter is Rey, who is forced to confront, and ultimately reject, the legacy demanded of her blood to take her own path, inspired by her found family in the Skywalker legacy. The twist that predicates all this is that, in order to have a granddaughter in the first place, Palpatine – Sheev Palpatine – had to have a child of his own, a son, as Rise reveals.

And although it’s possible in the world of Star Wars, which is full of clones, ghosts, laser swords, and weapons the size of small moons and planets that Palpatine bore a child through means beyond traditional procreation – a manipulation of the Force akin to Anakin Skywalker’s immaculate conception, the aforementioned cloning or some other genetic manipulation, perhaps even surrogacy. But there’s a far simpler alternative: Palpatine met a woman, perhaps even fell in love, and then, well, told her the tragedy of Darth Plagueis the Wise, if you will.

Have *you* ever heard the tragedy? (GIF: Lucasfilm)

But Palpatine was a busy man, between managing to keep himself secret from some of the most oblivious space wizards to ever sit on the Jedi Council, shadow-puppeteering an interstellar conflict from both sides, forging his own autocracy out of the ashes of one of those sides, and then...well, messing about with ancient prophecies and evil magicks while his subordinates bickered endlessly. Regardless of what he was actually doing, manufacturing a plan to seek out untold power in the unknown regions of space – one that also accounts for, say, your best underling having a change of heart and chucking you down a giant chasm in your office aboard your moon-sized planet killer – requires focus. So when, in and among all that, did Palpatine have the time to be single and ready to mingle?

Let’s do what all Star Wars fans do: obsess over needless minutiae and stare at some timelines.

Let’s start with some extrapolation from Rey’s birth. Thanks to the Star Wars Visual Dictionary books, we know that Rey was born in 15 ABY – that’s “After the Battle of Yavin” in Star Wars chronology, so 15 years after the time of A New Hope. But in case you missed it, the most recent visual dictionary for Rise of Skywalker brought in a new time measurement that reframed galactic events around the destruction of Starkiller Base (BSI and ASI, “Before and After the Starkiller Incident”) in The Force Awakens. Let’s...ignore that for now, and go with the BBY/ABY standard, as we’ll eventually be dealing with timelines from earlier on in the Skywalker Saga.

That new book tells us that Rey is approximately six years old when she is left on Jakku by her parents in 21 ABY – her father, the son of Palpatine (played by Billy Howle), and her mother (Killing Eve’s Jodie Comer) – as they attempt to flee the wrath of Palpatine in the form of Sith-obsessed assassin, Ochi of Bestoon. Ochi and his ship, the Bestoon Legacy, catch up with Rey’s parents shortly after this: the Rise dictionary tells us that her parents perished 13 years before the Starkiller incident. Given that The Force Awakens takes place in 34 ABY, would make their deaths also take place the same calendar year Rey was abandoned on Jakku. 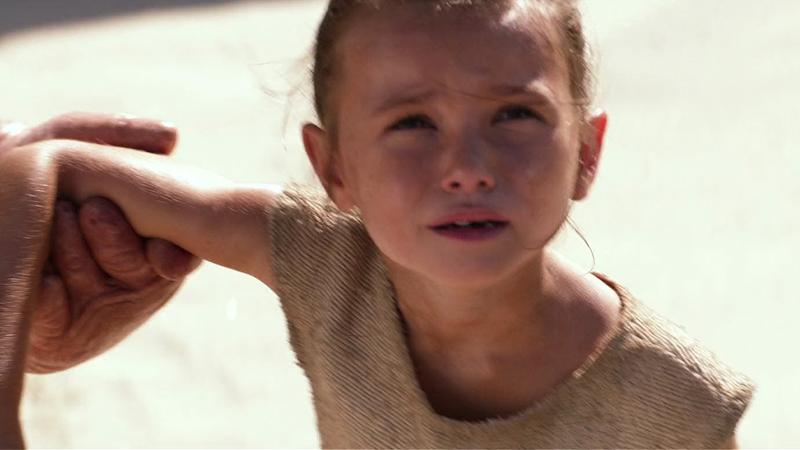 Rey, left in the “care” of Unkar Plutt. (Image: Lucasfilm)

We’re not given an official age for either Rey’s father or mother, so the only thing we have to go by right now to make a rough approximation is Howle’s age. According to IMDB, Howle was born in November 1989 – given that Rise released in December 2019, he was presumably 29 when he shot his brief appearance as Rey’s father, unless it was left alarmingly late. If we make the assumption that Rey’s father shares Howle’s age (which is a big assumption obviously as actor age does not necessarily align with character age), and was 29 when he died in 21 ABY, that would mean he was born in roughly 7 BBY. Don’t forget 0 BBY was a year!

So then, if Rey’s dad – Sheev Jr., if you will – was born in 7 BBY, depending on the when of the Star Wars calendar, and making the assumption of a standard 9 month pregnancy, Rey’s Dad was presumably either conceived that year or the latter half of 8 BBY. What was going on in the Galactic space around then?

At this point, the Republic’s reformation into the Galactic Empire was well established – it had been over a decade since the end of the Clone Wars. The Death Star had already been mostly built, entering its final stages of construction above the planet Scarif a couple of years prior, and Han Solo had won the Millennium Falcon from Lando Calrissian around a similar time. Jyn Erso, having been trained by rebel partisan Saw Gerrera from a young age, was active as a dissident guerrilla fighter, assassinating the Imperial scientist Dorin Bell on the planet Horuz. In perhaps a wonderful bit of foresight, in 7 BBY a Festival of the Ancestors celebration would have taken place on Pasaana – given that they take place every forty-two years, the next time it would have occurred was the celebration Rey and her friends find themselves caught up in when she finally rediscovers the Bestoon Legacy and, ultimately, the true legacy of her family.

Beyond that, we don’t know all that much (at least within the Star Wars canon). Other than the fact that, well...it definitely would confirm that Sheev, err, played his part in this conception after being horribly disfigured by Mace Windu’s reflected lightning bolt attack. 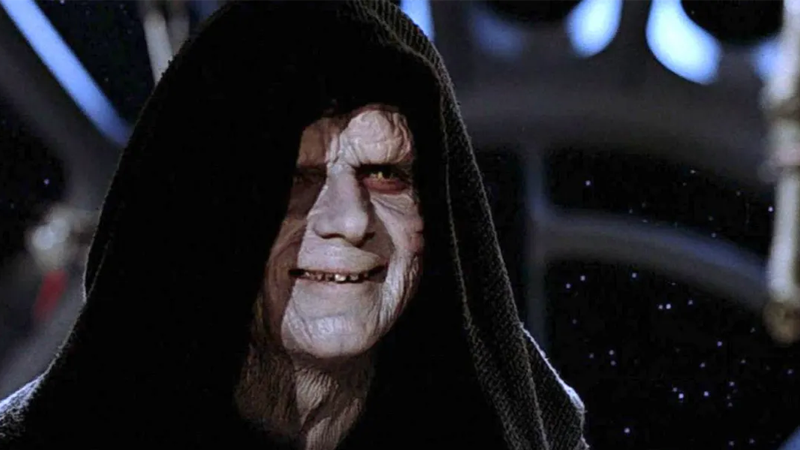 What a catch. (Image: Lucasfilm)

Look, whatever floats your boat, Palpatine’s Potential Paramour. You do you. But hey, given that George Lucas’ early plans for Underworld, the live-action Star Wars TV show that never was, included a sympathetic Palpatine scorned by a criminal lover...maybe the idea of Palpatine carrying on his legacy has been in plans for much longer than any of us could have considered?