While we generally stick to recommending new books, there are tonnes of older sci-fi and fantasy books worth your time – including those with the added interest of television or movie adaptations on the way. Here are eight titles you should add to your read (or re-read) list; if you really want an even 10, go ahead and throw Dune and The Stand on there too.

There’ll soon be an HBO series based on this 2016 dark fantasy novel about a young African American man whose experiences growing up in blatantly racist mid-century America – as well as his deep love of science fiction – help prepare him for the unusual things he learns about his family’s past. Tied into that: a nefarious secret society, the strangely elastic ways of space and time, and some truly unsettling H.P. Lovecraft-inspired horrors, as well as dynamic supporting characters who go on their own fascinating journeys.

With the wonder-twin powers of Jordan Peele and J.J. Abrams behind the scenes, and talents like Aunjanue L. Ellis (When They See Us), Jonathan Majors (The Last Black Man in San Francisco), and Jurnee Smollett-Bell (Birds of Prey) heading up the cast, we’d be excited even if we didn’t already love the book it’s based on. Though of course, it’s too early to know for sure, some of the characters listed on the show’s imdb page hint that the Lovecraft Country series will take at least a bit of creative license with the book – which is to be expected. But even if the show sounds like a sure thing, why wait? The source material is an engrossing, wildly creative read from start to finish.

This Arthur C. Clarke Award-winning novel came out back in 2014, so if you read it back when it was on every “best of the year” list, why not pick it up again? No less a literary authority than George R.R. Martin called it “a book that I will long remember, and return to.” And, of course, there’s a fresh reason to revisit Station Eleven: The book – a beautifully written tale set both at the very beginning of a global pandemic and 20 years after its widespread devastation – is being adapted into a limited series. Mackenzie Davis (Terminator: Dark Fate) stars as Kristen, a young woman who grows up as a member of a travelling theatre troupe, with Himesh Patel (Yesterday) playing fellow post-apocalyptic survivor Jeevan and Gael García Bernal playing Arthur, a Hollywood star who has interactions with both Kristen and Jeevan in different places and times.

Confirmed fans of Station Eleven who are impatiently waiting for the series to arrive will want to know that Mandel’s long-awaited next novel, her first since Station Eleven, is due out next month; it’s called The Glass Hotel and follows interwoven plots about a collapsed Ponzi scheme and a woman’s mysterious disappearance at sea. 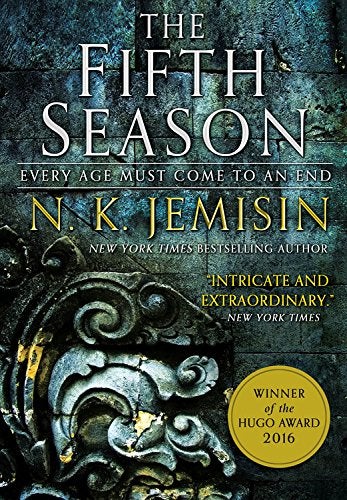 3) The Fifth Season by N.K. Jemisin

Speaking of acclaimed authors with new books out in March, record-setting, history-making Hugo winner N.K. Jemisin has New York-set epic fantasy The City We Became on the very near horizon.

But another project for the busy Jemisin is a potential TV adaptation of The Fifth Season, the book that kicked off her Broken Earth trilogy, about women from different time periods – some of whom have extraordinary gifts – struggling to recover in the wake of catastrophic climate-change events on their planet.

Though there hasn’t been much in the way of updates since August of 2017, when the author tweeted her excitement that TNT would be developing the book as a drama series, these things obviously take time – and with that time, you can dive into not just The Fifth Season, but also the other Hugo-winning books in the trilogy, The Obelisk Gate and The Stone Sky, while you’re at it.

Hulu is full steam ahead on an anthology series based on this 2013 collection of stories, though the show will have the more streamlined title of Monsterland. Hulu has already found success with Blumhouse’s Into the Dark horror anthology series, but Monsterland looks to have more of an X-Files quality, based on a recent description of the show (as part of Deadline’s report that Mike Colter, of Evil and Luke Cage fame, was joining the cast) as being “full of encounters with mermaids, fallen angels and other strange beasts” and “[following] broken people driven to desperate acts in an attempt to repair their lives, ultimately showing there is a thin line between man and monster.”

That sounds pretty true to Ballingrud’s evocative, Shirley Jackson Award-winning collection, which contains horrors as varied as werewolves, vampires, white supremacists, Hurricane Katrina, and a trunk full of human skin. The author’s other credits include The Visible Filth, the novella that was made into the 2019 horror feature Wounds, which also found a home on Hulu; Wounds director Babak Anvari is one of Monsterland’s executive producers.

5) The Witches by Roald Dahl

Why not start your Halloween countdown early with a quick read of this enduringly chilling tale? Roald Dahl’s 1983 novel, which is aimed at kids but contains the kind of nightmare material that’s potent enough to haunt adults, already has one memorable adaptation out there. And soon, Nicolas Roeg’s 1990 film, starring Anjelica Huston as the glamorous leader of a coven of witches – glamorous, that is, until she casually peels the skin from her face, revealing her monstrous true visage – will be joined by a new version from Robert Zemeckis, with Anne Hathaway as the Grand High Witch.

While Roeg’s film stayed pretty true to the original setting – a small boy vacationing on the English coast with his ailing grandmother discovers witches are real, shortly before he finds himself on the receiving end of a spell that turns him into a mouse – it made a notable change to the last act that allowed the film a different sort of happy ending than the author intended. Zemeckis has said his film, which comes out in October, will be set “in the Gothic South in the 1960s,” which suggests it may diverge even more from the source material. Dahl purists may disagree, but we’re pretty excited to see what the guy who’s mostly famous for Back to the Future and Forrest Gump – but who also made Who Framed Roger Rabbit and Death Becomes Her – is going to bring to the table. 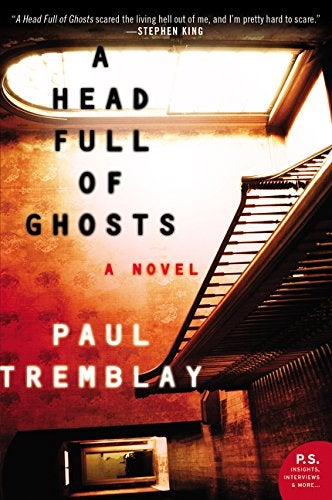 6) A Head Full of Ghosts by Paul Tremblay

This 2015 Bram Stoker Award-winning novel is about a family thrown into chaos when their teenage daughter suddenly starts displaying signs of severe mental illness. It’s so terrifying that her parents, coaxed on by a local Catholic priest, begin to wonder if perhaps there’s something demonic inside the girl – and then, in desperate need of cash, agree to appear on a reality TV show about their plight. The story then picks up over a decade later, as the girl’s younger sister recalls her conflicting memories of everything that happened.

Sounds pretty intriguing, doesn’t it? Filmmaker Scott Cooper – whose upcoming Antlers is one of our most anticipated horror movies of 2020; his other credits include moody dramas Crazy Heart, Out of the Furnace, and Black Mass – was just confirmed to be directing the big-screen adaptation, with Margaret Qualley (Once Upon a Time in Hollywood, The Leftovers) starring, presumably as the younger sister who grows up haunted by her traumatic past.

7) Shadow and Bone by Leigh Bardugo

Hot on the heels of The Witcher, Netflix is busily readying another epic fantasy adaptation: Leigh Bardugo’s hugely popular Grishaverse novels, which include a trilogy that begins with 2012's Shadow and Bone, and a duology that begins with 2015's Six of Crows. The eight-episode show will actually cover events from both series, but Shadow and Bone is the obvious starting point for newcomers.

Set in a land divided by a treacherous darkness, it’s the tale of a young warrior who discovers she’s capable of summoning magic so powerful it lands her a spot training with her country’s magical army – though its elite leader has some sketchy designs on her gifts (beyond using them to save everyone in the kingdom from monsters, that is). Author Bardugo is among the executive producers – with Eric Heisserer (Bird Box, Arrival) acting as showrunner – and as of late December, the show was filming in Budapest.

8) Children of Blood and Bone by Tomi Adeyemi

The big-screen adaptation of Tomi Adeyemi’s 2018 West African-inspired fantasy (which was followed by a sequel, Children of Virtue and Vengeance, in December 2019) was originally a Fox 2000 project, but fortunately, it made the leap to Lucasfilm and Disney after, you know, that whole business – with director Rick Famuyiwa (The Mandalorian) apparently still attached.

Not unlike Shadow and Bone, Children of Blood and Bone follows a young woman who finds the fate of a kingdom on her shoulders – a classic fantasy plot – but the stories are quite different otherwise. Adeyami’s tale introduces us to Zélie Adebola, who remembers her mother’s magic in a world where enchantment has been wiped out by a monarch who never wants to see it return – though Zélie soon becomes caught up in a perilous adventure to bring magic back, including her own abilities. So far there’s no casting news to report, but we’re excited to see Disney putting its considerable might behind an entertaining fantasy tale that isn’t based on one of its own animated films or well-worn successful franchises.