Scientists have discovered evidence of the largest energy outburst ever recorded. The clues to this ancient explosion come in the form of a giant bubble of ancient radio waves.

The researchers observed the Ophiuchus Cluster of galaxies, the second-brightest galaxy cluster in the sky when viewed in x-rays, which sits 390 million light-years from Earth. The central region of the cluster contains a peculiar feature: a concave edge, like a small bite taken out of a cookie. When researchers analysed radio telescope images of the area and compared them to x-ray images, they realised they were looking at the remnants of a truly enormous outburst from the centre of an active galaxy.

The discovery’s story begins with a 2016 study into the Ophiuchus Cluster, using data from the Chandra X-ray Observatory, led by Norber Werner, who is now an associate professor at Masaryk University in the Czech Republic. Though they were studying how the plasma at the centre of the cluster cools, they noticed a peculiar concave shape at the core’s edge. They considered that it could have been the result of some kind of huge explosion, but opted for less fantastical explanations, such as the motion of gas resulting from merging galaxies clusters.

A potentially huge explosion piqued the interest of another team of astronomers, led by Simona Giacintucci at the US Naval Research Laboratory. They sifted through low-frequency radio data for evidence of relic particles from such an explosion. They found this evidence in new radio survey data collected by the Murchison Widefield Array in Australia, as well as in old observations taken by the Giant Metrewave Radio Telescope in India and the Very Large Array in the US. They published their work in The Astrophysical Journal. 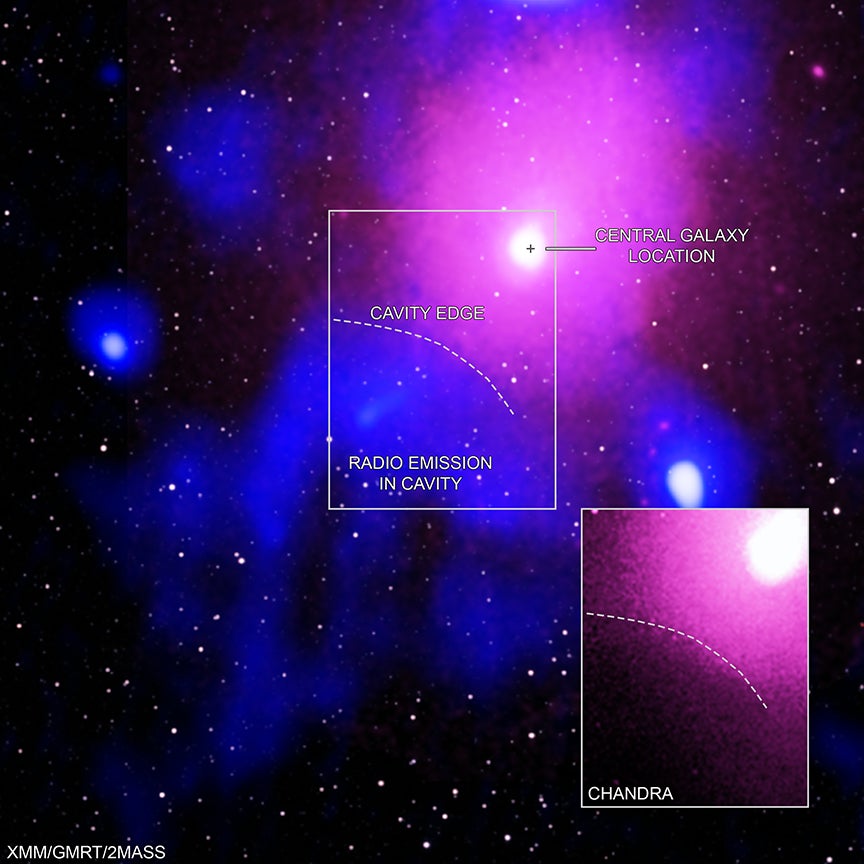 The combined data “showed very clearly that the extended radio source fits the X-ray edge like a hand in a glove,” Giacintucci and study author Maxim Markevitch from the NASA/Goddard Space Flight Center wrote in a blog post for the Chandra X-Ray Observatory. They were looking at an enormous region in the galaxy cluster’s plasma that had been carved out by high-energy electrons emitting radio waves. This cavity, as the researchers called it, was opened up by an unthinkably large outburst of energy. Scientists have seen other such bubbles before, but the bubble is usually inside the centre of the galaxy cluster, not chipping off a piece of its side.

But, according to Giacintucci and Markevitch, the outburst that would have produced this concave edge would be five times larger than the previous largest energy outburst ever discovered. And the energy of the radio waves – the telescopes used in this study mainly observed low-frequency radio waves – suggest that the explosion is an ancient “dinosaur,” according to the paper, occurring hundreds of millions of years ago (To the pedants in the comments: Yes, I mean hundreds of millions of years before the galaxy cluster, which is hundreds of millions of light-years from us, released the light that we are now observing today). The higher-frequency radiation of this explosion has long since faded.

What could have produced such an explosion? Perhaps it was a large outburst from the supermassive black hole at the centre of an active galaxy.

There are still questions left to answer. Did this explosion have a role in the evolution of the plasma in the cluster’s core? Why is there only one bubble, when outbursts like these are typically produce two symmetrical bubbles? Perhaps digging deeper into the lower radio frequencies will reveal more secrets obscured by time.

Werner, the scientist who led the work that initially dismissed the idea that the bitten-cookie shape could be caused by a huge explosion, is happy to be proven wrong, according to the Chandra blog post. “Extraordinary claims need extraordinary evidence and the observation reported in this paper provides the evidence that we lacked,” he said.