Star Wars toys are all about getting the characters we love in playable plastic format, but really, from Kenner Troop Transports to Micro Machines, some of our fondest memories are of getting those glorious vehicles to shove said characters into. And that’s what Hasbro’s latest Star Wars toy line is all about, in very cute fashion.

Aimed at younger fans of the galaxy far, far away than perhaps diehard collectors with shelves full of Black Series action figures – although maybe even they cannot resist the allure of Baby Yoda – Star Wars: Mission Fleet will celebrate all vehicular corners of the Star Wars galaxy, from the movie trilogies to TV shows like The Mandalorian and Clone Wars. The line pairs 2.5"-scaled little figurines with chibi-fied takes on ships, speeders, and walkers from across the saga. Take a look at the first wave of Mission Fleet vehicles hitting shelves later this year below. Note that UK pricing and availability for all of these is currently TBA.

Mission Fleet’s offerings will be split into three different price tiers. Coming in at $8 (£6.17) apiece are smaller “Micro Vehicle” and jetpack-clad characters, single figures that come with a small backpack attached mode of transport – like Boba Fett and the Phase-II Clone Trooper – or a one-person vehicle, like Ahsoka Tano and her “Aquatic Attack” speeder, or Chewbacca and his Wookiee attack helicopter. As well as the vehicles themselves having action features like alternate transport modes or movable parts, each figure will come with an accessory like a lightsaber or blaster to take into battle.

Up next are slightly larger vehicles – speeder bikes and walkers – that are a little more involved than the Micro Vehicle sets, and will sell for $15 (£12) each.

Representing Clone Wars in this tier are Obi-Wan Kenobi and Captain Rex, who come with a BARC Speeder Bike and AT-RT walker, respectively. Obi-Wan’s speeder includes a removeable sidecar with room for another figure, as well as a projectile launcher that can be repositioned on multiple points on the vehicle (as well as Obi-Wan himself and his lightsaber, of course!). Meanwhile, Rex’s AT-RT features multiple projectile launchers, which can be attached and detached across several hardpoints on the walker – with Rex himself carrying his two blaster pistols into battle.

But perhaps of most interest is the third speeder in this price range. Inspired by The Mandalorian, the “Battle for the Bounty” set features the show’s titular bounty hunter, who comes with not just his blaster rifle and pistol, but the jetpack given to him by the Armourer during the climax of the show’s first season. Like Obi-Wan’s speeder, the bike the Mandalorian can be mounted on includes a projectile launcher that can be placed on multiple points on the vehicle, but the bike also has a second, very important attachment: Baby Yoda’s floating bassinet!

The Child’s container can be attached to the Mandalorian’s speeder or left to float as a standalone, but perhaps most important of all: Yes, it does include a removable Baby Yoda, depicted clutching the little silver joystick knob he was so enchanted by aboard the Razorcrest. Frankly, this might not just be the best accessory Mission Fleet has to offer so far, it might make the Mandalorian’s speeder bike the must-have set of the entire line.

If you want something a little bit grander, however, rounding out Mission Fleet is a trio of vehicles that takes the battle off the ground and into space: Starfighters, away! Retailing for $20 (£15) each, the three fighters in the first wave – Anakin’s Jedi Starfighter, Darth Vader’s TIE Advanced, and Luke Skywalker’s X-Wing – come with a figure as well as moving parts, like openable cockpits and landing gears, or, in the case of the X-Wing and Jedi Starfighter, S-foils that can be folded into flight and attack positions.

Each Starfighter will also come with an attachable projectile launcher that can be placed on multiple specific points on the ship – or combined with a provided tripod to create a separate mounted blaster accessory. If you buy multiple ships, you can even swap the blasters around, putting them on other vehicles in the line! The possibilities are endless, as long as they involve protecting Baby Yoda at all costs. 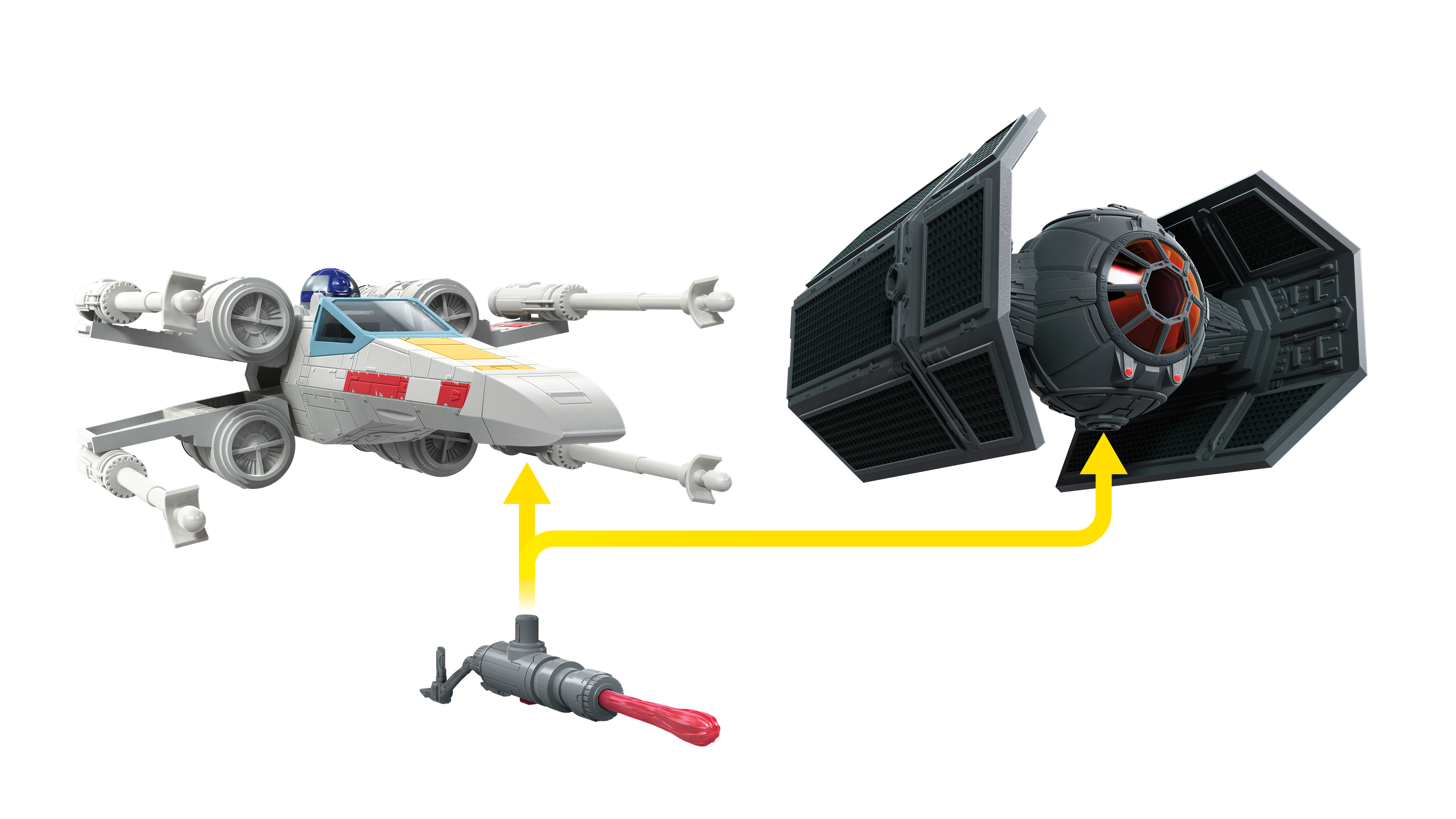 Universal attachment points mean launchers from any vehicle in the line can be used wherever you’d like. (Image: Hasbro)

If you’re looking to add these to your collection, you’ll have to wait a little while to get in on the vehicular action. The Star Wars: Mission Fleet line will begin rolling out this autumn.