Beneath the Arctic's Sea Ice, Robots Are Illuminating a Mysterious World

Less than 200 miles from the North Pole in the middle of the Arctic Ocean, the German icebreaker Polarstern sits frozen into the ice and shrouded in darkness. Several times a week, a handful of crew members venture forth from the relative safety and warmth of their vessel into a realm of bone-chilling temperatures, ice, and marauding polar bears where the sun hasn’t risen in over two months.

They’re on a mission to pilot a robotic vessel beneath the ice in order to explore one of the Arctic’s most mysterious environments. The work is fraught with challenges, including storms that break up the ice, setting tents and robots adrift, but to the scientists conducting the research, it’s worth it for the unprecedented dataset they’re able to collect.

This is just one of many research projects comprising the MOSAiC expedition, a year-long Arctic research campaign that sounds like a Jules Verne adventure on steroids. Frozen into the surrounding sea ice, the Polarstern is in the process of zig-zagging more than 1,500 miles across the central Arctic Ocean, skirting the North Pole while at the mercy of currents and winds. All the while, hundreds of researchers and support staff – who are tagging in and out for various legs of this scientific relay race – are collecting troves of data on the Arctic Ocean, its weather, its ice, and its ecosystems through a network of outdoor laboratories that form a perimeter extending up to 30 miles from the ship. 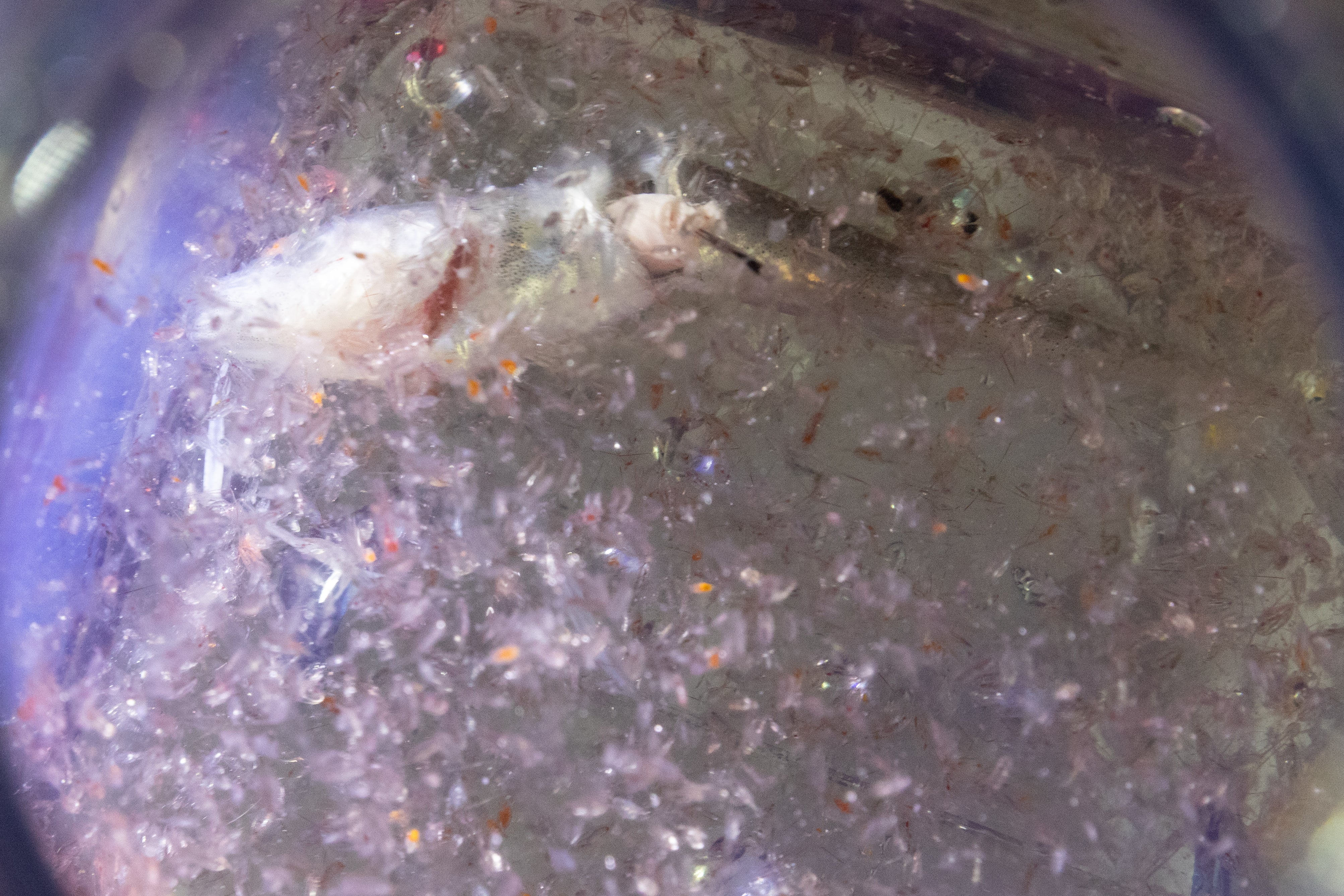 This expedition is not for the faint of heart. At these extreme latitudes, temperatures can plunge as low as minus 46 degrees Celsius in the winter. The sun sets in November and doesn’t rise again for 150 days. With the local polar bear population posing a constant risk, the floating base employs a complex bear defence system consisting of trip wires, a 360-degree infrared scanner, and half a dozen armed patrollers.

During the expedition’s first leg, Marcel Nicolaus and Ilkka Matero, both sea ice scientists at the Alfred Wegener Institute in Germany, helped establish “ROV Oasis,” one of four main research outposts comprising MOSAiC’s ice-bound observational network. Here, the star of the show is a mini fridge-sized robot outfitted with sensors, video cameras, and a manipulator arm, which enters the ocean through a hole scientists excavate in the sea ice. By piloting their tethered robot back and forth and up and down beneath the ice, multiple times a week for an entire year, the scientists are gathering an exceptional dataset on the poorly understood Arctic under-ice environment.

“It’s really the first time we are able to follow the entire seasonal cycle under the ice,” Nicolaus told Gizmodo. “We want to see how the conditions, as they change over the year, how they impact different things.”

One of the conditions the researchers are most interested in is the impact of changing illumination beneath the ice. Over the course of a year, the Arctic goes from perpetually lit in the summer to completely dark in winter as the roof of the Earth tilts toward and away from the Sun. The sea ice undergoes seasonal changes, too, melting and thinning as light and heat return in the spring and summer and becoming thicker in the autumn and winter.

The amount of light that passes through this frozen lid shapes the Arctic Ocean ecosystem, which starts with microscopic green algae that live in the ice and water. Because the ROV will be measuring illumination and collecting biological samples year-round, the researchers will get a glimpse of the ecological rejuvenation that takes place when the first glimmers of light return after winter’s long night. 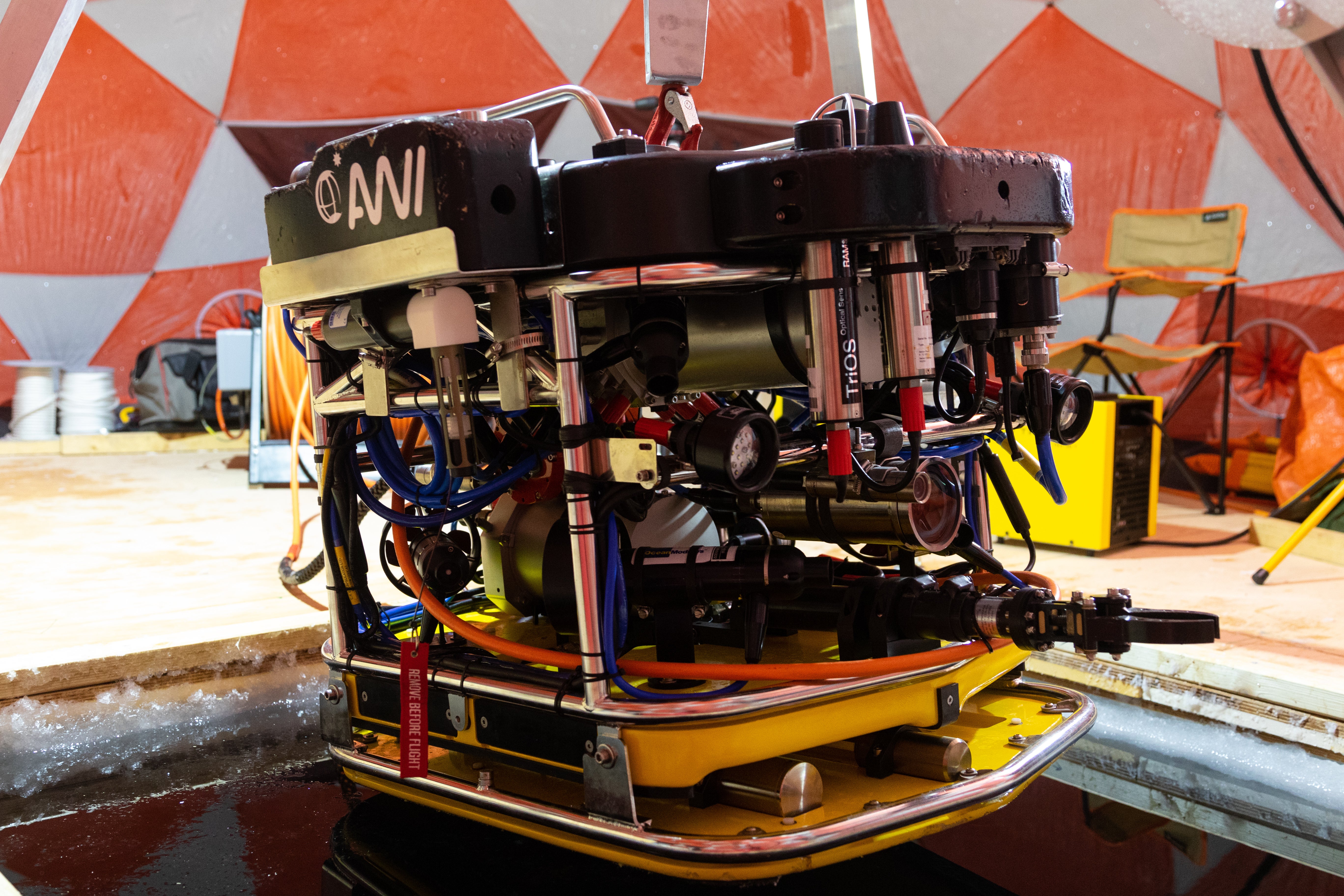 “Even small amounts of photons going through the ice can start biological productivity in ice-associated algae that are the bottom of the food web,” Matero told Gizmodo. The algae, in turn, provide food for tiny crustaceans called zooplankton, which feed a variety of fish and marine invertebrates.

Jessie Creamean, an atmospheric scientist at Colorado State University who participated in the first leg of the MOSAiC expedition, is hoping the ROV data sheds light on how the spring phytoplankton bloom contributes to the production of aerosols, small airborne particles that form the seeds for clouds. Further south, her research suggests ocean microbes play an important role in Arctic cloud formation, and while the same might be true for the central Arctic “we don’t actually know,” she said.

“We’re looking to investigate a key piece of the puzzle, this aerosol impact on clouds, where no one’s really looked before,” Creamean told Gizmodo.

In addition to light, the ROV is collecting data on other ocean conditions that shape life under the ice, like nutrients and salinity. It’s also revealing information about the bottom of the ice itself, whose bumps and valleys are being mapped in 3D with the ROV’s multi-beam sonar. By studying the topography of the ice and the properties of the water that surrounds it, scientists hope to gain a better understanding of what types of ice – thicker or thinner, covered by more or less snow – are most prone to melting.

Ultimately, Nicolaus said, this information will be fed into models to help predict where and when sea ice is most likely to melt across the Arctic, both over the course of the seasonal cycle and over the long term due to human-caused climate change. Indeed, all of the data the ROV collects will serve as a baseline of sorts to help scientists understand how sea ice and the unique habitat it creates is changing as temperatures rise across the Arctic.

“Once we can map different communities to different ice conditions,” Nicolaus said, “we can say how communities will likely change” as warming causes sea ice to thin and retreat.

As the ROV scientists learned early on in the MOSAiC expedition, collecting all of this data requires a certain amount of patience and adaptability.

The campsite for the ROV work consists of a tent pitched around the hole where the robot enters the water, as well as a nearby control room where two researchers – a pilot and a co-pilot – sit in front of computer monitors, steering the ROV in real-time with a controller and examining all the data coming off its sensors. Just a few days after the scientists had set this all up in mid-October, a storm passed through, breaking up the ice and setting the camp adrift. The researchers were forced to spend the early days of their field campaign mounting a rescue operation that involved flying a helicopter out to their wayward field camp in order to reclaim their supplies.

Then, everything had to be rebuilt. Following a two-week break, the team started diving again on 2 November. This was followed by two weeks of “quite successful operations,” Matero said, before another storm rolled in, setting the entire camp adrift again. This time, the team managed to stay at the same site for a few more weeks and continue diving. But on 16 December, yet another crack emerged in the ice – this time, running right through the camp. Once again, the researchers were forced to take everything apart before their equipment was swallowed by the sea.

By Christmas Eve, a new crew that had arrived for the second leg of MOSAiC set up ROV Oasis for the third time. With winter entering full swing by then, the ice became more stable. Happily, the camp hasn’t had to move since.

These sorts of logistical challenges are part and parcel of working in the Arctic, said Nicolaus, who has been doing field work in the far North since the late 1990s. Nevertheless, he said, the amount of trouble the ice gave them initially was a surprise.

“It was indeed more dynamic than we expected,” he said. “But that’s the Arctic.”

Fickle ice aside, some of the Arctic’s permanent residents pose other threats. As AWI sea ice physicist and ROV Oasis team member Christian Katlein, who is currently out on the ice, told Gizmodo in September, the seals that call this part of the Arctic home are notorious for chewing on wires, and “underwater cables are not very resistant to seal chewing.” To prevent any marine mammal-induced power outages, the ROV and its tether are stored in a metal mesh cage when not in use, a precautionary measure that has worked so far.

Then there are the bears. While there have been no dangerous encounters yet, on 9 November a polar bear wandered into Met City, MOSAiC’s meteorology research camp, during lunch hour. All research teams were evacuated from the ice and the entire afternoon’s work had to be cancelled.

“The priority is to make sure there’s no harm” to bears or scientists, Matero explained. “That’s our best way to make sure.”

Despite the many challenges of doing science in the high Arctic, for the ROV Oasis team it will all be worth it they can collect a full year’s worth of data, something Katlein said he was “very optimistic” about. “That is my hope and dream,” he said.

It helps that the Arctic Ocean is a stunning place to work. In the twilight days of October, Creamean recalled the sky becoming a wash of pinks and oranges as the dramatic angle of the Sun brought out dazzling blues in the ice.

“And then you go to complete darkness,” she said. “But it’s still really beautiful and bizarre.”