Very few land turtles managed to survive the meteor that wiped out the dinosaurs, but at least one species of primitive turtle managed to fend off extinction in the northern hemisphere, according to new fossils found in France.

New research published in Scientific Reports describes Laurasichersis relicta, the only known primitive land turtle from the northern hemisphere to have survived the Cretaceous-Paleogene (K-Pg) mass extinction, which occurred 66 million years ago when a large meteor struck the planet.

The term “primitive” is key here, as the newly described terrestrial species is a “stem” turtle, which means its lineage can be traced back to the earliest branches of its evolutionary family tree. Other, more modern land turtles (i.e. non-stem Testudines), managed to survive the mass extinction in this part of the world, but L. relicta was the only terrestrial stem turtle to keep on trucking in the northern hemisphere after the calamitous K-Pg event, according to the new research, authored by Adán Pérez-García from the Evolutionary Biology Group of the National University of Distance Education in Spain.

This now-extinct turtle lived around 56 million years ago in what is today France, and it had some unique features, such as a complex shell and defensive spikes. However, it was unable to retract and conceal its head as modern tortoises do.

Many groups of stem turtles lived during the Mesozoic, finding ways of surviving among the dinosaurs. But this diversity was practically wiped clean on account of the mass extinction, which stamped out 70 percent of life on Earth. Prior to the new study, palaeontologists used fossil evidence from South America and Oceania to show that only one stem group of land turtles managed to survive the K-Pg event, namely a group of horned turtles called meiolaniids. These creatures lived in Gondwana, now the southern hemisphere. Meiolaniids actually did quite well, with many species surviving until humans hunted them to extinction.

But as the new discovery shows, a completely different stem turtle from Laurasia, now the northern hemisphere, also managed to survive – one unrelated to the Gondwana stem turtles or modern European groups that survived the K-Pg event. Rather, L. relicta belonged to the Sichuanchelyidae lineage, which lived some 100 million years earlier during the Jurassic in what is now China and Mongolia.

Survival in the post-K-Pg world couldn’t have been easy, with animals having to cope with toxic atmospheric effects and the annihilation of pre-existing ecosystems, including massive die-offs of vegetation. Many terrestrial survivors – none of which were larger than a cat – eked out an existence by foraging on the detritus left over from the mass death. As a stem species, L. relicta may have been a throwback to a more primitive time, but it was still adaptable and flexible enough to survive post-apocalyptic Laurasia.

However, the “reason why Laurasichersis survived the great extinction, while none of the other primitive North American, European or Asian land turtles managed to do so, remains a mystery,” said Pérez García in a press release.

The survival strategies of this animal aren’t known, but the presence of L. relicta in France shows that its ancestors had successfully moved from Asia, occupying an ecological niche formerly held by European Mesozoic stem turtles, according to the study. 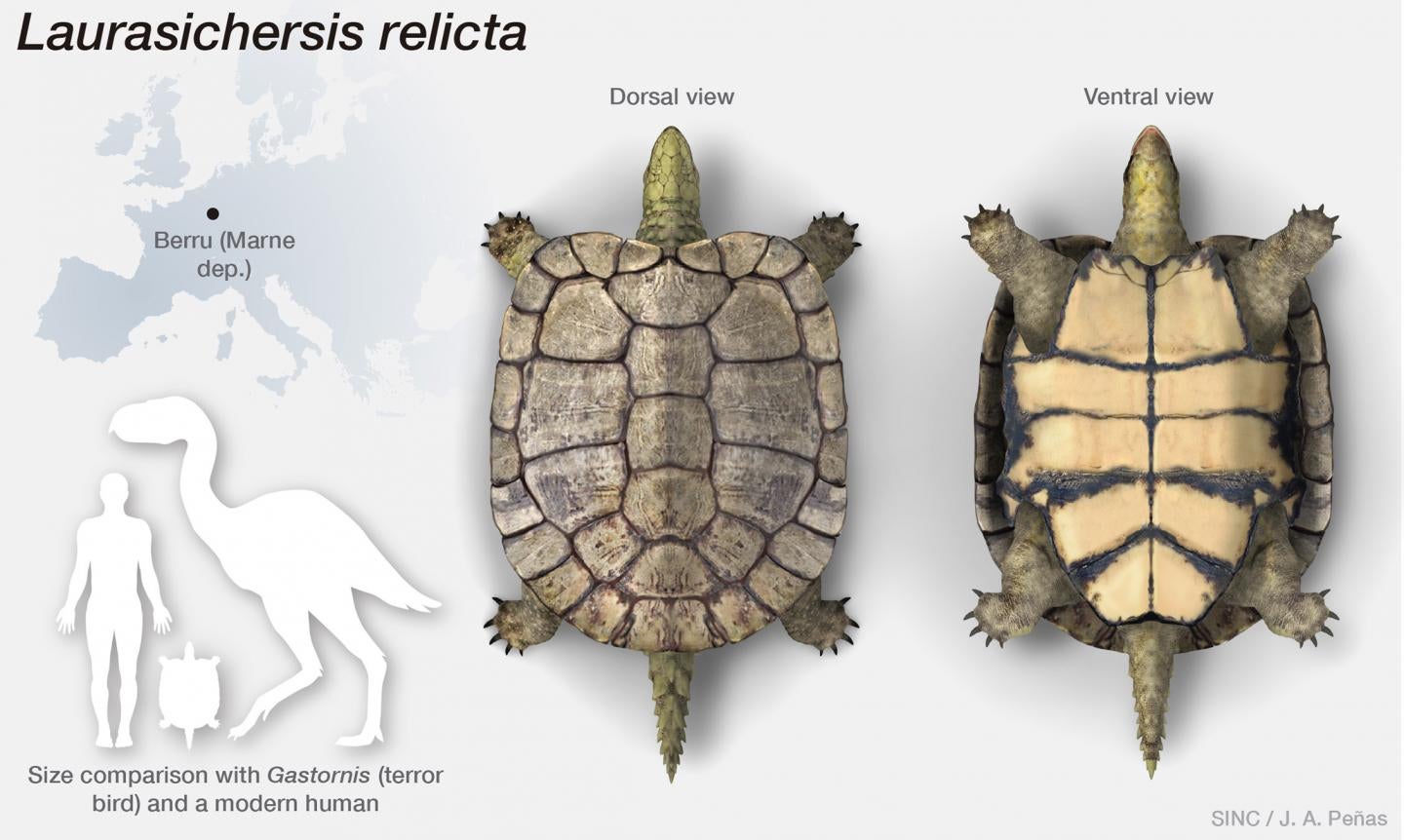 Fossils of L. relicta were found in a quarry in Mont de Berru, France. Pérez-García analysed over 70 different specimens for the study, which mostly consisted of various bits and pieces. The source layer from the quarry dates back to the upper Thanetian (upper Paleocene) of Europe, which lasted from 59.2 million to 56 million years ago.

Analysis of its fossilised shell, limbs, and skull suggests adults were around 60 centimetres (23.6 inches) long. Like other stem turtles, L. relicta could not retract its neck to hide its head from predators, but it had other defences, such as a heavily armoured shell and hard spikes on its neck, legs, and tail.

Its shell was also unusual, as it was made up of numerous plates; the underside of L. relicta’s shell exhibited “a greater number of these elements than those known in any other turtle,” said Pérez García, who referred to the species as “bizarre” in the paper.

Sadly, these are the only known fossils of L. relicta, so it’s impossible to know how long these resilient turtles lasted before finally going extinct. Hopefully more fossils will be found, along with evidence of other creatures that survived Earth’s most famous cataclysm.