Polar bears are basically mascots of the environmental movement owing to the risks the climate crisis poses to them. And folks, they’re doing really, really badly!

In a new study published in Ecological Applications, researchers looked into all the ways polar bears are struggling to grow and reproduce because of a massive decline in the sea ice habitat they need to survive. The study focused on polar bears living along Baffin Bay, which sits between Greenland and Canada.

The Arctic has warmed twice as fast as the rest of the world, and it’s having a major effect on sea ice there. The extent of sea ice has declined by 13 per cent each decade since 1979. Ice is also forming later in the fall and breaking apart earlier in the spring. Those factors are making it really hard for polar bears to eat and to make and raise babies.

To assess the bears’ health, the researchers examined how fat the animals were because fat bears are generally healthy bears. They found that less ice meant less healthy bears. That’s because polar bears rely on ice to travel long distances in search of seals to eat. But increasingly, there’s no ice around for the bears to walk on, so they’re spending more time on land where there’s a lot less access to food. All told, the study found bears spent a month longer on land in the 2000s compared to the 1990s. There was also a corresponding month-long ice-free period on Baffin Bay over the same period. 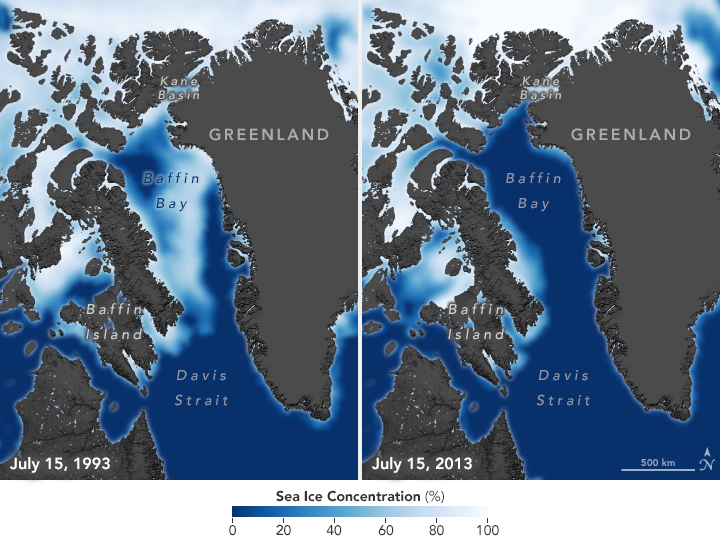 “When the bears are on land, they do not hunt seals,” Kristin Laidre, an Arctic ecologist at the University of Washington who worked on the study, said in a statement. “They have the ability to fast, but if they don’t eat for longer periods, they get thinner.” 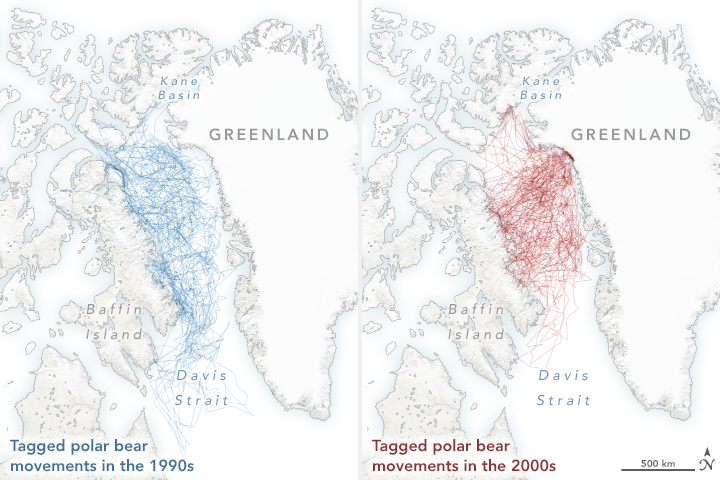 The movement of tagged polar bears mapped shows a shift from the 1990s to the 2000s. (Image: NASA Earth Observatory)

Pregnant polar bears also use sea ice to make themselves maternity dens (which I’m sure are less Pinteresty than they sound) to fast and give birth. But increasingly, bears who just gave birth are emerging from those dens in a really unhealthy state because they don’t have enough fat stored up to handle the extended eight month fasting period that comes with reproduction. That means sick and weak parents are being forced to care for children without much food around. And with sea ice continuing to decline, scientists expect this trend in sickly bears with less access to food is only likely to get worse.

This is awful news for polar bears, but it’s also bad news for other life on Earth. Ice melting is causing sea levels to rise, which threatens food security and the lives of millions of people in coastal cities. Rising seas will affect those who don’t live on coasts, too.

“Polar bears are a harbinger for the future,” said Laidre. “The changes we document here are going to affect everyone around the globe.”