Our planet recently adopted a mini-moon that’s roughly the size of a car, though astronomers aren’t sure yet if it’s an asteroid or an artificial object. An observatory in Hawaii is now providing us with a clearer view of Earth’s intriguing new – yet temporary – celestial companion.

The new colour image was captured on 24 February 2020, by the Gemini Observatory, which is located atop Hawaii’s Mauna Kea volcano, according to a press release issued by the NSF’s National Optical-Infrared Astronomy Research Laboratory. The mini-moon, if that’s what it is, measures between 1.9 and 5 meters (6.2 to 16 feet) in diameter, and as the new photo suggests, it’s actually quite spherical.

The new image is a colour composite produced from three different images. The object, unlike the streaking background stars, is not blurry because it was the focal point of the observations. The stars, shown in streaks of blue, red, and green, are trailing due to the object’s motion over time. A zoomed-in view of the photo (below) reveals the object in more detail. 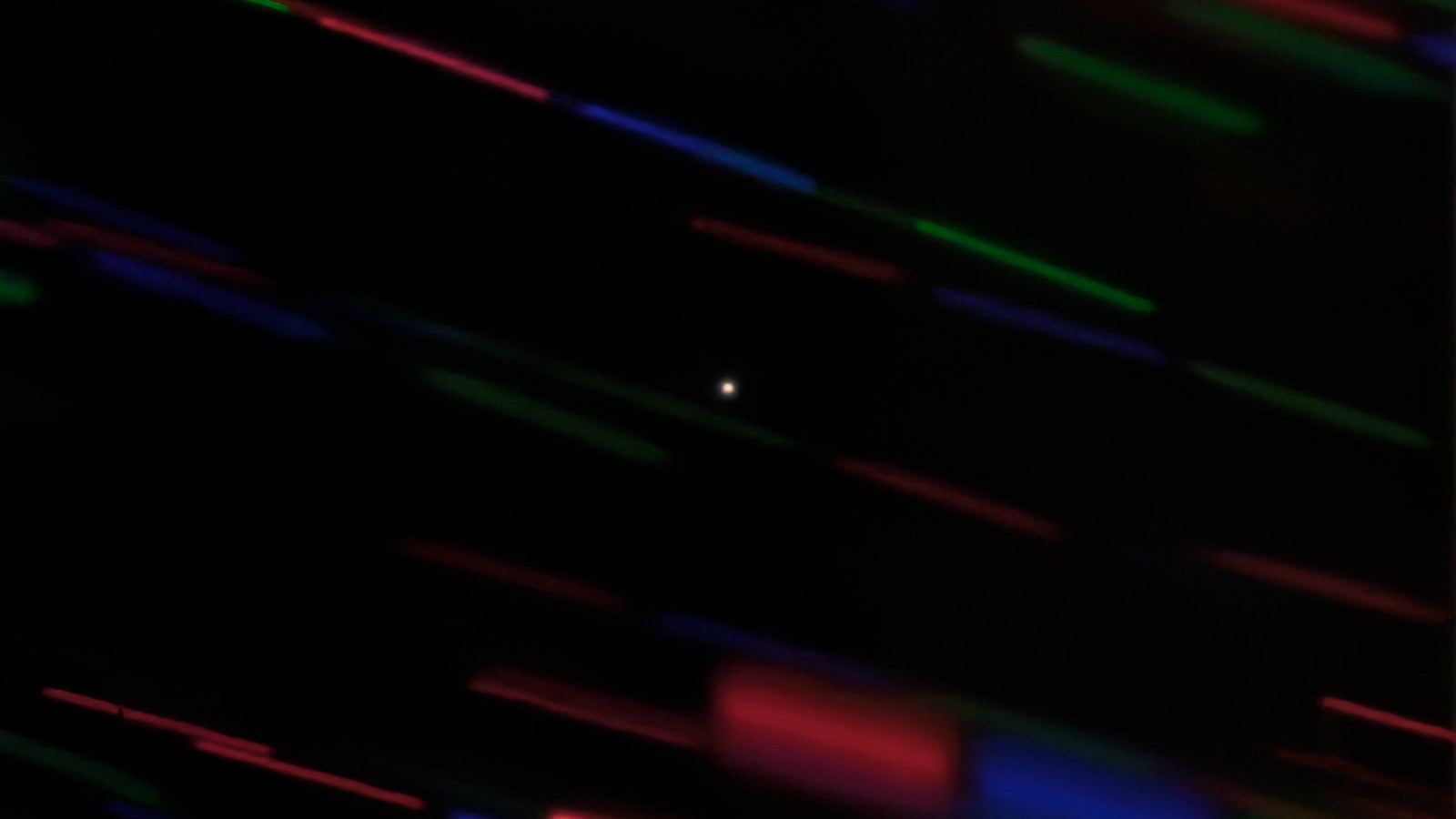 “Obtaining the images was a scramble for the Gemini team because the object is quickly becoming fainter as it moves away from Earth,” said John Blakeslee, Head of Science at the international Gemini Observatory, in the press release.

The object, a likely Temporarily Captured Orbiter (TCO), was assigned the provisional designation 2020 CD3 by the International Astronomical Union’s Minor Planet Center earlier this week. The alleged mini-moon was detected on 15 February 2020 by astronomers Kacper Wierzchos and Teddy Pruyne from the Catalina Sky Survey at the University of Arizona’s Lunar and Planetary Laboratory. The object is believed to have entered into Earth’s orbit back in 2018, but it won’t stick around for long.

“The object’s projected path will escape the Earth’s gravitational pull in April 2020,” Pruyne told Gizmodo in an email. “The term ‘mini-moon’ is simply a nickname given by astronomers. In reality it is just a visitor stopping momentarily on its voyage through space.”

The object is very small and faint, so astronomers can’t tell if it’s a natural object, like an asteroid, or an artificial object, such as a discarded rocket booster or some other form of human-made debris. If it’s proven to be a TCO, however, it would only be the second known mini-moon to be documented by astronomers, the other being 2006 RH120, which temporarily orbited Earth from September 2006 to June 2007.

“This is incredibly rare,” said Pruyne. “It’s rare because, for an object to maintain Earth’s orbit as a TCO, it has to come in at a very specific velocity. Otherwise it will fly past Earth or, less likely, impact.”

Initial images provided by Pruyne and Wierzchos were very grainy, but the new Gemini Observatory is offering some more detail, though still not enough to characterise the object as being natural or artificial. Ongoing observations are needed to better refine its position in space and to measure its reflectivity, which will help to constrain its size and even shed light on its chemical composition. Rocky bodies are less reflective compared to, say, spent rocket boosters or defunct spacecraft.

“Over the next few weeks, many in the astronomy community will likely be observing 2020 CD3,” said Pruyne. “From there we confirm all we can about the object – how long it’s been in orbit, where it came from, and the [materials it’s made from]. And since this is only the second TCO, lots can be learned about the physics behind it.”